A stack of East Noble state T-shirts sits in the Cole Auditorium box office shortly before being sold out. 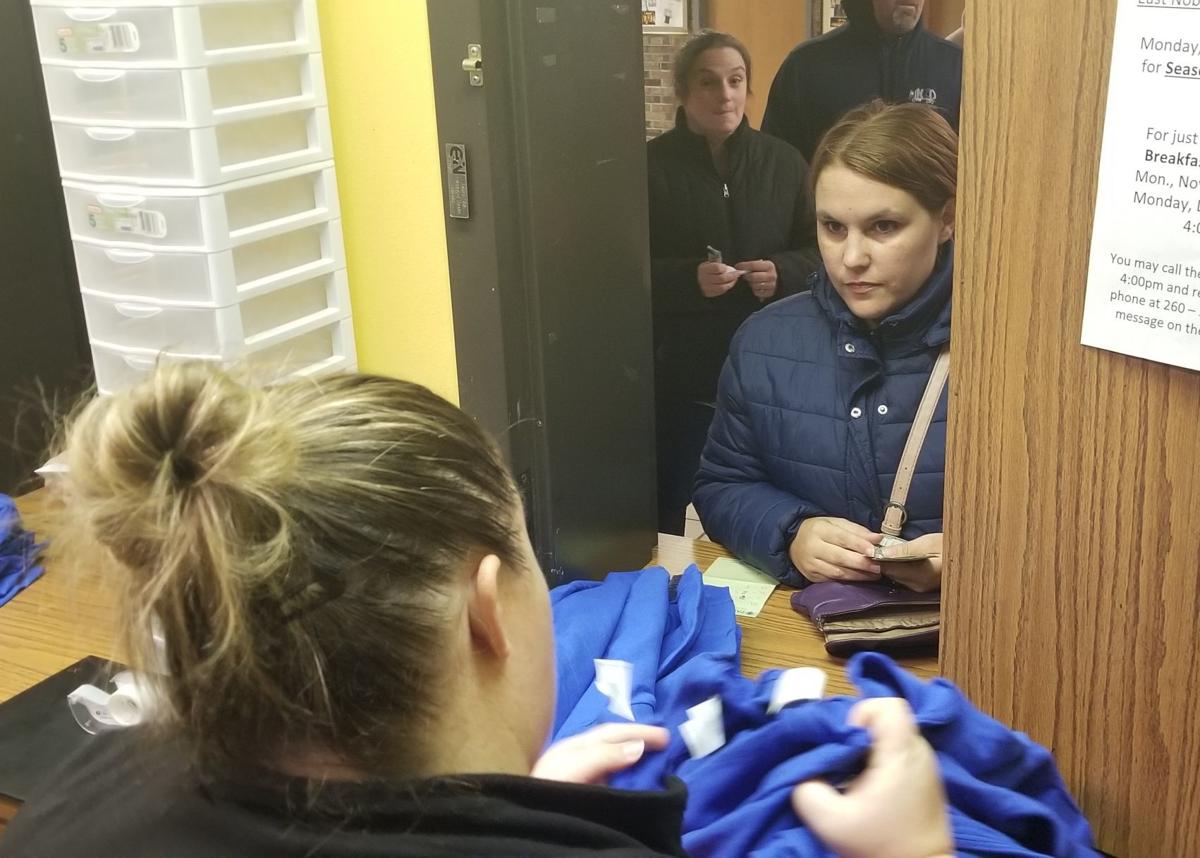 A long line snaked through the Cole Auditorium lobby Wednesday as fans came out to buy East Noble state football T-shirts. Many people left empty-handed, as the stock of 500 shirts sold out in about 15 minutes.

A stack of East Noble state T-shirts sits in the Cole Auditorium box office shortly before being sold out.

A long line snaked through the Cole Auditorium lobby Wednesday as fans came out to buy East Noble state football T-shirts. Many people left empty-handed, as the stock of 500 shirts sold out in about 15 minutes.

KENDALLVILLE — Black Friday is tomorrow, but Kendallville got a little early taste of the ravenous shopping spirit as fans descended on the Cole Auditorium to get their hands on state football T-shirts.

In only about 15 minutes, the stacks of 500 blue T-shirts were completely wiped out.

Oh, and that came a day after the school sold 1,500 game tickets in less than eight hours.

In miserable cold, rain and high winds blasting the East Noble campus, fans formed a line more than 30 people deep outside the auditorium lobby doors waiting for the sale to start at noon.

As soon as the doors opened and they made their way to the dual windows of the Cole Auditorium box office, it was immediately clear at $10 per shirt that demand was way, way, way higher than supply.

Fans lucky enough to get in line early came with big orders, taking sometimes more than 10 shirts for family and friends.

Smalls were sold out after what seemed like the first five customers. Mediums quickly followed. The small supply of 3XLs went next. Then, in just about one gasp a few minutes later, the larges, extra-larges and double-extra-larges all were gone.

A line of dozens dispersed out the door empty-handed.

By 12:15 p.m., people rolling up in the parking lot were being told to head home because there was nothing left to buy. They came far too late for this sale.

East Noble High School English teacher and Evening of Theater Director Darren Sible, who was working the box office Wednesday, said 600 shirts were all the district could gets its hands on from a supplier during the abbreviated Thanksgiving holiday week.

One hundred of those shirts went to students who bought tickets to take the fan buses down to Lucas Oil Stadium. The other 500 were put up for sale.

Sible said East Noble doesn’t expect to get any more shirts in before Saturday’s game, so the box office won’t be open for T-shirt sales on Friday as originally planned.

East Noble Activities Director Nick David tweeted shortly afterward that more shirts will be available for sale after Saturday’s game if people still want to get their hands on one to remember the 2019 trip to state, as well as some other designs.

“Don’t worry fans, after this weekend we will do an online store where you may purchase the t-shirt that sold out and other options as well,” David tweeted.