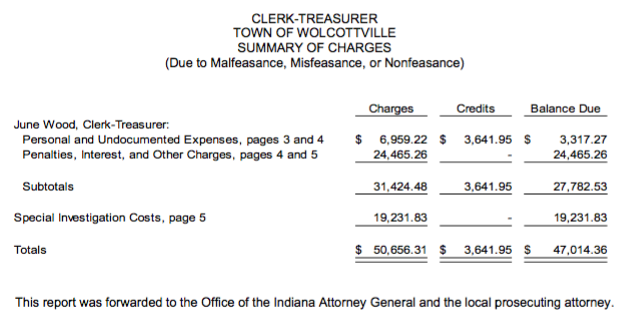 This chart from the Indiana State Board of Accounts audit of Wolcottville Clerk-Treasurer June Wood details money the state says she owes resulting from either misuse or professional errors made since Jan. 1, 2015.

INDIANAPOLIS — The State Board of Accounts has released a special report detailing an audit it conducted into the office of Wolcottville’s clerk-treasurer, and the state agency is now requesting that Wolcottville Clerk-Treasurer June Wood repay more than $47,000 the state claims she owes the town and the state of Indiana.

Wood is being asked to reimburse Wolcottville for what the SBOA said were several unauthorized expenditures, more than a dozen undocumented payments and penalties and interest assessed Wolcottville by the IRS due to “errors” the clerk-treasurer made while processing payroll taxes. The SBOA also is also asking Wood reimburse the state the cost of conducting that audit.

The report, released on March 5, was published to the SBOA website.

Wood was charged with two counts of theft in LaGrange Superior Court in January in relation to incidents where she allegedly used town money to pay for personal expenses.

The SBOA starting looking into the Wolcottville Clerk-Treasurer’s office last year after it received some information suggesting there were problems with the town’s books. The SBOA is the state agency charged with ensuring the financial accountability of state and local government.

The SBOA audit examined the Wolcottville Clerk-Treasurer’s financial books from Jan. 1, 2015, through March 31, 2018. A SBOA representative said the state will conduct an additional regular audit of the town’s finances later this year at the end of Wood’s term in office.

According to the 11-page report released by the SBOA, investigators tasked with the preliminary audit of the town’s books discovered at least 30 financial discrepancies in the Wolcottville Clerk-Treasurer’s office.

The report is divided into several sections. In a section titled “Personal and Undocumented Expenses,” state auditors concluded that Wood, using either the town’s checkbook or its debit card, “made 12 payments totaling $4,050.84 for expenses that were personal in nature for June Wood, Clerk Treasurer.” Investigators also found at least 25 debit card payments made by Wood it alleged were unsupported by any documentation.

“As Clerk-Treasurer of the Town, Wood was responsible for all disbursements made from Town funds,” the report stated.

The state requested Wood reimburse the town $6,959.22 to cover the cost of those personal and undocumented expenses.

In a section of the report titled “Penalties, Interest and Other Charges,” the SBOA indicated Wood made more than a dozen “errors” while preparing federal tax payments to the Internal Revenue Service.

The SBOA report also showed Wolcottville originally had been assessed IRS penalties of $60,133.56 and charged $5,891.80 in interest. But the federal agency reduced or removed some of those penalties and interest charges, lowering the town’s bill by almost $40,000.

The SBOA is asking Wood reimburse the town $24,465.26 for penalties, interest and other charges incurred by the Clerk-Treasurer’s office.

The state calculated its cost at $19,231.83 to conduct an investigation into the Wolcottville Clerk-Treasurer’s office. It is asking that Wood repay money that as well.

Wood is covered by a $60,000 bond, a requirement for any public office holder in a financial position.

At one point during their investigation, SBOA auditors called in Indiana State Police investigators who opened their own investigation of the Wolcottville Clerk-Treasurer.

The first theft charge alleges Wood wrote a check for $2,000 to herself for home office rental without authorization from the members of Wolcottville’s town council.

Wood’s attorney in those matters, Steven Clouse, Albion, waived Wood’s initial appearance in the LaGrange County Superior Court. An omnibus hearing on the matter is scheduled for April 15.

Wood’s term as Wolcottville Clerk-Treasurer expires at the end of this year. According to the LaGrange County Clerk of Court election office, no one has signed up to run for that office.

The full SBOA report can be found online at in.gov/sboa/WebReports/B52254.pdf.