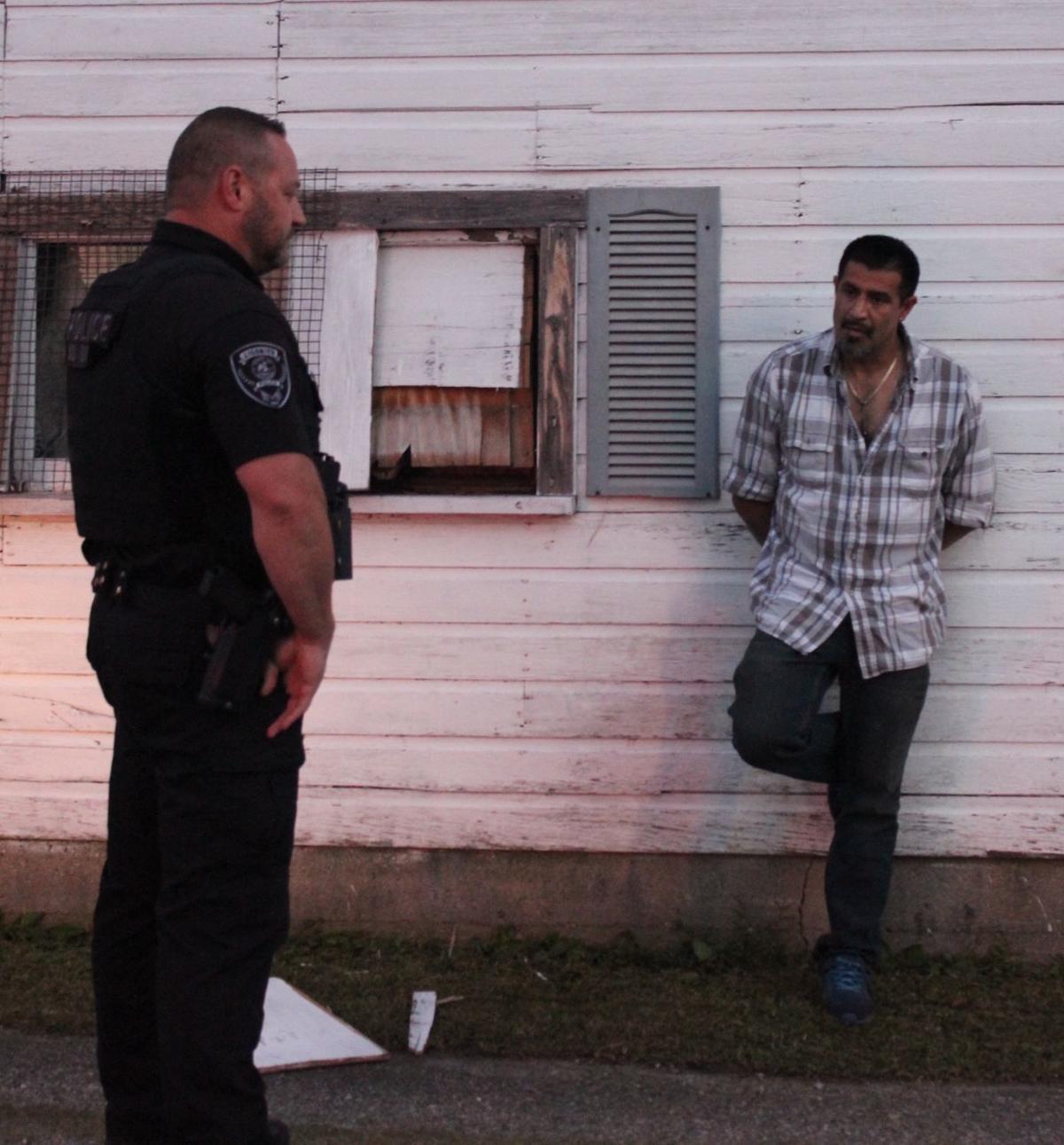 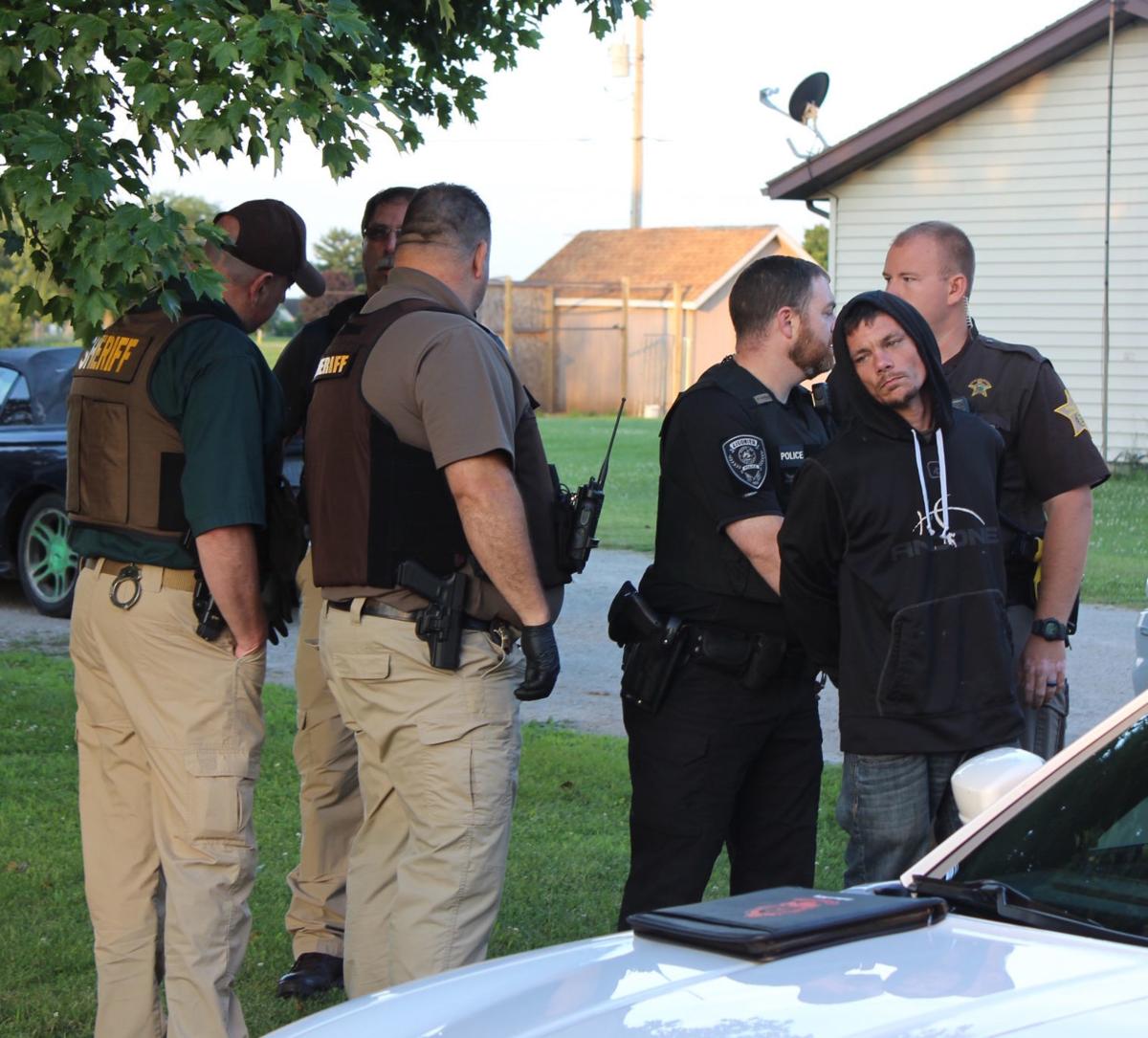 Tony J. “TJ” Skaggs is about to be placed into a police car following his arrest July 8 on drug charges.

Tony J. “TJ” Skaggs is about to be placed into a police car following his arrest July 8 on drug charges.

• Tony L. Skaggs, 52, of Wawaka was charged with conspiracy to commit dealing in methamphetamine, a Level 2 felony;

• Kursty L. Fugate, 31, of Ligonier, was charged with conspiracy to commit dealing in methamphetamine, a Level 2 felony; and neglect of a dependent, a Level 6 felony; and

• Bradley D. Davis, 34, of Albion, was charged with conspiracy to commit dealing in methamphetamine, a Level 2 felony.

“They had well-defined roles,” Mowery said Tuesday. “They were certainly able to tell us what their roles were.”

The conspiracy charge was filed because “they all agreed to sell drugs, and took various steps toward accomplishing that goal,” Mowery said.

According to court documents filed in the case, Tony L. Skaggs allegedly admitted to detectives that he would drive a companion to South Bend to purchase a pound of methamphetamine roughly once per week. Skaggs said he received between $300 to $500 each trip, but said he “doesn’t touch the dope.” Skaggs denied any further involvement.

Hasse, court documents allege, was in control of the money.

Hasse allegedly told investigators she had been dealing for more than a year. She said she got involved in dealing methamphetamine so her son, Tony J. Skaggs, would “stop cooking meth.” She allegedly said she had been “in charge” of the operation until her mother died in March 2019, at which point “T.J.” became in charge. She allegedly said Tony L. Skaggs received methamphetamine for the same wholesale price of $250 per ounce.

Fugate allegedly told investigators that she and Davis distributed methamphetamine together at times, and that Davis “distributes on his own at times.” She also said that the unnamed companion gave methamphetamine for her mother (Hasse), her father and Tony J. Skaggs for distribution.

Davis allegedly told investigators he would drive Fugate to meet up with individuals and distribute methamphetamine. He said the dealing would take place at one individual’s house “every day.” Davis said he was compensated for his driving by getting “high for free.”

Mowery said initially, investigators believed only one or two of the family members were involved in the sale of illegal drugs.

“They all were,” Mowery said. “They just had varying roles. It was far more than we had anticipated seeing.”

At approximately 5:30 a.m. July 8, the Indiana State Police SWAT Team executed a search warrant at 1015 W. Third St., where the five were taken into custody.

Hasse and three minor children were located sitting on a bed in Hasse’s upstairs bedroom. Police allegedly seized a pouch, located under the headboard, between the mattress and the wall, which contained approximately 40 grams of methamphetamine and several small, clean plastic baggies, digital scales and an amount of a green leafy substance that appeared to be marijuana.

Tony L. Skaggs and Tony J. Skaggs were located in the downstairs. Police allegedly located a cache of firearms, including rifles and handguns, located in a mechanical closet in the utility room/bathroom area. On top of the firearms was a black backpack, which allegedly contained methamphetamine, heroin, fentanyl and marijuana. One of the firearms had been reported as stolen to the Albion Town Marshal’s Office.

Fugate, Davis and a juvenile were located in Fugate’s bedroom. Methamphetamine, a large amount of small, clean, plastic baggies, several smoking devices, scales and hypodermic needles were allegedly recovered from that room.

Also on July 8, police executed a search warrant at the home of Pedro Macias, 407 Lincolnway West.

Police had allegedly attempted to make a controlled buy of methamphetamine from Macias at his home on July 3.

Macias, 46, allegedly stated he did not have as much methamphetamine as the purchaser wanted, but he could travel a couple of blocks away to one of his sources of supply, according to court documents.

Macias was followed to the residence at 1015 W. Third St., then returned to his residence where he delivered methamphetamine to the purchaser in exchange for $40, according to court documents.

Macias also had allegedly been documented selling methamphetamine on June 20, in an amount at least 5 grams but less than 10 grams.

Macias allegedly told investigators he “has been getting his dope” from an individual named “TJ” and “TJ” lives with “TJ”’s mom and sister, according to court documents.