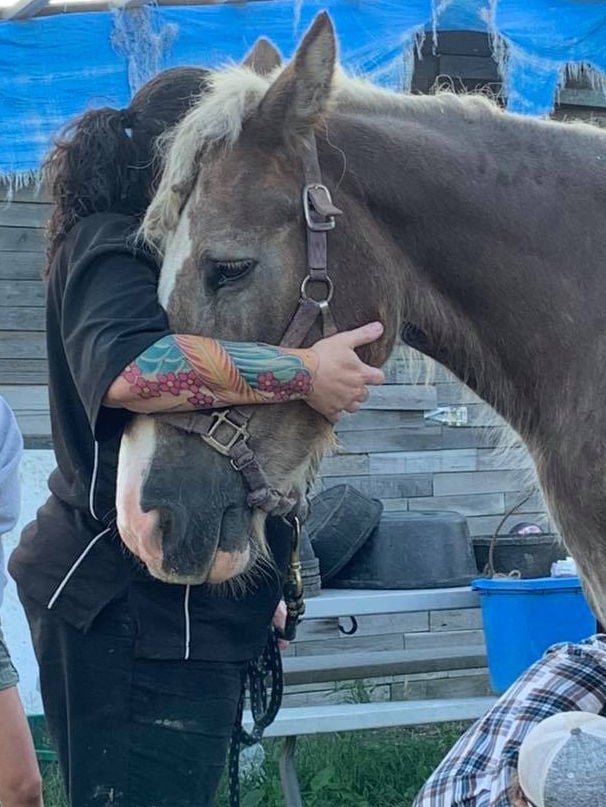 An Indiana Horse Rescue volunteer holds the head of a horse rescued from a LaGrange County family while a veterinarian tends to the animal’s wounds. The horse died about a month later due to its injuries. 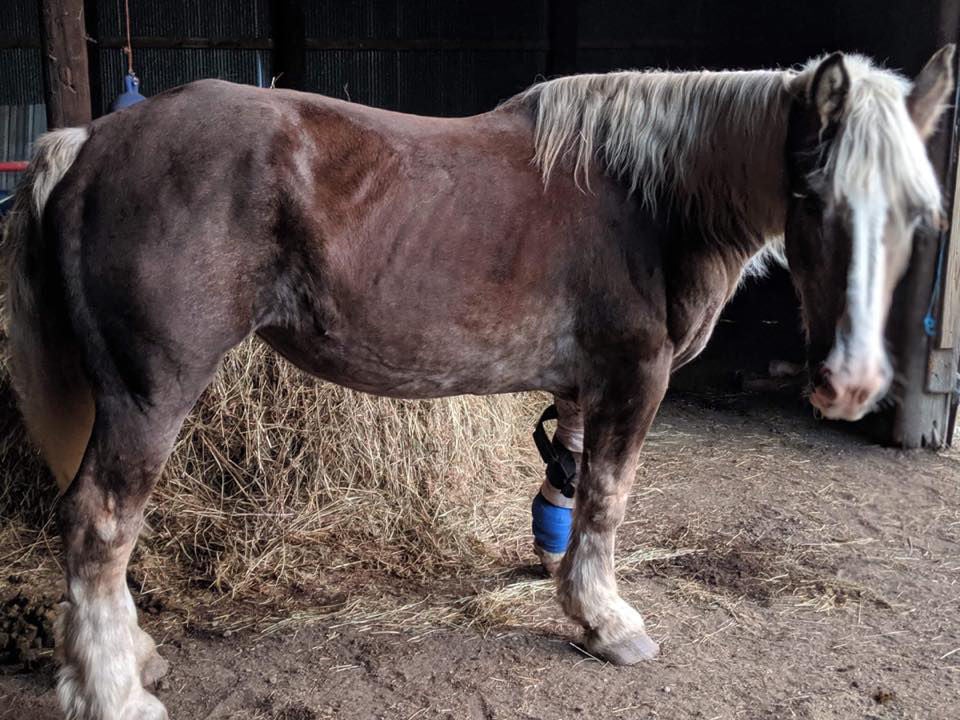 Mica, as she’s now called, stands in a barn at the Indiana Horse Rescue in Frankfort. The horse was taken from a LaGrange County farm because the LaGrange County Sheriff determined it wasn’t being properly treated for its wounds. The horse died Sunday as a result of its injuries.

An Indiana Horse Rescue volunteer holds the head of a horse rescued from a LaGrange County family while a veterinarian tends to the animal’s wounds. The horse died about a month later due to its injuries.

Mica, as she’s now called, stands in a barn at the Indiana Horse Rescue in Frankfort. The horse was taken from a LaGrange County farm because the LaGrange County Sheriff determined it wasn’t being properly treated for its wounds. The horse died Sunday as a result of its injuries.

LAGRANGE — An injured horse that was seized by authorities from a LaGrange County farm is said to be recovering at the Indiana Horse Rescue farm, and that man who owned that animal will likely face at least one charge of animal neglect, LaGrange County Sheriff Jeff Campos said Thursday.

Campos said he is wrapping up his preliminary investigation of a horse found at a farm owned in part by Larry Myers of Shipshewana. The farm is located at 3455 N. S.R. 9, about halfway between LaGrange and Howe.

The injured animal is now being treated for leg and chest wounds at the Indiana Horse Rescue farm in Frankfort. According to Cathryn Caldwell, director and president of Indiana Horse Rescue, the horse is thought to be about 13 years old and was suffering from deep lacerations to both of its front legs and a puncture wounds to its chest. She estimated that the wounds were at least a month old when the animal arrived at the horse rescue farm.

Caldwell said after just one week’s treatment, the horse, now called Mica, has responded well, but still faces a long road to recovery. Mica now gets weekly visits from the vet who tends to her wounds.

“It’s going to take two to four months for the veterinarian to get her where she’d be considered sound,” Caldwell said. “She is the kindest horse, so grateful, so loving, she knows she’s been rescued and she knows that she’s safe.”

Campos and Dr. Bruce Lamb, the local representative of the Indiana Board of Animal Health, seized the horse on Sept. 24. The horse was legally transferred to the horse rescue the following day.

Campos said Myers showed he and Lamb paperwork proving he’d purchased the animal in question injured only five days earlier, on Sept. 20, from the kill pen at a local horse auction. But the sheriff and Lamb determined that Myers was not providing the animal the proper medical care it required.

“Larry’s not a vet,” Campos said. “This horse had a leg that was swollen two to three times its normal size, and it was bleeding. The horse has at least two wounds – one was bandaged, one was not – and there was blood on its nose. It really wasn’t moving. It didn’t appear that it wanted to do anything. You could tell that horse was in pain.”

Campos said Myers told he was caring for the animal and pointed to the bandage on its leg, but also he’s hadn’t sought help from a veterinarian and wasn’t planning to.

“Doctor Lamb both agreed that horse was in pain and needed medical attention, and Larry wasn’t giving it the medical attention it needed,” Campos said. “He’d had the horse for five days. That’s when I decided I was going to take custody of the animal.

The horses Myers buys and sells and pastures on his farm have generated multiple complaints to law enforcement over the years. However, this is the first time Campos has seized an animal. Campos said a recent change in Indiana law made it easier for him to take the animal this time.

“We get calls about that place all the time,” Campos explained. “He (Myers) does always have water and hay for the animals, not so much grain, but he does have hay and water. It’s usually pretty fresh hay, too, nothing old and moldy. The vet and I always met out there, we met with Larry, and he’s always cordial and invites us out any time. But when I saw that horse in that condition, I became concerned and I knew something that to be done for that horse.”

Campos added the horses on Myers’ farm have generated a lot of complaints about animal neglect over the years and people on social media have accused the Sheriff’s office of not taking those complaints seriously.

“A lot of people don’t believe we go out there and investigate, but we do. You have to meet a certain threshold before I can act,” he explained. “Larry feeds those horses, he waters them, but he buys them in that condition from a kill pen. We’ve been out there many times and he always has hay and water. But this one was in bad shape and the vet and I didn’t think he was properly taking care of it.”

Caldwell said carrying for animals like Mica is not inexpensive, and her nonprofit organization will take donations from people willing to help. Indiana Horse Rescue maintains a Facebook page with more information.

So far, Mica seems to be beating the odds.

“You look in her eyes, she has a lot of life left,” Caldwell said. “Just the day after she arrived, when the man who feeds the horses went in to the barn, she was vocalizing, telling him not to forget she was there and she was hungry. That’s a really good sign.”

“Doctor Lamb both agreed that that horse was in pain and needed medical attention, and Larry wasn’t giving it the medical attention it needed. He’d had the horse for five days. That’s when I decided I was going to take custody of the animal."