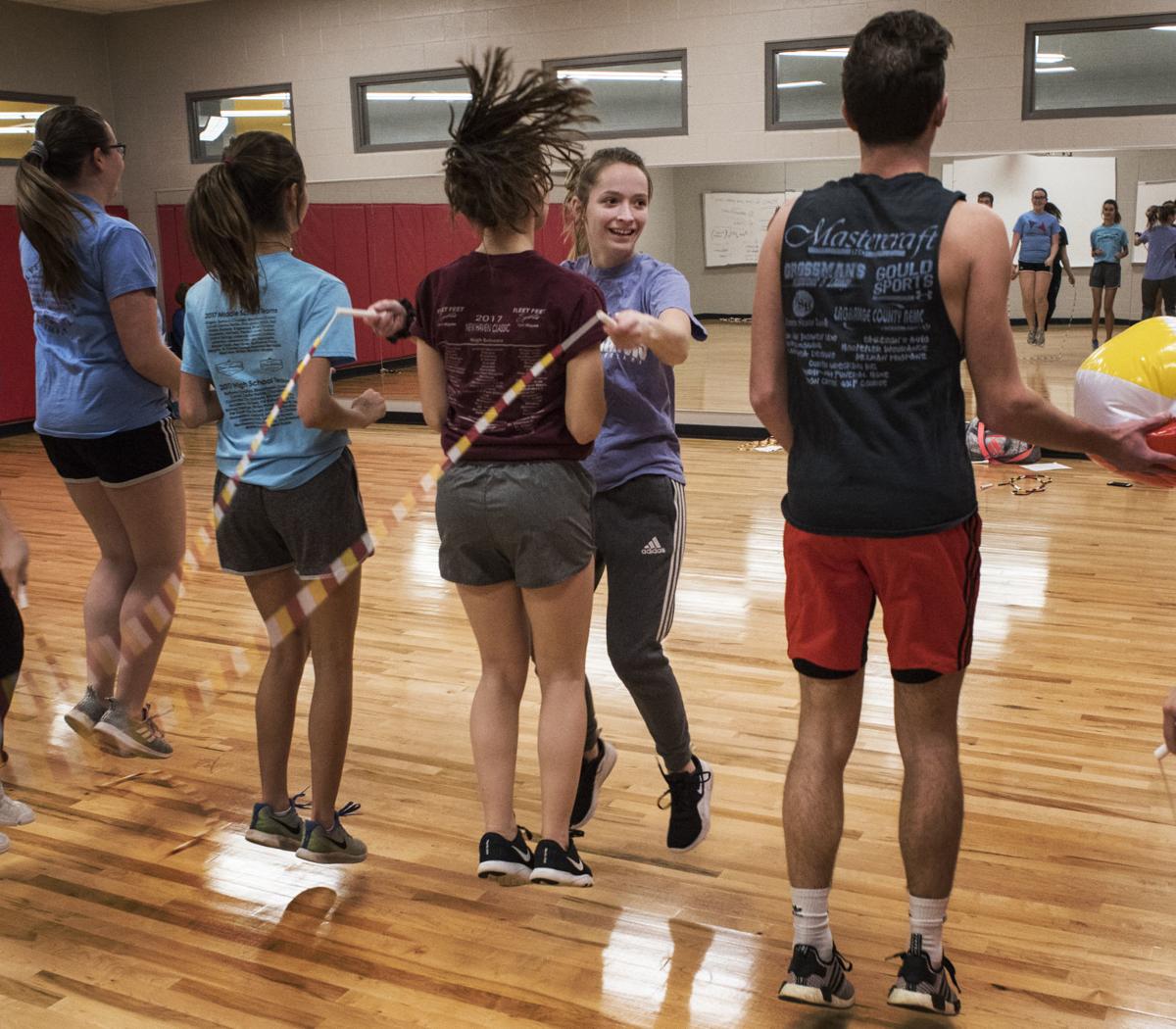 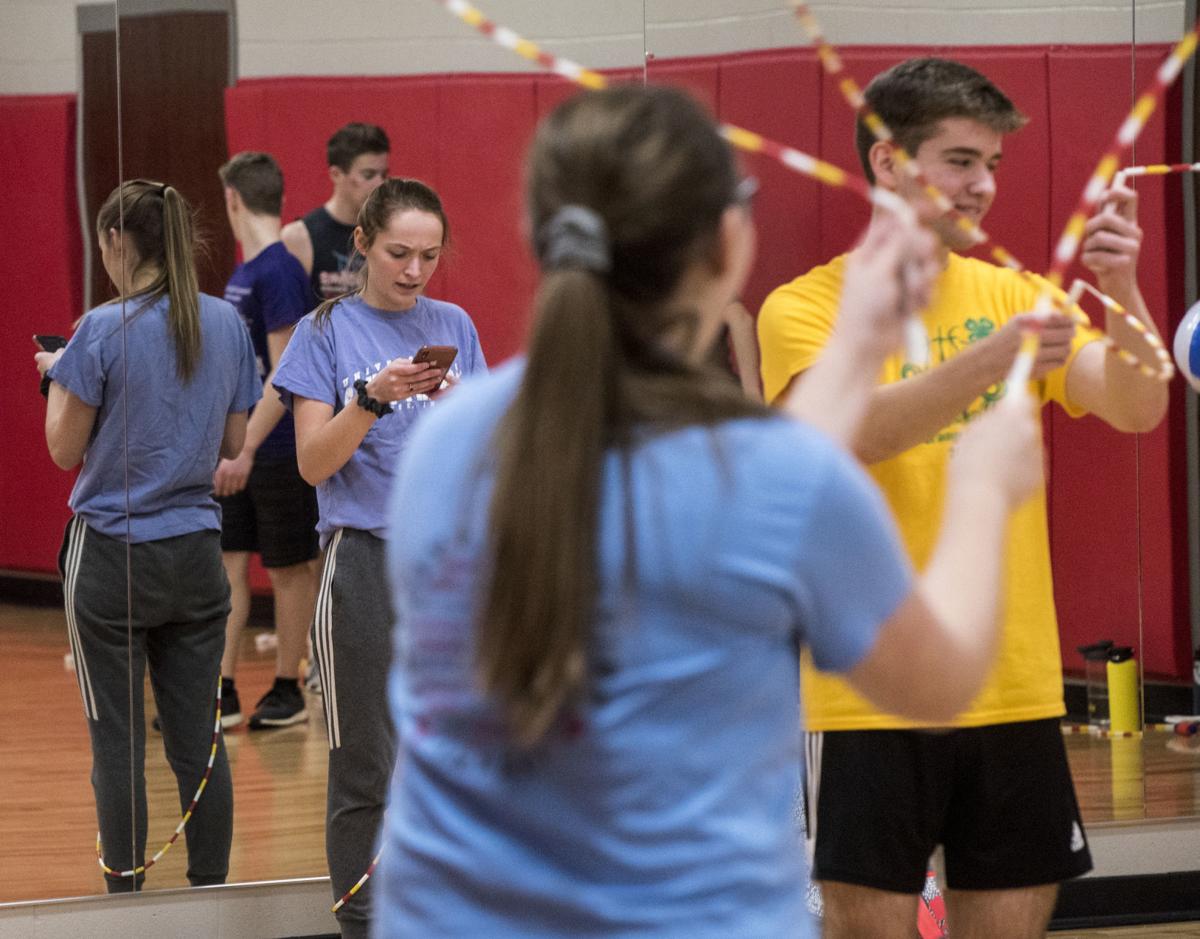 Allie Kruckeberg selects a piece of music for members of her Westview jump rope club to dance to as they practice their jump rope routines. 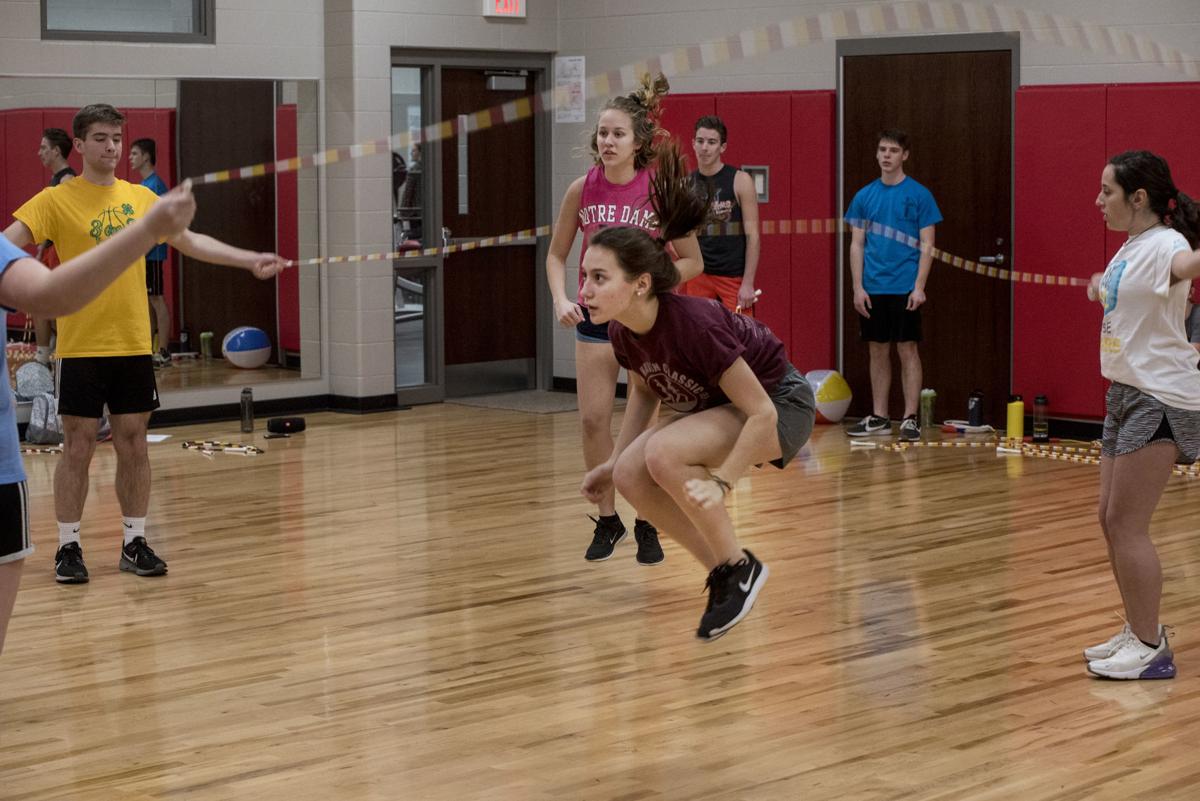 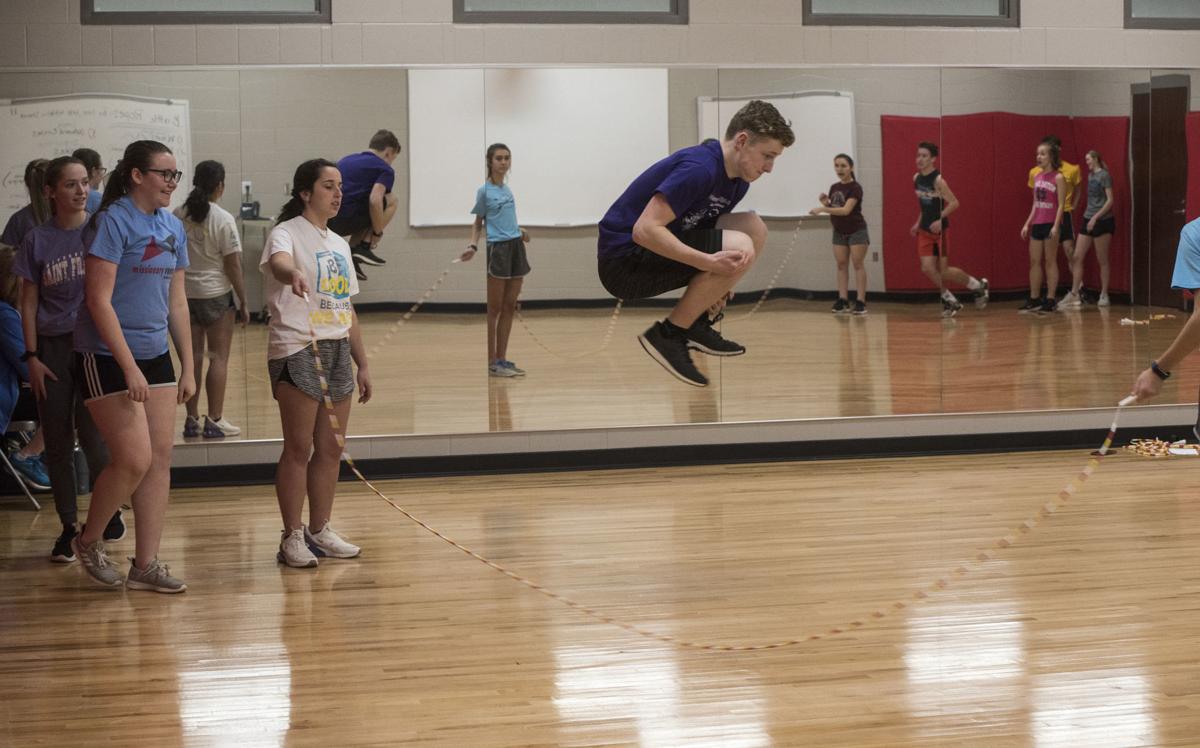 Allie Kruckeberg selects a piece of music for members of her Westview jump rope club to dance to as they practice their jump rope routines.

EMMA — Just off the Westview Jr./Sr. High School fitness center, in a smaller room with a hardwood floor, a group of about a dozen students are each working hard, honing their skills with a small, thin piece of rope.

Group member Stacy Stutzman is twirling a jump rope over her head. She watches her performance in a large bank of mirrors mounted to the wall in front of her. With a quick move of her wrists, she suddenly pulls the rope out of its orbit and aims it toward the floor. But as the rope whips down past her head, it cuts past her ear, grazing Stutzman as it goes.

She stops for a brief second, wincing in a little bit of pain. She then lightly touches her ear with her finger just to make sure it’s not bleeding. High energy jump rope, it turns out, is not a sport for the faint of heart.

“That happens,” Stutzman said, now smiling as she goes on with her routine.

She’s part of a group known as the Whippin’ Warriors, a jump rope club started two years ago at Westview by now-senior Allie Kruckeberg.

Kruckeberg acts as the group’s coach, its choreographer, and when need be, chief of inspiration. Jump rope at Westview is a club sport, run by the students but overseen by the school staff members. The students involved donate countless hours each winter season hoping to perfect the art of jumping rope.

There are no trophies in Westivew’s trophy case presented for their performance. No jump rope team photo hangs from a school wall. There are no competitions for this group, only performances. But that’s OK with the group.

Club members start training each year in November and wrap up in early March. This year about a dozen kids signed up. Many of those involved use it as a way to stay in shape between fall and spring sports.

Kruckeberg brought jump rope to Westview after her family moved to LaGrange County from the Fort Wayne area. Kruckeberg grew up near New Haven, attending a private school there, where she was introduced to the world of competition jump rope at age 8. Two years ago, as Kruckeberg was preparing to start her sophomore year of high school, her family moved to LaGrange County. Kruckeberg enrolled at Westview and brought her passion with her.

“When I came to Westview, Mrs. (Heather) Eash, our sponsor, I had a class with her my sophomore year, and I brought up that I used to do this,” she said. “She said I’ll talk to Mr. Cory (the Westview High School principal) and maybe we’ll start a club.”

It’s not always been an easy sell. Kruckeberg admitted at times she had debates with other students whether jumping rope is a sport.

“It is a sport,” she said. “Some people might disagree but it’s definitely a sport. You have to be extremely athletic for this, it takes so much agility.”

There’s so much more to jumping rope than just swinging a rope and jumping over it as it passes under your feet. Many of the group’s routines are set to music and are choreographed. Almost every single rope trick features the entire group, using multiple ropes.

It takes time to perfect those routines. Lots and lots of time.

“We practice our routines over and over,”Kruckeberg said.

She acts as the group’s coach, teaching others most of the routines and tricks she learned while performing with the competitive club.

“I lead it and I come up with a lot of routines,” she explained. “This year, it has been a lot more of a group effort because I’m graduating in the spring. I’m trying to teach the younger ones how I do things and run things so they can do the same thing after I leave.”

“There’s so much more to this than just jumping over a rope,” Kruckeberg explained. “I love doing stuff with a single rope, single tricks, but we try to do a lot of group stuff, like double-dutch ropes and longer wheel ropes. We’re doing crazy things you’d never think you could do with a jump rope.”

That much practice brings with it the risk of injury, like shin splints and rope burns, common injuries in this sport.

“Those are just the worst,” she said.

Eash, a teacher at Westview and the club’s sponsor, said when she first heard Kruckeberg talking about her days as a competitive jump roper, she thought forming a Westview jump rope club was just what the school needed.

“It’s so different than anything else most schools offer as an activity,” she said. “We are such a basketball-dominated school that jump rope seemed like something that would be great to offer for students who wanted something completely different and out of the ordinary to do. We have a really cool and unique team because they are athletic kids but they are also very musically talented too.”

Kruckeberg said the energy the club members feel from the crowds at those games pushes them to better their performances.

“I think they just love the fun energy we bring,” she added.

Last year, the group brought the May Day parade in Shipshewana to a standstill when they stopped and performed a short version of their routine. Crowds gathered three and four people deep to watch and wildly cheer the club members as they performed various rope tricks.

“That was so much fun. We love doing stuff like that,” Kruckeberg said, laughing.

In addition to performing at ballgames, the club visits local elementary schools, where they’ve built quite a following.

“We go to the elementary schools and do demos for them,” she said. “We usually show one of our performances and then pull the kids on to the floor and have them come jump with us, doing double-dutch and teaching them. It’s fun to watch their eyes light up.”

Several elementary schools now have their own jump rope clubs.

The Whippin’ Warriors’ next performance is during halftime of the Feb. 28 varsity basketball game. Many of the club’s performances are built around a particular theme. That night, club members will be performing a routine Kruckeberg described as a salute to Marvel comics.

Eash said she’s expecting the Whippin’ Warriors will be performing to a standing-room-only crowd at their next public performance. She said the group deserves that kind of attention considering how much hard work they put into perfecting their performances.

“I think they can draw such large crowds, and bring a gym full of people to their feet for a standing ovation, because, first, what they do is hard. It takes a ton of work and practice,” Eash explained. “Second, it’s unique. Jump rope is beginning to catch on at other schools, but honestly because Westview started it and other schools see what our team is doing. So people are amazed at the talent of the kids, the fun they have, the uniqueness of it, and because it’s something different each time we perform. We strive to give them a different show each time we perform. So the audience can’t wait to see what we have come up with.”

There’s so much more to this than just jumping over a rope. I love doing stuff with a single rope, single tricks, but we try to do a lot of group stuff, like double-dutch ropes and longer wheel ropes. We’re doing crazy things you’d never think you could do with a jump rope.”