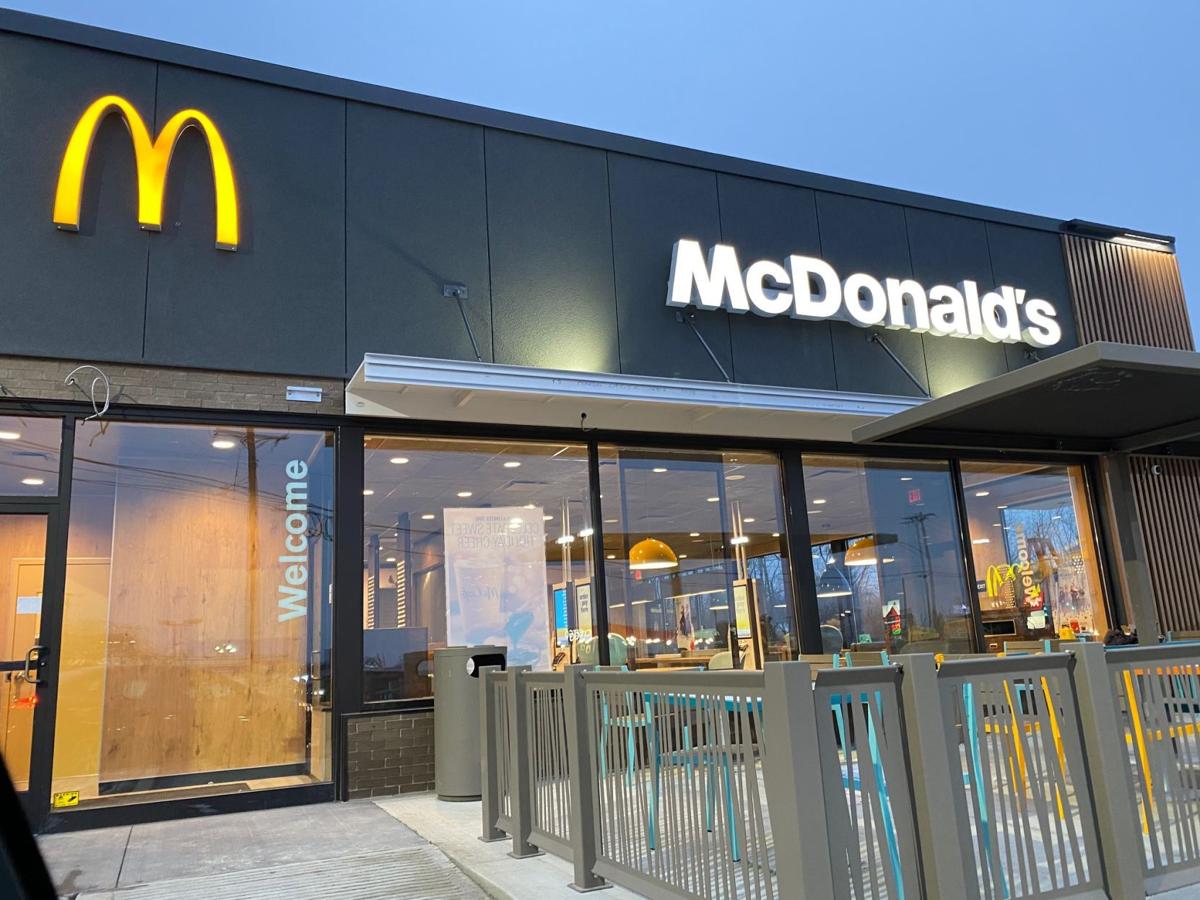 McDonald’s in Columbia City is pictured. That location was opened in November 2019 and a rebuild project at Kendallville’s McDonald’s taking place this summer will create a similar restaurant there on U.S. 6. 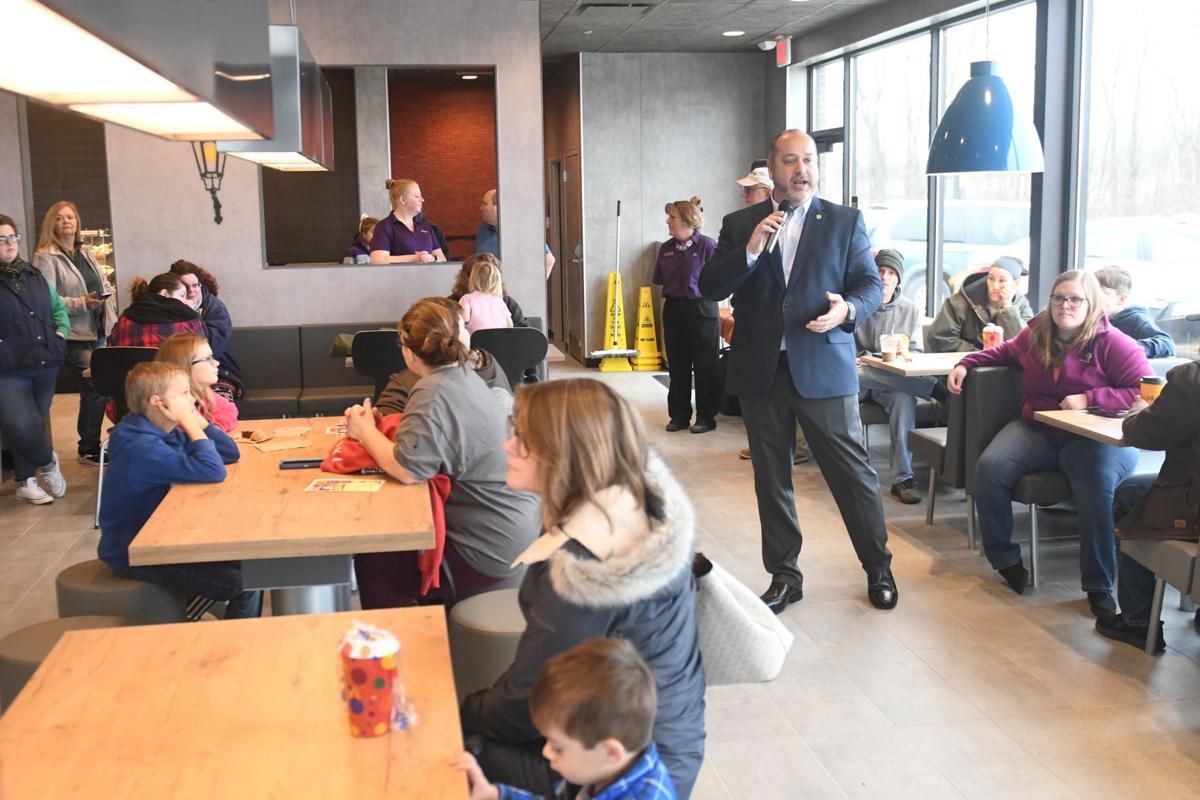 Brian Hedrick, operations manager for McOpCo, speaks to visitors of the opening of the new McDonald’s in Columbia City in this file photo from November 2019. Hedrick manages more than 30 restaurants owned directly by McDonald’s, including the location in Kendallville.

Demolition work began Wednesday at the rear of the Kendallville McDonalds. Crews removed the concrete pad around the drive-thru. Demolition of the building will take place in the coming days.

McDonald’s in Columbia City is pictured. That location was opened in November 2019 and a rebuild project at Kendallville’s McDonald’s taking place this summer will create a similar restaurant there on U.S. 6.

Brian Hedrick, operations manager for McOpCo, speaks to visitors of the opening of the new McDonald’s in Columbia City in this file photo from November 2019. Hedrick manages more than 30 restaurants owned directly by McDonald’s, including the location in Kendallville.

Demolition work began Wednesday at the rear of the Kendallville McDonalds. Crews removed the concrete pad around the drive-thru. Demolition of the building will take place in the coming days.

KENDALLVILLE — When Kendallville’s McDonald’s rebuilds this summer, the new restaurant should not only get a facelift for how the building looks, but also should provide a better — and ideally faster — service to hungry customers.

With demolition expected to start this week, McDonald’s on U.S. 6 is expected to be out of commission for about three months this summer as the company tears down and rebuilds the location from scratch.

But when it reopens — with a current target date for the fist week of August — customers should see a lot of modern touches on the formerly aged restaurant.

The Kendallville McDonald’s location is one of about 5% of stores nationally that is owned by the global corporation, and is part of regional operations group under the management of Brian Hedrick, U.S. McOpCo operations manager. Hedrick oversees 37 McDonald’s restaurants spanning across the Fort Wayne area — which includes Kendallville, Auburn and Columbia City — as well as some stores around Lafayette, Indianapolis and down into Louisville, Kentucky.

Most McDonald’s are owned and operated by individual franchisees — the Avilla location at S.R. 3 and Albion Road is one such store — but the company does maintain some direct ownership of some locations.

With Kendallville being one of those shops, the nearly half-century-old fast food joint was on the list of stores for an upgrade.

Hedrick said the rebuild was actually supposed to occur last year, but when the COVID-19 pandemic hit, McDonald’s put the brakes on rebuild projects. Kendallville’s branch was supposed to be reconstructed in 2020 along with a location at Stellhorn Road in Fort Wayne.

“Last year we were slated to do before the pandemic two rebuilds in one year,” Hedrick said.

Although McDonald’s originally said no rebuilds would take place, they did eventually go forward with the Stellhorn Road upgrade but pushed Kendallville back, as Hedrick said that location was in more immediate need of updates.

As the situation improved this year, McDonald’s greenlighted the Kendallville rebuild and the process has moved quickly. With some uncertainty about when it would actually start and the tight windows, Hedrick said there wasn’t much opportunity to advertise the upcoming project before the restaurant shut down for the construction.

The demolition of the current building and construction of the new facility is expected to take about three months — Hedrick said that’s a little longer than he anticipated but its due to some complications with power lines and other utilities at the Kendallville site that workers need to work around — but he hopes to have a grand opening around the start of August.

Kendallville will get a rebuild similar to what was done not only at Stellhorn Road in Fort Wayne but also at the Columbia City McDonald’s which was built new and opened in November 2019.

“It’s not going to look too much different than Columbia City in terms of the building. The process is we tear it down and rebuild another one and we want that to be as quick as possible because the city of Kendallville needs a McDonald’s,” Hedrick said.

The modern updates will go beyond just aesthetics and include energy-efficient LED lighting, new appliances in the kitchen and electronic kiosks indoors where people can punch in their own order and pay.

The restaurant will still have its standard counter and cashier for those who want a more traditional ordering process, but the restaurant will also have a dedicated curbside pickup location and a delivery window for pick-up orders for services like DoorDash or Uber Eats that don’t currently offer service in Kendallville but might in the future.

“We’re setting it up for delivery even though delivery is not available in Kendallville yet,” Hedrick said. “We know DoorDash and stuff is going to be there, so we want to pick them up.”

One of the main goals of the upgrade for customers is to boost efficiency and boost speed, the “fast” in fast food.

Hedrick said people have the misconception that automated kiosks replace workers who might otherwise take an order at the counter, but in reality the order boards help McDonald’s relocate that staff to other positions in the kitchen, working drive-through or serving curbside customers.

Most of a McDonald’s business comes through the drive-through window anyway, so having more people in back cooking, assembling and filling orders should boost production at the restaurant.

“We have never replaced one job with a kiosk or automatic ordered, we’ve tried to create more jobs,” Hedrick said. “Ninety percent of business is drive-through. We converted that (register job) to someone out there delivering order to provide better services.”

When it reopens, McDonald’s will be looking for a big workforce, significantly more than it was running with before its closure this week.

Ideally, Hedrick said he’d like to have around 90 people employed at the restaurant, where it was running with around 40 employees previously. Like all local businesses, finding workers has been an ongoing challenge, so the company will be making a big hiring push this summer.

As for current employees of Kendallville, many relocated to other locations nearby. Hedrick said about 70% of the workforce are now helping out in Auburn — another company-owned location — while some have also joined staff in Fort Wayne.

A few workers have taken jobs at the Avilla McDonald’s, which is the same restaurant but is technically a different company since that one is owned by a franchisee and not McDonald’s directly, Hedrick said.

Some workers did decide not to transfer and are either taking the summer off or seeking other employment. Hedrick said he hopes come August most of the previous workforce will return to Kendallville and the location a core employee base familiar with the community.

Outside of the internal upgrades, Hedrick said the footprint of the building will be mostly the same size, although the dimensions have changed a little to make it a bit wider compared to longer. McDonald’s will be improved its back lot behind House of Spirits and turning that into large-vehicle parking for trucks, buses or vehicles with boats, trailers, etc.

Also an outlet on the east side of the building onto Kreuger Street next to Verizon will be moved back a bit to relieve some congestion that can occur with cars trying to get back to U.S. 6 from two different driveways.

The entrances, including the main “in” drive that drivers can’t easily access if they’re westbound on U.S. 6 due to a concrete median, won’t be changing, Hedrick said. Westbound drivers will either need to use one of the other entrances or U-turn at the light at S.R. 3 North and come back to the entrance heading east on the highway.

McDonald’s will advertise a grand opening when the restaurant is ready to reopen as it has with its other locations, giving customers a chance to celebrate the return and try out some of the new features of the restaurant.