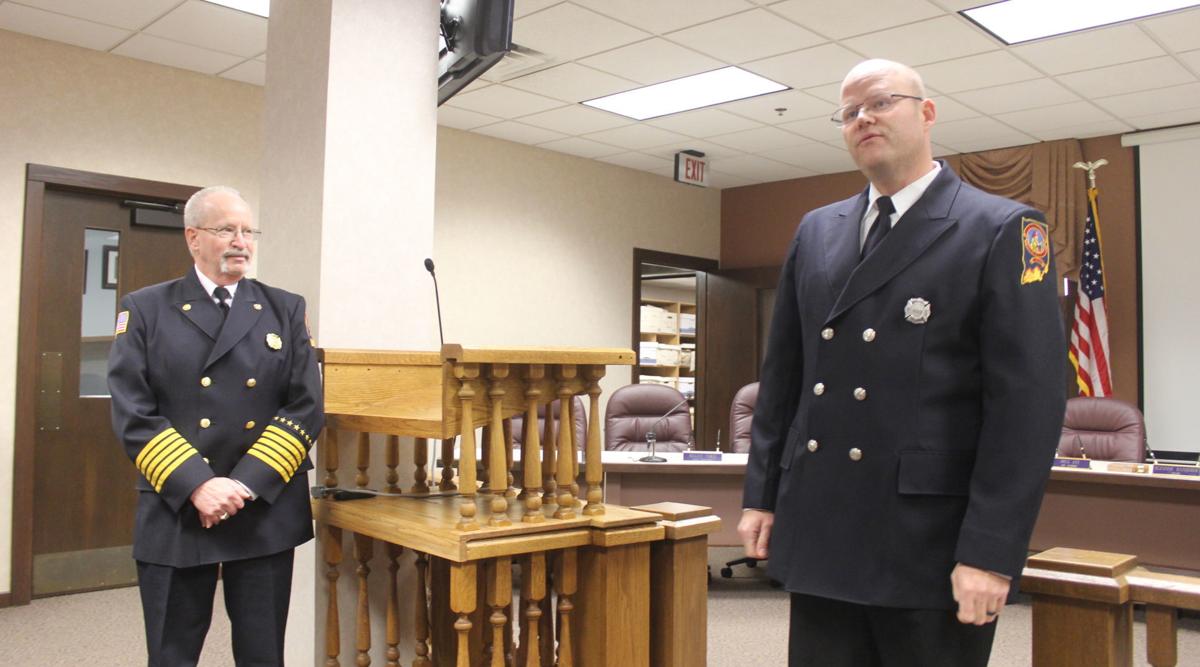 Jeremy McKinley, right, speaks in the Kendallville City Council chambers after being introduced as the new Kendallville Fire Chief starting in 2020. He’s joined by outgoing Fire Chief Mike Riehm, who is retiring after 43 years of fire service. 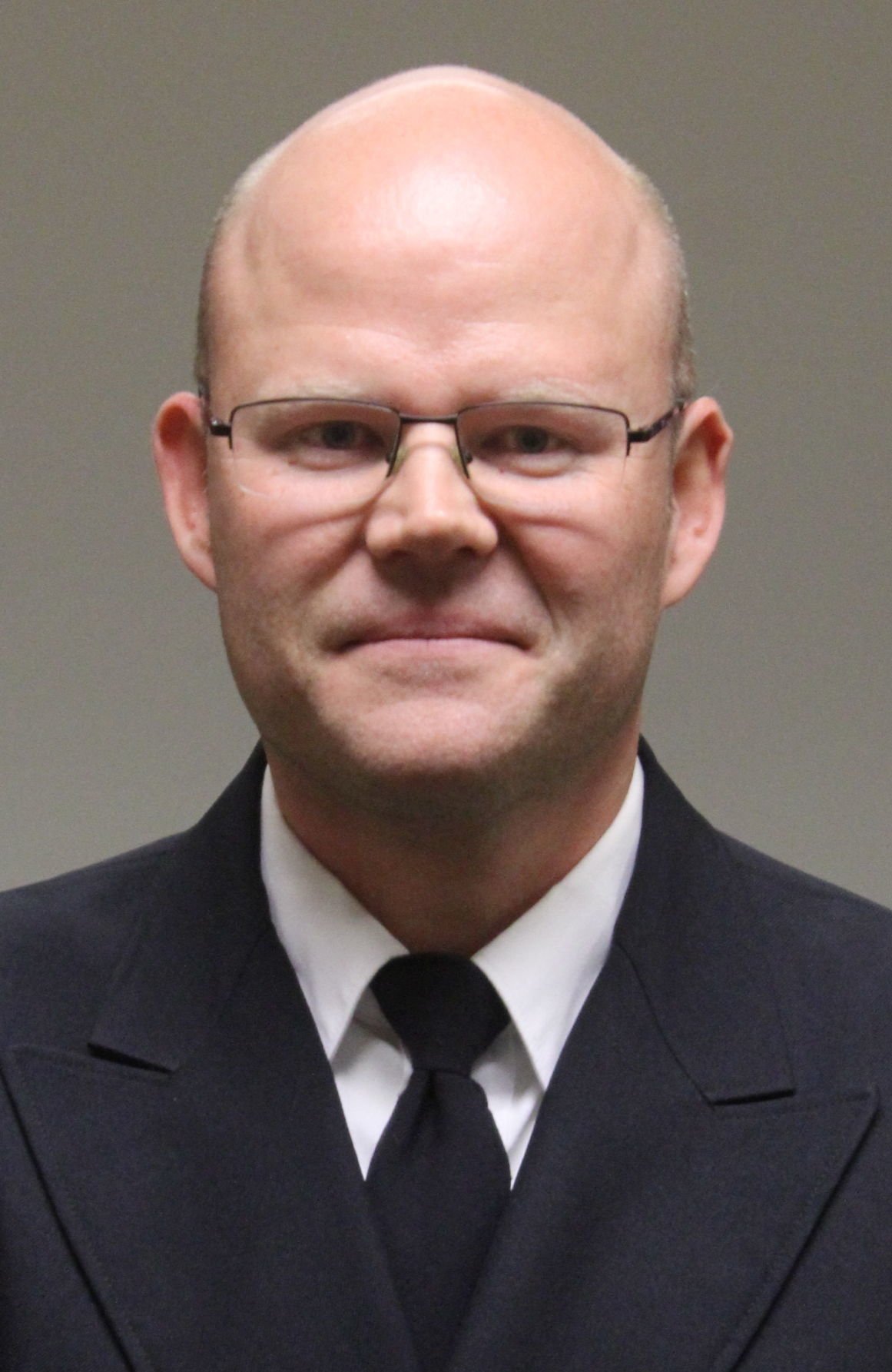 KENDALLVILLE — Jeremy McKinley started with the Kendallville Fire Department when he was just 16 years old.

Now, the longtime volunteer and emergency medic is being tapped as the next fire chief for the department.

On Tuesday morning, Mayor Suzanne Handshoe announced that McKinley will become the new chief of the department starting in 2020, replacing Chief Mike Riehm, who is retiring after 43 years of service to the city.

“These are big shoes to fill. Chief Riehm has really set the bar high for the Kendallville Fire Department,” McKinley said during his introduction. “I’m hoping that with the coordination of the mayor’s office, city departments, community organizations, we can come together to make Kendallville a safe, thriving community to live in.”

Handshoe said after recieving news that Riehm planned on retiring, she interviewed five prospective candidates for the chief’s position. After taking the Thanksgiving holiday weekend to think it over, the mayor said she got the feeling that McKinley was the right man for the job.

“You get that good gut feeling when you interview people. He’s extremely excited about this opportunity, knows Kendallville, extensive background as an EMT, he’ll bring additional training to the department. When I came to my decision over the weekend, I knew it was a good one,” Handshoe said.

McKinley and his twin brother both joined the Kendallville Fire Department at 16 and together started a fire explorers club. When he turned 18, he was put on as a volunteer, a position he’s filled ever since.

His day job for the last 19 years has been in a field running parallel to the fire service, working for the Parkview Emergency Medical Service, which often goes on runs hand-in-hand with firefighters. In the overlapping space between the two jobs, he’s been a provider of medical training to the firefighters in his role for the city.

McKinley steps into the lead role with the department in a good place.

The full-time roster is back at full strength for the first time in two years as a series of retirements and job changes had left a chain of openings, Riehm said. The city also recently earned an improved fire protection rating of a 4 from the Insurance Services Office on the 1-10 scale, with 1 being the best score.

With those pieces in place, McKinley says he wants to keep up the community outreach and involvement that’s been happening under Riehm’s watch, but one area he wants to focus on is near and dear to his own experience — volunteer recruitment.

Nationwide, fire departments are struggling to recruit new volunteers and many departments have an aging volunteer staff that is heading toward retirement.

McKinley’s hope is to get younger people interested in fire service, in the hope that more will follow a career path that’s looked somewhat like his.

“We already know there is a volunteer shortage nationwide. That’s where I kind of want to start at is to use our local resources … reaching out to the school corporations, the vocational schools, even the Impact Institute, having our recruitment starts at those schools. We can mentor them, teach them city values and they can come out certified as a fireman,” McKinley said.

As for Riehm, the exiting fire chief said the time was right to step back and head into retirement.

“I’m 63 and of course once you get up those years you naturally start to think about retiring,” Riehm said. “We work all our lives for the goal of being able to retire and enjoy life and I wanted to be able to enjoy some things that this schedule just doesn’t allow.”

Riehm started with the Kendallville Fire Department in September 1976. In January 1982 he stepped up into the role of a weekend driver before going full-time with the department in July 1989. In 2004, Handshoe picked him to take on the chief’s helmet, a job he’s taken on for the last 16 years.

“It’s been stellar and I had a great choice 16 years ago,” Handshoe said of Riehm’s long service. “I knew when I interviewed him I knew he was the right one for the job.”

The chief job has offered opportunities Riehm said he never could have imagined before taking the lead. In the past 16 years he’s been involved with the district planning council, the Indiana Fire Chief’s Association — including serving as that group’s president two years ago — and the Indiana Emergency Operations Center.

“I’ve been blessed in my career, probably capped off with this last ISO rating of getting the 4, but there are so many highlights too numerous to really put them all down. But it’s been a fulfilling career and it’s time to start another chapter in my life,” Riehm said.

As for the change in leadership and the department he leaves behind, Riehm knows he’s leaving the city in good hands as he steps back.

“We’ve got an ambitious group of young men that are really good firefighters, that are going to pick up that ball and do some great things,” Riehm said. “So I’m very confident that we have great people that will serve for a long time and do this community proud.”