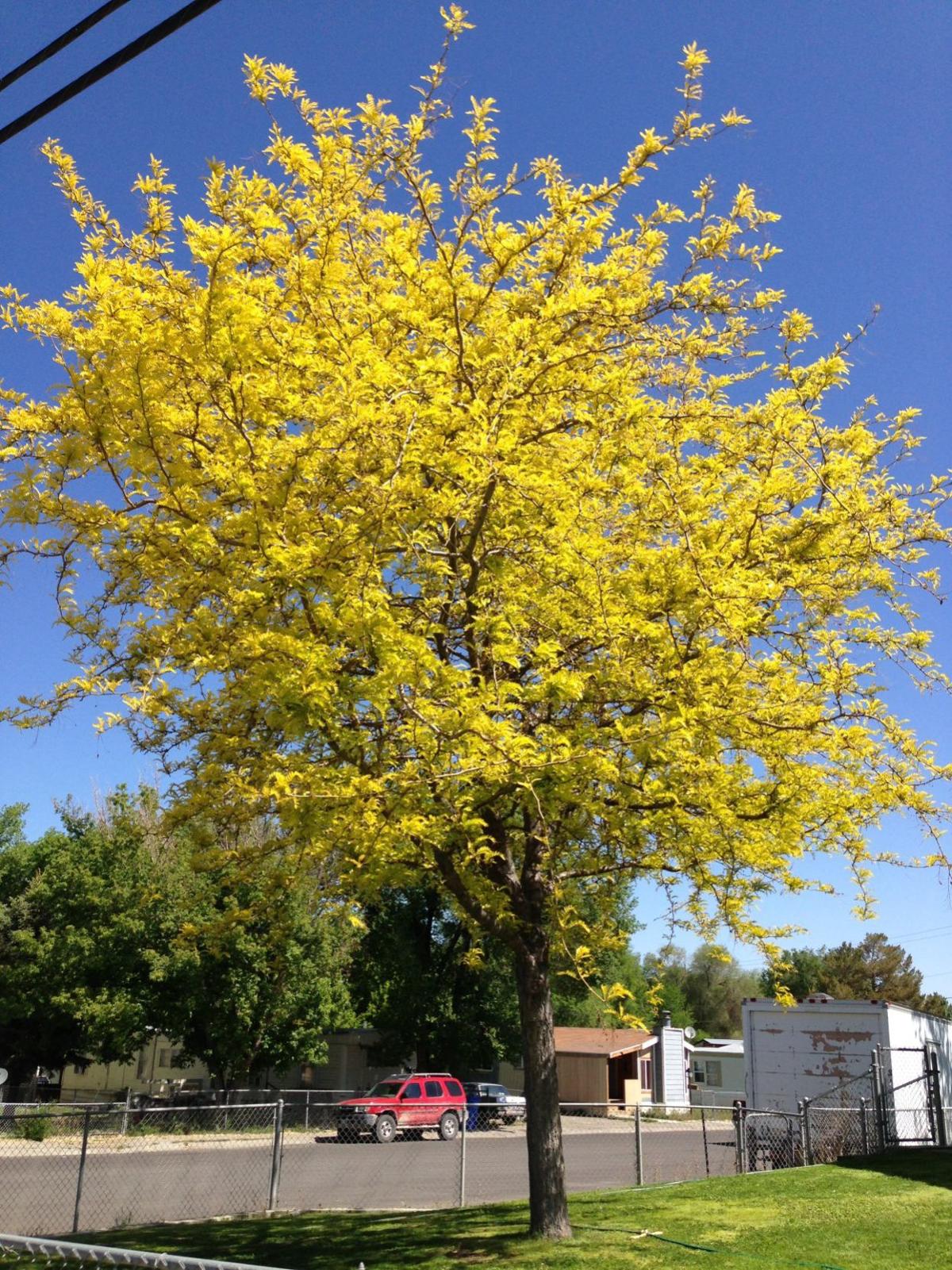 Left, a Honeylocust tree taken in Nevada in 2013 shows the bright yellow foliage the species displays in the fall. Right, a young “Frontier” elm tree photographed in an arboretum in England in 2016. During fall, the leaves change to a purplish-red color. Both types of trees will be planted in downtown Kendallville. 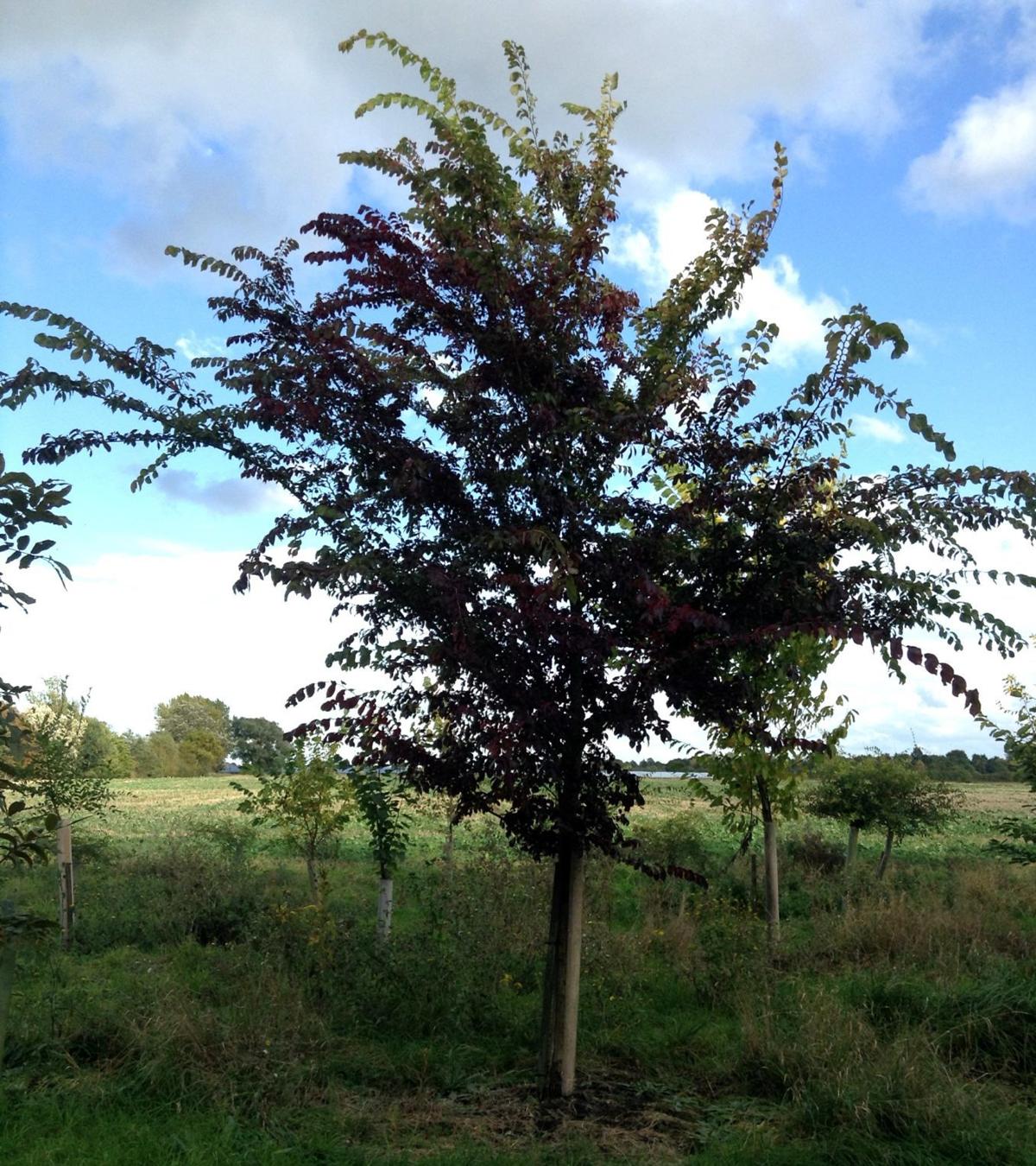 Pictured is a young "Frontier" elm tree photographed in an arboretum in England in 2016. During fall, the leaves change to a purplish-red color.

Left, a Honeylocust tree taken in Nevada in 2013 shows the bright yellow foliage the species displays in the fall. Right, a young “Frontier” elm tree photographed in an arboretum in England in 2016. During fall, the leaves change to a purplish-red color. Both types of trees will be planted in downtown Kendallville.

Pictured is a young "Frontier" elm tree photographed in an arboretum in England in 2016. During fall, the leaves change to a purplish-red color.

KENDALLVILLE — Downtown is looking a little less green temporarily as Kendallville swaps out trees along Main Street as part of the streetscape project.

The short, spherically-trimmed Bradford pear trees have already been removed, leaving empty tree wells along downtown sidewalks. But downtown won’t stay treeless for long, as crews will be planting new varieties along the corridor as part of the streetscape project.

Although the old trees weren’t particularly old — they reportedly were planted the last time Kendallville did major upgrades downtown — there were a few factors stacked against them that made it a good time to switch to something different, Nathan Deig of streetscape design firm Jones, Petrie, Rafinski said.

First, Bradford pears, also known as Callery pear trees, are technically an invasive tree species. Although they produce pretty white flowers in the spring and are hardy in weathering winters and plant disease, they aren’t super durable as they grow larger and have a tendency to be susceptible to storm damage.

Because of the size, root structure and their designation as an invasive tree species, the city is not transplanting the trees and has instead disposed of the Bradford pears.

Second, while the small trees look nice along the sidewalk, they’re obstructive in two ways. Not only does the short height make it difficult to see the storefronts behind them, their short leafy crowns stick out at about head and shoulder height on an average adult, which creates a pedestrian obstruction and squeezes the width of the sidewalk. Also, if not properly pruned, the branches can stick out and affect streetside parking.

And third, with the type of construction taking place — a full removal and replacement of sidewalks and curbs — the underground root structure was likely to be damaged anyway.

“It is then in the best interest of the streetscape and to maintain downtown aesthetics to plant new trees,” Deig said.

“The Frontier Elm is a elm variety that has good resistance to the Dutch elm disease which killed many of the elms historically planted in streetscapes. This elm variety grows in a vase shape and can reach mature heights of up to 40 feet featuring a beautiful reddish-purple to burgundy fall color,” Deig said.

“The Skyline Honeylocust is commonly utilized as a street tree in downtown environments because it is a seedless variety and has a relatively minor amount of leaf litter in comparison to most street trees. The Skyline Honelocust can reach mature heights of up to 45 feet featuring a golden fall color,” Deig said.

Picking a good tree for downtown is different than picking the right tree for, say, your yard or a park. Surviving planted under concrete, with buildings close by and pedestrians underfoot requires a bit more thought process than simply finding something that looks pretty when in bloom or during fall.

“These (considerations) include whether the species produce fruit, the type and density of leaf structure, the shape of the tree and branching habits, drought and salt tolerances, and what type of root systems the tree species have,” Deig said. “Both tree varieties have a low amount of leaf litter and the Skyline Honeylocust is a seedless variety. Both of the selected overstory trees have growing habits that allow for pedestrian traffic to travel beneath the lower branches of the trees and that limit the interference with vehicular traffic and adjacent buildings. Additionally, selecting a tree that does not have a shallow root structure that will heave sidewalks in the future is important and was considered.”

Kendallville’s $1.31 million streetscape is ongoing, with crews currently working on the west side of Main Street. Work is expected to continue throughout the summer and into fall.