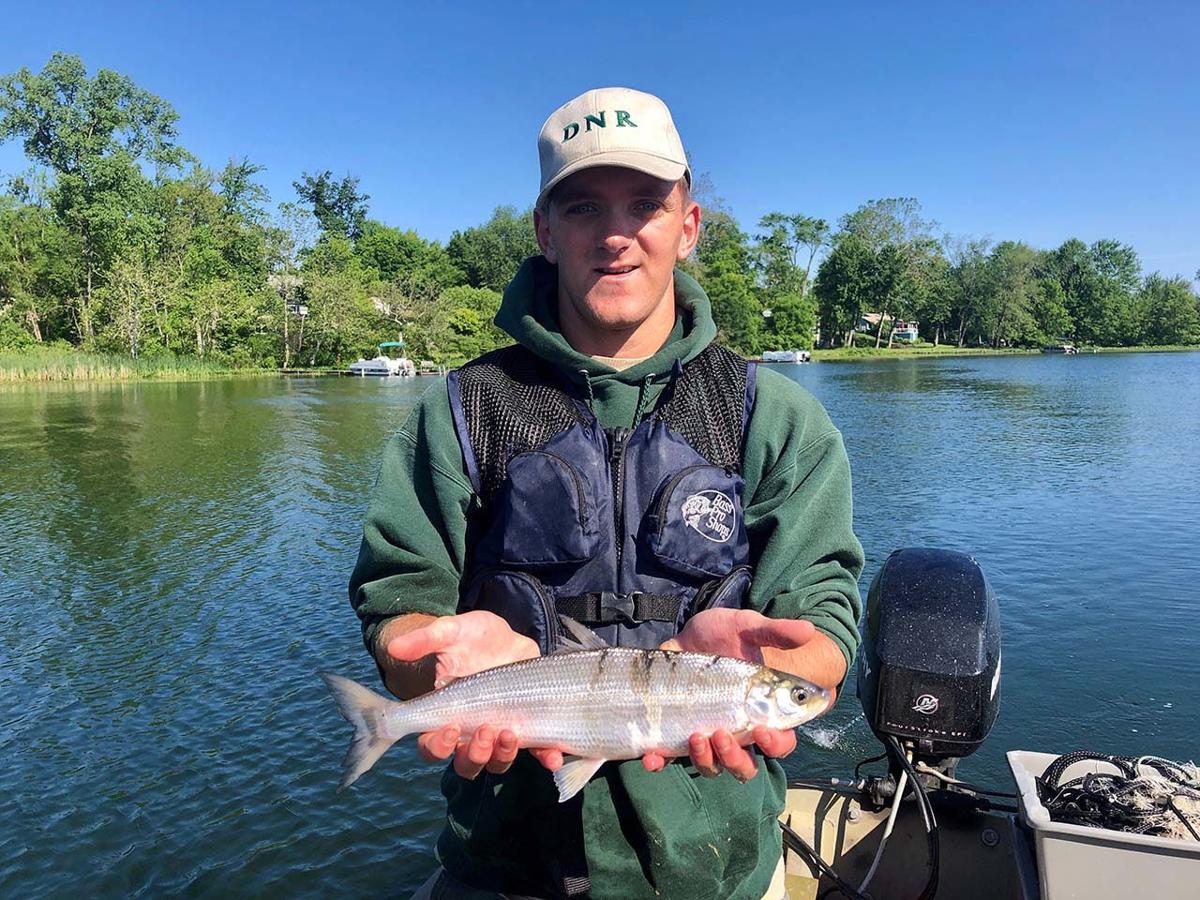 Indiana Department of Natural Resources Division of Fish and Wildlife fisheries aide Aaron Voirol holds a cisco captured at Crooked Lake in Noble County during a 2019 fish community survey. The endangered species only remains in seven lakes in the state, all of them in northeastern Indiana.

As of today, it is illegal to take state-endangered cisco from Indiana lakes.

Cisco only remain in seven lakes in northeastern Indiana. In 1955, the species could be found in 42 northern Indiana lakes, including the Lake James chain in Steuben County.

It is the only native fish from the salmon family in Indiana waters other than Lake Michigan. It is a cold-water species that requires exceptional water quality to thrive. The glacial lakes of northern Indiana represent the southernmost extent of the species’ range in North America.

“The best way to preserve the water quality of Indiana’s cisco lakes is to implement best-management practices that reduce the quantity of nutrients and sediment entering the water,” said Matthew Linn, IDNR fisheries research biologist. “The preservation of water quality at these lakes is vital because once degraded, water quality is costly and difficult to restore.”

Attempts to reintroduce cisco at Gilbert Lake in Noble County in 1979 and Green Lake in Steuben County in the early 1990s failed, says a report by the DNR’s Division of Fish and Wildlife.

Future cisco management will focus on collaborative efforts with regional partners to preserve cold-water habitat through the application of best-management practices that reduce the quantity of nutrients entering the remaining lakes with cisco, said the news release.

Nutrients include phosphorus and nitrogen, which are found naturally in the environment and support the growth of aquatic plants. They become a problem when human-created excesses of nitrogen and phosphorus wash into the water. Excess nitrogen and phosphorus come from animal manure, chemical fertilizers, municipal pollution, sewage, industrial waste, soaps and detergents, says the U.S. Environmental Protection Agency.

Too much nitrogen and phosphorus in the water causes algae to grow faster than ecosystems can handle. Significant increases in algae harm water quality and the food resources and habitats fish and other aquatic life need to survive. The algae also decrease oxygen, another vital element for survival.

Soil erosion can be caused by removal of native plants and trees that formerly held it in place or changes to landscape from development activities. Shoreline alterations could include attempts to create recreational opportunities, such as swimming areas or sea walls, where a more natural habitat once existed.

Changes in temperature that cause warm water to linger until ice covers a lake can cause the water to “turn,” says the USGS, affecting the temperature in the lower parts of the lake where water typically would remain very cold at all times. This, in turn, could have a negative affect on living beings adapted to that ecosystem.

In a September 2018 report based on the Indiana Climate Change Impacts Assessment, Purdue University researchers evaluated the impact of global warming on native aquatic species.

“As air temperatures warm 5 to 6 degrees by mid-century, water temperatures in Indiana’s streams, rivers and lakes will increase, the duration and extent of ice cover will decline, and lake stratification during the warm season will last longer,” says a synopsis of the report. “Shifting thermal characteristics in Indiana’s water bodies will have rippling effects on aquatic organisms, including their growth, survival and reproduction patterns. Warming water temperatures will generally maintain or increase habitat range for Indiana’s warm water fishes, while significantly reducing habitat for Indiana’s cool water and cold water fishes.”

Preserving the cold-water cisco amid environmental changes and human encroachment will be a challenge. The NRC took a first step by protecting them as an endangered species. Best-management practices that follow could potentially require lake property owners to assess their activities in light of the natural resources they chose to live along.