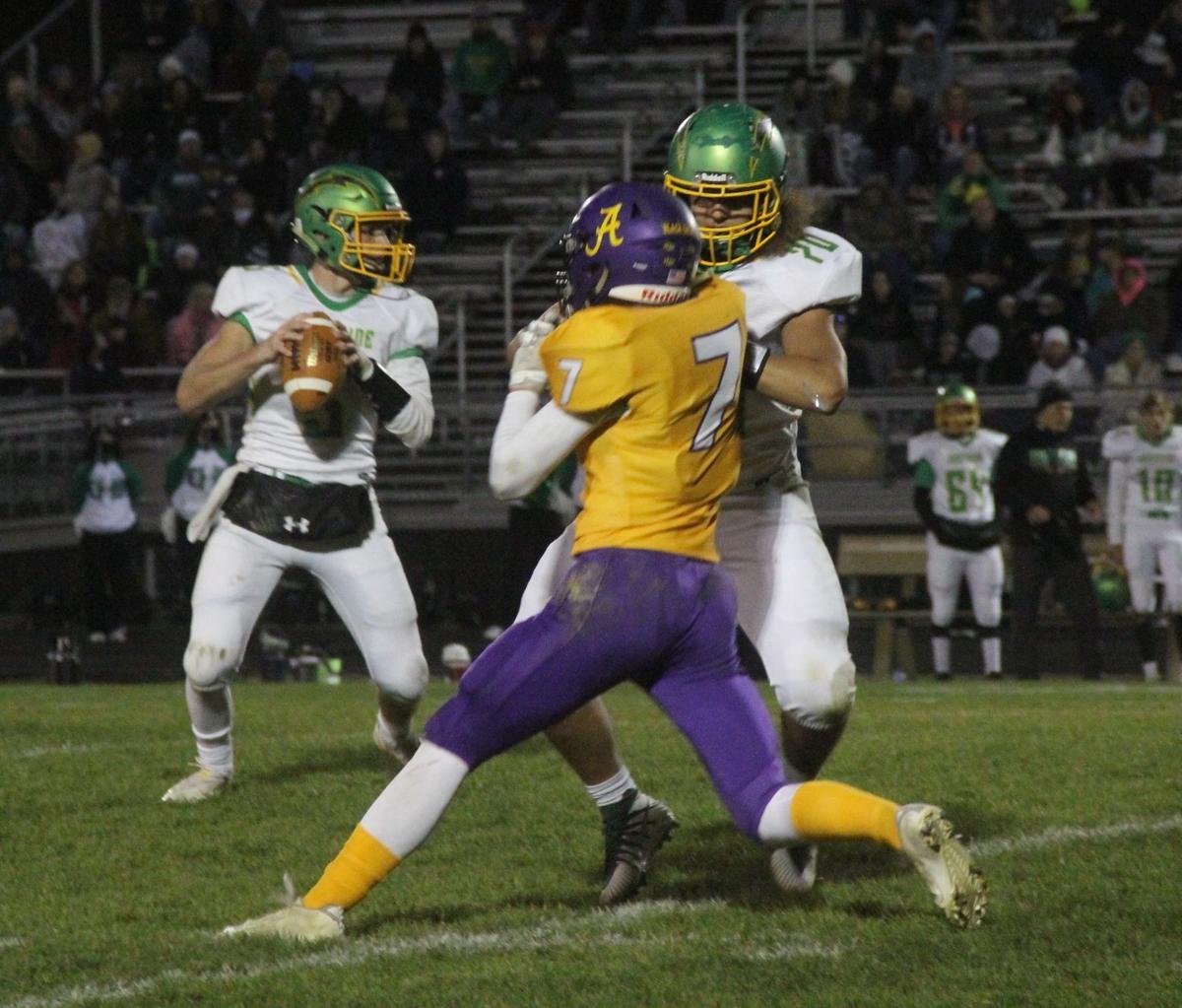 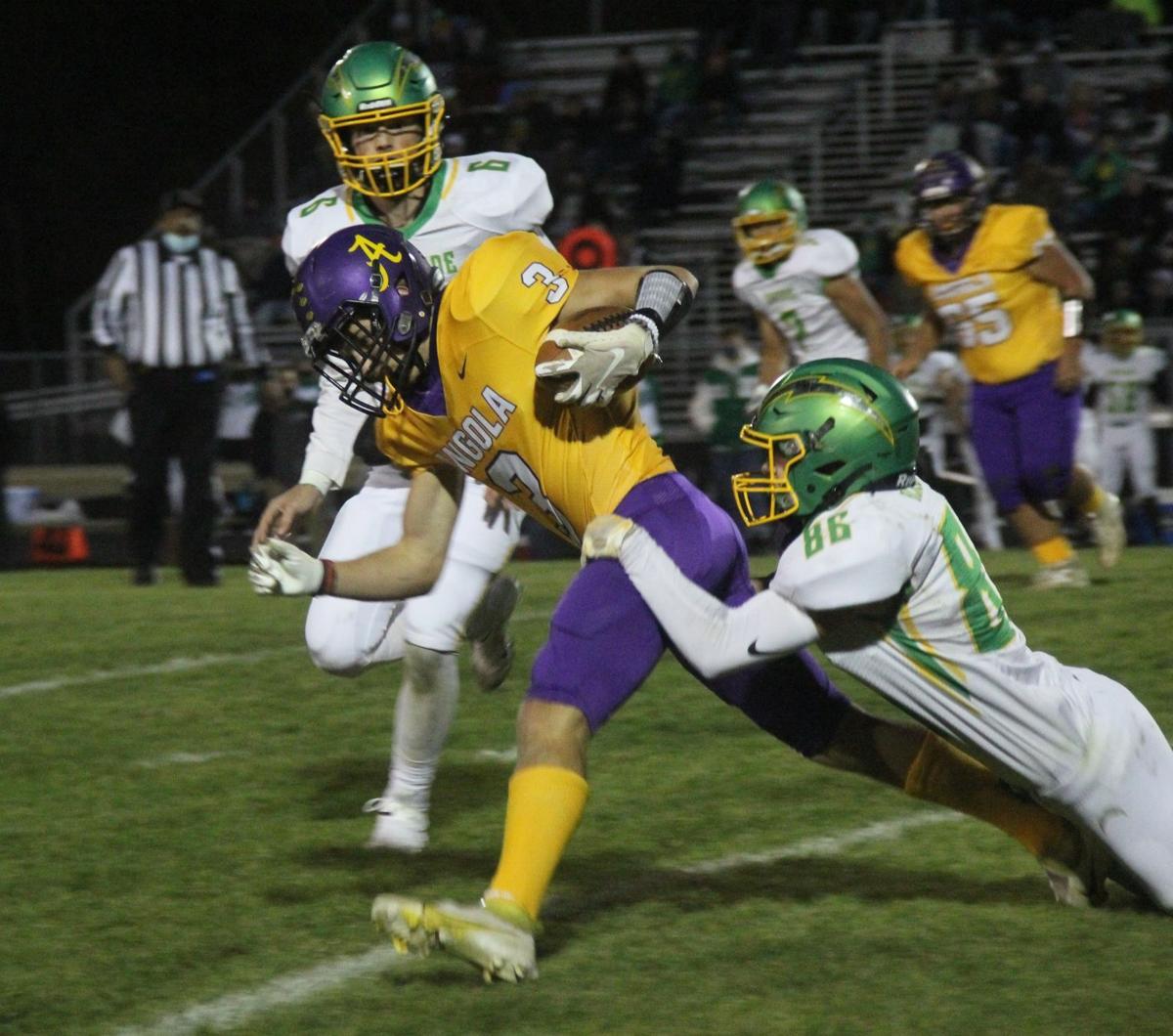 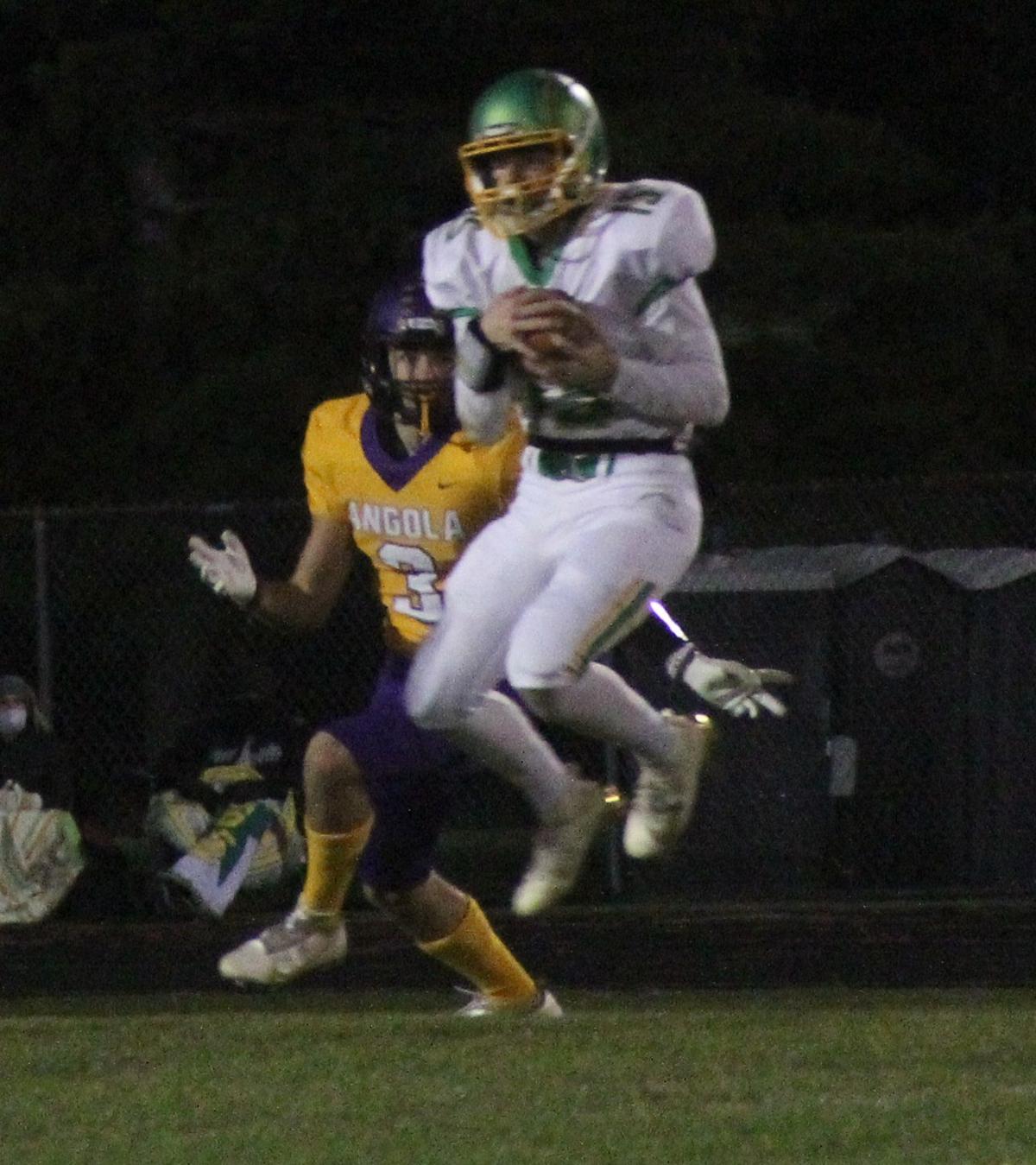 Eastside safety Lane Burns leaps to intercept an Angola pass during first-half action Friday. The Blazers closed the regular season with a 42-7 win.

Eastside safety Lane Burns leaps to intercept an Angola pass during first-half action Friday. The Blazers closed the regular season with a 42-7 win.

ANGOLA — The Eastside Blazers scored on all but two possessions and closed out the 2020 regular season in a big way, beating host Angola 42-7 Friday.

The Blazers head into the postseason with an 8-1 record. The Hornets are 4-2 in all games.

The visitors rolled up 428 yards of total offense and held the Hornets to just 53 yards.

Lane Burns has been at the center of big plays all season. Friday, he made contributions in all phases of the game once again.

He made an emphatic statement on the first snap of the game.

Blitzing from his safety position, Burns drilled Hornet quarterback Tucker Hasselman almost before he could hand the ball off to brother Finley Hasselman.

Later, Burns had a big punt return, an interception on defense and caught a touchdown pass.

“I told Lane at halftime the first play of the game set the tone for the entire game,” said Eastside head coach Todd Mason. “I thought we fed off of that. I thought we played a physical, fast football game, and executed well on both sides of the ball.

The Blazers punted on their first possession, but got the ball back at their own 35 with just under five minutes left in the first.

Davis completed one pass for 10 yards to Wade Miller, but Eastside kept the ball on the ground for the remaining seven plays, with Davis scoring from 12 yards out. The extra point made it 7-0 with 1 minute, 44 seconds left in the first.

The Hornets went three-and-out on their next possession, and the Blazers needed just four plays to strike again. Davis broke loose for a 59-yard touchdown run on the second play of the second quarter.

Angola put a temporary halt to Eastside’s momentum when a heavy pass rush led to Tucker Hasselman picking off his quarterback counterpart, returning the interception 50 yards for a touchdown with 8:58 left in the second quarter.

Unfazed, the Blazers went right back to work, marching downfield in 11 plays, capped by Davis’ one-yard run. Eastside missed the extra-point kick, but led 20-7 with 3:23 left in the half.

Burns made another big play, picking off a Hasselman pass on Angola’s next possession, returning it to the Hornet 40. Six plays later, Davis connected with Gavin Wallace for a 10-yard touchdown pass. Davis then completed the two-point conversion pass to Tanner Wicker for a 28-7 lead before the half ended.

The Blazers took the second half kickoff and needed just eight plays to find the end zone once more, this time on Firestine’s three-yard run.

Angola put together two first downs, including a nice run by Andre Tagliaferri. In the drive, however, Hornet player Lincoln Schreiber was injured. Play was delayed for more than 10 minutes as he was taken off the field on a stretcher.

The Hornets wound up punting on that possession.

Eastside’s final score came on Davis’ 66-yard pass to Burns with 2:50 left in the third. Jaiden Baker’s extra-point kick made it 42-7.

The rest of the contest was played with a running clock.

The Hornets were minus-3 yards in passing. Hasselman ran 16 times for 23 yards. Tagliaferri ran seven times for 21 yards.

Angola will try to regroup when it visits DeKalb in a Class 4A Sectional 19 game. Eastside travels to Bluffton to open play in Class 2A Sectional 35.