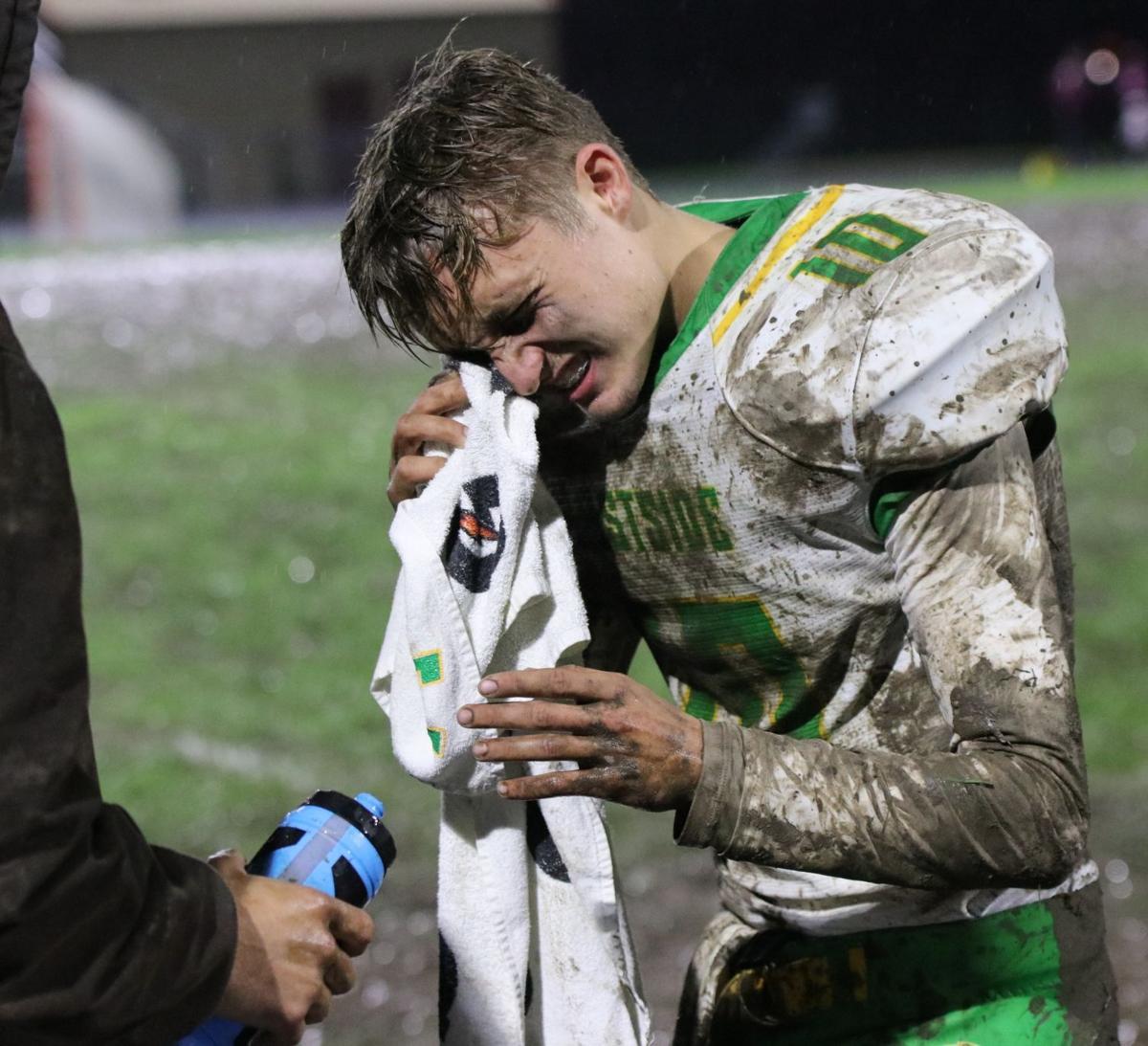 Eastside player Johnny Eck tries to clear mud out of his eyes eyes as he takes a break during Eastside’s victory over Central Noble Oct. 29 in sloppy conditions in Albion. 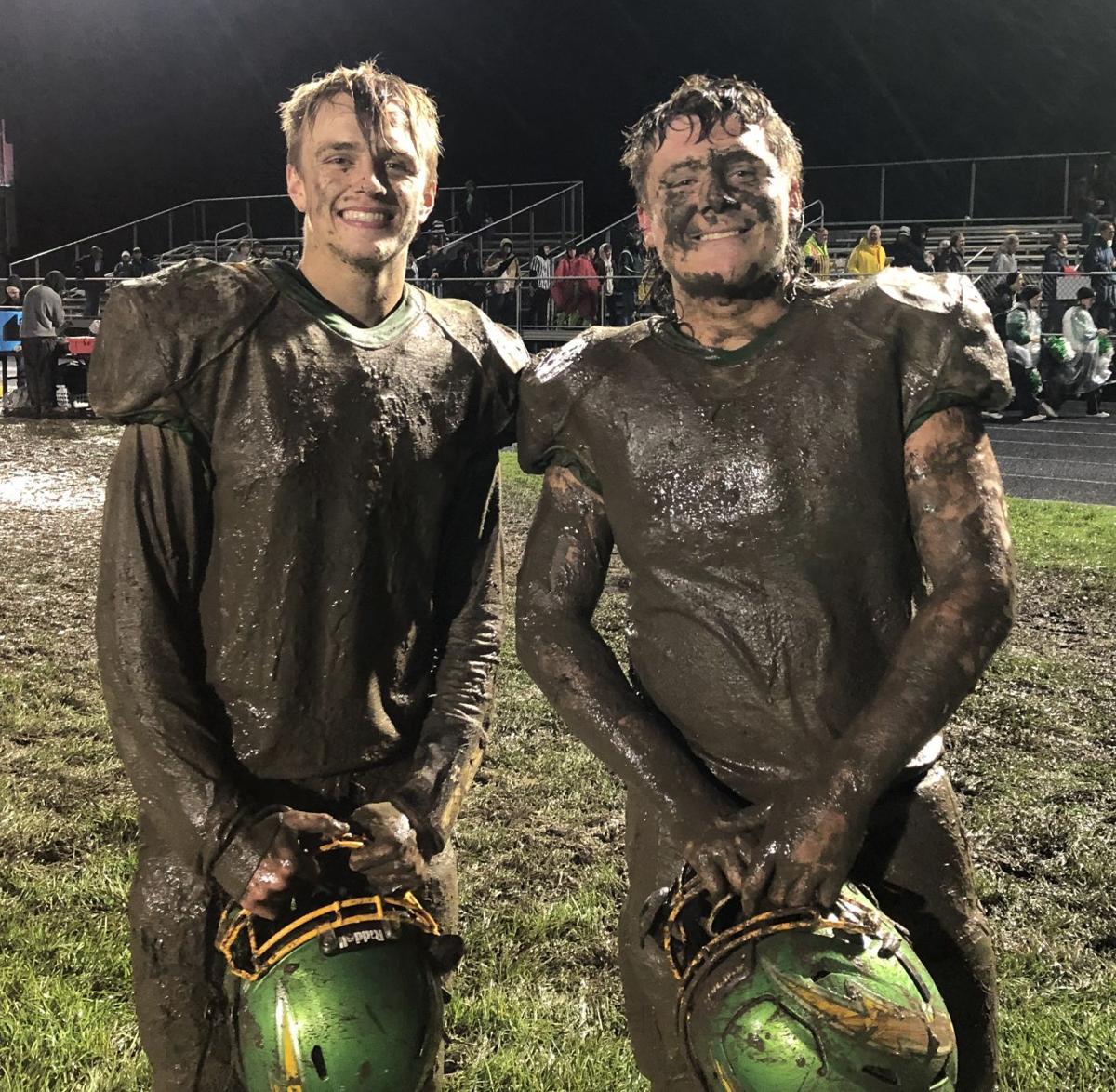 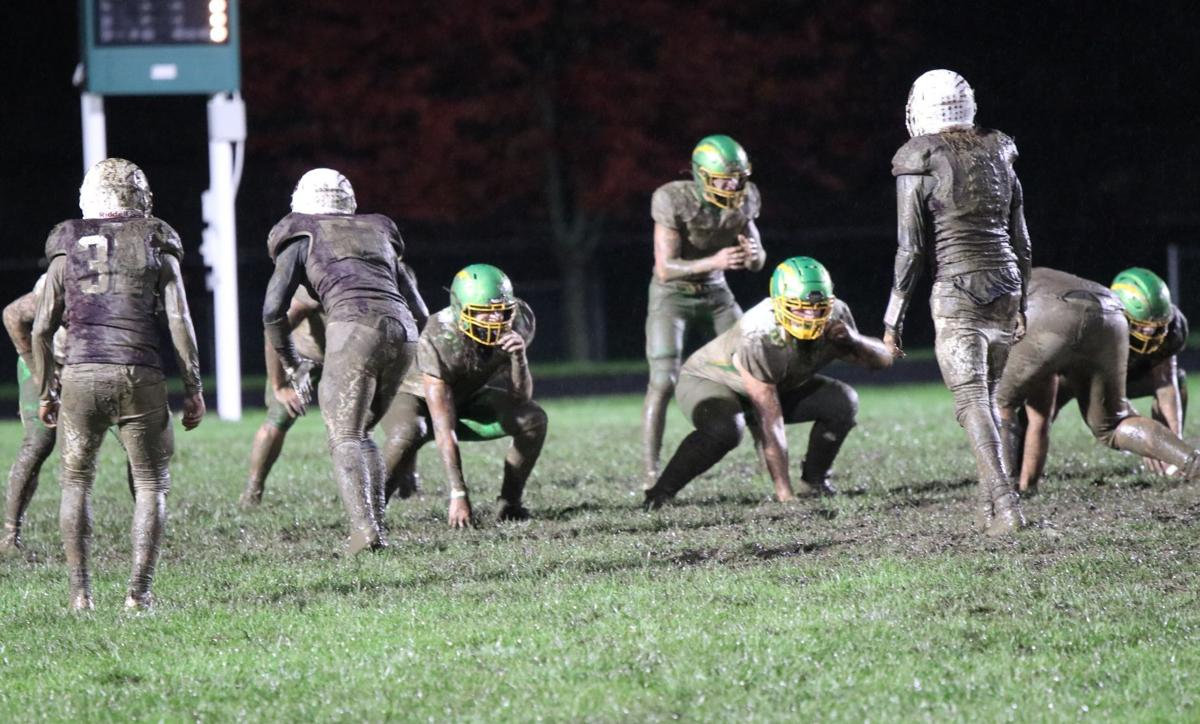 Can’t tell the players without a program? An Oct. 29 mud bowl between Eastside and Central Noble proved you can’t tell the teams apart without different helmet colors.

Eastside player Johnny Eck tries to clear mud out of his eyes eyes as he takes a break during Eastside’s victory over Central Noble Oct. 29 in sloppy conditions in Albion.

Can’t tell the players without a program? An Oct. 29 mud bowl between Eastside and Central Noble proved you can’t tell the teams apart without different helmet colors.

KENDALLVILLE — This past football season, local high schools dealt with large amounts of rain that resulted in flooding their football fields. High schools like Central Noble, DeKalb and Angola ran into flooding issues and hosted games where their fields were covered in mud.

In sloppy, mud-caked conditions, football games turned into battles of brown versus brown. If not for different colored helmets, it’d be hard to tell one side from the other.

But those muddy days may be changing, as DeKalb and Angola are planning to join East Noble with turf instead of grass.

DeKalb faced Leo in muddy conditions on Oct. 15 after heavy rain for days caused its field to be filled with mud. Leo defeated DeKalb 14-0 in that game which became known as the “Mud Bowl”.

Central Noble took on Eastside on Oct. 29 under heavy rain which caused Central Noble’s football field to be covered in mud. Eastside ended up winning the game 38-6.

Muddy field conditions don’t occur all the time, but natural grass fields are more likely to be flooded and make the field conditions harder to play on as cleated athletes tear up the grass and dirt underneath.

“We had lots of rain in a short amount time. We’ve been dealing with a muddy field since our week eight game against Garrett,” said David Bremer, athletic director at Central Noble Community Schools.

With all the rain coming down, the field didn’t get a chance to rest and dry up. He said the school had to roll off rainwater on the field four times, but even after Central Noble’s football team was knocked out of the postseason, the field still remained pretty wet.

“Weather does impact part of the game and can make it more difficult to run certain plays,” he said. “Despite that, the players adapted by running the ball more and lineman worked on their footing.”

Natural grass fields lack the types of drainage systems you often see with turf fields and they can become difficult to play on.

The school has thought more about going to turf in recent years. The challenge for a small, rural school like Central Noble is getting the funds in order to do so.

“It’s a dream for many schools to have. They’re pretty expensive to maintain so the costs would be challenge and having to replace every couple of years can add up,” he said.

Central Noble plans to continue exploring the idea of going with turf in the future.

The installation of turf fields at the high school level are becoming more common today. Professional and college football teams have been using turf for many years now and high schools in northeast Indiana are starting to get their own turf fields.

One high school that’s had turf for a couple years now is East Noble. It just finished its 12th season with a turf field. East Noble Athletic Director Nick David said having a turf field has been a godsend.

“It’s amazing how many people use it,” he said. “Football, soccer, our band program and youth games are all played on it.”

Physical education classes also utilize the field. He said turf fields are really nice to have since you can host multiple sporting events like sectionals.

East Noble has been able to host sectionals for its soccer teams in recent years and David said that wouldn’t be able to happen if they didn’t have a turf field.

“There’s no paint or fertilization you have to put down. The initial costs are done at the beginning like putting in the drainage system and laying down the turf. After that, you only pay for the maintenance,” he said. “I believe the benefits outweigh the costs.”

Outside of East Noble High School, the newish East Noble Middle School also features a turf field, making it the only middle school in the local area to have an artificial surface.

Rich Rodriguez will be named head coach at Jacksonville State, per reports

Turf fields on average can last between 10-20 years. He said they can last longer if they’re properly maintained. The goal is to get another three to four years out of their current field and East Noble is already preparing for the big capital expense of having to replace its turf this decade.

David credits much of that to the coaching and maintenance staff for keeping the field in good shape.

Two high schools in the region are joining East Noble in having a turf field. One of them is DeKalb Central School District.

DeKalb Superintendent Steve Teders said the district is working on a facilities upgrade for the high school that includes the installation of a turf field and a new track around it. The field is planned to be installed in the summer of 2022 and ready in time for football season to begin.

The school district attempted in the past to get a turf field as part of a larger school renovation project, but the spending plan was rejected by residents. At the time, the school proposed a $37 million facilities upgrade and failed to pass through a vote.

“We had to respect the process. Some people may have agreed with it and some thought it was too much,” he said.

After failing to pass, Teders and other district officials came together and assessed the district’s needs.

The high school has been using a grass field and often shares their facilities with the middle school.

“We have a large group of programs that use our field. Just the amount that it’s used weighed very heavily in trying again for a turf field,” he said.

There is a lot of excitement amongst the DeKalb community for the upgrade. He said the technology for turf is better today and is a safer alternative to grass.

The turf field will be accessible to everyone in the community.

Over at Angola High School, the Metropolitan School District of Steuben County voted just last week to approve the school getting a new turf field and track installed in summer 2022 in time for fall sports.

MSD Superintendent Matthew Widenhoefer said this year, the school’s football field got hit with lots of rain and, at one point, players were sinking into 4 inches of mud.

“We looked at other schools and saw what they were doing and we felt we had to do the same,” he said.

The process for getting a turf field began about five weeks ago when Athletic Director Steve Lantz presented the idea to MSD’s Board of Trustees.

They highlighted the issues with their current field’s drainage system and overall usage.

Having a turf field will allow the high school to use it year-round, except in January and February.

“We laid out what is important for the community and what we needed to do for these upgrades,” Lantz said.

The district did research on turf fields and the different types that are offered. Getting the public to come around to the idea of a big expenditure can be tough, but this year’s soft, muddy field helped soften public opinion.

“Parents and students were disappointed this year when the rain flooded the field and made it unplayable. I think people will be very excited about what’s to come,” Widenhoefer said.

The field will be installed this coming summer and will be ready for the football team’s home opener on Aug. 24.