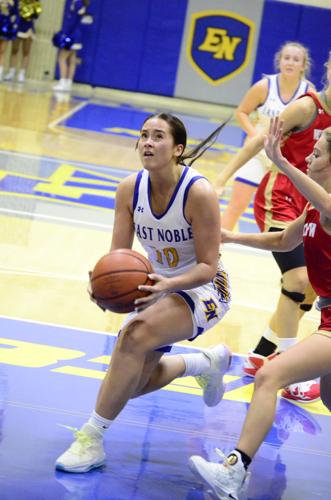 East Noble senior Kya Mosley drives to the hoop in the Knights’ season opener at home against Westview on Nov. 5. Mosley is one of two seniors on the roster and will be a big factor for the Knights this season. 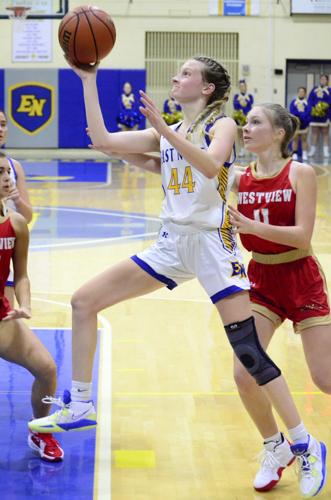 East Noble freshman Addison Deming attempts a layup in her team’s season opener against Westview on Nov. 5. Deming is a key newcomer for the Knights and is expected to contribute immediately as a starter.

East Noble senior Kya Mosley drives to the hoop in the Knights’ season opener at home against Westview on Nov. 5. Mosley is one of two seniors on the roster and will be a big factor for the Knights this season.

East Noble freshman Addison Deming attempts a layup in her team’s season opener against Westview on Nov. 5. Deming is a key newcomer for the Knights and is expected to contribute immediately as a starter.

KENDALLVILLE — The East Noble girls basketball team has been putting in the work this offseason.

This past summer, the players have made over 177,000 shots, according to third-year EN head coach Shawn Kimmel.

“All five returning varsity players saw 20-plus minutes per game and racked up a lot of starts for us,” said Kimmel, who is in his seventh season overall as a head basketball coach. “However, these ladies have drastically improved their ability to get to the rim and this team is going to compete for 32 minutes, shoot the 3, attack the basket and defend with a new passion.”

The shots made in the offseason and in practice is expected to translate to games, says Kimmel, as the Knights averaged just 30.8 points per game on offense (lowest mark since 2010-11) last season, only getting to 40 in their four victories (4-17 a year ago).

The best thing the Knights have going for them this year, however?

The Knights only lose one senior to graduation, Kyndal Mynhier, though she was the team’s leading scorer at seven points per game.

“Starting with Bailea, over the past three summers, she has made 35,000 shots,” Kimmel said. “She doesn’t even think about it anymore. She’s a girl that hit six in a game last year and all the time in practice, and every time she passes up, I always tell her that there’s only one way to hit seven.

“Kya hit 10,000 shots for the first time this summer and it’s made a difference in her free throws and scoring underneath the bucket,” Kimmel continued.

After East Noble’s season opening game with Westview on Nov. 4, Kimmel said that while the stat sheet didn’t show it, Walmsley is a player who’ll control games and be vocal on the court in managing plays.

“Bree, Kya, Bailea, Payton and Taylor are all seasoned veterans now and all five are determined to right the ship,” Kimmel said.

A key newcomer for the Knights is 5-8 freshman forward Addison Deming, who is the team’s fifth starter and had five points, four rebounds, three assists, a steal and a block in the opener against the Warriors.

“The sweet thing about Addison is that she’s going to be a stat stuffer for us,” Kimmel said. “She’s going to finish the game with five or six points, four or five rebounds, two or three assists, two or three steals and a couple deflections. She’s just a really great all-around basketball player for us.”

Other newcomers rounding out the varsity roster are junior Lexie LaLone and freshmen Kate David and Macey Colin. The three will compete for varsity minutes while David and LaLone will spilt time between junior varsity and varsity.

While the Knights don’t have a lot of size this year to compete in the post, Kimmel still has high expectations for his team.

“I tell the girls all the time in practice, we may be the best small 4A school team in the state,” Kimmel said. “If we had a 6-2 or 6-1 girl underneath the paint that we could throw it to, people would look at us a lot differently.”

Kimmel continued, “Our margin of victories is going to be very close. Our goal is to get into the fourth quarters of a lot of games, wear people down and win at the end with our defensive approach.”

The Knights added one game to their calendar this year, a Jan. 10, 2023, meeting with Wayne in Kendallville.

In the season opener against Westview, the Knights started the year with a 53-37 victory.