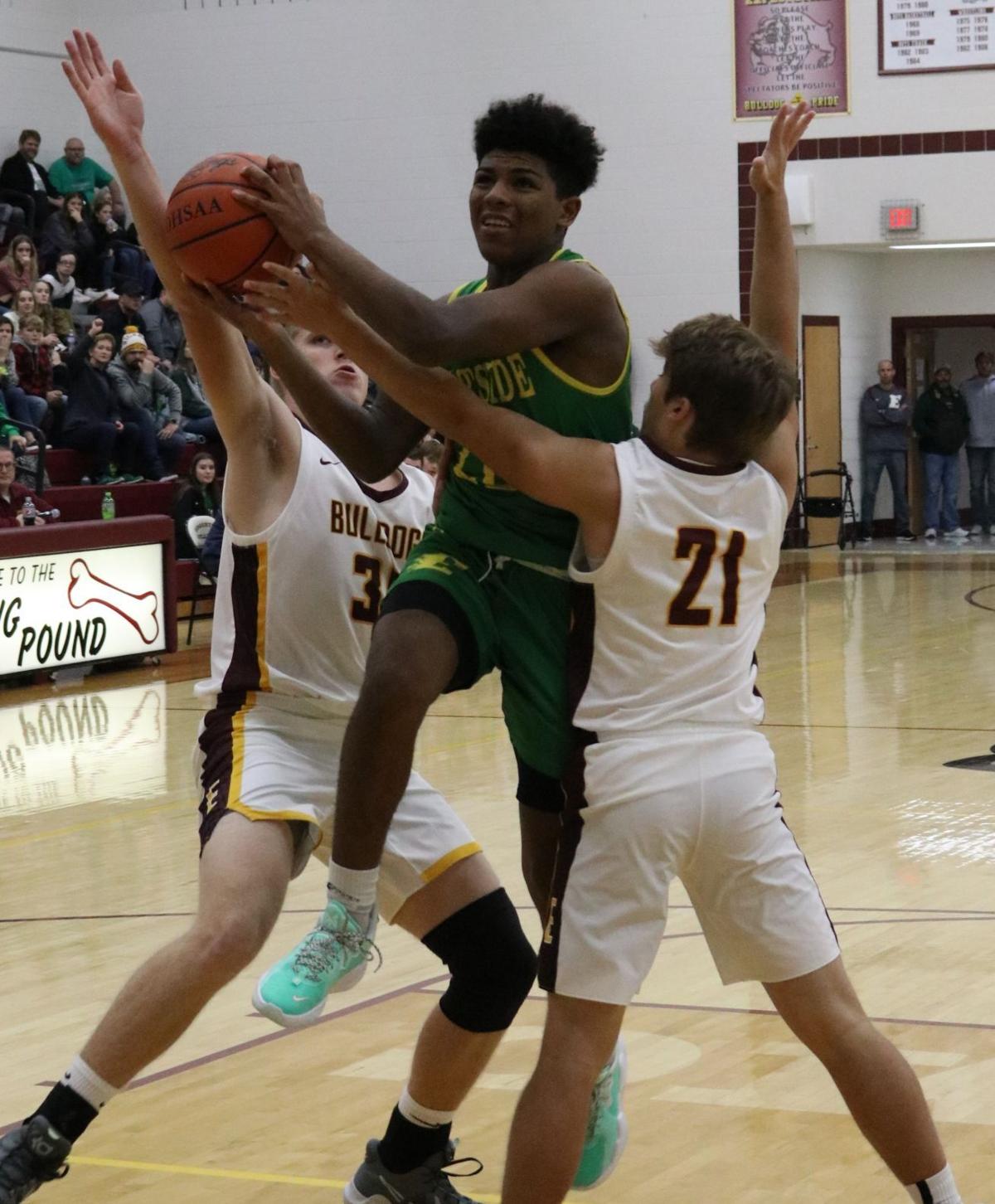 Eastside junior Santino Brewer slips between Edgerton defenders for two of his seven points in the Blazers’ 63-46 win. 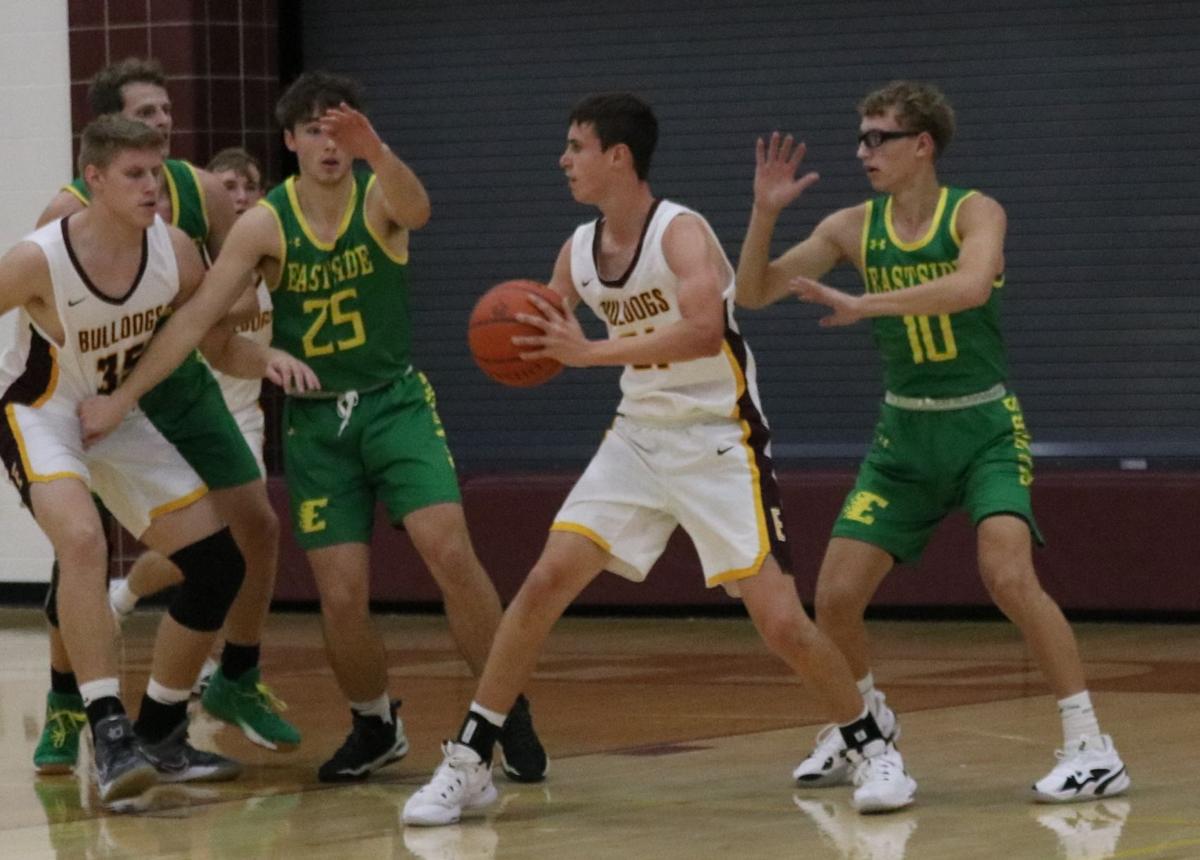 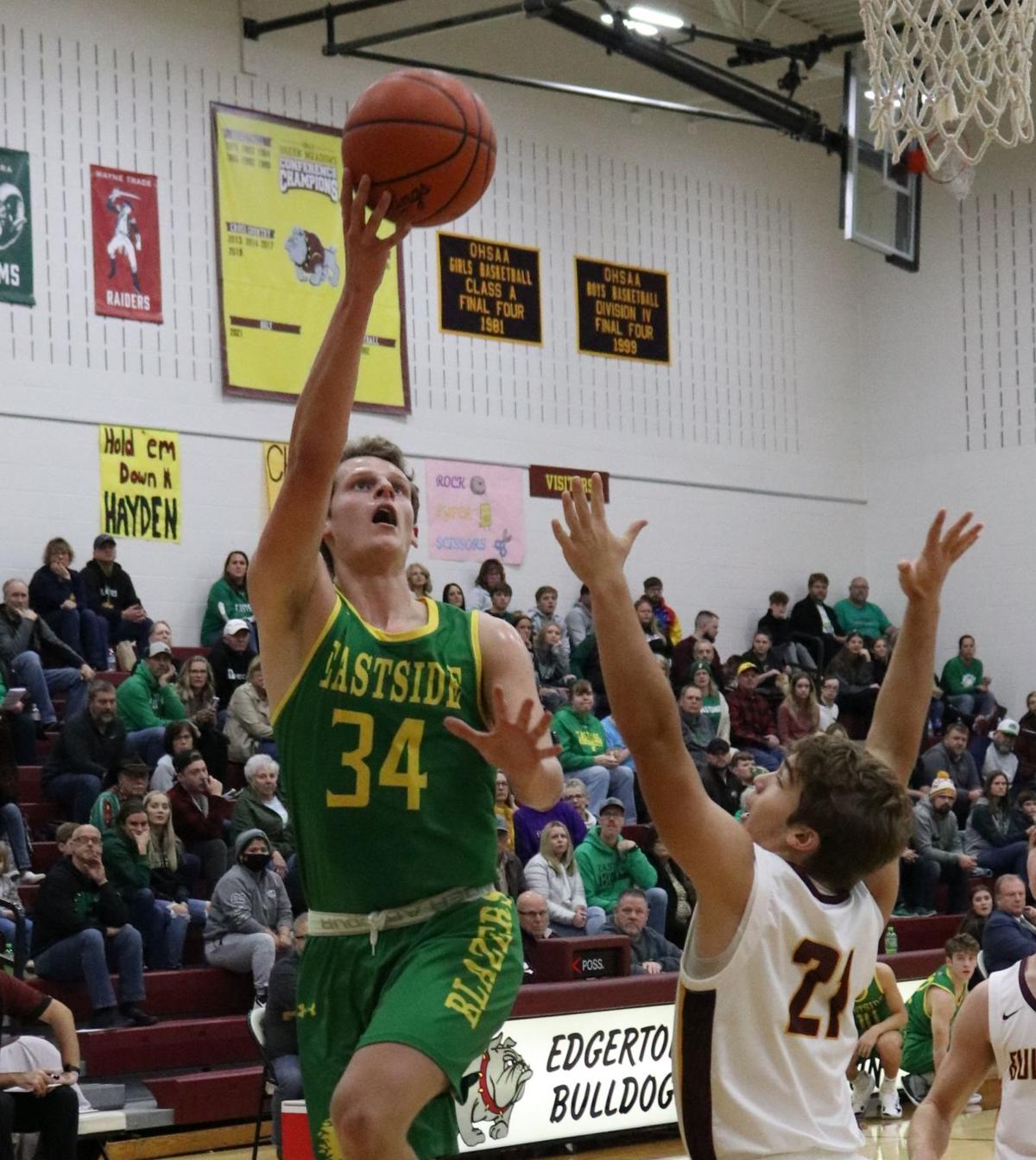 Eastside’s Logan Fry scores two of his seven points in his first basketball action since the 2019-2020 season. Fry missed all of last year with a knee injury.

Eastside junior Santino Brewer slips between Edgerton defenders for two of his seven points in the Blazers’ 63-46 win.

Eastside’s Logan Fry scores two of his seven points in his first basketball action since the 2019-2020 season. Fry missed all of last year with a knee injury.

EDGERTON, Ohio — An athletic Eastside boys basketball team used its size and quickness in a 63-46 victory at Edgerton, Ohio, Friday in the first game for both teams.

It was the first win at Eastside for new head coach Ed Bentley.

Like any first game, there were ups and downs.

“We’re like everybody else in the first game, trying to figure out things,” Bentley said

“For the most part, I thought we came out and defended and did what we’re supposed to do,” the Blazer coach said. “It’s about figuring it out.”

Senior Logan Fry and junior Santino Brewer added seven points each for Eastside. It was Fry’s first action after missing the entire 2020-2021 season with a knee injury.

Eastside (1-0) started quickly, with Trevino scoring on the opening tip from Snyder just 5 seconds into the game. The visitors built a 7-1 lead after a Trevino putback and led 17-11 after a quarter on Willard’s score.

The Blazers scored the first seven points of the second on a three by Willard and field goals by Brewer and Fry before Edgerton senior Cole Meyer scored inside with 5 minutes, 32 seconds left in the half.

Snyder scored twice in the paint and junior Clayton Minnick added a score after that as Eastside extended its lead to 30-16 midway through the quarter.

There would be no more scoring until Willard swiped the ball and scored with 1:51 left in the half.

Trailing by 16 at halftime, a 9-2 run in the middle part of the third got Edgerton back into contention.

Junior Nathan Swank started the rally with a three. After a scoop bucket by Willard at the other end, Bulldog freshman Cory Herman dialed long distance. Junior Corey Everetts scored after an Eastside turnover, and Meyer sank two free throws following a miss by the visitors to close the gap to 42-34.

The Blazers got a three from Fry and a score from Brewer to push the margin to 13, but Herman hit another bomb to make it a 10-point game. The visitors led 50-40 with a quarter to play.

Eastside started the fourth with a 9-0 run to regain control. Hugh Henderson scored after a Bulldog miss to begin the outburst and capped it with both ends of a bonus with 3:22 to play for a 59-40 lead.

Meyer led Edgerton (0-1) with 14 points. Everetts finished with 11 and Swank reached double figures with 10. Herman ended the night with nine points, all on threes. The Bulldogs hit seven threes in the contest.

Eastside is right back at it tonight with a visit to DeKalb.

E.J. Miller and Garrett Thompson had six points each to lead Eastside. Kyle Yoder had five points and Carter Rutan had four. Loden Johnson and Nolan Steury had one free throw each.