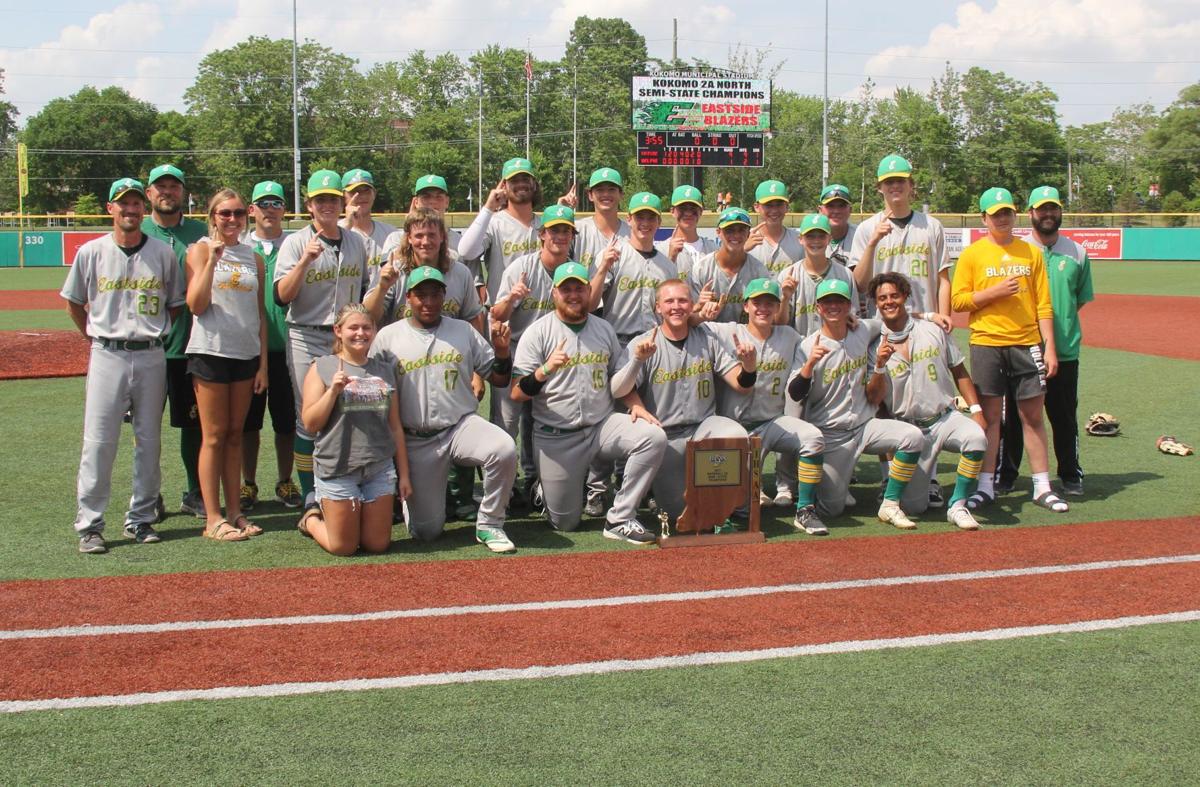 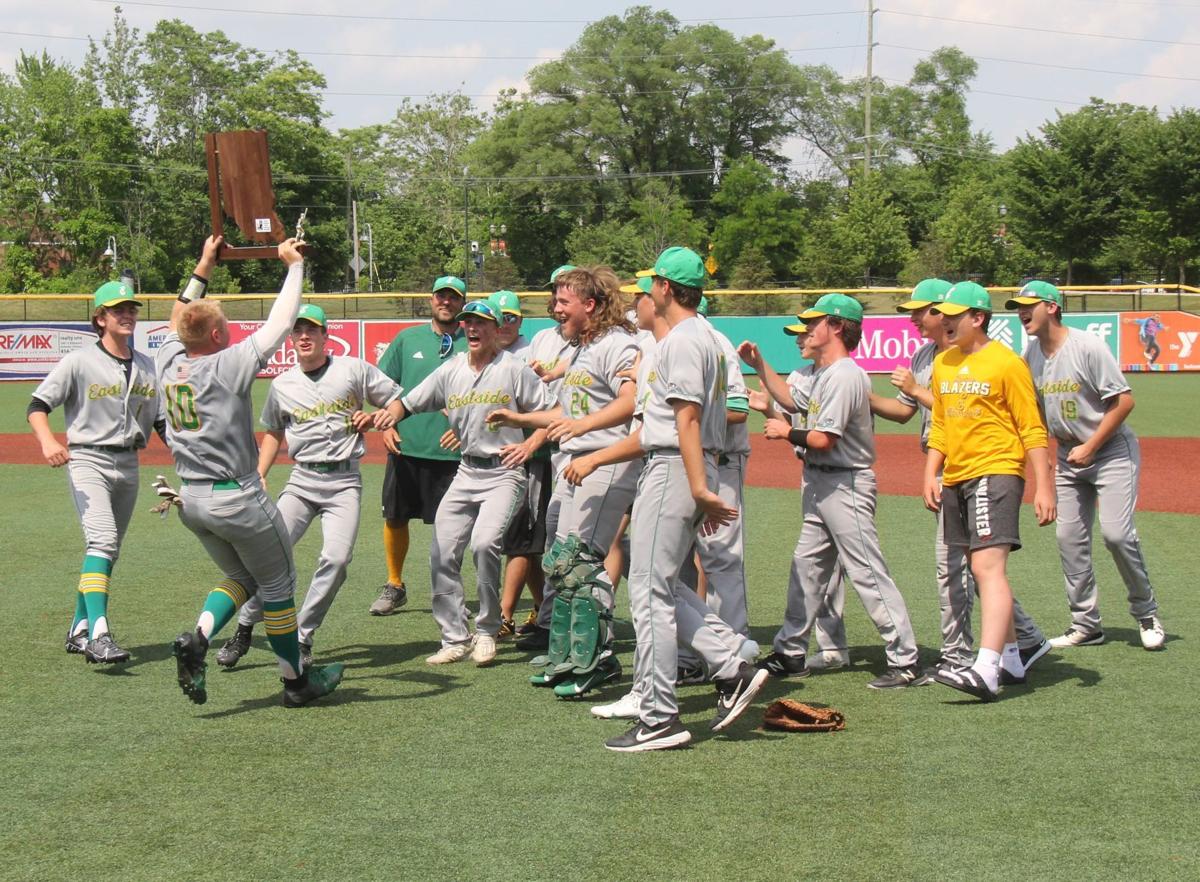 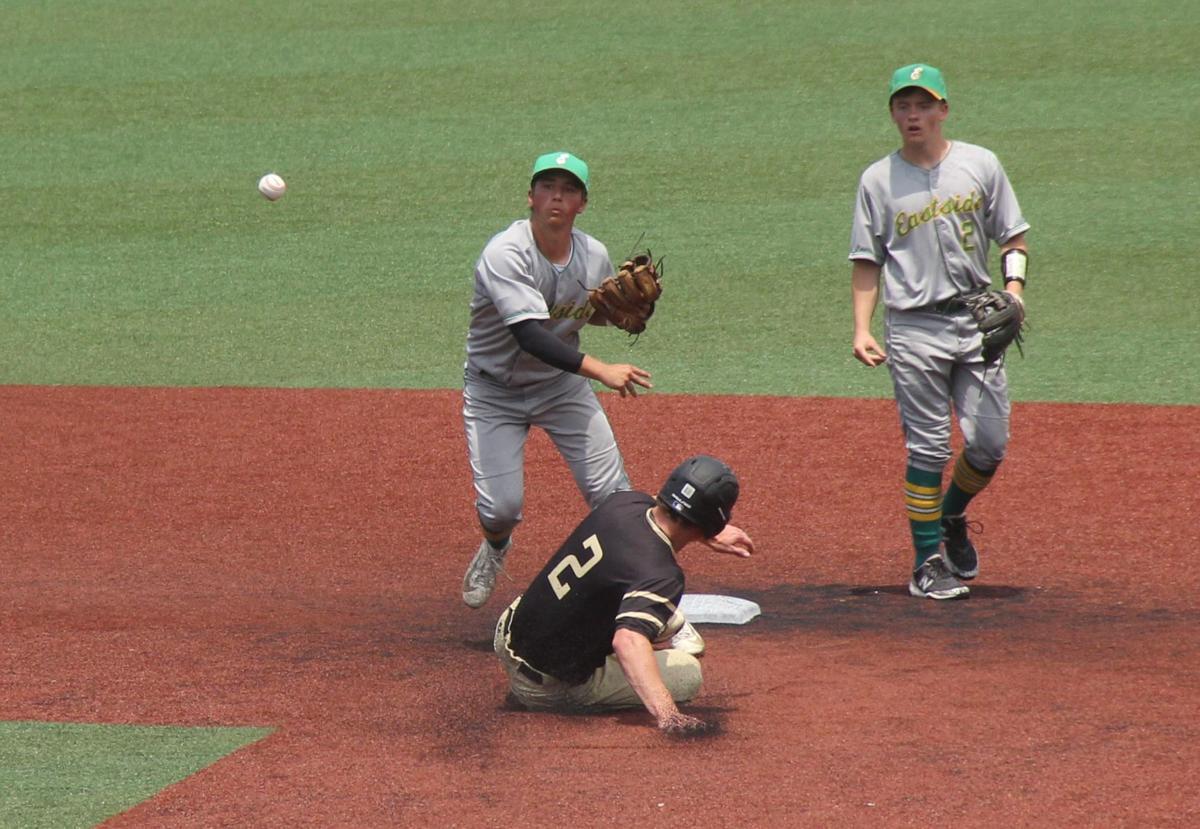 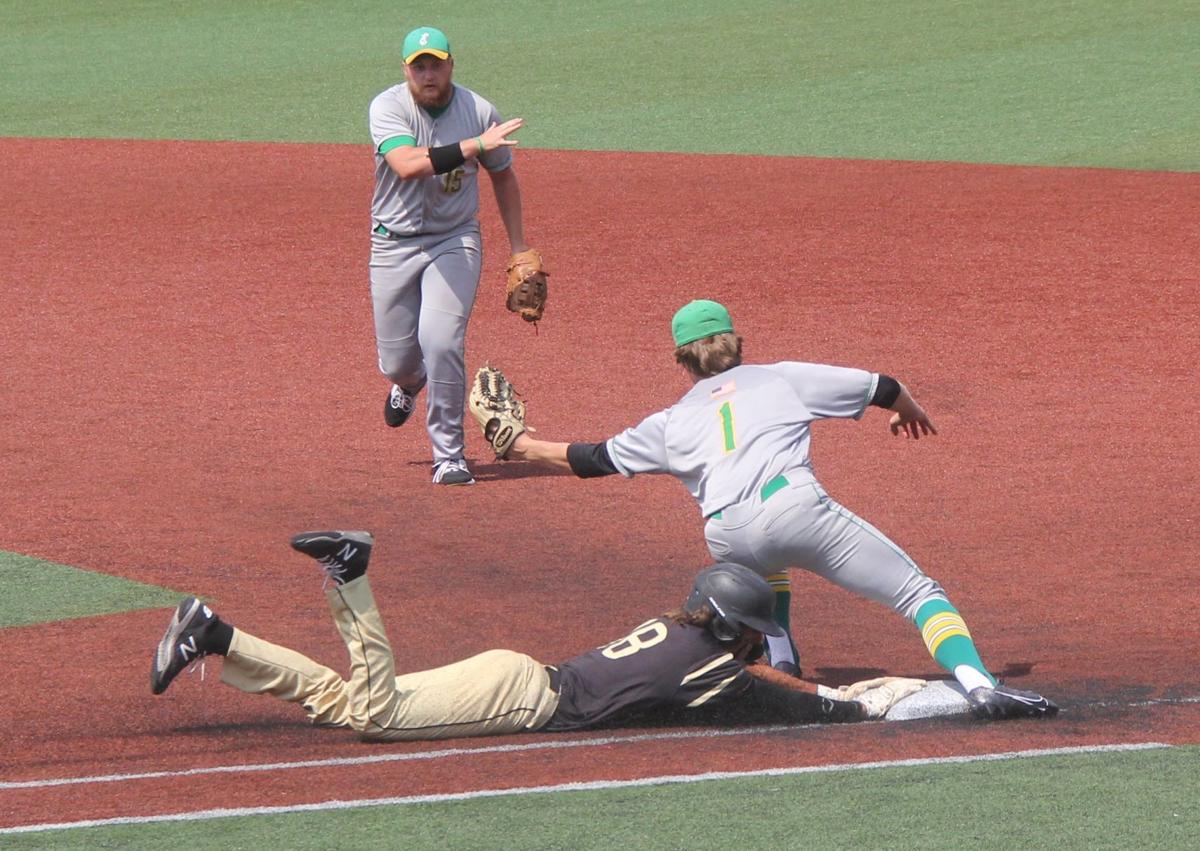 Eastside pitcher Owen Willard (1) takes the throw from first baseman Hayden Gardner to retire a Delphi runner for the final out in Saturday’s game at Kokomo. 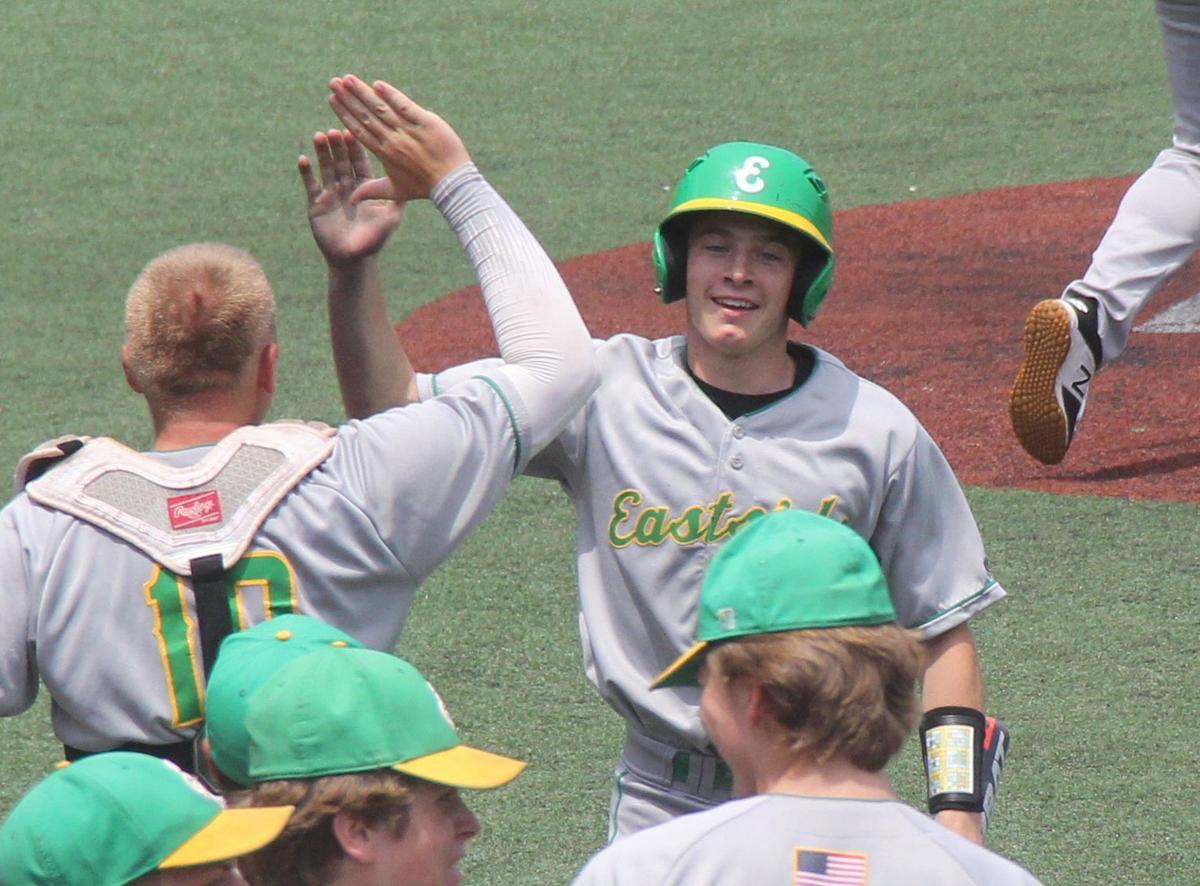 Eastside's Hugh Henderson is congratulated by teammates after scoring his team's first run in Saturday's game. 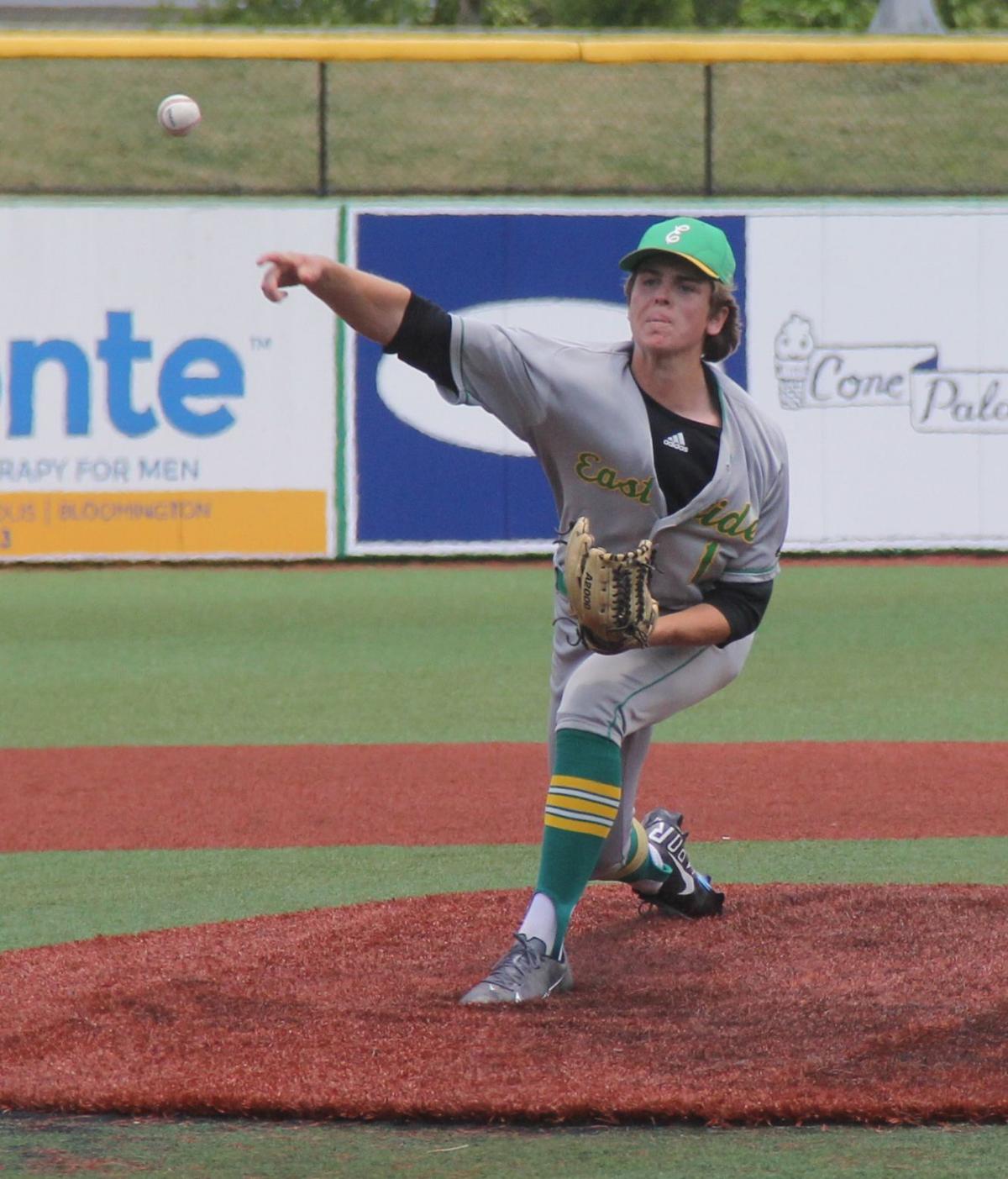 Eastside pitcher Owen Willard (1) takes the throw from first baseman Hayden Gardner to retire a Delphi runner for the final out in Saturday’s game at Kokomo.

Eastside's Hugh Henderson is congratulated by teammates after scoring his team's first run in Saturday's game.

KOKOMO — Eastside’s baseball team will get to write one more chapter to an already historic season.

The Blazers (26-6) defeated No. 4 Delphi 9-1 Saturday in the Class 2A North Semi-State at Kokomo’s Municipal Stadium.

They will play the Class 2A South Semi-State winner No. 2 Providence (21-6) in the state championship game at Victory Field in downtown Indianapolis either on June 21 or 22. Providence defeated University 14-1 in five innings Saturday afternoon in Mooresville.

It’s the first time an Eastside baseball team has reached the state finals.

“Our community’s going to be very, very excited. We might have to lock the town up in about a week and a half because I don’t know if there’s going to be anybody left in Butler.”

Willard’s son, junior pitcher Owen, tossed a two-hitter, striking out nine while walking five. He finished with 122 pitches — two over the 120-pitch limit — with the last three against the final batter of the game.

His bid for a third no-hitter this season ended when Delphi’s Gavin Gleason lined a single over shortstop with two outs in the sixth.

At the plate, Willard had an equally memorable day, going 4-for-5 with two doubles, a single and a triple, driving in two runs and scoring twice.

“It means everything,” the younger Willard said after the game. “Putting all this hard work and finally, it just pays off.

“I put in a lot of swings this week, so I think that helped. I saw the ball really well today,” he said. “I didn’t have full control of my fastball; I had a lot of walks. They put the ball in play and our defense helped us.

“We know it’s not done. We’re trying to get that state (title).”

Coach Willard said of his son, “He’s a competitor. He’s a winner deep down.

After Eastside’s first two batters were retired in the first, Dylan Hertig beat out an infield hit to the hole at short. Caleb Vanover hit one through the same spot.

Colben Steury took a 1-2 pitch into right field to bring in courtesy runner Hugh Henderson for a 1-0 lead.

Delphi’s first batter grounded back to Willard, but Jaden Long and Evan Fritz reached on walks. The Blazers got out of it as second baseman Liam Franz fielded a ground ball, stepped on second and threw to first for the inning-ending double play.

“I think that was the key to the game,” Aaron Willard said of the early lead. “(Delphi) came out and got two pop-ups right away. Then, we settled in and manufactured a run by putting the ball in play, and then Colben comes up big.

“That was good from a pressure standpoint to just get ahead,” he continued. “When we (stretched the lead) a little more, they didn’t even think about running, which is a big part of their game.”

The Blazers scored twice in the second. They broke the game open with four in the fourth and two more in the sixth.

With one gone in the second, Ryder Reed was hit by a pitch. Owen Willard laced as single to center, and when the ball got past the outfielder, Reed came all the way in to score.

Wade Miller walked, and he and Willard moved up when Gleason, Delphi’s starting pitcher, was called for a balk. Willard scored on Hertig’s sacrifice fly.

Willard drilled a triple near the 348-foot mark in left-center to start the fourth. That was the end of the day for Gleason, who exited after throwing 69 pitches. Relief pitcher Fritz walked Hertig and Vanover to fill the bases before Steury dumped a single into right to bring in Willard.

Hayden Gardner drew a bases-loaded walk to force in another run for a 5-0 lead. Jack Buchanan followed with a sacrifice fly to center to bring in one. Franz then sent one over the second baseman’s head to bring in Vanover to make it 7-0.

Delphi had the lead-off batter reach in the third, fourth and fifth innings but failed to advance him past first each time.

In the third, Carson Workinger walked, but the next three Oracles went down in order, including two strikeouts by Willard.

Fritz reached on an error to start the fourth, but Gleason hit into a fielder’s choice. The next two batters were retired on a fly ball and infield popup, respectively.

In the fifth, Jaden Roth walked, but Eastside turned its second double play of the game, turned by Steury on a grounder to the middle. Willard dealt a nasty curveball to set down Peyton Roth for the third out.

The Oracles got on the board when Chase Long followed Gleason’s hit with a double down the left field line. That brought in teammate Jaden Long, who drew a one-out walk. Willard struck out two in the inning to keep it 9-1 Blazers.

Willard struck out the first two in the seventh, before hitting Roth with a pitch. Smock grounded to first, with Eastside’s Gardner flipping to a covering Willard for the final out.