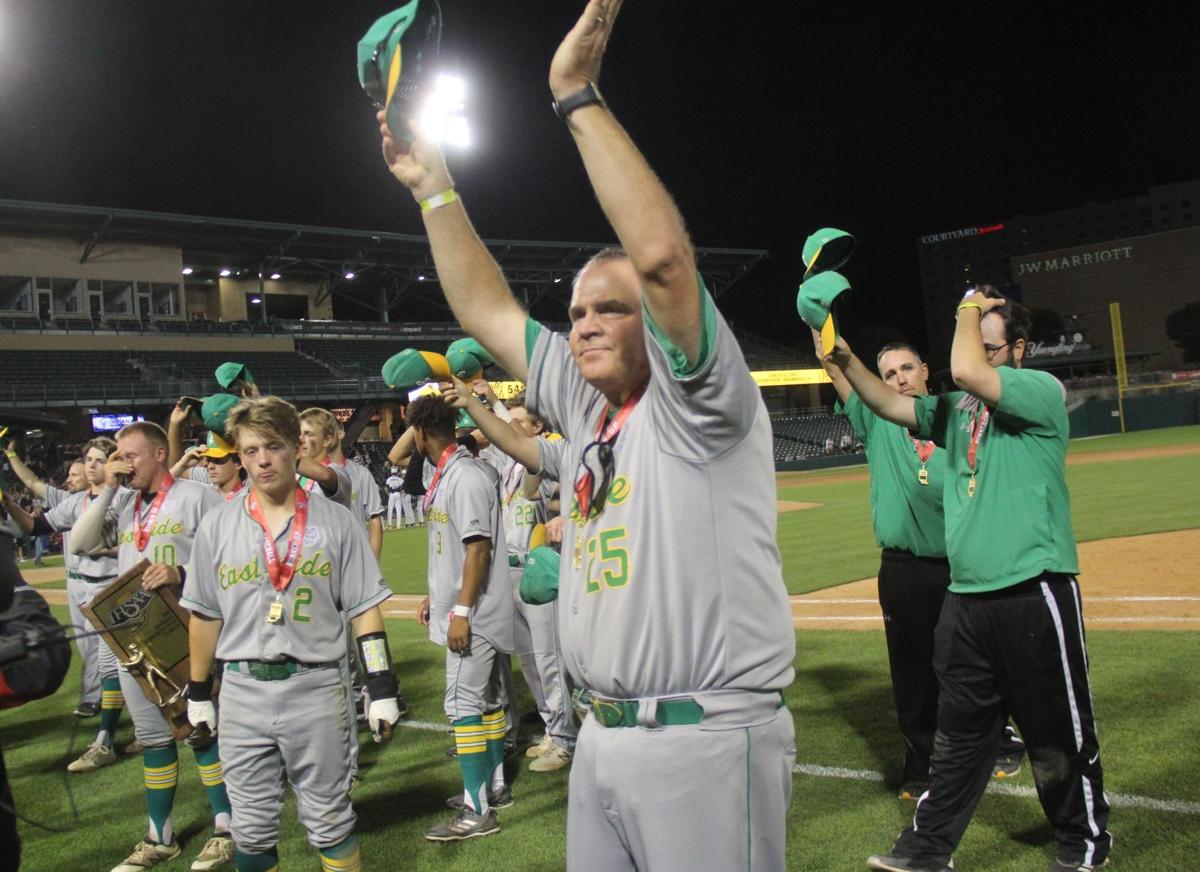 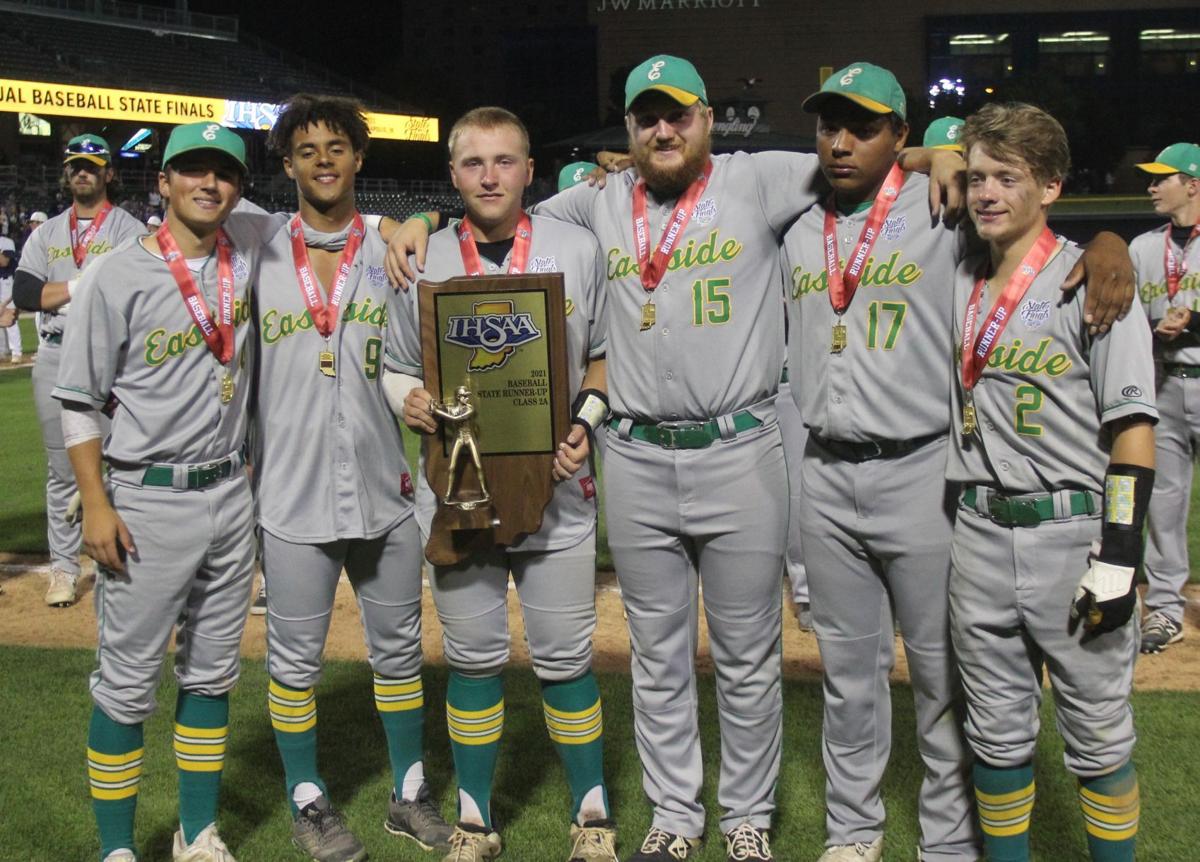 INDIANAPOLIS — The farther you get on the state tournament trail, the bigger an early run can be.

Providence put Eastside in unfamiliar territory — scoring in the first inning — and rode the pitching of senior Ray Reisigner for a 4-0 win in Monday’s Class 2A state championship game at Victory Field in Indianapolis.

Eastside senior and valedictorian Liam Franz — who is headed to Notre Dame — was named winner of the L.V. Phillips Mental Attitude Award.

Reisigner, who entered the game with 97 strikeouts on the season, fanned 11 Blazers, including six through the first three innings. He capped off the big night by striking out the final two Eastside batters of the game.

Reisigner proved the old baseball adage of good pitching stopping good hitting by shutting down an Eastside team that had put up big numbers throughout its post-season run.

“He hit his spots well and had good velocity,” Eastside head coach Aaron Willard said of Reisinger. “He threw his little slider, kept us off-balance and chewed up the outside part of the plate. He did a great job.”

The Pioneers (23-7) got timely hit after timely hit and made things tough for Eastside ace Owen Willard.

Such was the case in the first inning.

Eli Watson drew a one-out walk, stole second, and went to third when the ball got away. Willard got his mound counterpart to fly out to right for the second out, and had a 2-2 count on cleanup hitter Casey Kaelin.

Kaelin turned on Willard’s next offering, sending it down the left field line to bring in Watson with the game’s first run.

In the third, Willard got two quick outs, fanning Landon Kruer and getting Watson to pop up into short left field.

Reisinger doubled to right-center, and Kaelin sent Willard’s 1-0 pitch down the left field line again for his second double of the game and a 2-0 lead.

Eastside got out of a major trouble spot in the bottom of the fifth when the Pioneers’ Watson drilled a triple near the Jackie Robinson memorial marker in deep left-center.

Willard came back to fan Reisinger and Kaelin before enticing Jake Rodski to pop up on the infield to retire the side.

Reisigner retired the first 11 Blazers he faced until Dylan Hertig picked up a two-out hit in the fourth. Eastside wasn’t able to capitalize however.

They got another runner on — again with two outs — in the fifth when Jack Buchanan rolled one between the mound and third base and beat it out for an infield hit. Again, however, Reisinger stopped the Blazers in their tracks.

In the Eastside sixth, he retired the first two batters and seemed to be out of the inning but the Pioneer right fielder couldn’t glove Wade Miller’s fly ball near the line. Miller, running hard all the way, made it to third without a play.

Unfazed, Reisinger got Hertig to fly out on the next pitch to end the inning.

Providence led off the sixth with another triple — this time off the bat of David Newbanks — to almost the same spot as Watson’s in the previous inning.

This time, the Blazers wouldn’t get away unscathed.

Max Beatty hit one over the left fielder’s head for a double to bring in the run. Grant Borden was hit by a pitch.

With runners at first and second, Kruer laid down a bunt that rolled past the mound. Eastside third baseman Ryder Reed fielded the ball, and with Beatty rounding third, Reed threw home in time for Hertig to tag him at the plate.

Eastside intentionally walked Watson to load the bases, but Borden scored on a passed ball to make it 4-0.

In the Blazer seventh, Caleb Vanover popped up in foul territory. Steury reached on a dropped third strike before Reisinger fanned the next two to end it.

“It’s been a fun ride. Anytime you can get to this level, there’s no losers in my book,” Coach Willard said. “They beat us on the field, but I’m so proud of our kids, how we played throughout this tournament and how they conducted themselves on and off the field.”

After the team received its red ribbons, the Blazers waved their caps in salute to a huge throng of green-shirted fans who made the trip.

“Green came out didn’t they?” the Eastside coach said. “We had a lot of people (here). It’s been a buzz in our community. They’re going to love us no matter what.

“Everybody’s going to remember this,” he said. “We played so, so well during this run and through the regular season.

“I couldn’t have asked for anything more leading up to this game. They gave me everything they had.”