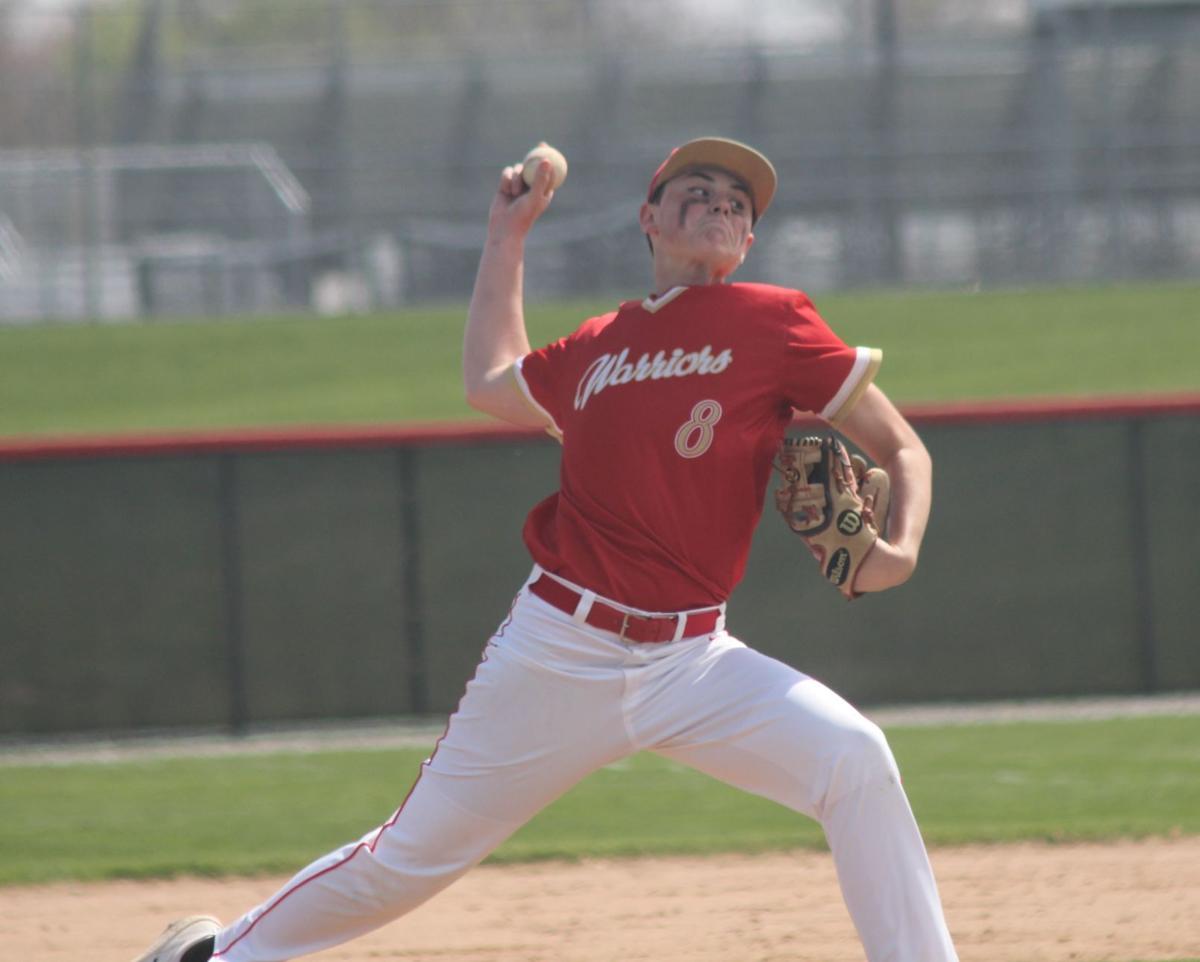 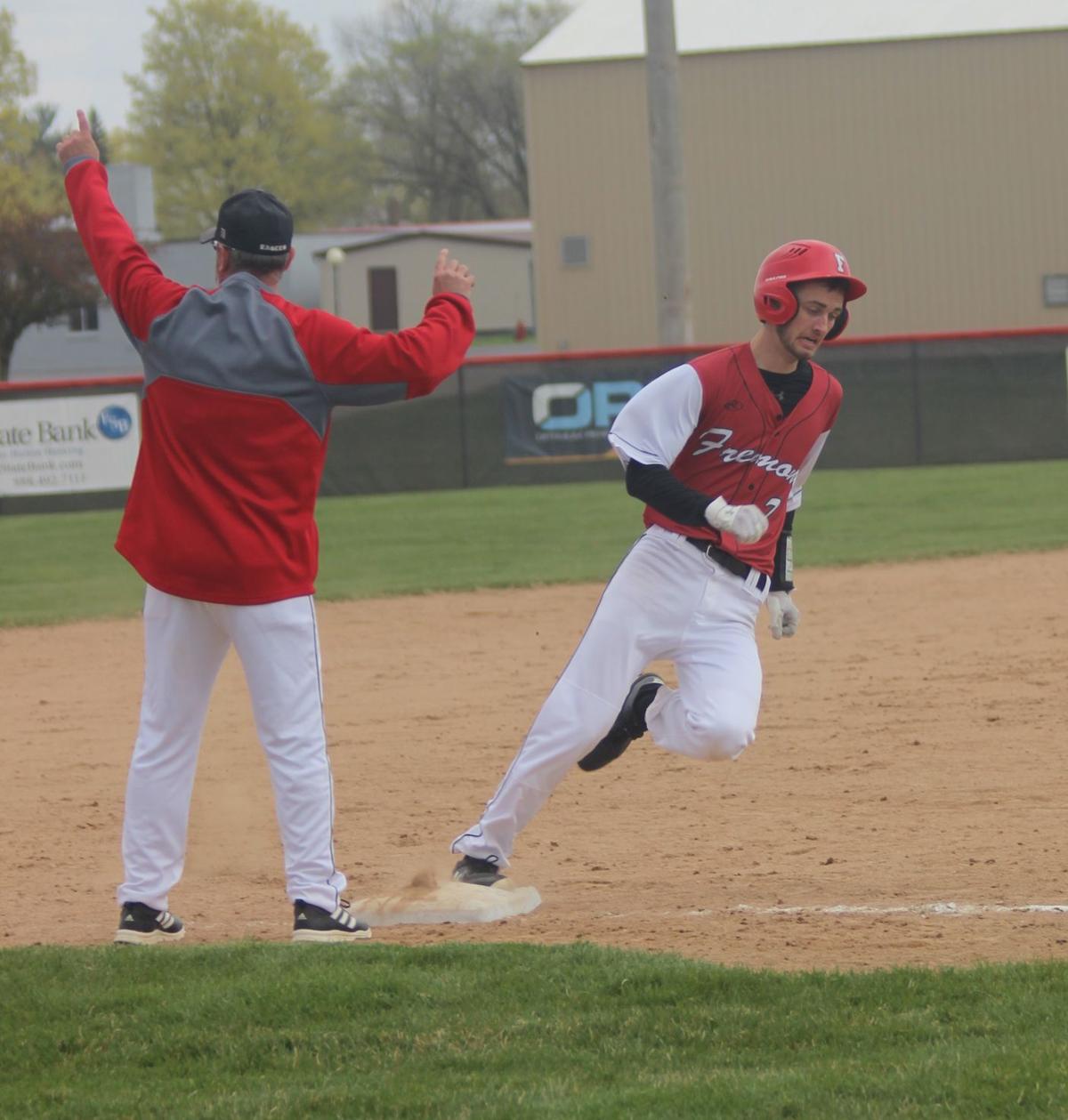 Fremont’s Ethan Bock touches third and heads for home in the bottom of the sixth inning Saturday afternoon against Westview as his father and Eagle head coach Justin Bock, right, provides direction for all of his baserunners.

Fremont’s Ethan Bock touches third and heads for home in the bottom of the sixth inning Saturday afternoon against Westview as his father and Eagle head coach Justin Bock, right, provides direction for all of his baserunners.

FREMONT — Westview gave the top half of the Fremont order too many chances on Saturday and the extra opportunity in the Eagles’ final at-bat bit the Warriors.

Fremont scored four runs after two outs in the bottom of the sixth inning to come back and beat Westview 6-4 in a key Northeast Corner Conference baseball matchup.

Senior Jaden Zuccolotto blooped a single to right just out of the reach of diving Warrior second baseman Matty Mortrud to score two runs and tie the game at 4.

Ethan Bock followed with a bunt single, then Nick Miller doubled to deep left to score Zuccolotto and Bock to put Class 1A seventh-ranked Fremont (4-2, 2-1 NECC) in front 6-4. That ended the day for Westview ace Takota Sharick.

Sharick was not able to smoothly get through the fifth inning after there was two out and a runner on. That helped the Eagles turn the batting order for a fourth time.

After Kameron Colcasure went from first to third on Zuccolotto’s sacrifice bunt that was the second out of the fifth inning, Sharick walked Bock, hit Miller with a pitch and walked Gabel Pentecost to score a run and cut the Warrior lead to 3-2. JT McDowell’s drive to leftcenter was caught to end the threat.

“Takota has played with a lot of my guys over the last couple of summers and he is competitive on the mound as we will see all year. We knew he was going to give us fits,” Eagles coach Justin Bock said. “I firmly believe we have four guys who are potential All-State caliber players (Colclasure, Miller, Pentecost and Ethan Bock) and I’m glad we were able to get them an extra opportunity.”

Fremont was fortunate and Westview (0-6, 0-3) was snakebitten by a couple Texas league bloop base hits along the way. Along with Zuccolotto’s two-run single, Eagle freshman Brody Foulk pinch hit for Remy Crabill and had similar good fortunes on the other side of the field to lead off the sixth. Foulk, who dressed in his first varsity game this season, fought back from behind in the count to Sharick and landed safely a few feet onto the outfield grass and near the foul line in left.

“Takota pitched well enough to win. He got first strikes 16 times. I trust in the only experienced pitcher we have going into this season,” Warriors coach Jason Rahn said. “They had one crooked number inning. They had a couple of duck snorts. Then Miller is one of the best players in the conference and put a great swing on it.

“We got to cut down on our strikeouts (8), but we weren’t bad. They executed the bunt when it was called and we didn’t get a bunt down.”

Freshman shortstop Braden Kauffman put the Warriors in front 3-1 with a two-run single to left with one out in the top of the fifth inning.

“Braden is our best contact hitter right now,” Rahn said. “He’s a stud at shortstop. He pitched in our third straight game and he throws strikes.”

Westview answered Fremont in the bottom of the fifth with a run in the top of the sixth. Matty Mortrud reached on an error, then scored on his brother Nick Mortrud’s double to left to put the Warriors up 4-2. Nick Mortrud ended up on third after a throwing error from the outfield. But Mortrud was left stranded at third after reliever Ethan Bock got two strikeouts with a weak groundout to third in between.

Bock pitched the final two and two-thirds innings in relief to get the win. He was also 2-for-3 with a walk.

“You never take a win against Westview for granted,” Justin Bock said. “Jason is a great coach and they will be just fine. Nick Mortrud is one of the best leaders I’ve ever been around.”

Rahn said, “Right now, the record is misleading. We have a young team. It looks like we are rebuilding, but that’s not how we feel. We have talent in our dugout. We just have to put a complete game together.”