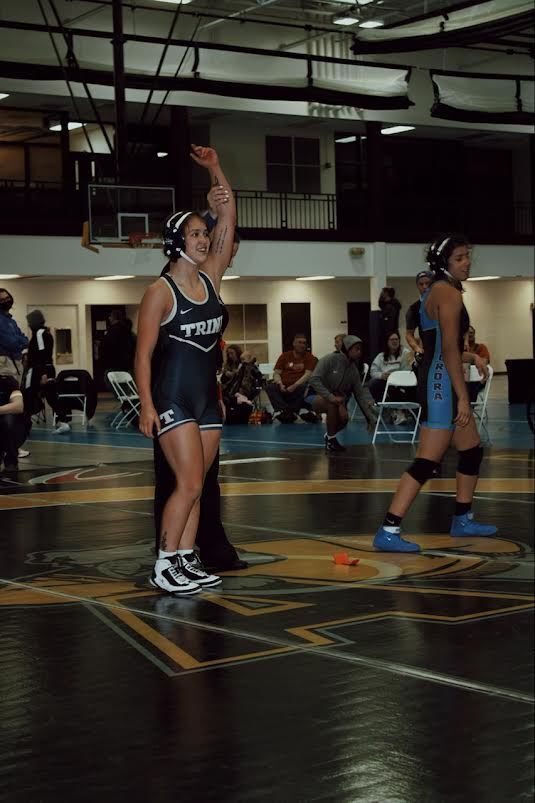 Trine’s Riley Morrison has her hand raised in victory after a match in her freshman season last year. 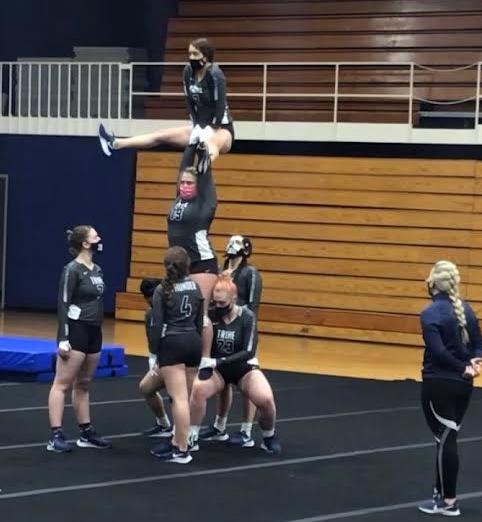 Riley Morrison is lifted into the air during an acrobatics and tumbling routine her freshman season.

Trine’s Riley Morrison has her hand raised in victory after a match in her freshman season last year.

Riley Morrison is lifted into the air during an acrobatics and tumbling routine her freshman season.

ANGOLA — Most student-athletes know what it’s like to juggle both the academic and social pressures on top of an athletic career in high school or college.

In a select few cases, that pressure is slightly increased when a student-athlete competes in multiple sports, especially when their seasons overlap.

In the case of Trine sophomore and exercise science major Riley Morrison, that is exactly the case.

Morrison also competes in women’s wrestling and the acrobatics and tumbling programs, two very different sports, for the Thunder in addition to taking classes at Trine and being in the Air Force Reserve Officer Training Corps,

Morrison first decided to give wrestling a shot after it was introduced as a new program her sophomore year at Princeton High School in Princeton, Texas.

In addition to wrestling, Morrison played soccer throughout middle and high school, and she was a cornerback for the Princeton football team for three years, but said she later dropped them after falling in love with the sport.

In turn, she became a three-time podium finisher at the Texas state tournament, including a third-place finish in 2018 and a sixth-place finish in 2020. It was the state tournament her senior year where she met current Athletic Director of Compliance Dan Callahan, former Trine men’s wrestling coach and assistant athletic director at the time, who, according to Morrison, guided her to the right place for the Thunder.

In her first season with Trine, Morrison competed in the National Collegiate Women’s Wrestling Coalition National Tournament in the 109-pound weight class, finishing with a record of 1-2 but coming up just short of achieving All-American status.

Last season wasn’t only Morrison’s first for the Thunder, but it was also Trine’s first for its women’s wrestling program. Unfortunately, due to COVID-19, injuries and other technicalities a season ago, Morrison was the only active wrestler for Trine despite having another listed on the roster.

Because of this, Morrison missed the team atmosphere of sports, which led her down the path to acrobatics.

“I realized, looking at the screens and all the projectors around campus, that there were signups for acrobatics and tumbling,” Morrison said. “I was just wondering how big the program was and I needed something else take my mind off stuff. I went to the first practice, and I felt so welcomed by the girls there. Joining acro made me a lot of friends.”

Not only did Morrison make many friends within the acrobatics program, but she said participating in the sport has also helped her to become a better wrestler.

“Just based on the fact that it’s made me more mobile and more flexible, it’s really pushed me to do even crazier stuff that I had done for tumbling,” Morrison said. “Wrestling is my love and pride, but acrobatics has been there for me for the past two years in college and it’s really been helpful for me.”

Morrison said she has to approach both sports differently.

“Wrestling happens a lot faster,” Morrison said. “When you’re in a wrestling match, you’re thinking of the next step that’s going to happen just because it’s a six-minute match. At an acrobatics meet, you’re given more time to think about what you’re doing. It’s more about knowing what position you’re going to be at before you even get there. It’s slower in some way but still mentally taxing.”

While the wrestling season is in full swing, with Morrison finishing in seventh place at the Adrian Open Nov. 14 and second place at the Albion Invite Nov. 20, the acrobatics and tumbling team is in practice mode for when its season kicks off Feb. 4.

Morrison said that although she might worry about a conflict between the two with overlapping seasons, she has her priority set.

“I love acro, but all in all, I am a wrestler, Morrison said. “Coach Katie [Horstmann] is very understanding of that, but I don’t let me being more of a wrestler affect my contribution to the team because I know in the long run that the acrobatics team has been there for me, so all I can do is be there for them.”

Even with her prioritization of wrestling, Morrison said she gives both sports equal time and constantly keeps her coaches in the loop about other practices and classes.

While she doesn’t really have any plans for acrobatics after Trine, Morrison said she would love to be a wrestling coach in the future, while carrying over a thing or two from her time with the acrobatics team.

“I can use what I’ve learned through acrobatics with the body control positions and carry it over into wrestling,” Morrison said.