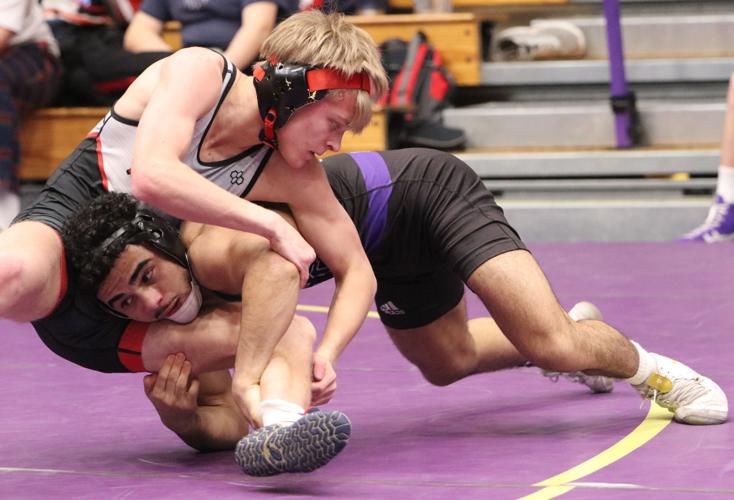 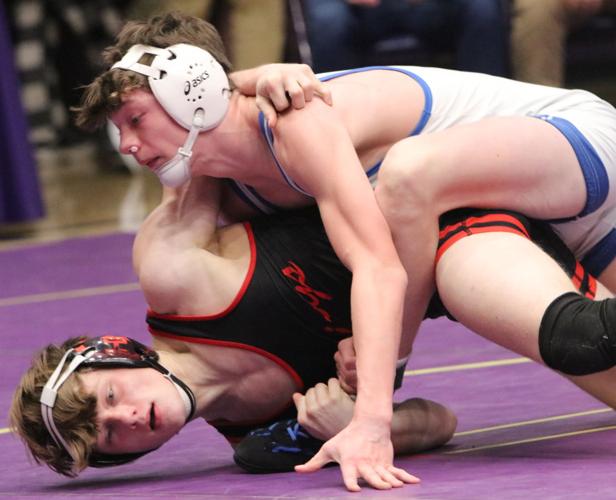 Rylee Biddle of East Noble, top, has the advantage against Devin Spencer of Huntington North during the NE8 Conference Tournament Saturday at New Haven. Biddle won to take first place. 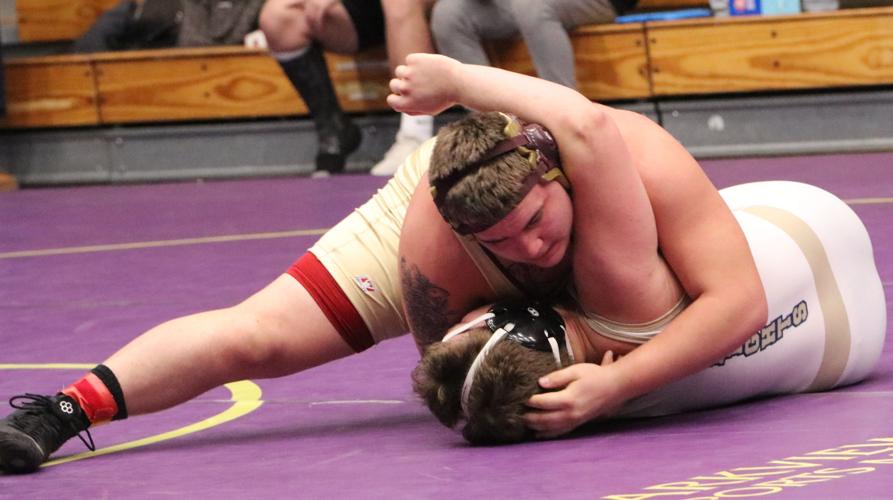 Rylee Biddle of East Noble, top, has the advantage against Devin Spencer of Huntington North during the NE8 Conference Tournament Saturday at New Haven. Biddle won to take first place.

NEW HAVEN — Wrestlers in the Northeast 8 Conference got one more day of tough competition to prepare for what really counts Saturday.

With the sectionals set for next week, teams got a glimpse of how ready they are and what they might have to fine tune.

While Bellmont took first place in the tournament, DeKalb, East Noble and Columbia City all made some noise by winning two weight classes apiece.

East Noble junior Blake Byerley (18-0) stayed perfect for the season with a championship at 113 pounds. He pinned Karrington Cooper of New Haven in the first period of the finals.

Freshman Rylee Biddle (21-12) started his varsity career with a bang, also winning by pin at 138 over Huntington North’s Devin Spencer.

“We weren’t bad,” East Noble coach Sam Riesen said. “We let some matches slip away. We talked about every match matters. Obviously we’re disappointed we let a few slip away that we thought we could have had. That’s wrestling for you.

“Overall we wrestled OK, but we’re a little disappointed. We thought we had a shot at getting the title this year.”

The Knights had one other finalist, sophomore Kaelan Fuller (18-5) at 106, but he lost to Norwell’s Hunter Douglas in the final.

“Next week’s the big one (the sectional at West Noble). It’s going to be interesting,” Riesen said. “Us, DeKalb, Angola are probably the favorites. Prairie Heights looked good this week. It’s whoever shows up and wrestles.

“I’ve coached long enough to know that whoever’s hot that day, whoever has their team ready to perform is going to be the one to come out on top. Hopefully we’re ready to perform next week.”

“I was feeling pretty confident. It was tougher than I expected and but I came out on top,” Chase said. “I was the No. 1 seed but I don’t want to get ahead of myself at all. Anything can happen in this sport.”

Braylon Meyer (20-2) then took the mat and scored a 12-4 major decision over Brayden Clauser of New Haven in the 126-pound final.

“He’s a solid kid,” Meyer said. “The way that he wrestles is kind of funky, he could do damage if I wasn’t smart. I was calm. I didn’t try to run up the score like I could have. I did what I had to do.”

DeKalb had two other wrestlers in the finals. Braxton Miller (25-2) lost to an Indiana wrestler for the first time, dropping a 2-1 decision to undefeated Luke Teusch (35-0) of Huntington North. Miller’s only other loss came to a Findlay, Ohio, opponent in the Defiance Border Wars over Christmas break.

Elijah Knepper (27-7) lost by technical fall to Bellmont’s Gavin Davis in the final at 152.

Columbia City’s winners came in the upper weight classes. Justice Goree (16-7) pinned Stuart McCabe of Norwell in the third period of the final at 182. The Eagles’ 285-pounder, Jack Maley (20-5), finished the day’s competition with a third-period pin of Norwell’s Hudson Kahn.

“We wrestled really well for as young as we are,” Columbia City coach Blane Culp said. “We competed. We were 20 points out of second even though we ended up sixth. That’s how tight the team scores were today.

“We had some wins we flipped from the duals, and we keep getting closer with those guys that got second. It was a nice job by the kids that won it. We’re battling and we’re getting better.”

Vincent Parke (24-7) placed second for the Eagles, dropping a 6-3 decision to Keagan Martin of Bellmont in the 220-pound title match. Tanner Reed (30-2) lost by pin to Bellmont’s Duke Myers in the 170 final and also placed second.