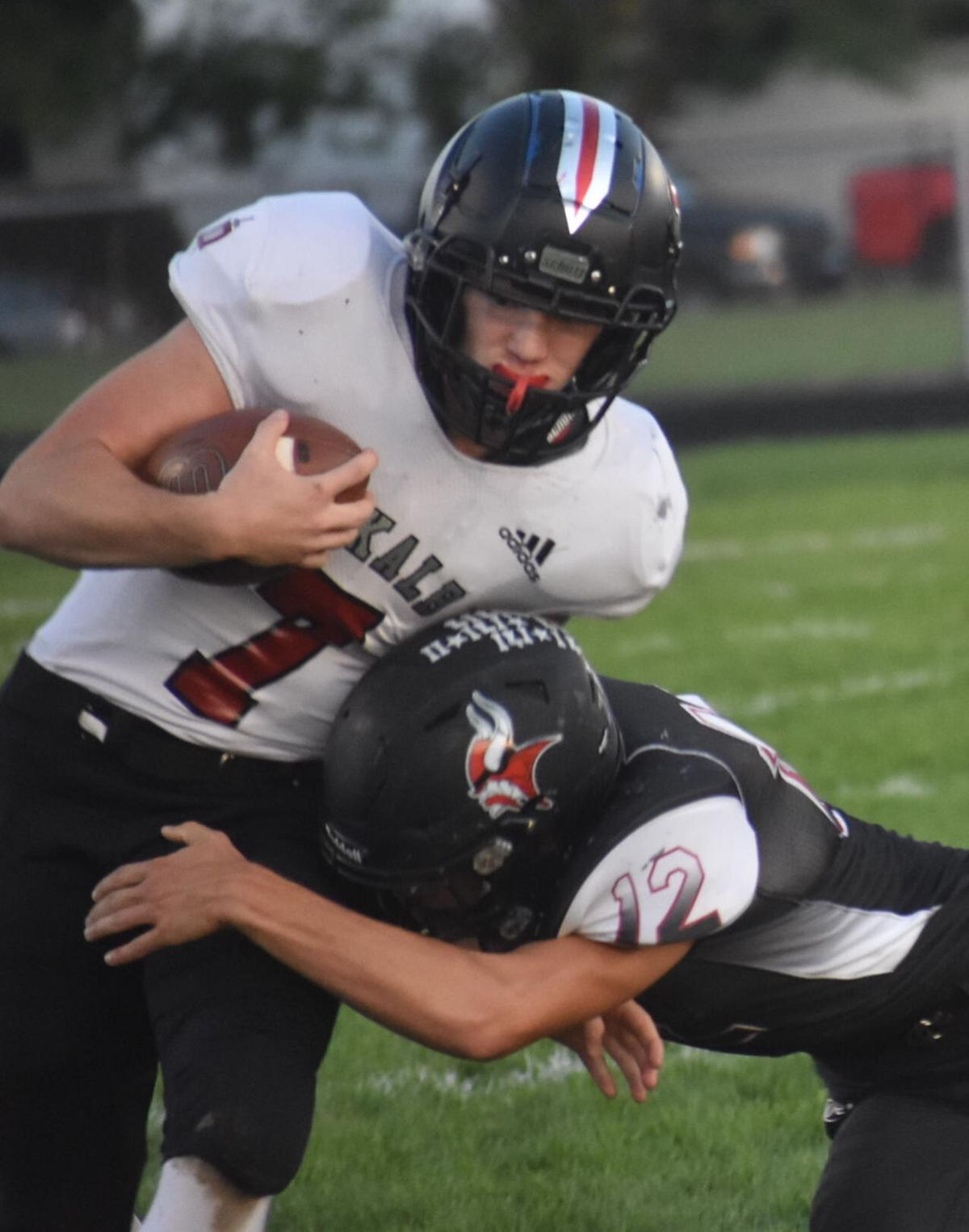 DeKalb’s Mitch Snyder, left, tries to get past a Huntington North tackler during Friday night’s game. 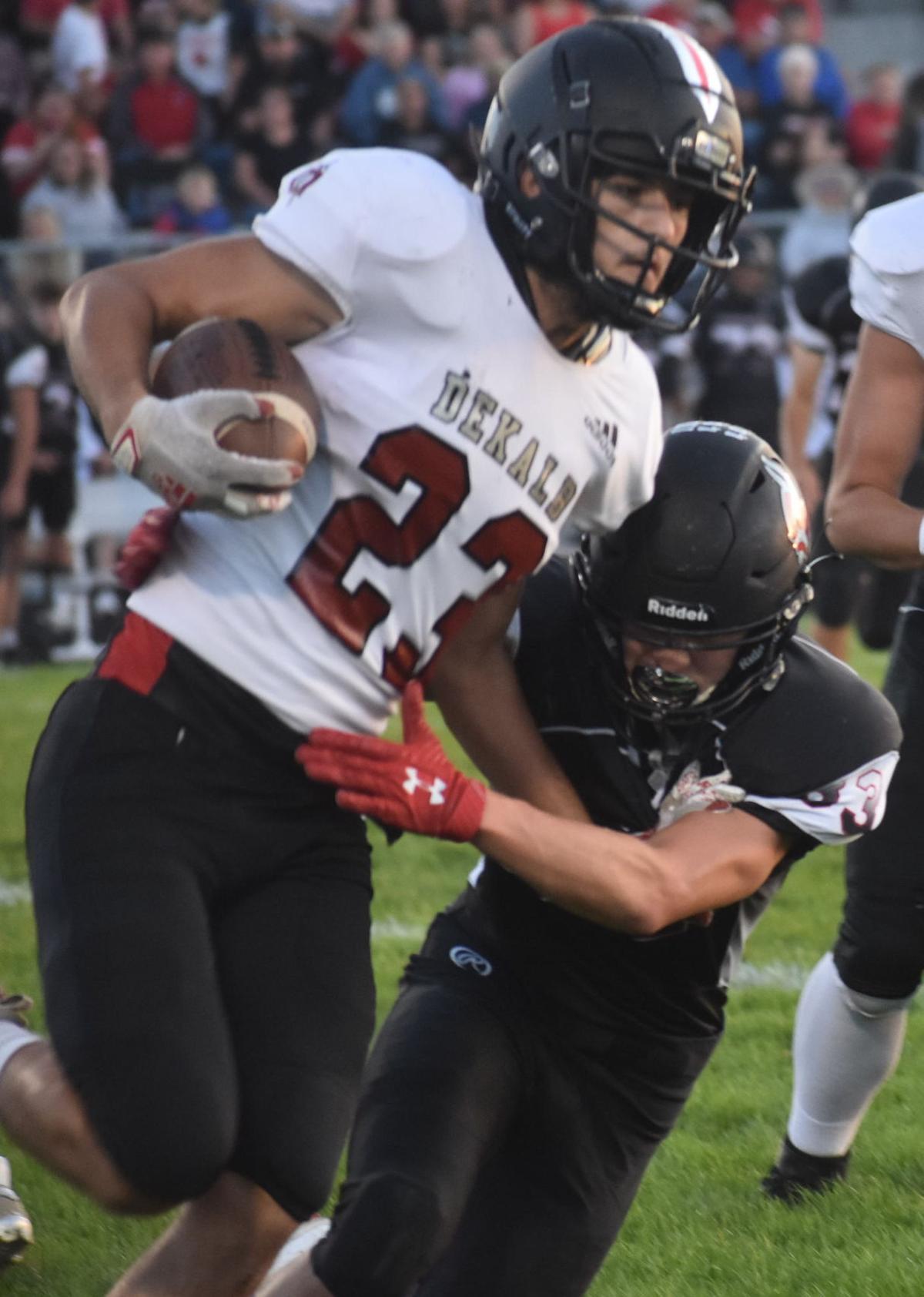 Nate Williams of DeKalb turns upfield on a kickoff return during Friday’s game at Huntington North.

DeKalb’s Mitch Snyder, left, tries to get past a Huntington North tackler during Friday night’s game.

Nate Williams of DeKalb turns upfield on a kickoff return during Friday’s game at Huntington North.

They won’t soon forget it.

Twice three scores down, including at the start of the second half, the Barons fought their way back with a red-hot passing game, and when they pulled within a point with 2:13 left, they decided to go for broke.

Tegan Irk had completed 10 previous passes to Donnie Wiley, and this time found him over the middle in the end zone, lifting the Barons to an improbable 50-49 Northeast 8 Conference win that dampened Huntington North’s homecoming.

The Vikings, who will play at a new facility starting next season, drove to the DeKalb 33 as quarterback Kegan Landrum connected on five consecutive passes.

After the Barons just missed an interception on second down, Blayde King sacked Landrum from the backside for a 3-yard loss, putting the game in the balance on fourth and eight.

Landrum threw a high-arching pass down the middle, two Barons leaped for it, and it was slapped to the turf, and the DeKalb celebration began.

Wilcox called a frantic timeout before the deciding two-point conversion play, running a 50-yard dash down the sideline. There was no doubt that’s what the Barons wanted to do.

“I asked our O-line coach, and he said go for two. I asked every senior and every senior said ‘Two, no doubt,’” Baron coach Seth Wilcox said.

“I couldn’t be more proud of the way our seniors led this week. We’ve been waiting for them to step up and lead. That was a big part of what happened in that second half. The seniors led in the locker room at halftime, they were vocal on the field in the second half.

“We’ve seen glimpses of it all season long, when we’re down big and we’re not quitting, and we knew we had the ability to get them the second half.

DeKalb’s comeback capped an incredible offensive show in which the teams combined for 1,050 yards.

Huntington North had 386 rushing yards, including 165 from sophomore Noah Wagner, whose 57-yard scoring run had the Vikings up 42-21 three plays into the second half.

DeKalb countered with a big night through the air. Tegan Irk was 22 of 30 for 297 yards and five touchdowns. Wiley, whose catch on a 4-yard fade set up the fateful two-point play, had 10 catches for 161 yards and three scores, plus the two-point conversion.

While the Barons gave up big numbers, their defense made some big plays. Nate Williams scored on a 32-yard pick six that cut the lead to 42-35 in the third quarter.

A 75-yard scoring drive put the Vikings back up by two scores, but after a DeKalb drive stalled out deep in Huntington North territory, the DeKalb defense made stops on third and one and fourth and one at the 25, with Snyder making the hit on fourth down.

DeKalb took advantage of the short field with Irk’s second scoring toss to Wiley, making it 49-42.

The winning points were the result of an 81-yard, 16-play drive that used more than five minutes off the clock. Irk converted a fourth and two with a 13-yard strike to Derek Overbay at the Huntington North 6.