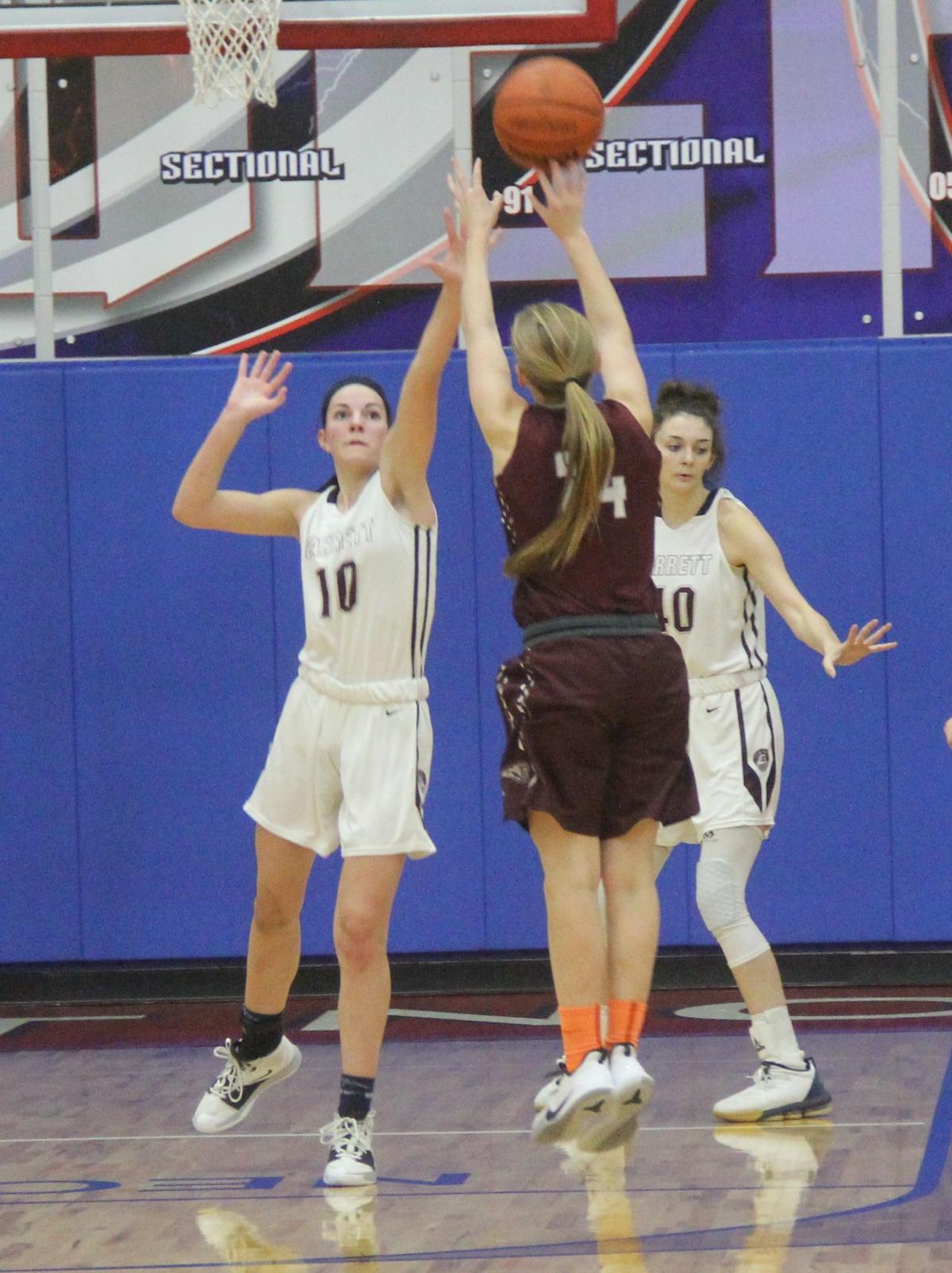 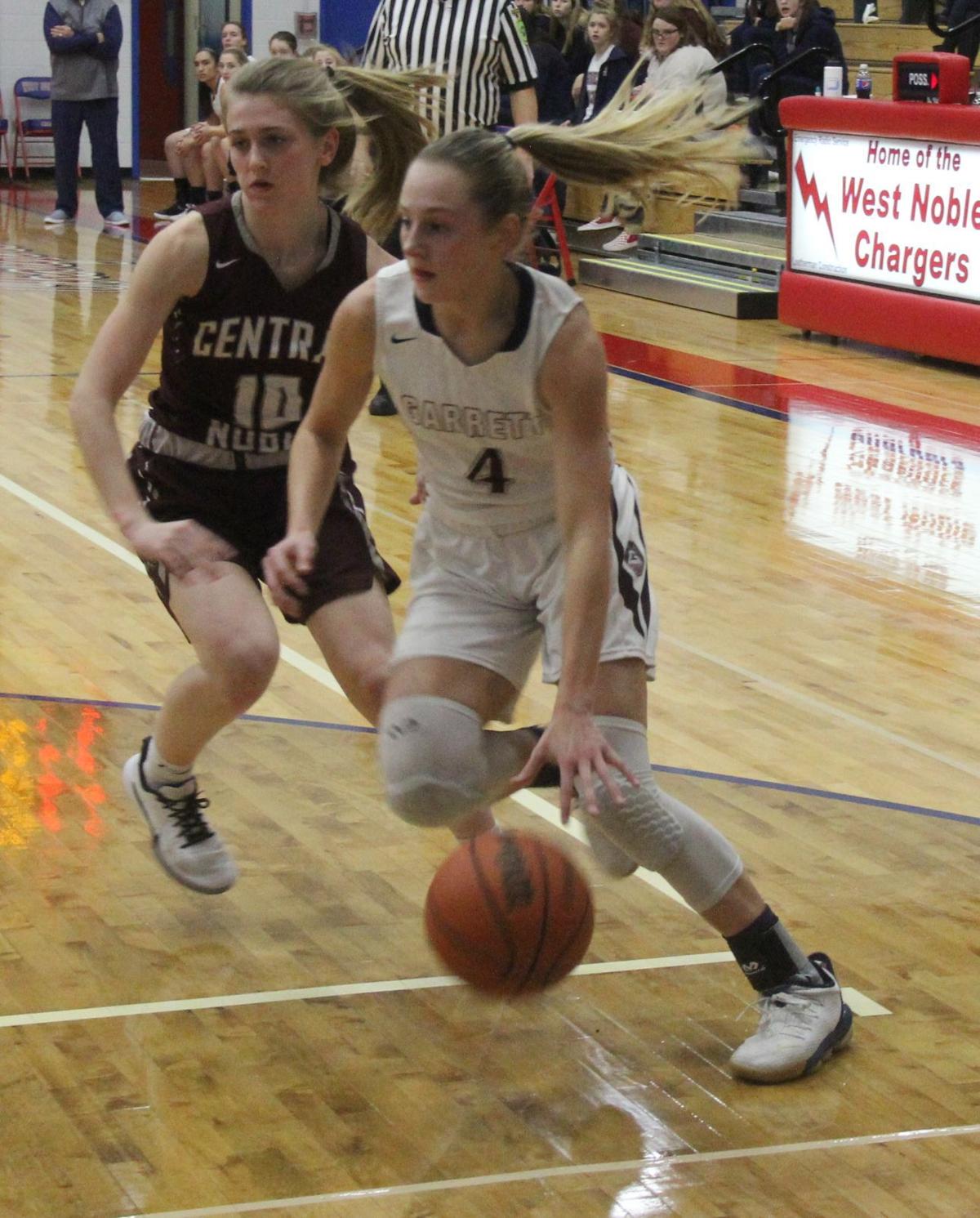 On Jan. 14, the Railroaders topped West Noble 45-37. In the quarter-final round the following night at West Noble High School, Garrett came up short in a 38-35 loss to Central Noble.

Against West Noble, the Railroaders took awhile to get things going offensively, but when they did, they were hard to stop.

West Noble (6-11) was led by Lilly Mast with 23 points and six from Jazmyn Smith.

Mast had a personal 10-0 run to start the second quarter, including back-to-back three-pointers, to put the Chargers up 19-10 with 5:09 left in the period.

After a timeout by Garrett coach Bob Lapadot, his team refocused and executed the game plan.

“I thought when we followed the scouting report, we played really, really well,” Lapadot said. “When we wanted to play the way we did in the first quarter and to start the second quarter, we got what we deserved, which was a beatdown.”

Once the Railroaders started defending the three-point line better, the Chargers struggled to hit shots from out there. They only hit one more triple the rest of the game after Mast’s second one.

The Railroaders cut the lead to three before halftime with a pair of threes from Kelham.

On offense, Garrett was able to penetrate inside and get contact, drawing multiple fouls to start the second half. Four straight trips to the foul line gave the Railroaders back the lead with five minutes left in the quarter. Then Armstrong extended the lead with a three to 24-19.

“When they’re in that zone and they’re all coming up, we didn’t throw the ball inside. When we did, we missed some shots,” Lapadot said. “Then, we just started sticking the ball above our heads and freezing it. We got into our motion going around Morgan inside. We also executed our trap offense when we got those threes from Bailey in the second quarter. That was there all night long. That’s when the ball movement starting going and the people movement followed.”

The Chargers’ only points of the third quarter came from the free-throw line, where Mast hit a pair with 4:01 left.

Kelham scored two more times in the third to give Garrett a 28-21 lead going to the final quarter.

Once the Railroaders got into the bonus, a parade of free throws ensued in the fourth. They were 11-for-19 in the final period and 17-of-31 for the game.

Garrett pushed the lead to double digits with a couple of free tosses from Richards, but the Chargers kept fighting until the very end. They closed the gap to seven on Mast’s final three of the night with 30 seconds to go, but couldn’t cut into the lead any more.

The following night, Garrett trailed the entire way except for 50 seconds against Central Noble. The Cougars won despite a dismal 3-of-16 (19 percent) showing at the free throw line.

Garrett’s only lead of the game came on Nataley Armstrong’s three-pointer from the left wing with 2 minutes, 54 seconds left in regulation.

Central Noble freshman Meghan Kiebel answered with a bomb of her own to put her team right back on top, 35-33.

In the final 33 seconds, the Cougars missed the front ends of three bonuses, and the first of a two-shot foul.

With the Cougars leading 37-35 with 1.9 seconds left, Armstrong drew a foul on a drive. Her first shot was no good. Needing to miss the second shot for a possible rebound, her attempt didn’t draw iron, and Central Noble got the ball back.

Central Noble led 14-9 after the first quarter and 20-18 at halftime on the strength of double-digit offensive rebounds. Bridgette Gray gave her team a seven-point lead early in the second.

Garrett (13-5) got even on two free throws from Faith Owen and a three-point play by Bailey Kelham with 2:12 left in the half.

A rebound score by Lydia Andrews put the Cougars back on top, and she later scored in transition. Garrett’s Abby Weaver closed out the first-half scoring with a bucket in the paint. Central Noble led 20-18 at the break.

Neither team could score in the third until Andrews finally got a three to go down from the left wing with 2:51 left. Garrett’s Kelham answered with one of her own seconds later. Andrews knocked down a jumper to the right side of the key before the quarter ended with the Cougars up 27-24.

Early in the fourth, Kelham drove the lane and missed. Garrett coach Bob Lapadot felt there was contact on the play, but didn’t get the foul call he wanted. When he protested too much, he was given a technical foul.

Andrews made one of two free throws. On the ensuing possession, the Cougars scored to extend the lead to six.

One free throw from Morgan Ostrowski and a three-point play by Kelham with 5:02 to go cut the deficit to two, and Kelham tied it with two free throws with 3:43 to play.

Cougar freshman Madison Vice made a pretty reverse scoop shot under the bucket at the three-minute mark to make it 32-30.

“In the first half, (Central Noble) was more aggressive than we were,” Lapadot said. “We were doing some weird things as opposed to blocking out and trying to rebound.

“To start the second half, we played really good defense and rebounded, and just came down and did some silly things on offense that kept us from scoring.

“It stayed a two-point game forever,” he said. “Then, the rebounding came back to bite us in the end. They didn’t score, but it took time off, took possessions away from us and added fouls.

“We controlled the boards the last time we played them; they wanted it more than we did.”

Andrews led Central Noble with 12 points and Gray finished with 11.