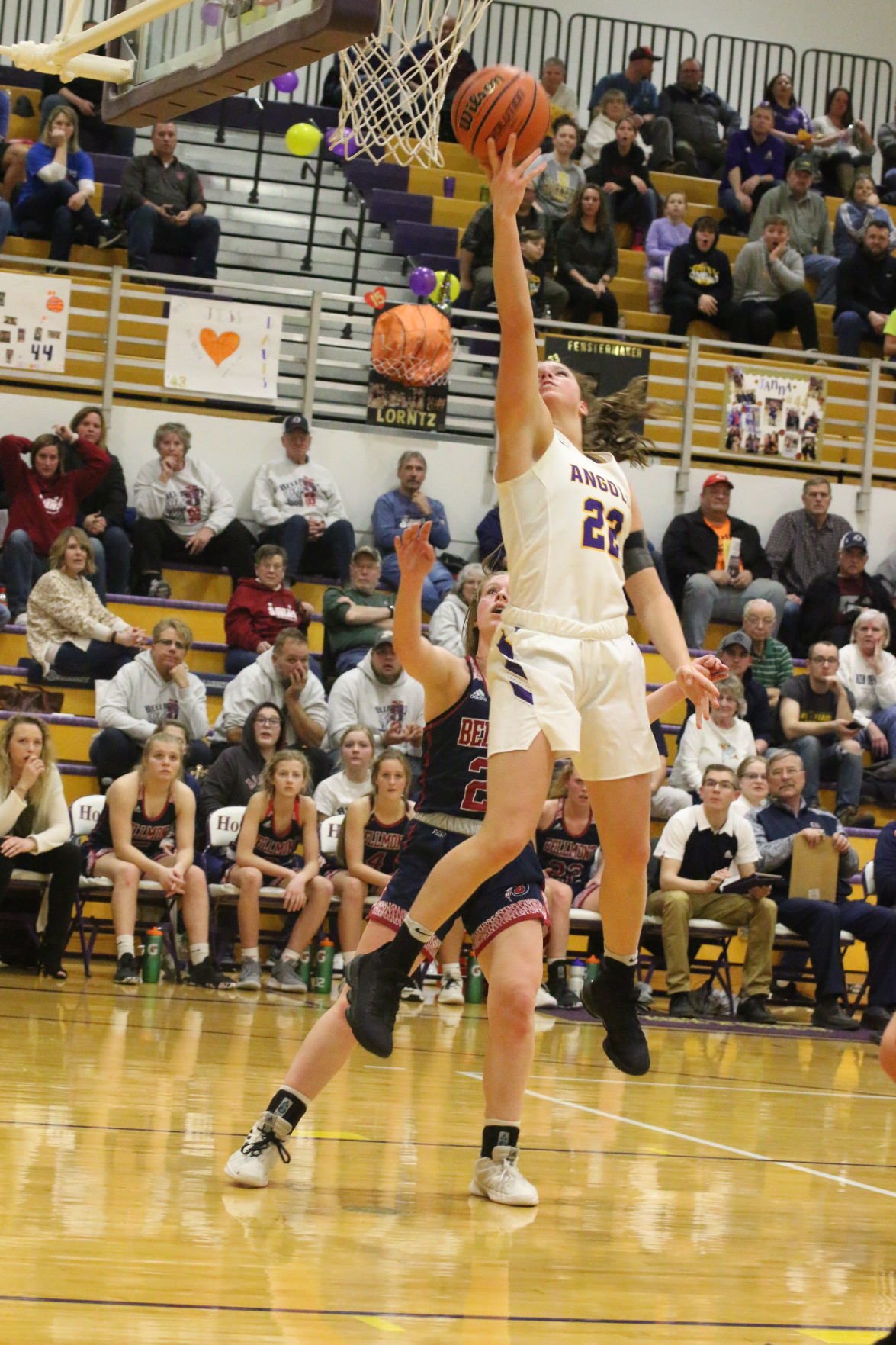 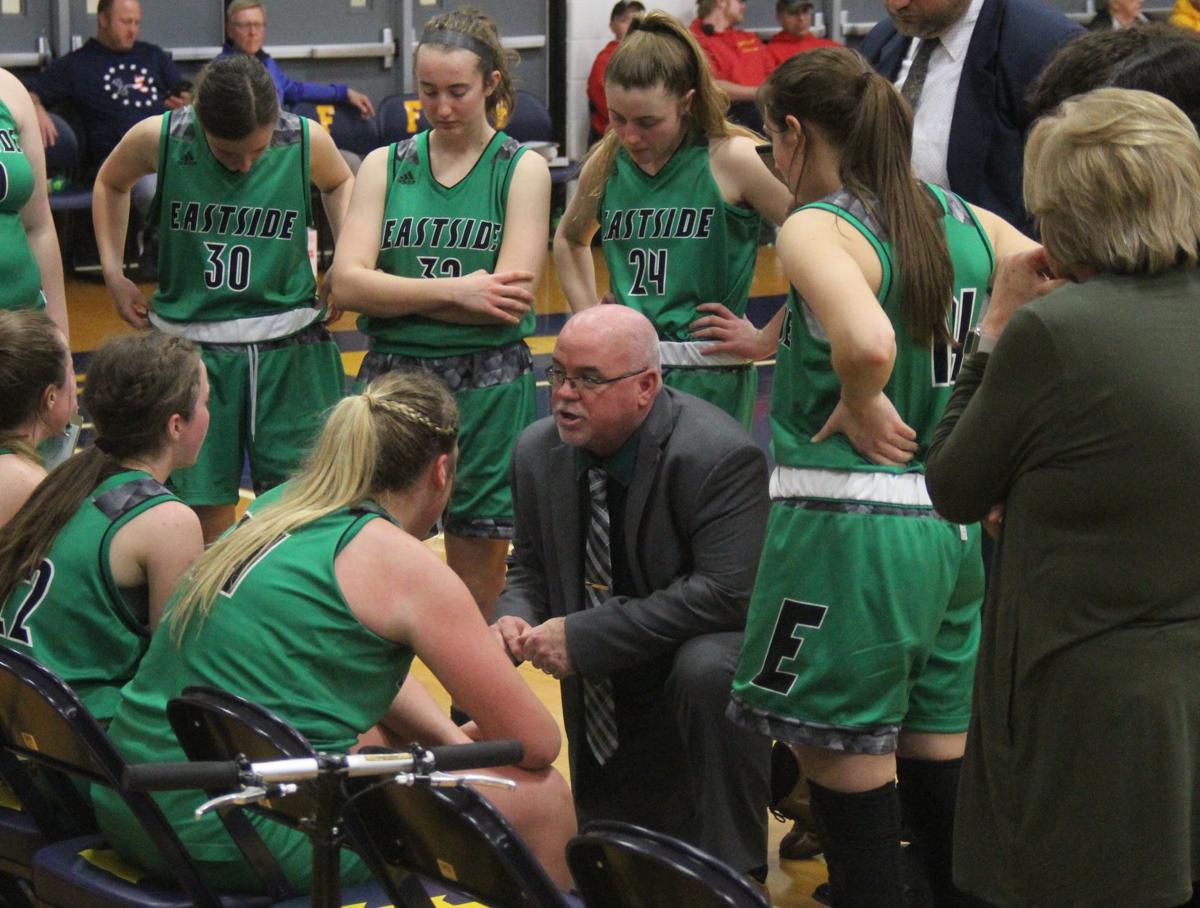 Eastside girls basketball coach Mike Lortie sets up a play during a timeout against Fairfield at Benton Friday, Jan. 10. 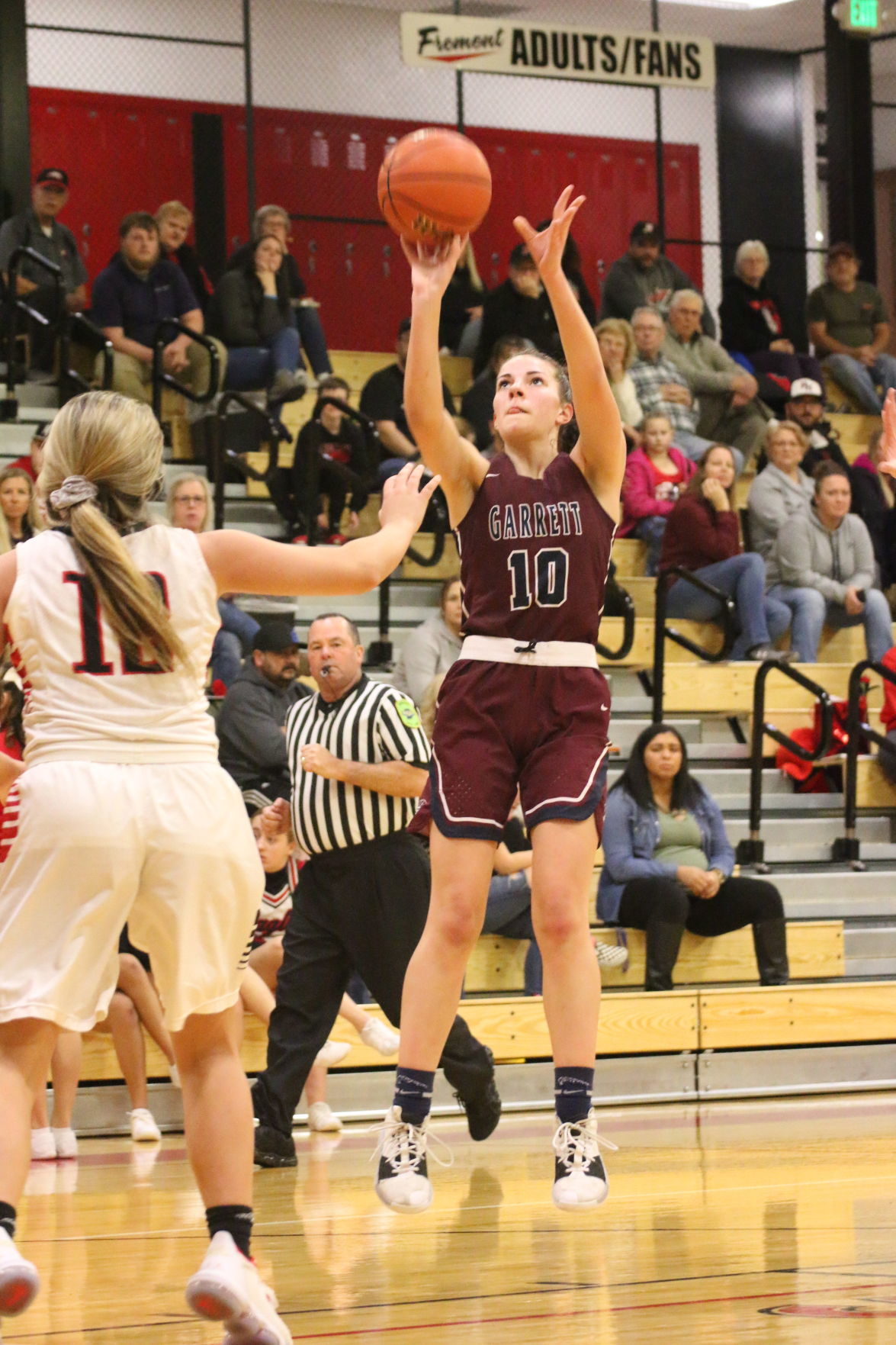 Garrett’s Bailey Kelham takes a shot during a game earlier this season against Fremont. 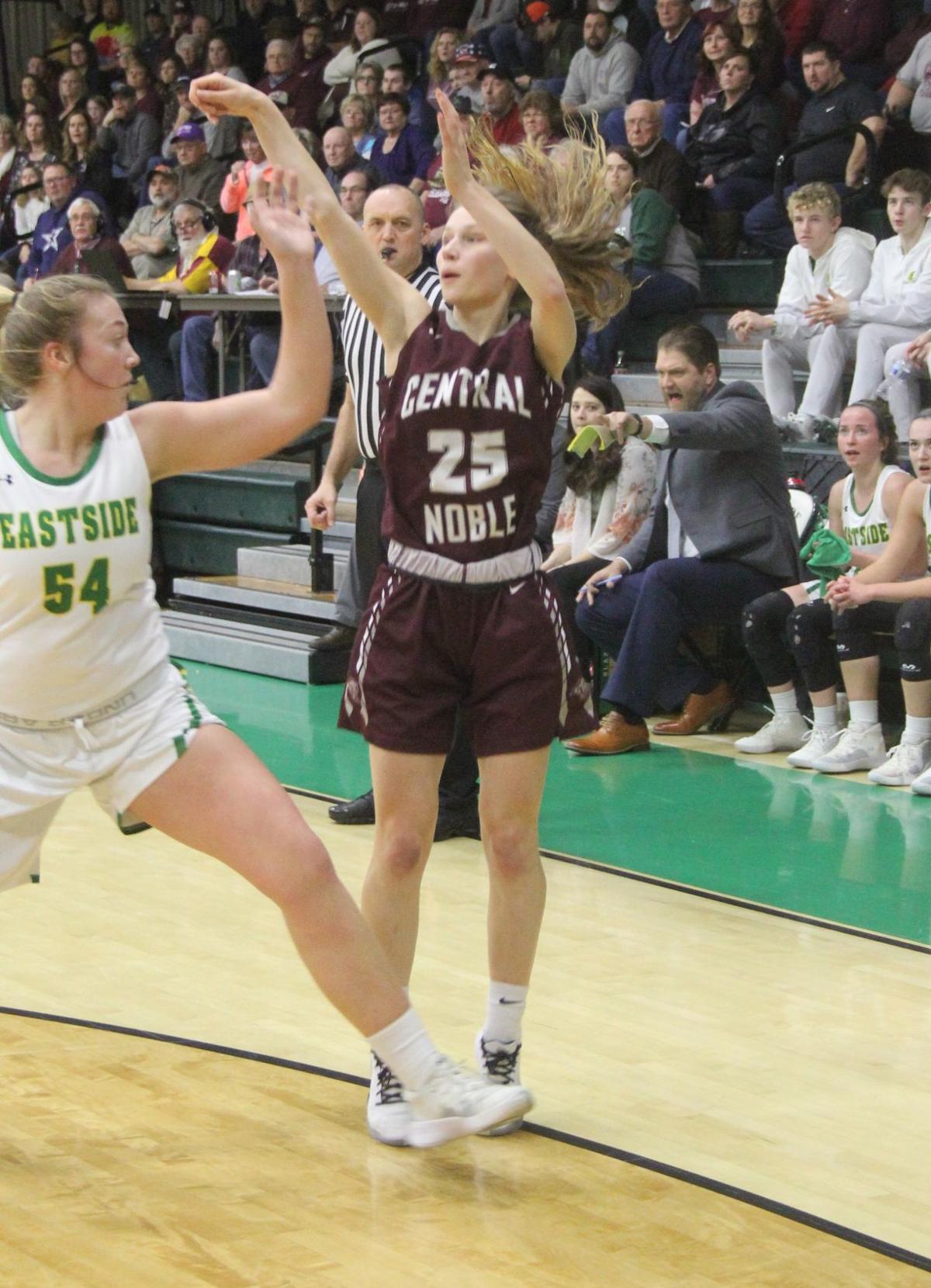 Central Noble’s Bridgette Gray follows through on a jump shot attempt during first-quarter action at Eastside Friday, Jan. 24. Gray scored 12 points in the quarter and finished with 19 in her team’s win.

Eastside girls basketball coach Mike Lortie sets up a play during a timeout against Fairfield at Benton Friday, Jan. 10.

Garrett’s Bailey Kelham takes a shot during a game earlier this season against Fremont.

Central Noble’s Bridgette Gray follows through on a jump shot attempt during first-quarter action at Eastside Friday, Jan. 24. Gray scored 12 points in the quarter and finished with 19 in her team’s win.

Coming into the 2019-20 girls basketball season, Hanna Knoll was regarded as the area’s best player. She lived up to the hype after the season she had for the Hornets.

By living up to the hype, she earned the honor of KPC Media Group’s All-Area Girls Basketball Prep of the Year.

The Angola junior was the leader for a team that finished 21-3 and had a 20-game winning streak going into sectional play. Unfortunately for her and her team, they were beaten in their first game of the Class 3A Concordia Sectional by the host Cadets.

Despite being the number one option opposing teams tried to stop on a nightly basis, Knoll increased her scoring from 13.3 points per game her sophomore season to 16.9 her junior year. She also saw a bump in her rebounds per game from 2.9 to 4.2 and assists per game from 1.8 to 2.3. She did have decrease in steals per game, but it was still a high rate of 3.7 per game.

Knoll shot 49% from the field and 39% from three. She had a career-high of 31 points early in the season against Norwell, one of the better teams in the area. She also became a member of the 1,000-point club with a season to go in her career.

She led the Hornets to a Northeast Corner Conference regular season and tournament titles.

The Eastside girls basketball team won six games during the 2018-19 season. In the 2019-20 season, it took them seven games to reach that mark.

The Blazers surpassed that win total by 10, and the man that led them to that turnaround was Mike Lortie, who was named KPC Media Group’s All-Area Girls Basketball Coach of the Year for the 2019-20 season.

Eastside finished the year 16-7 and was a team that grinded out a lot of those wins. The average margin of victory for the Blazers was 5.1. Their losses were also close, and two of them were by double digits.

The Blazers were a scrappy team that fought in every game. Their season came to a surprising halt after they were beaten by South Adams in the first round of sectional play.

Fenstermaker continued to be a strong contributor for the Hornets in her senior season. She didn’t light up the scoreboard every night but did a lot of the little things that mattered. She scored 7.8 points per game while grabbing 4.2 rebounds, dishing out 2.1 assists and taking 2.3 steals per game. She was an All-NECC selection.

Lorntz was another role player for Angola that finished her career with a strong senior season. Like Fenstermaker, she spread the wealth with her stats. She put up 6.8 points per game, led the team with 3.5 assists per game and was second on the team in steals at 2.7 per game. She was an All-NECC honorable mention.

It’s hard to have a better freshman season than Bailey Kelham had during the 2019-20 season. She averaged 16.1 points, 5.6 rebounds and 2.2 steals per game. She scored a Garrett school record and state freshman record for points a single game when she scored 45 points against New Haven.

She also set school records for free throws made and attempted in a season (129-170) and field goals in a game (17). Kelham made the All-NECC team and was an IBCA Underclass All-State honorable mention.

Ostrowski became one of the area’s best defenders this season and did it by guarding multiple positions in the biggest games of Garrett’s season. She scored 8.1 points, 8.2 rebounds, one steal and 1.4 blocks per game. She was a team captain for the Railroaders, made the All-NECC team and was an IBCA Underclass All-State honorable mention.

Armstrong was the one who made the Railroaders go this season. In the postseason, she had 7.3 assists per game. As a team captain, she scored eight points, 5.8 assists, 2.4 rebounds and 1.3 steals per game. Armstrong led the conference in assists and was fifth in the state. She was an All-NECC member.

Owens numbers may have dipped from her stellar freshman season, but she was still a capable, dangerous threat for the Railroaders. She averaged seven points, 3.7 rebounds, 1.6 assists and 2.1 steals per game.

Gray became the go-to scorer for the Cougars this season, and she handled it like a pro. She was an All-NECC selection after she led the team with 13.5 points per game. She also added three rebounds, 1.6 rebounds and two steals per game.

Andrews was every where on the court for Central Noble this season. She played any position that was needed for the team’s success. Andrews averaged 8.3 points, 4.1 rebounds, a team-high 2.1 assists and 1.5 steals per game.

As a junior, Hartsough continued thrive as the Lakers’ go-to scorer. She also did everything else for a Lakeland team that struggled early before finishing the season strong. Hartsough led the team in rebounds (7.6), assists (2.3), steals (3) and blocks (1.9). She was an all-conference selection and was an IBCA Underclass All-State honorable mention.

Stroop capped off her high school career by becoming a threat from three-point range. She led the team with 55 three-pointers made while shooting 35%. Stroop averaged 9.5 points, three rebounds and 1.4 assists per game. She was an All-NECC honorable mention.

Jolloff continued grow as a basketball player and led the Panthers in every statistical category this season. As an IBCA Underclass All-State honorable mention, she scored 17 points, 8.8 rebounds, 4.6 assists, 3.2 steals and 1.7 blocks per game. Jolloff shot 38% from the field and set a new school record for points scored in a single season with 375.

Gerke was another player that continued to make a larger impact for her team from one season to another. She was behind her teammate Jolloff in scoring (13.1 points per game), assists (1.3) and blocks (1.6). Gerke also averaged 4.4 rebounds and 1.2 steals per game.

Kessler was one of the key reasons why the Blazers were able to have a turnaround season. She led the team with 11.6 points per game while shooting 41% from the field. She averaged 3.7 rebounds, 2.7 assists and 1.7 steals per game and was an All-NECC member.

King was another contributor to Eastside’s success this season. She was an All-NECC honorable mention. She led the Blazers shooting 47% from the field, averaging 7.7 points and six rebounds per game.

Mast was one of the most ferocious defenders in the area. She led the NECC and area in steals with 4.7 per game and 108 total. She also averaged 13.8 points, 5.4 rebounds and 2.4 assists per game. She was an All-NECC and all-area selection for the second year in a row.

The Knights were led defensively by Kirkpatrick. She was always put on the opposing team’s best player no matter the position. She averaged 6.6 points, four rebounds, 3.1 assists and 2.3 steals per game. She was an All-Northeast 8 Conference first team selection.

Rhonehouse emerged as the Eagles best player this season. She was an All-NECC selection after she led Fremont in scoring with 10.2 points per game. She also averaged 3.8 rebounds, 1.7 assists and 1.5 steals per game.

German continued to be one of the area’s most consistent players during her senior season. She reached the 1,000-point career mark, and she led the Panthers with 12 points and 3.2 assists per game. As an All-NECC selection, she also had 2.5 rebounds and 1.5 steals per game.

In a down year for the Warriors, Miller was a shining light. She did everything for Westview. She led the team with 16 points and 10 rebounds per game while shooting 51% from the field. She earned All-NECC recognition for her contributions this season.