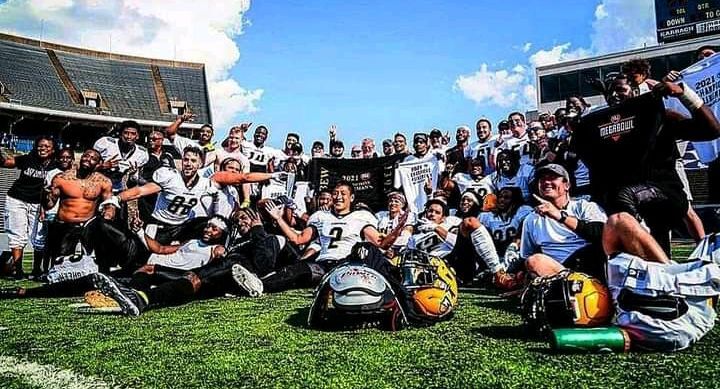 The Linemen pose for a team picture after defeating The Jousters 26-23 in The Spring League’s championship game, the Mega Bowl, on June 19 at Rice Stadium in Houston. Dale Carlson, the first head football coach at Tri-State/Trine University, was the wide receivers coach for The Linemen. 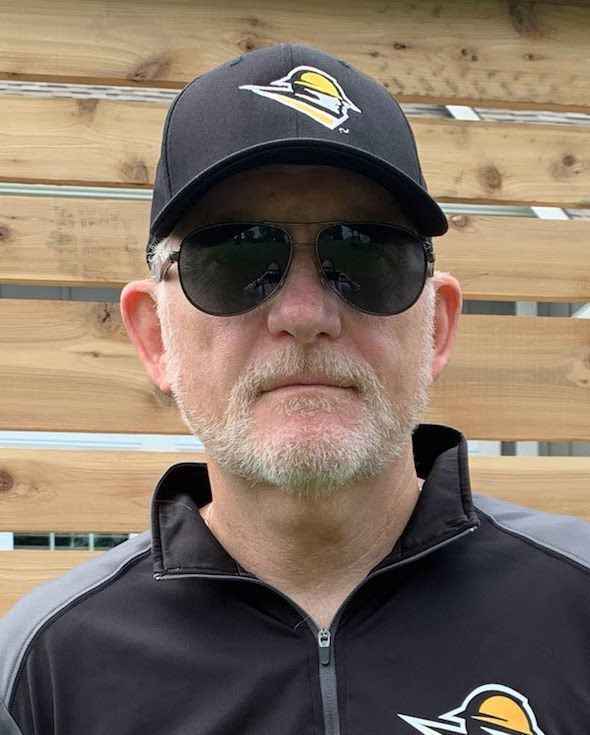 HOUSTON — Dale Carlson devoted his entire coaching career to prepare players for the next stage of their lives.

Now, the former Tri-State University football coach is doing just that for the next stage of their football lives as an assistant coach in The Spring League.

It’s an eight-team league of players wanting to catch the eye of scouts to play for the elite leagues of professional football like the National Football League and the Canadian Football League revolving around hubs in Indianapolis and Houston in May and June.

Carlson was the wide receivers coach for The Linemen, one of four teams who played games in the North Division at Lucas Oil Stadium in Indianapolis.

Carlson was hired by Hal Mumme to coach the wide receivers for the Linemen — the eventual league champion.

Carlson traded messages with the president of the league, Brian Wells, and passed his name on to coaches. One of them was Mumme, who Carlson knew well from shared NAIA ties and similar offensive philosophies.

In that span, Carlson launched the Thunder program at what was TSU in 1995 and within four years was in the NAIA Final Four. The name of that Angola university was changed to Trine University in 2008.

Carlson and Mumme coached against each other in the NAIA ranks in the late 1980s.

In The Spring League, Carlson was also coaching against the likes of Jerry Glanville, a longtime NFL, CFL and college coach, and numerous others who were assistants in the pro ranks.

“I can coach with these guys. I knew I could,” Carlson said. “It was fun to be able to show that.”

“We recruited some good players to play, and when we had to make changes — injuries — the experience of building and rebuilding the program was helpful in retooling The Lineman.”

After an 0-1 start, Mumme and Carlson set out to rebuild the team, essentially from the ground up. Turning over stones and following hunches to find the right talent for Mumme’s vaunted “Air Raid” system.

The Linemen went on to win their final six games of the season after the season-opening 27-20 loss to the Conquerors on May 6. That included defeating the Jousters 26-23 in the league’s championship game, the Mega Bowl, on June 19 at Rice Stadium in Houston.

In many ways, it was a system Carlson modeled in more than 30 years with head coaching stops at Lakeland (Wis.), Taylor, Tri-State, Ohio Dominican, Valparaiso and Lindenwood-Bellevue, Illinois.

“All the offensive coaches were Air Raid coaches. There wasn’t a lot of time we needed to put the offense in place,” Carlson said.

The mission of TSL is simple, help players fighting to make an impression and eke out a living in professional football.

These are players who didn’t stand out to scouts in college. Some weren’t tall enough, fast enough or big enough.

Sometimes it wasn’t even that defined.

It comes down to numbers, someone has to be trimmed from a roster.

“There are very few jobs available — what, 58 or 59 per NFL team? There aren’t that many opportunities,” Carlson noted.

That receiver, Isaac Zico, led TSL with touchdown receptions. Another, Michael Dereus, led the league in total yards receiving with 435.

Carlson also coached receiver Reece Horn on The Linemen. He signed with the Cincinnati Bengals on Tuesday evening after catching 28 passes for 313 yards and three touchdowns earlier this summer.

“Not every player was a major college player. We also had players who played in the Big Ten,” Carlson said. “It was about judging talent and if they fit into what we were trying to do. That’s always part of building times.”

He pointed to other guys who had NFL or CFL experiences or even were with teams in the Alliance of American Football or the XFL.

“Where does the hair get cut, what’s between the 52 and the practice squad in the NFL?” Carlson said.

“I had some ideas in getting a group of guys together quickly from my experiences at Tri-State and Ohio Dominican. We went out with limited practice and had to play some of the best teams in the country. That’s kinda like here. Everyone else had a head start.

“Definitely made for a challenge. But, it’s something I’ve been through and Hal knows that from restarting (football) at Southeastern Louisiana.”

The biggest difference between NAIA and The Spring League is the talent, Carlson reasons. The X’s and O’s are essentially universal.

“I approached them just like I coached anyone else,” he said.

Even so, he wasn’t surprised by the talent in the league.

“There were some very good players, it was just a way of getting them to do the things we wanted them to do,” Carlson said. “I knew there were going to be talented players.

Some teams had been working for months and had developed a system. It came together quicker for The Linemen.

“We were able to take a group of guys together for the first time and ran the table,” Carlson said. “We got better and better and more comfortable in what we asked them to do.”

After being away from the college game for a few seasons, Carlson says the coaching bug never really goes away. But, does that mean there is another stop in his career? Will he return to the sidelines again?

Like his high-powered offenses, there’s a calculated risk. The risk and reward is a balancing act.

There’s still a lot of uncertainty about how The Spring League will evolve with the reemergence of the USFL. Both leagues are under Wells’ influence.

“I don’t know,” Carlson said. “I don’t know anything more than what came out in the announcement. We’ll have to see. Opportunities like this could be really good. You evaluate as you go forward.

“You never say never. We’ll have to see if anything comes around. Whether that’s helping high school and college programs. I’m going to see what comes around.”

One thing is certain, Carlson declares.