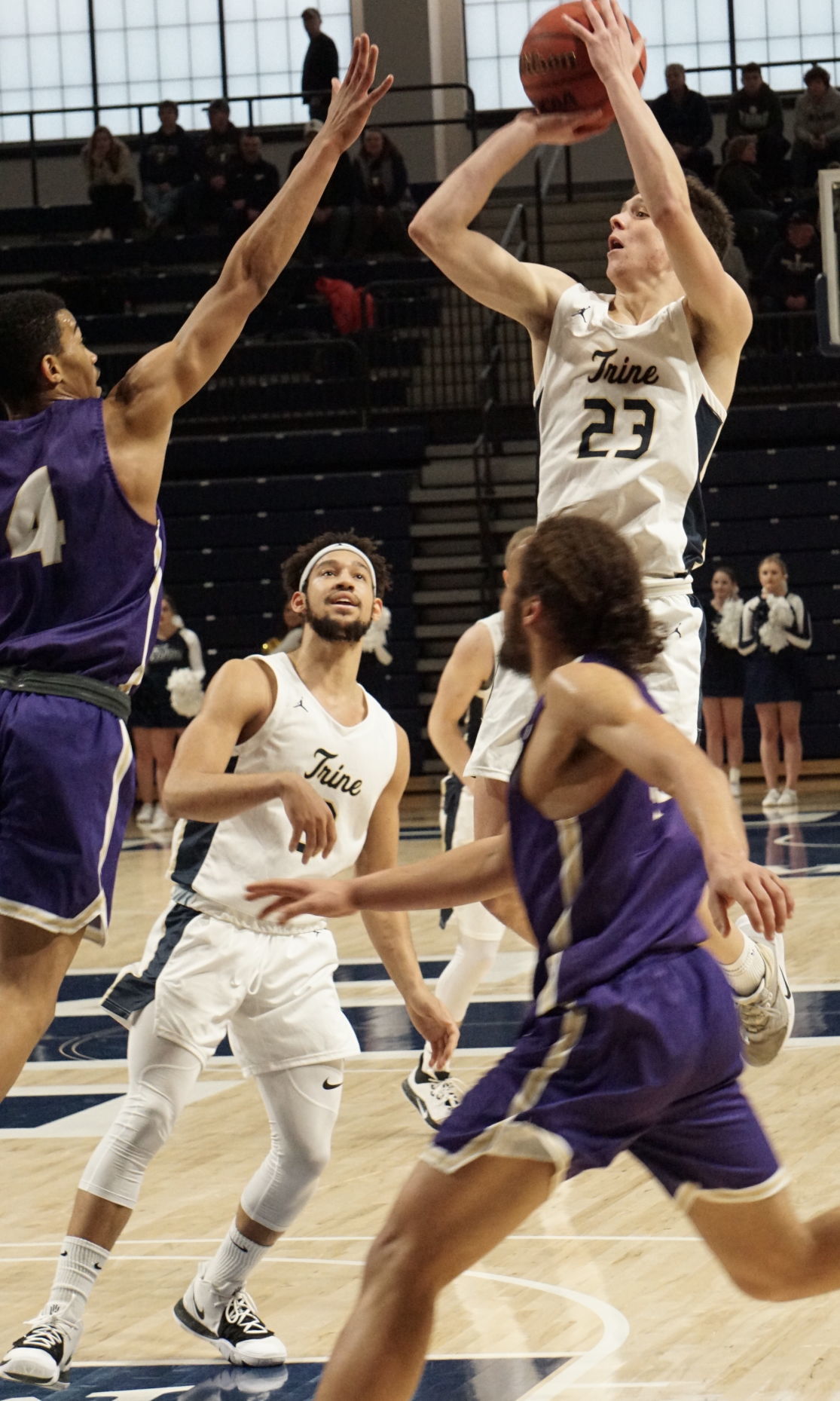 Trine sophomore Aiden Warzecha (23) takes a jump shot as it is being contested by an Albion player in the first half Saturday afternoon at the MTI Center in Angola. Thunder senior Langston Johnson looks on. 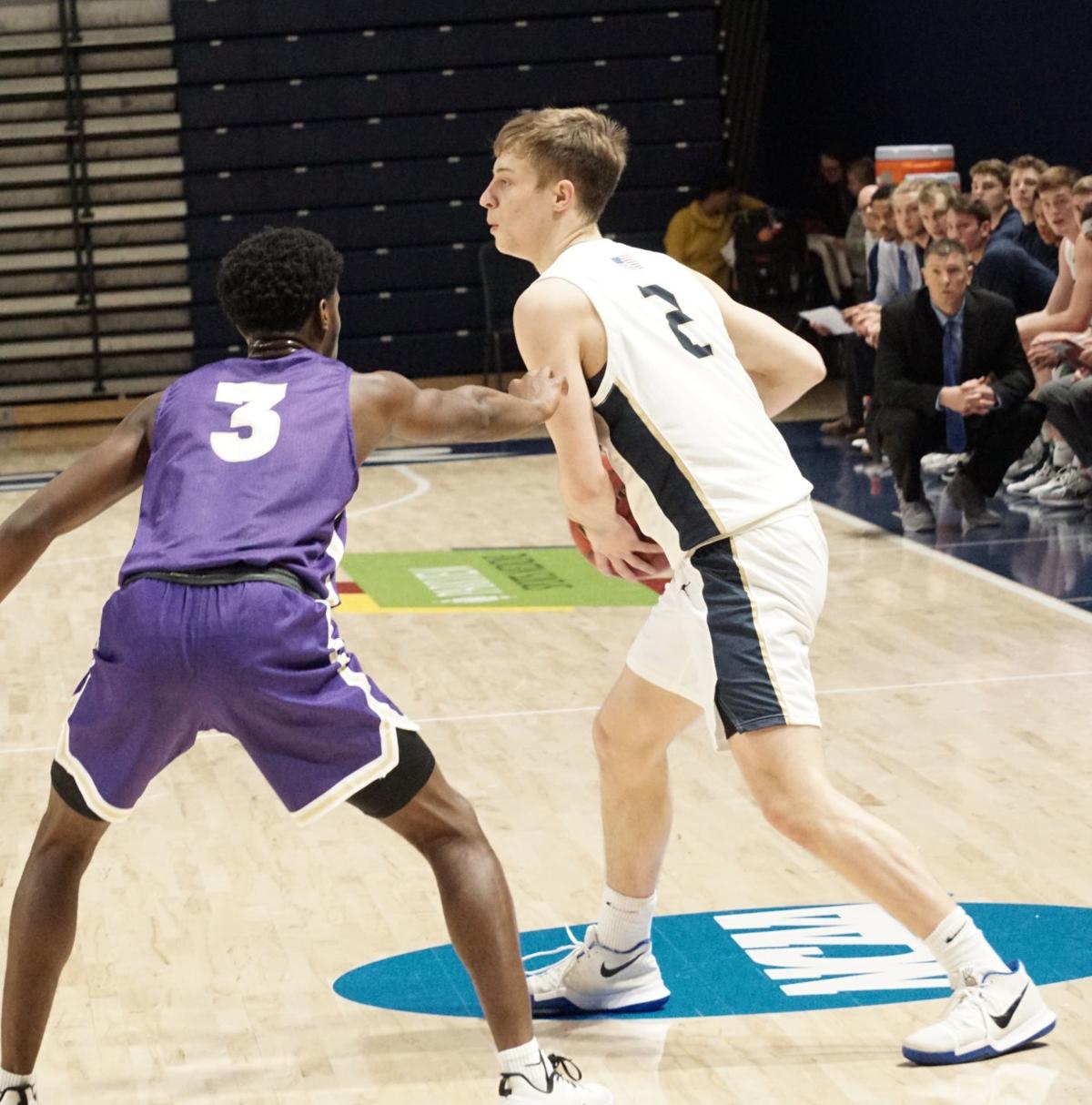 Trine sophomore guard Bryce Williams looks for a teammate to pass to while being defended by Albion sophomore Cortez Garland during the first half Saturday afternoon at the MTI Center in Angola. Williams had a collegiate career-high 18 points, but the Thunder lost to the Britons 88-82.

Trine sophomore Aiden Warzecha (23) takes a jump shot as it is being contested by an Albion player in the first half Saturday afternoon at the MTI Center in Angola. Thunder senior Langston Johnson looks on.

Trine sophomore guard Bryce Williams looks for a teammate to pass to while being defended by Albion sophomore Cortez Garland during the first half Saturday afternoon at the MTI Center in Angola. Williams had a collegiate career-high 18 points, but the Thunder lost to the Britons 88-82.

ANGOLA — Albion’s men’s basketball team kept chasing after Trine in the battle for first place in the Michigan Intercollegiate Athletic Association Saturday afternoon at the MTI Center. And the Thunder could not keep pace with the Britons down the final stretch in an 88-82 loss.

Junior guard Jamezell Davis Jr. scored 23 of his game-high 32 points in the second half for the Britons (15-2, 6-0 MIAA) while sophomore backcourt mate Cortez Garland had 18 of his 27 points after halftime. They also combined to shoot all of Albion’s free throws and were 20-of-21. Garland made all 13 of his charity tosses.

“Trine did as good a job as anyone in taking our big post players away,” Britons coach Jody May said. “We needed every one of Jamezell and Cortez’s points.

“We can talk a lot about defense. But offense won us this game and we grinded it out as a whole. We’re ecstatic to win on the road.”

Albion’s top post players Caden Ebeling and Quinton Armstrong were on the bench for the final 4 minutes, 10 seconds of the first half. Armstrong left the game with 7:25 to go before halftime after picking up his second foul. Ebeling went to the bench after getting called for his second foul at the 4:10 mark.

Davis came alive and Trine withstood it by making shots.

Thunder reserve guard Bryce Williams out-dueled Davis for a couple of minutes early in the second half after the Britons tied the game at 45. Williams hit two three-pointers and made three free throws while Davis made two triples. Trine led 56-51 after Williams’ three with 13:56 left.

Trine tried to stave off the Britons, but was unable to. Albion went on a 12-0 run for a little over three minutes late in the game. Garland made a breakaway layup off his own steal with 2:41 to play to put the Britons up 80-79.

Trine had three of its nine turnovers in the final 2:45. Albion clinched the victory by making all six of its free throws, including the first four by Garland, in the final 26.4 seconds.

“Turnovers and lack of execution late were the difference,” Thunder coach Brooks Miller said. “If you told me beforehand that we’d make 14 threes and they’d only make six, I thought we would be in pretty good shape.

“To me, it’s just round one. We’ll do this dance again. But now our focus has to be against Hope. We have to get a little bit better at guarding penetration.”

Maurice Hunter had 14 points and 11 rebounds. Freshman forward Brent Cox of Kendallville made his first collegiate start to match Albion’s Ebeling and Armstrong up front and had 10 points and seven rebounds.

Daniels and Langston Johnson had 12 points each for Trine. Winters had eight points (all coming in the second half) and six assists. Johnson, the Thunder’s leading scorer, only had two points in the second half. Johnson and Winters were a combined 8-of-28 from the field.

Albion outscored Trine in the paint 40-22. Ebeling and Armstrong combined for 22 points and 13 rebounds.

The Thunder will take on the Flying Dutchmen at DeVos Fieldhouse in Holland, Michigan, Wednesday night.

In Kalamazoo, Michigan, the Thunder led 17-3 after one quarter and rolled to the MIAA victory.