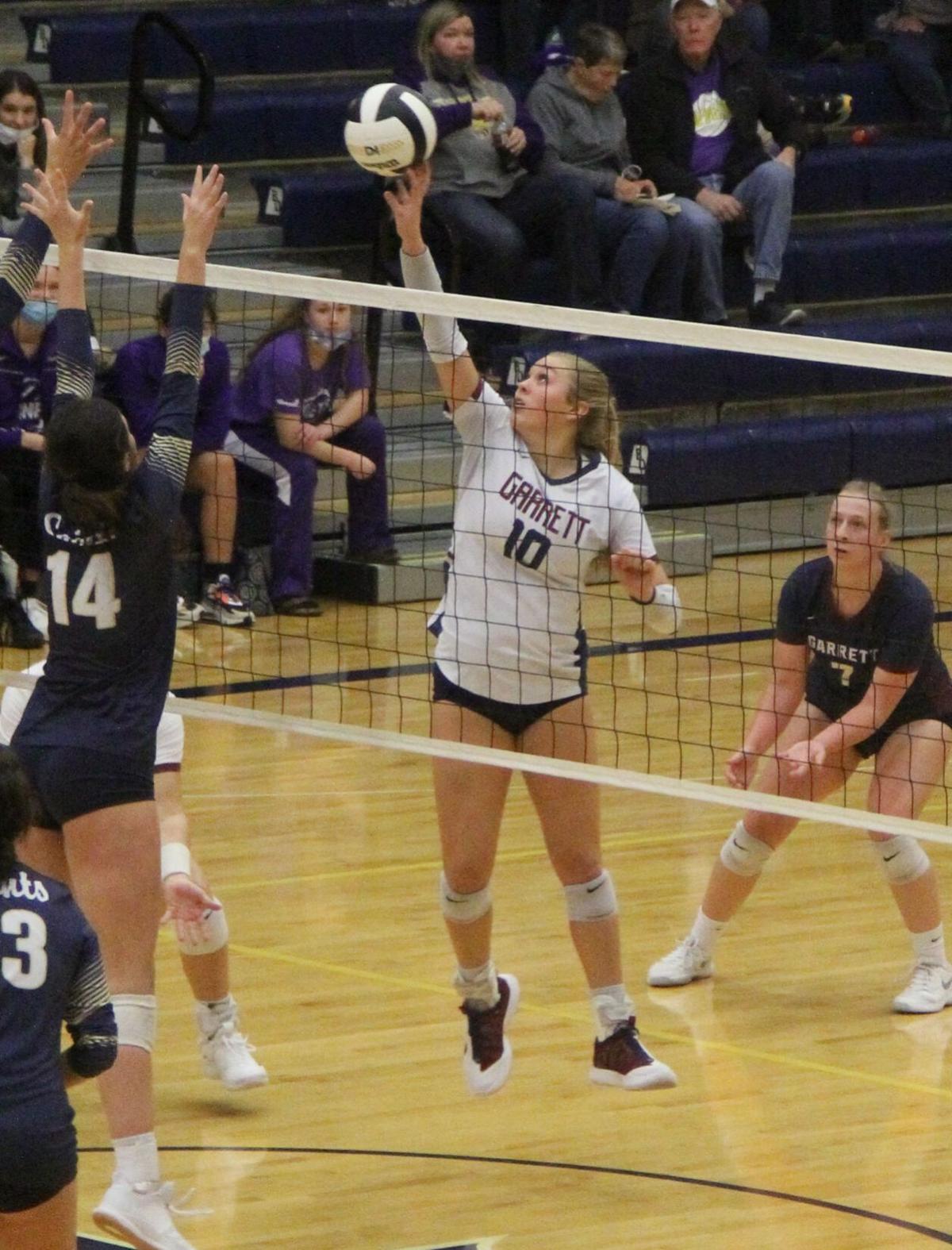 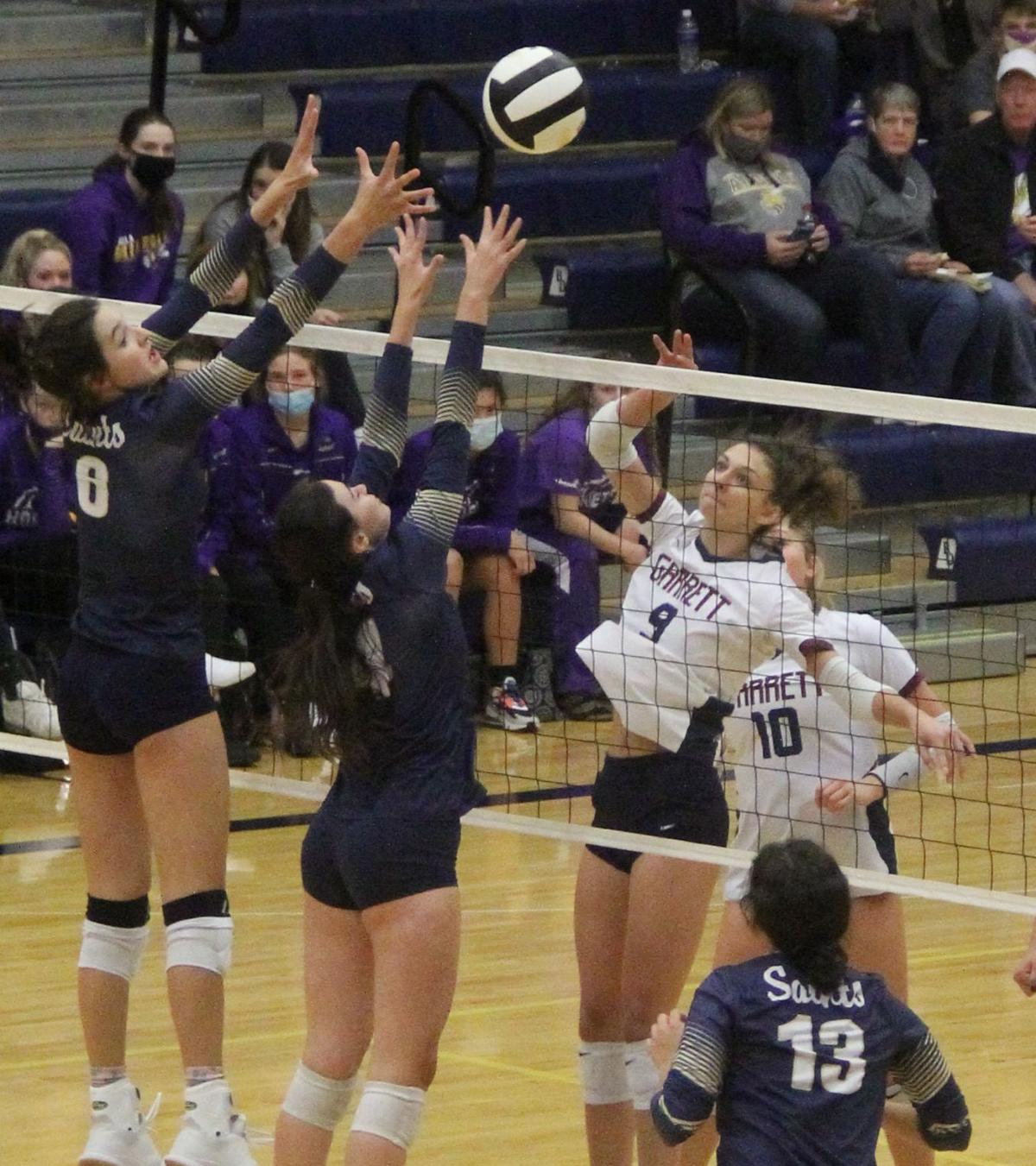 FORT WAYNE — Volleyball season ended for Garrett and continued for Angola in Saturday’s semifinal round at the Class 3A Bishop Dwenger Sectional Saturday morning.

The Railroaders have nothing to hang their heads about, posting back-to-back 29-win seasons, best of any Garrett sports team.

“We’re proud of that,” Gard said. “We had a lot of career milestones this year. Emma Hirchak got 1,000 assists and 1,000 kills. Logan Smith got 1,000 digs to add to the 1,000 she had last year. She set three school records for career numbers digs, assists and kills.

“We’ve just had some tremendous moments this season,” the Garrett coach said. “I reminded the girls that all but one team in each class ends their season with a loss. We need to keep in mind all of the hard work and all of the highs we had this season, and really be proud of what we accomplished this season.”

On Oct 1, Gard recorded her 100th win as Garrett coach.

Entering morning play, the Saints had lost just eight sets all season. Their losses have been to IHSVA overall No. 4 New Castle in five sets on Sept. 19 and in two sets to IHSVA overall No. 6 LaPorte Sept. 26. The Saints own victories this season over Class 3A No. 1 Bellmont (No. 17 overall) and to McCutcheon (4A, No. 16 overall).

Hudson picked up four kills as Dwenger raced to an 18-9 lead. Reecer served an ace before the Saints closed out the first set.

Garrett hit two spikes out of play, Dwenger’s Lexi Zimmerman put down four kills, senior Olivia Clark had a block and Bobay added a block for a 14-5 lead in the second set.

The Railroaders showed some spunk, however, as Smith got two kills. Hirchak served an ace and got two kills of her own, but a Garrett serve into the net ended the second set at 25-15.

Bobay put down two kills. Hudson served an ace and delivered a blistering kill from the back row for an 11-4 lead in the third set.

Lyons and Zimmerman had aces as the lead reached 19-7. Garrett got a kill from Kinleigh Smith and a block from Ostrowski, but Bishop Dwenger wasn’t about to let up. Bobay spiked two more points and Tellez ended the match with an ace.

In the first match, Angola fought off stiff challenges from Concordia (19-9) before cruising to a third-set victory.

The first set was tied nine times — the last at 15-all — before Angola appeared to take hold on Kady Conrad’s block. Later, Makailah Thompson served an ace and Lindsey Call added a tip for a 20-15 lead.

The Hornets were called for a double hit, and Concordia’s Nicole Pape put down a spike to close the gap to 24-23. Harris ended the set, however, slamming a spike off a block.

Set two started in a similar fashion, with five ties before Gaerte served two aces for a 12-10 lead. The Cadets got two kills from Aniya Martin and one from Taylor Hepburn to tie the match at 22.

Olivia Thomas put the Hornets in front with a kill and a 26-25 lead. After Concordia dug up one of her spikes in the middle, Gaerte sent one down the line for the winning point and a 2-0 lead.

After two even matches, Angola showed it had more left in the tank.

Kills by two kills by Gaerte and Call, one each from Conrad and Rachel Cockroft, and a block by Call staked Angola to a 13-8 lead. Harris later added a block to extend the margin to 16-9.

Hepburn tried to keep Concordia in it with a kill, but Gaerte scored a kill from the back row and Harris served an ace. Gaerte ended the match with four kills and an ace.

In Benton, the host Falcons defeated Prairie Heights in a sectional final for the second straight year. Fairfield won on Saturday night 25-11, 25-11, 25-20.

The Panthers (24-10) overcame a test in their semifinal contest by Churubusco to win three sets to one.

In the Class 4A sectional semifinal at Snider, the host Panthers had to work for the first set then won the next two sets with less resistance from the Barons.

DeKalb finished with a 6-16 record.

In the Class 3A Sectional at Tippecanoe Valley, the Warriors upset the Lakers in a competitive, four-set battle.

Lakeland, the Northeast Corner Conference regular season champion, ended up 22-8. That is an eight-win improvement from 2019.