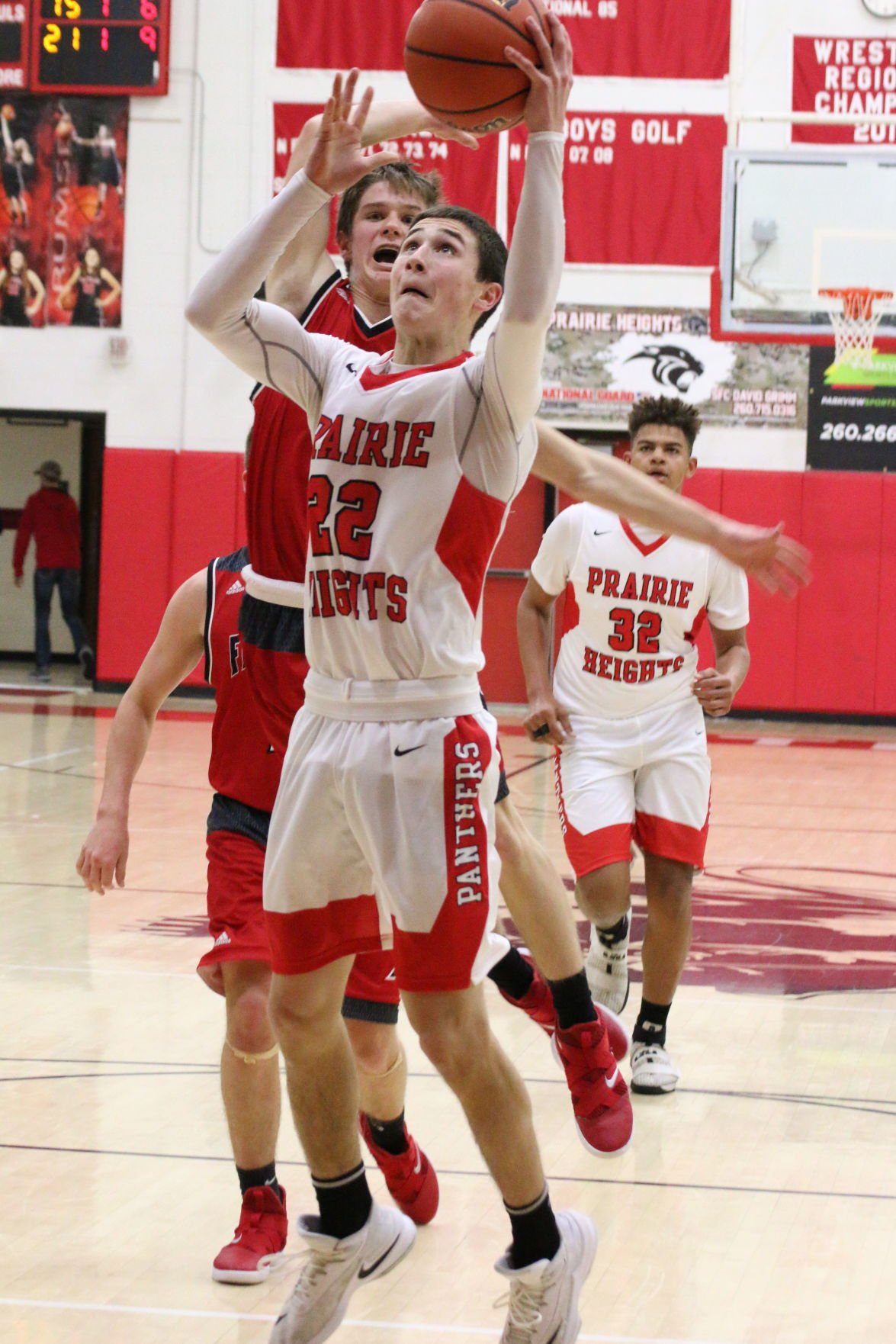 Prairie Heights’ Mike Perkins races against Fremont defenders to the basket for a layup during an NECC Tournament game on Wednesday, Jan. 9, 2019. 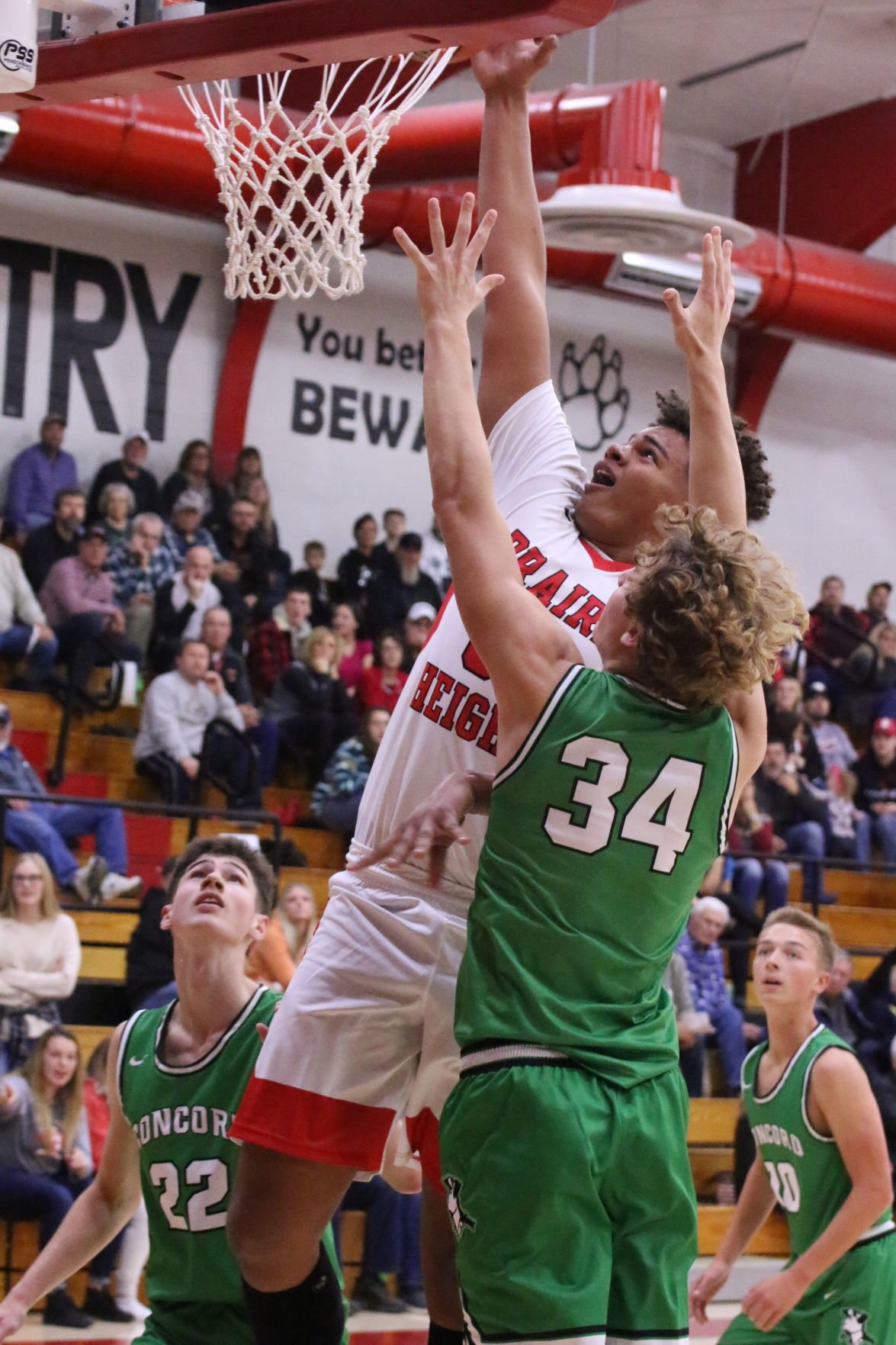 Prairie Heights’ Mike Perkins races against Fremont defenders to the basket for a layup during an NECC Tournament game on Wednesday, Jan. 9, 2019.

BRUSHY PRAIRIE — There is a barn on the Perkins family property.

Inside the structure hangs a hoop, worn from years of use, in true Hoosier fashion. It’s an unofficial mascot of rural Indiana – many just like it litter the farm lands in this area of the state. And, like it had been written into a Hollywood script, that hoop, inside this barn, helped lay the foundation for one of Indiana’s most intriguing teams.

“I grew up just shooting in my barn, dreaming of accomplishing great things,” said Prairie Heights senior guard Mike Perkins. “I’d visualize all these goals, and tell myself I was going to accomplish them, because there’s no greater feeling than when you are able to do that.”

Perkins oozes confidence. You can see it in his play. Whether he is initiating offense, creating looks for teammates or shooting the ball himself – which he does with tremendous efficiency – he does it all with authority and purpose.

Perkins’ play has sparked a revival of the Panthers’ boys basketball program. He led the Panthers in points (16.3) and assists (2.2) per game during a 20-6 season in 2018-19 – a year in which they were the most improved team in the state, in terms of record – and scored 22 in the team’s season-opening win against Concord Wednesday night, becoming just the fourth player in program history to reach 1,000 career points.

You also hear it when he talks. The point guard is never shy when speaking about his expectations for his team. Why should he be? Those 20 wins were the most ever by a Prairie Heights team, and the Panthers’ records have increased every year that Perkins has played – from 2-21 as a freshman to 8-15 as a sophomore then 20-6 last season.

“And, I don’t think going undefeated this season is off the table,” Perkins proclaimed.

“I’m still kind of upset because I don’t think we have gotten the respect we deserve, even after going 20-6 and reaching the sectional finals,” Perkins continued. “I think we are about to put the whole conference on notice and people are going to realize how good we are.”

While an undefeated season may be unlikely, if for no other reason than the difficulty of playing a Northeast Corner Conference schedule and the grind of a lengthy season, there are definite reasons to believe last year’s record – an extreme outlier compared to other recent seasons – was no fluke and that these Panthers could end the regular season atop the NECC standings and accomplish even more in the playoffs.

Those reasons begin with Perkins and his fellow classmates. The senior trio of Perkins, Elijah Malone, a 6-foot-9 center, and Brandon Christlieb, a 6-4 guard, might be the most talented bunch to ever play on the court together in Brushy Prairie. And they play off of each other’s strengths perfectly.

Malone is a monster in the paint – larger than any other player he will face in the regular season – who forces offenses to play outside-in, while Christlieb is a good old-fashioned bucket-getter who’s length makes him an effective perimeter defender to boot – it is worth remembering that Christlieb was not on the floor for the Panthers’ blowout win Wednesday.

Then there’s the conference they play in. Reigning champ Westview returns senior guard Charlie Yoder, a potential Mr. Basketball candidate, while teams such as Angola and Central Noble will again be near the top of the standings. Heights beat two of those three last year, though and both the Hornets and Cougars face questions due to inexperience and injuries.

“It was really just the one team that we could not figure out a way to beat,” said Panthers coach Tony Everidge, of Westview, which accounted for three of Heights’ six losses last year. “And maybe that falls on me.

“Everyone thinks Westview’s gonna be down, they won’t be down just because of their program.”

Heights’ most lopsided loss to the Warriors was a 63-46 defeat in the sectional championship game, but they fell by only four points, 55-51, on Westview’s home court earlier that year. The Warriors graduated three key starters from that team, though, while Heights returns almost everyone.

Everidge admits he deals with an unique dynamic inside his locker room, managing players’ expectations with a realistic approach to the season. He’ll lean on players such as Perkins, who has taken on a vocal leadership role, to manage what continues to be a rising tide of hope.

And its Perkins who, amongst all the other factors this season, both coaches and players alike say will make or break this season – spoiler alert, not one person thinks it will be break.

“His basketball IQ is just tremendously high,” Malone said. “There’s not another point guard in the state I would take over him.”

Added Everidge: “Somehow, he is still underrated, but that will change. He’s gotten to the point where if he spots up for a three, I feel like its a 75% chance he’s making it. That’s how good he is and that’s how much work he has put in to get to this point.”

Perkins has come a long way from the boy shooting hoops in his barn to now leading a title-contending team with hopes of much more than just a league crown. But this is what he’s worked for. All those goals he set for himself are now attainable. He wants to make sure everyone else is on board for the ride.

“The whole team needs to be all-in,” Perkins said. “But that’s (the senior class’s) message. We expect to win conference, we expect to win sectional. We are shooting for the stars, and if we miss we’re going to land on the moon.”