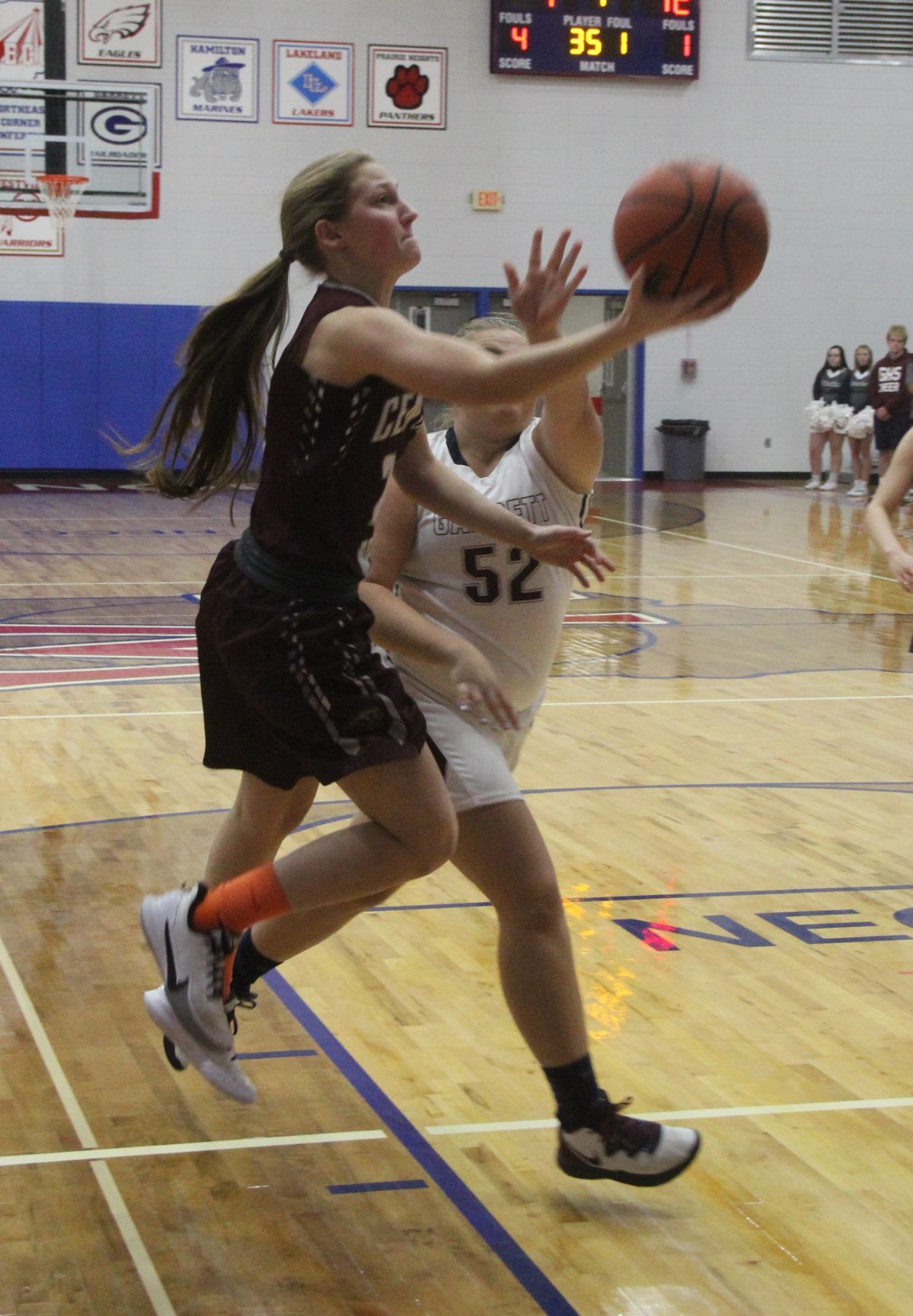 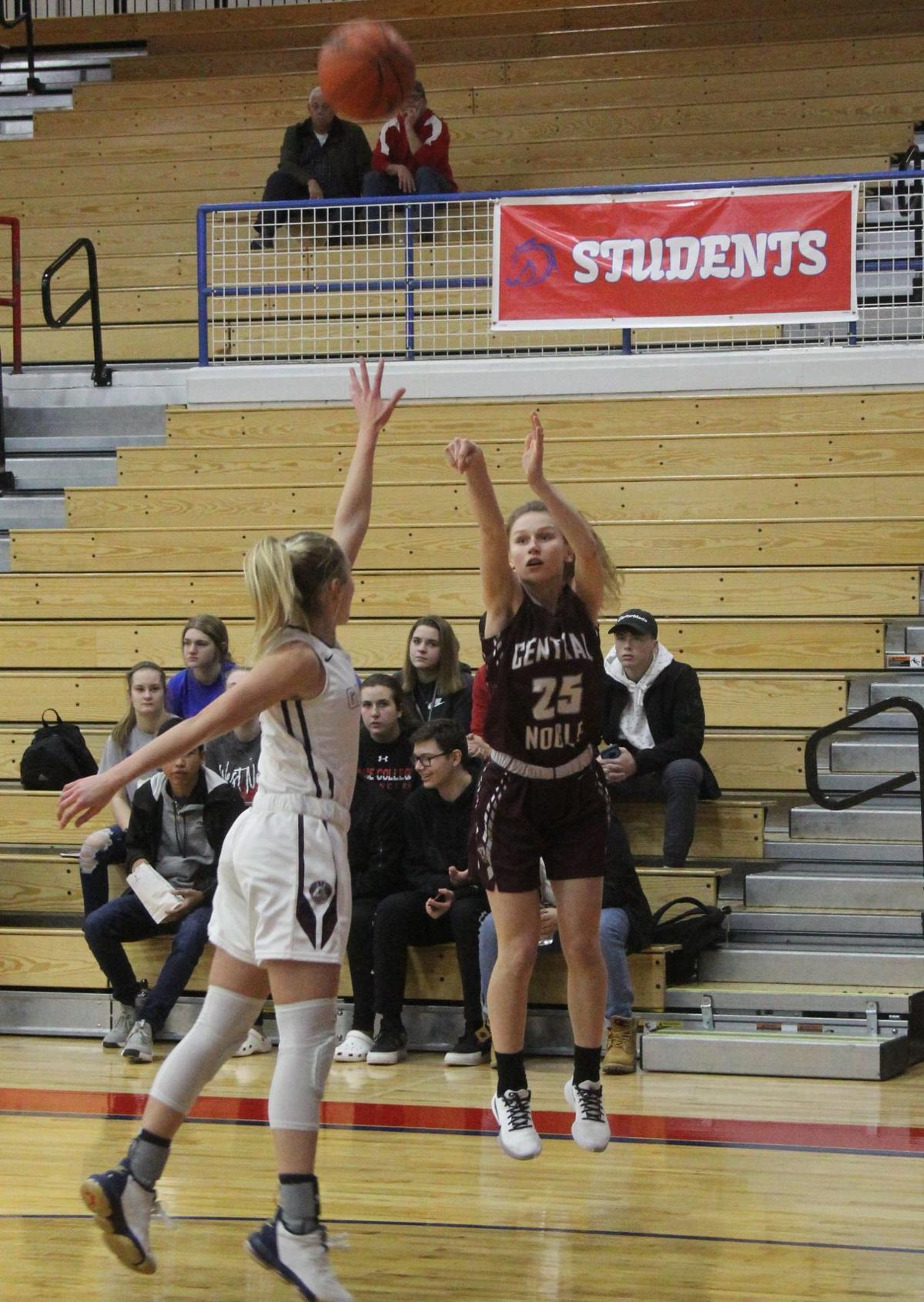 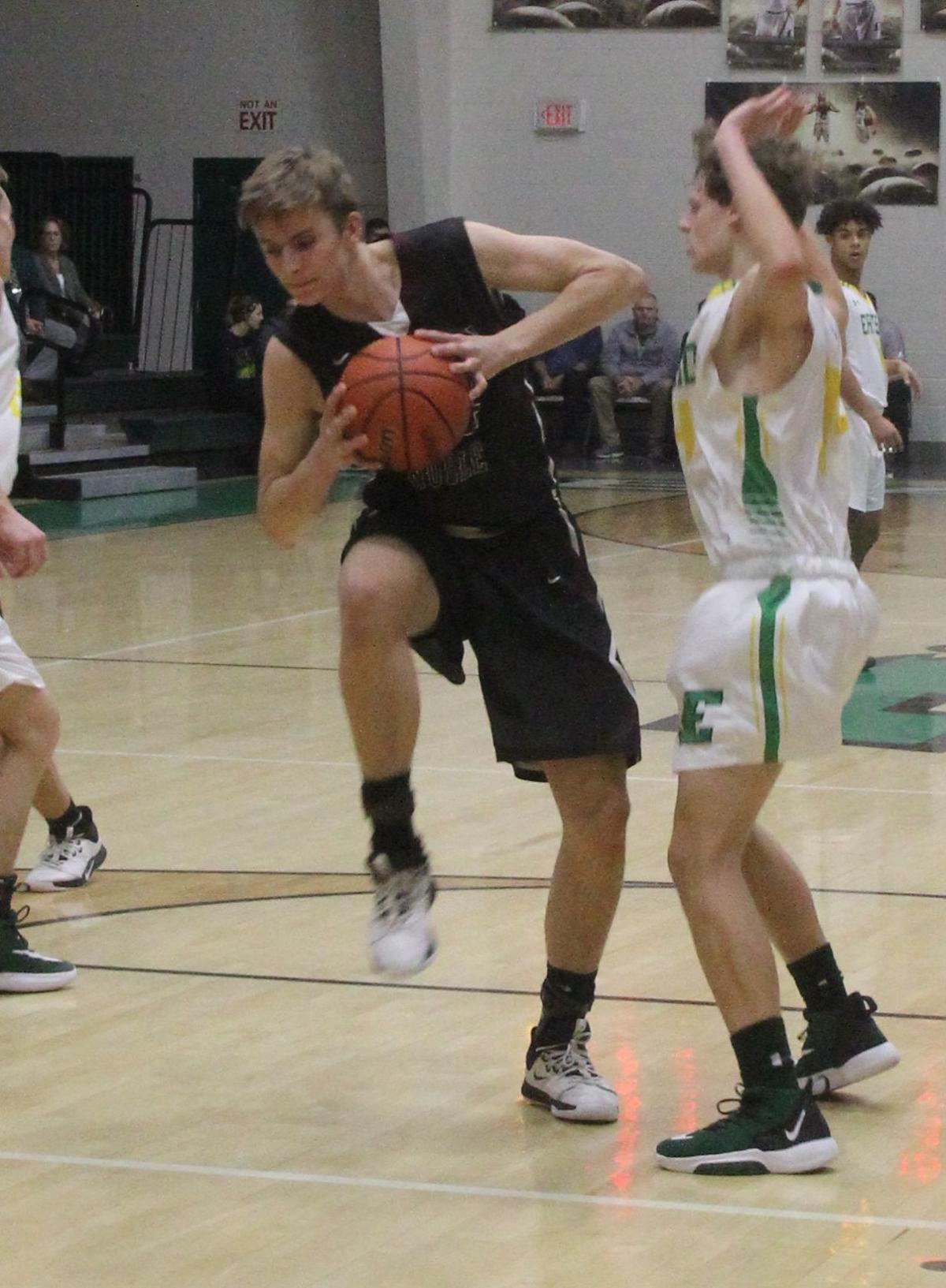 Central Noble's Logan Gard pulls down a rebound during his team's 57-47 win over Eastside in NECC tournament play Jan. 14. 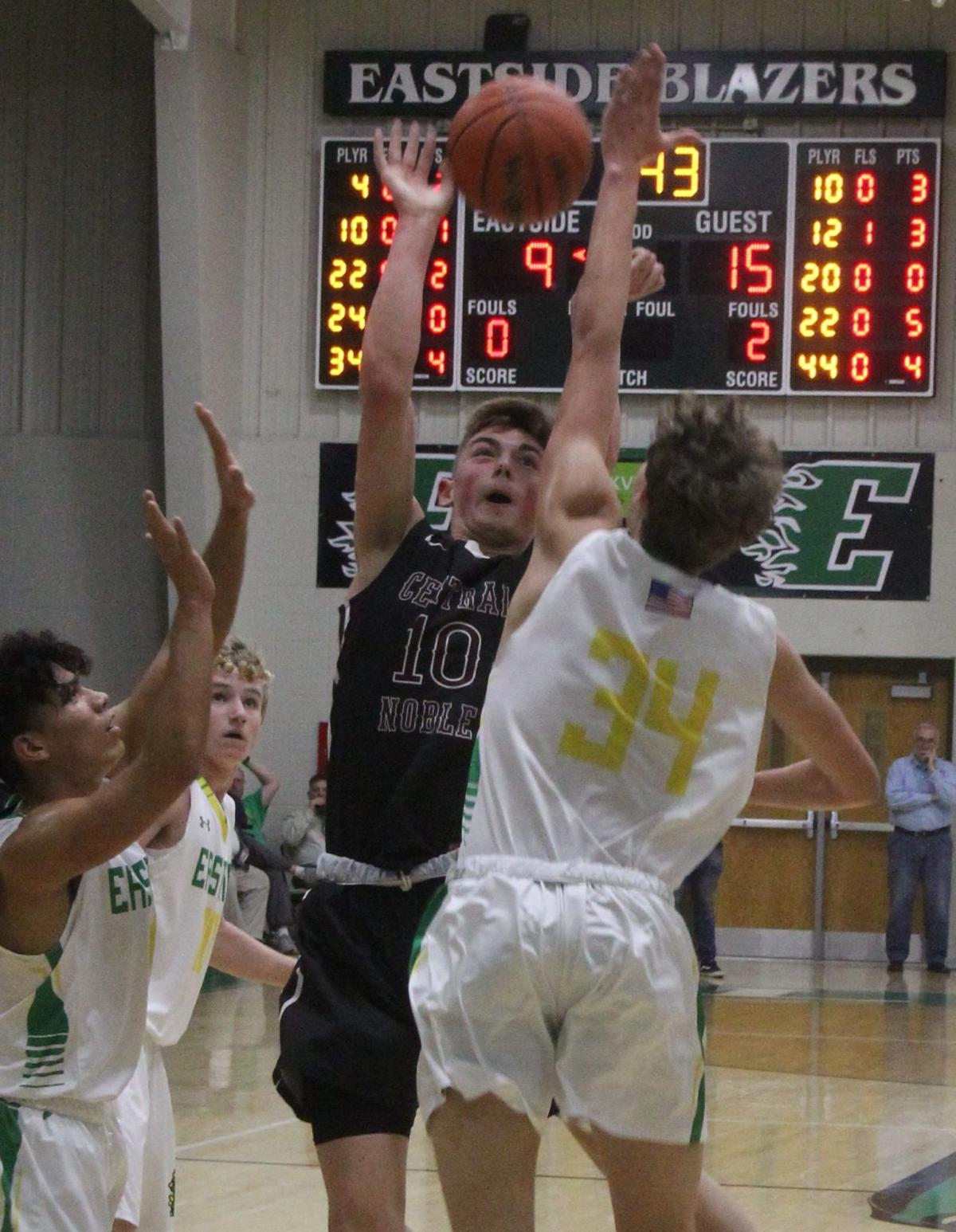 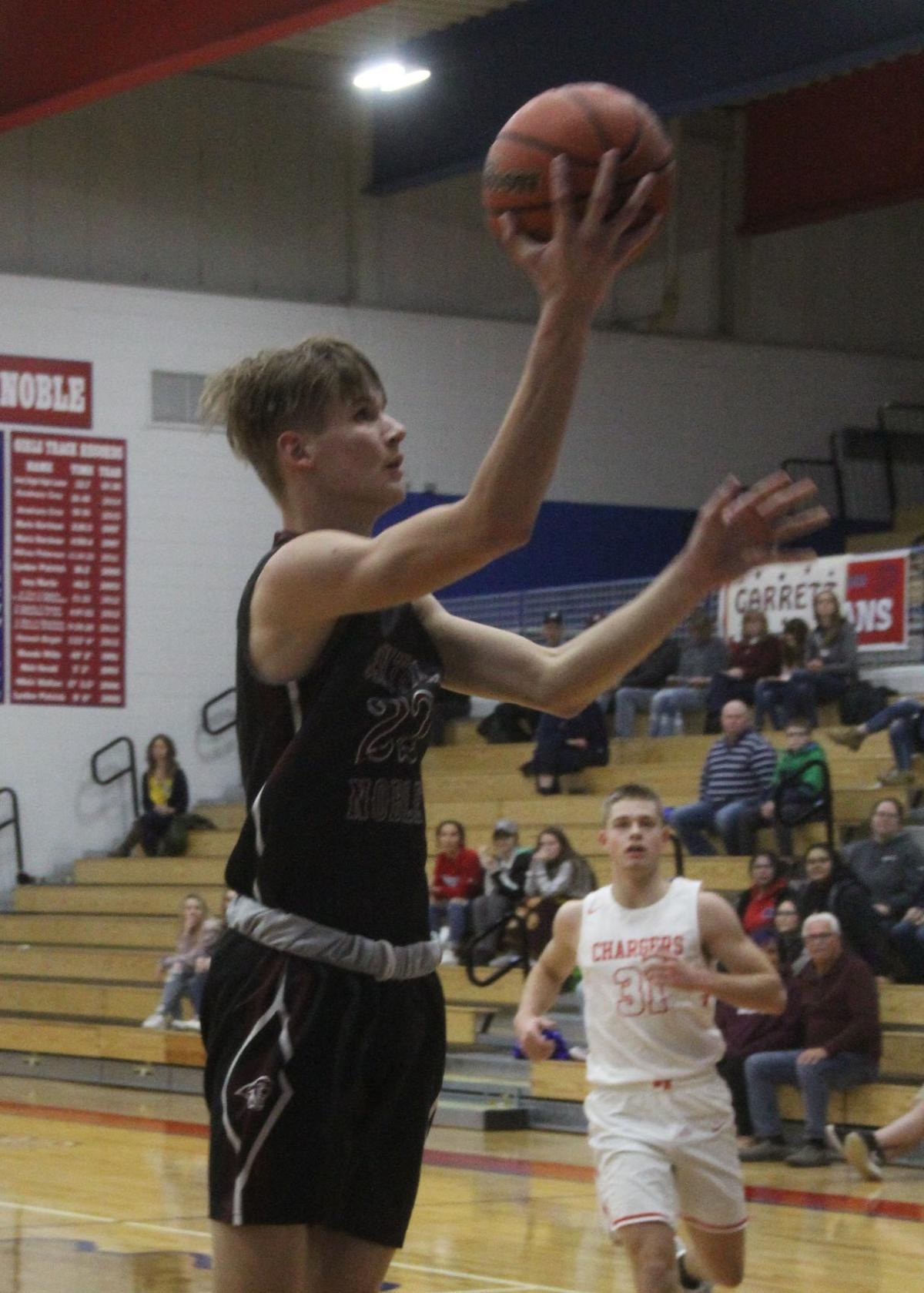 Central Noble's Logan Gard pulls down a rebound during his team's 57-47 win over Eastside in NECC tournament play Jan. 14.

The Cougar boys opened play Jan. 14 with a 57-47 win over Eastside and followed that up with a 70-51 win at West Noble the next night.

The Cougar girls had a pair of close victories, edging Eastside 41-38 on Jan. 14 and doing the same with Garrett the following night, 38-35.

Sophomore Connor Essigian led all scorers with 22 points, and classmate Logan Gard added a dozen points as the Cougars advanced.

Central Noble (9-2) jumped out to a 17-9 lead after the opening quarter, and maintained that advantage most of the night.

A rebound score by Gavin Pfefferkorn, followed by Gabe Trevino’s three-pointer brought Eastside to within four, 18-14, with 5 minutes, 2 seconds left in the second quarter.

Later, after a Cougar turnover, Trevino sank a free throw, and after another miscue, added a rebound score to cut the deficit to one.

Essigian responded with a three, then stole the ball and scored. After an Eastside miss, Sawyer Yoder scored to push the Cougar lead to 25-17.

A Gard score in the paint midway through the third extended Central Noble’s lead to double digits, 37-27.

Trevino hit a three and later scored in transition after a Cougar turnover to cut the gap to five, 39-34. Central Noble led 43-36 heading into the fourth.

The Cougars pulled away again at 51-38, but Eastside got a score inside from Logan Fry and a steal and bucket from Noah Johnson with 2:02 to play.

Two free throws each by Myles Smith and Ryan Schroeder put the margin back to double digits.

West Noble got 23 points from senior Josh Gross and 10 each from junior Brockton Miller and senior Joel Mast.

The Cougars led 19-17 after a quarter and 35-30 at halftime. Central Noble outscored West Noble 35-21 in the final two quarters.

Essigian’s rebound score and later three-point play midway through the second extended the Cougar lead to 30-21.

West Noble’s Brockton Miller stole the ball and scored before the halftime buzzer to cut the gap to 35-30.

Central Noble began to pull away in the third.

A baby hook shot by sophomore Logan Gard, followed by a transition basket by sophomore Ryan Schroeder pushed the advantage to 47-35 midway through the period. It was a 10-point game after three quarters.

Essigian scored his team’s first five points of the fourth, and Schroeder and Yoder added buckets as the lead grew to 62-43.

With 36.3 seconds left in regulation, Cougar freshman Meghan Kiebel grabbed a rebound of a teammate’s missed free throw, scored and completed a three-point play to provide the final margin in a thrilling opening game.

Just before, junior teammate Bridgette Gray missed the front end of a bonus. Kiebel came in from the outside of the lane, grabbed the rebound, scored and drew a foul to make it 41-36 Cougars.

Eastside junior Sullivan Kessler scored on a backdoor layup with 19.5 seconds left. The Blazers had a chance to tie it when Central Noble missed both ends of a double bonus on its next possession.

Eastside called timeout to set up a final shot, but Central Noble’s sticky defense prevented the hosts from getting off a qualify shot before time ran out.

Kessler led all scorers with 15 points. Jaiden Baker and MacKensie Rieke added eight points each for the Blazers.

Central Noble made just 3-of-16 free throw attempts (19 percent) for the game, but still managed to hold off Garrett.

Garrett’s only lead of the night came on Nataley Armstrong’s three-pointer from the left wing with 2 mintues, 54 seconds left in regulation.

Central Noble freshman Meghan Kiebel answered with a bomb of her own to put her team right back on top, 35-33.

In the final 33 seconds, the Cougars missed the front ends of three bonuses, and the first of a two-shot foul.

With the Cougars leading 37-35 with 1.9 seconds left, Armstrong drew a foul on a drive. Her first shot was no good. Needing to miss the second shot for a possible rebound, her attempt didn’t draw iron, and Central Noble got the ball back.

Central Noble led 14-9 after the first quarter and 20-18 at halftime on the strength of double-digit offensive rebounds. Bridgette Gray gave her team a seven-point lead early in the second.

Garrett got even on two free throws from Faith Owen and a three-point play by Bailey Kelham with 2:12 left in the half.

A rebound score by Lydia Andrews put the Cougars back on top, and she later scored in transition. Garrett’s Abby Weaver closed out the first-half scoring with a bucket in the paint. Central Noble led 20-18 at the break.

Neither team could score in the third until Andrews finally got a three to go down from the left wing with 2:51 left. Garrett’s Kelham answered with one of her own seconds later. Andrews knocked down a jumper to the right side of the key before the quarter ended with the Cougars up 27-24.

Andrews led Central Noble with 12 points and Gray finished with 11.