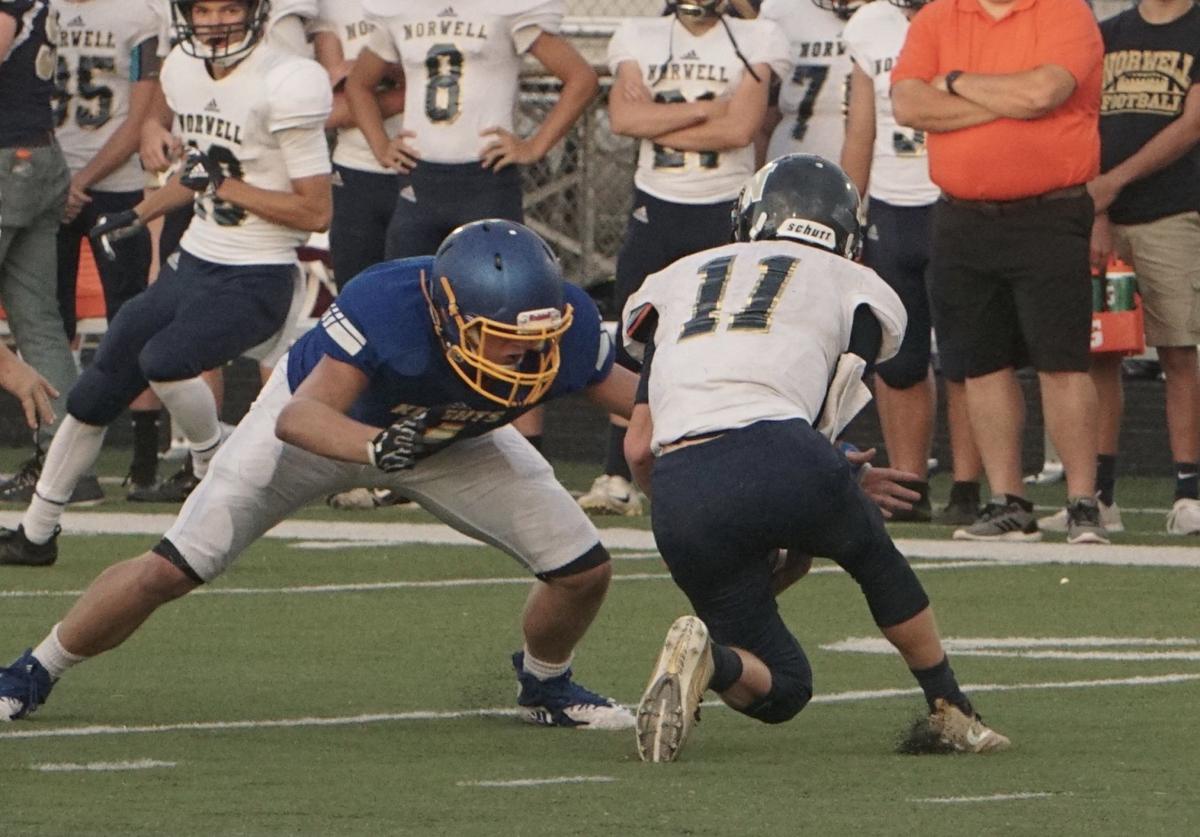 East Noble senior defensive lineman Spencer Pattee delivers a hit on Norwell quarterback Eli Riley after a muffed snap during a prep football game at East Noble High School on Sept. 21. Pattee and the East Noble Knights will play at New Haven tonight for a chance to win the Northeast 8 Conference title outright. 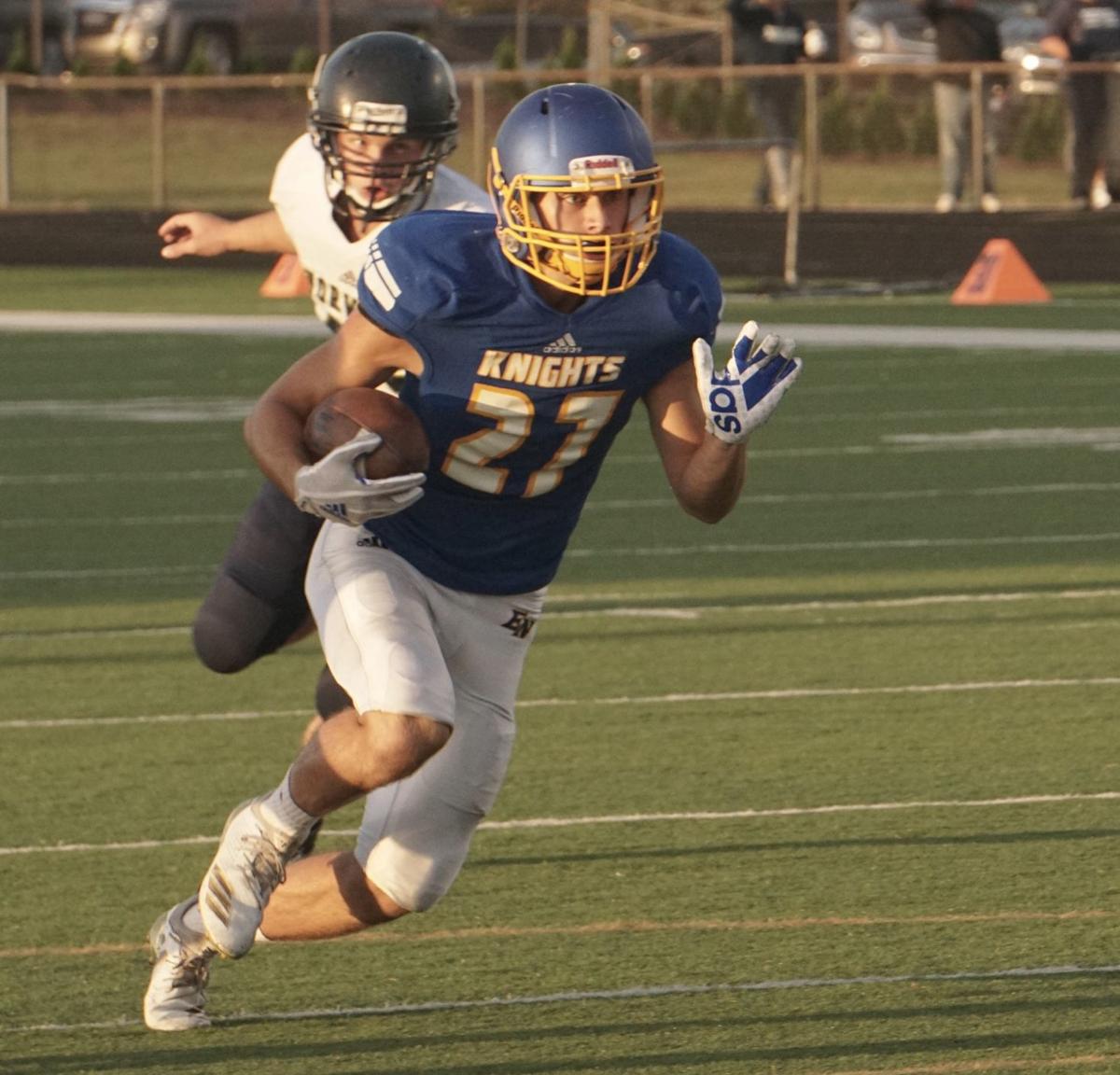 East Noble senior running back Kaiden Harshberger runs the ball near the goal line during Friday night's game against Norwell. The senior ran for 142 yards and three touchdowns.

East Noble senior defensive lineman Spencer Pattee delivers a hit on Norwell quarterback Eli Riley after a muffed snap during a prep football game at East Noble High School on Sept. 21. Pattee and the East Noble Knights will play at New Haven tonight for a chance to win the Northeast 8 Conference title outright.

East Noble senior running back Kaiden Harshberger runs the ball near the goal line during Friday night's game against Norwell. The senior ran for 142 yards and three touchdowns.

KENDALLVILLE — Norwell entered Friday night’s game at East Noble having dropped a close game against New Haven, and therefore falling two games behind East Noble in the conference standings. However, Norwell has one of the most formidable rushing defenses, allowing only 2.3 yards per carry.

East Noble was prepared, as it threw on the first play of both of its first two drives. The first one began after a Norwell punt into the wind fell at midfield, and the first play was a 36-yard pass to junior receiver Hayden Jones, setting up a 2-yard touchdown rush by junior quarterback Bailey Parker. Having missed the extra point, East Noble led 6-0.

On East Noble’s next drive, it drove to Norwell’s 25-yard line before failing on fourth down to turn the ball over. Norwell drove 15 plays for 75 yards down the field. It passed seven times after having thrown just 16 times against New Haven last week. Eventually, sophomore Eli Riley scored on a fourth down-and-1 rush at the goal line. Norwell muffed its extra-point snap but somehow completed a pass for the 2-point conversion and an 8-6 lead.

East Noble responded with a score of its own. After 10 plays, Harshberger took the ball in from seven yards out, but East Noble failed another 2-point conversion to lead by only 12-8.

East Noble recorded a quick score of their own immediately after, having started its next drive at its own 9-yard line because of a muffed punt. On third down at its own 37, East Noble executed a shovel pass, which it had incorporated into its offense in the second quarter, and Harshberger took the ball down the sideline for 62 yards and a score. East Noble converted this 2-point conversion and gained the lead, 20-15.

To begin the second half, Harshberger fumbled the ball and Norwell recovered on East Noble’s 36-yard line. Two plays later — a 29-yard pass to senior Landon Geiger and another 7-yard pass to Geiger — scored seven more. Norwell gained the lead, 22-20.

It wasn’t until 2:19 was left in the third quarter that East Noble scored again. Harshberger received another shovel pass, similar to the one he scored on in the first half, and went 46 yards, tiptoed the sideline for eight yards and then scored a touchdown. Junior wideout Gage Ernsberger caught the 2-point conversion for a 28-22 lead.

After an interception by senior defensive back Wallen Mayson, East Noble took over on its own 12-yard line. A 22-yard run by Harshberger pushed the Knights across midfield, and after a Harshberger first down run inside the 5-yard line was called back on a holding penalty, Parker backpedaled on a strong rush from Norwell. Parker lofted a ball off his back foot while Ernsberger found space in the blue end zone. The ball fell into Ernsberger’s hands for a 21-yard score, and after Jones converted the 2-point conversion, East Noble led 36-22.

On a 5-minute drive by Norwell to try to pull within a score, Riley threw for the end zone on fourth down, but it was picked off by Parker, who returned it to Norwell’s 31-yard line.

East Noble ran the clock out to beat Norwell, 36-22, and improve its conference record to 4-0.