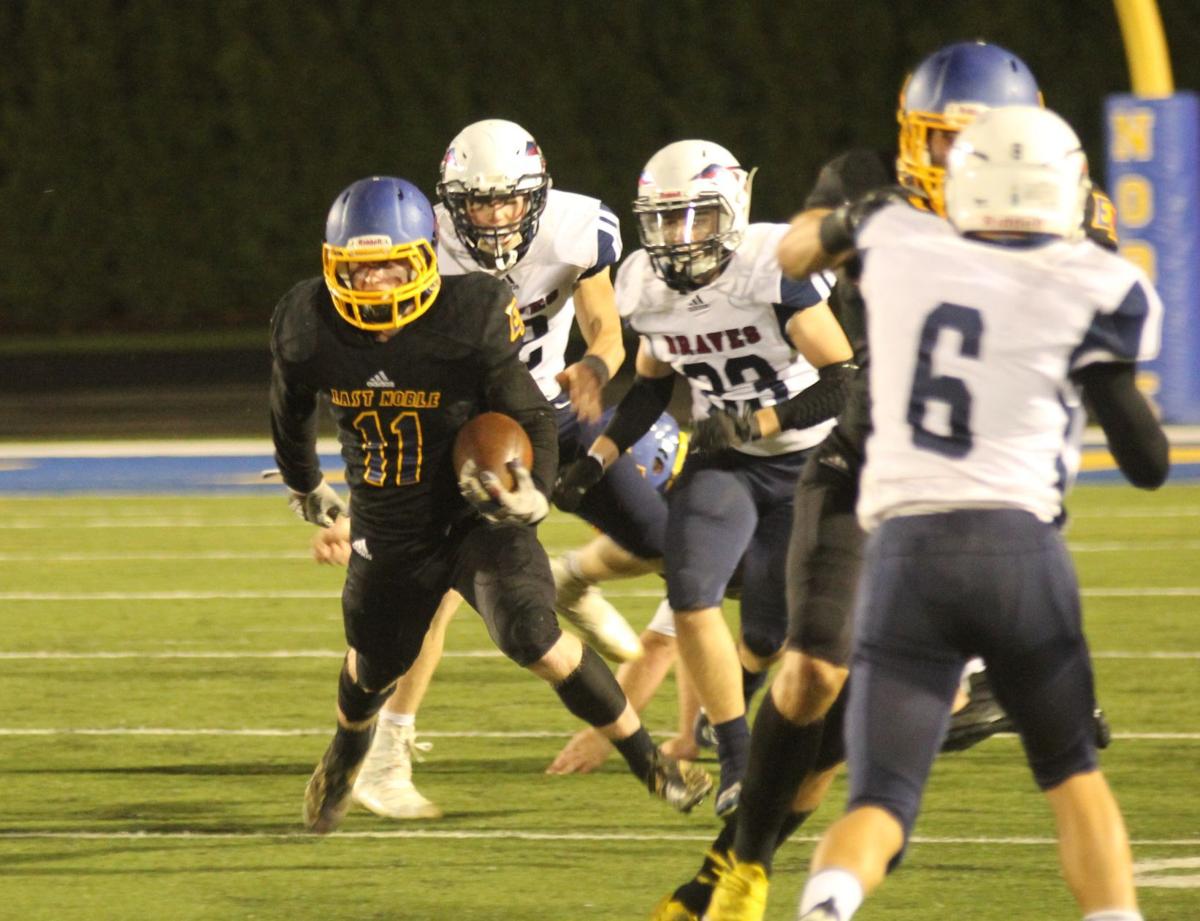 East Noble’s Ethan Nickles cuts up field against Bellmont during the first half of Friday’s game in Kendallville. 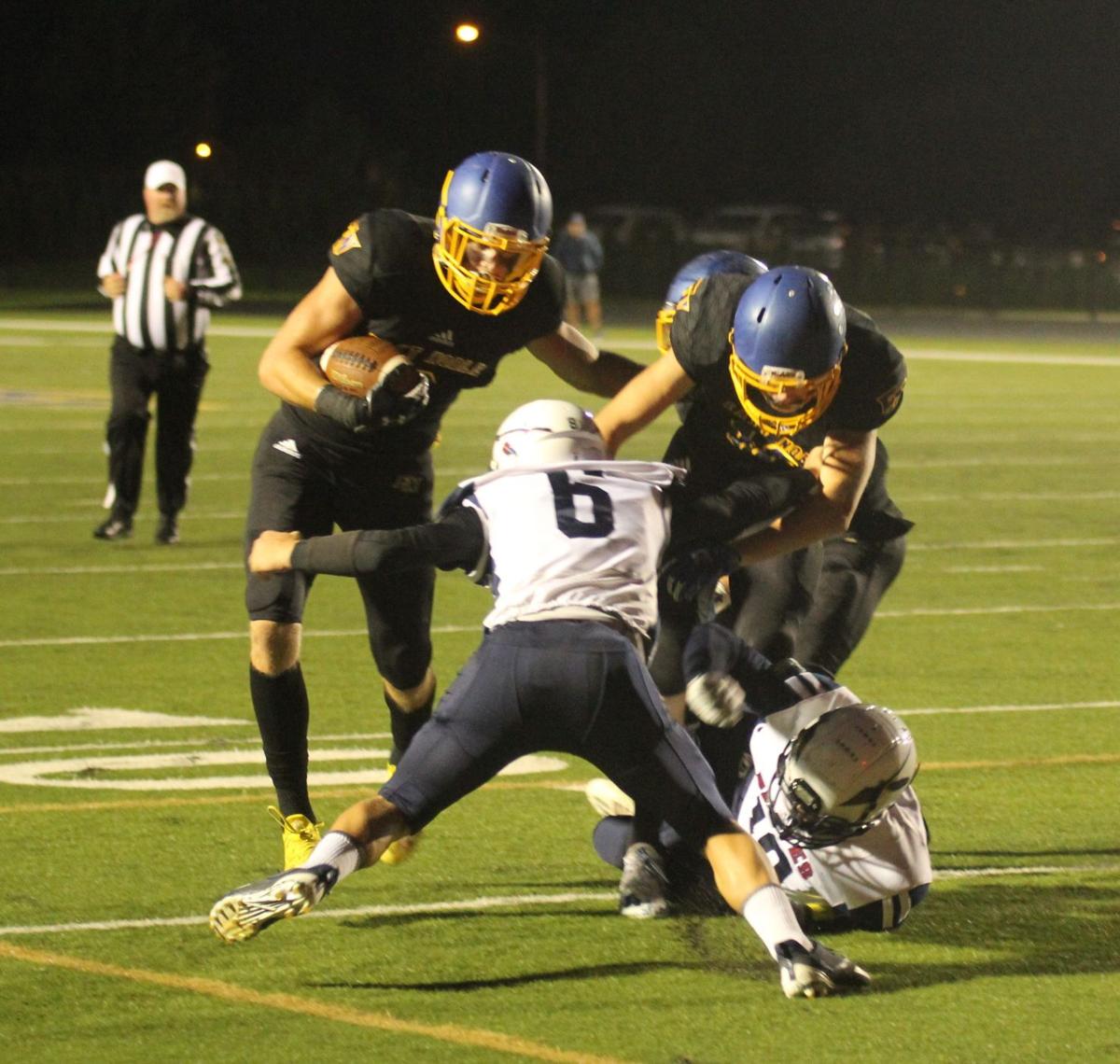 East Noble's Rowan Zolman tries to evade Bellmont's Isajaha Thatcher as Keegan Corbin blocks him during the first half of Friday's game in Kendallville.

East Noble’s Ethan Nickles cuts up field against Bellmont during the first half of Friday’s game in Kendallville.

East Noble's Rowan Zolman tries to evade Bellmont's Isajaha Thatcher as Keegan Corbin blocks him during the first half of Friday's game in Kendallville.

The Class 4A No. 13 Knights (6-2, 5-2 NE8) were up up two scores in the first three minutes and were up 43-0 at halftime. East Noble played its reserves for the entire second half.

Once the sectional draw came out on Sunday, the Knights knew it had two weeks to prepare for the rematch with Leo in the first round of sectionals. Friday’s game was another chance for East Noble to work on itself before taking on the Lions.

“We’re already starting to mentally preparing for next week. We just challenged the kids to come out and play fundamental football tonight,” East Noble coach Luke Amstutz said. “We didn’t overly focus on Bellmont. We talked about the basics said, ‘Let’s play some good football.’”

East Noble returned the opening kickoff to the 50 then scored three plays later with a 34-yard pitch and catch from Zander Brazel to Nick Munson. A good two-point conversion made it 8-0 75 seconds into the game.

The Knights recovered the ensuing onside kick, then Ethan Nickle powered his way into the end zone a few plays later for the 10-yard touchdown. Nickles also scored the two-point conversion for the 16-0 score.

After a three-and-out from the Braves, East Noble earned its second blocked punt in two weeks. Kainon Carico was the next Knight to score to make it 23-0.

On the first play of the second quarter, Nick Munson picked off pass from Bellmont’s John Ulman. East Noble took advantage of the turnover, and Brazel hit Brett Christian over the middle for a 39-yard touchdown.

After Bellmont punt, Nickles had a 40-yard run to put the Knights in the red zone. Trace Holliday finished the job with a 3-yard run up the middle for the score to put his team up 36-0.

East Noble tacked on another score before halftime. Brazel threw a fade up to Rowan Zolman, who outjumped two Bellmont defenders in the end zone for the 27-yard touchdown and the 43-0 lead.

With the reserves in for the final 24 minutes, Bellmont was able to get on the board with a 33-yard touchdown run from Isajaha Thatcher.

“That was one of the most fun games I’ve been a part of, of this type, because so many guys got to get out there and make some plays, score some points, make some tackles and knocked down balls. That was great to see all of those young men get out there,” Amstutz said.

The 40-32 loss has been on the minds of East Noble for the last four weeks. Next Friday, they get a chance to settle the score with the Lions.

“The moment we lost to Leo we started to think about what it was going to take to beat Leo. That in some ways hurt us for a few games, because we had to start redesigning some things, moving some people to some new spots, trying some things that we knew we were going to have to do to play well and get better at some things,” Amstutz said.

East Noble started to see progress after the 17-0 loss to Norwell, and it feels that its peaking at the perfect time.

“I think we’re playing the best that we’ve played all year long right now. We’re the healthiest we’ve been all year right now,” Amstutz said. “That’s what you want this time of year.”