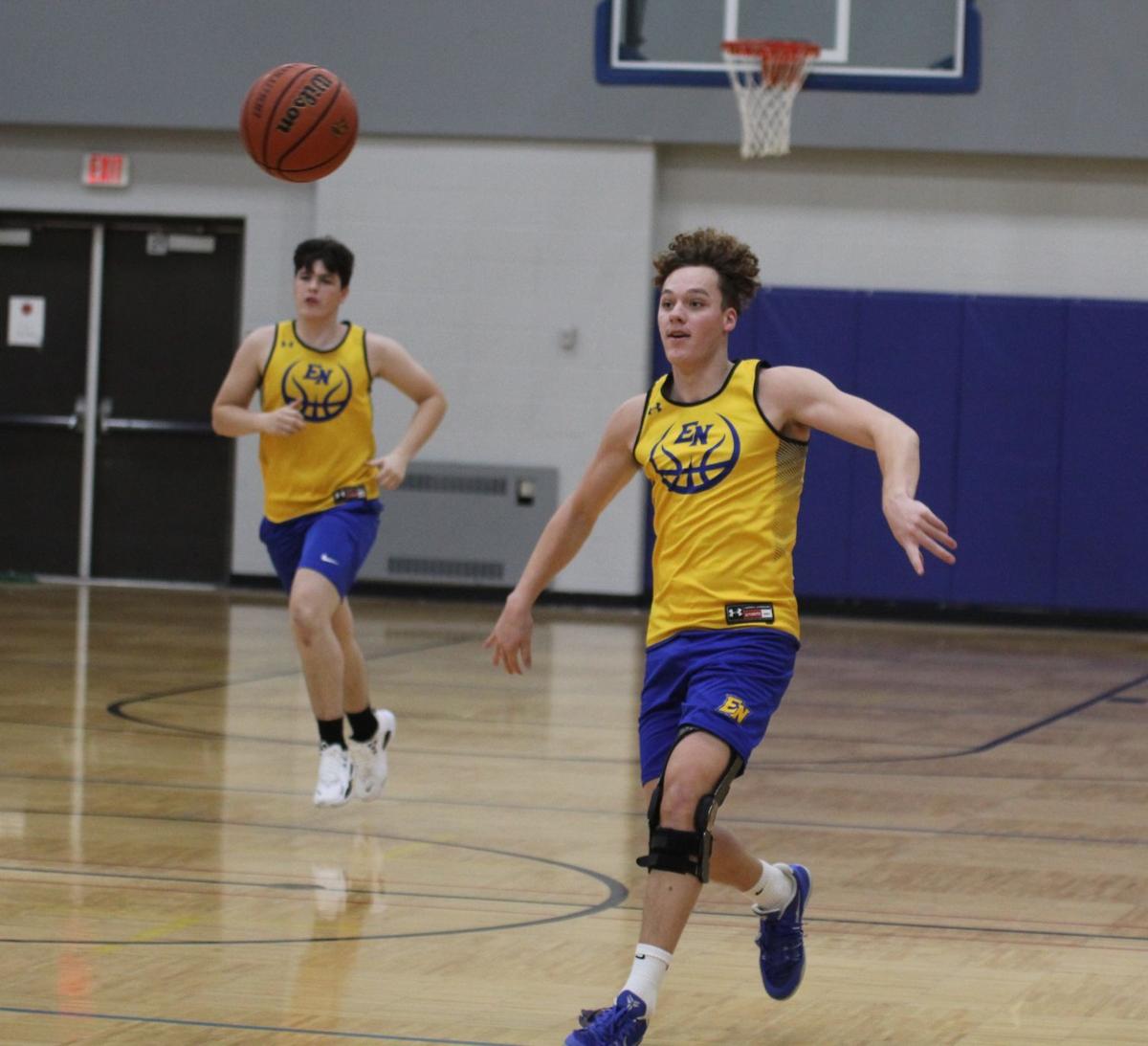 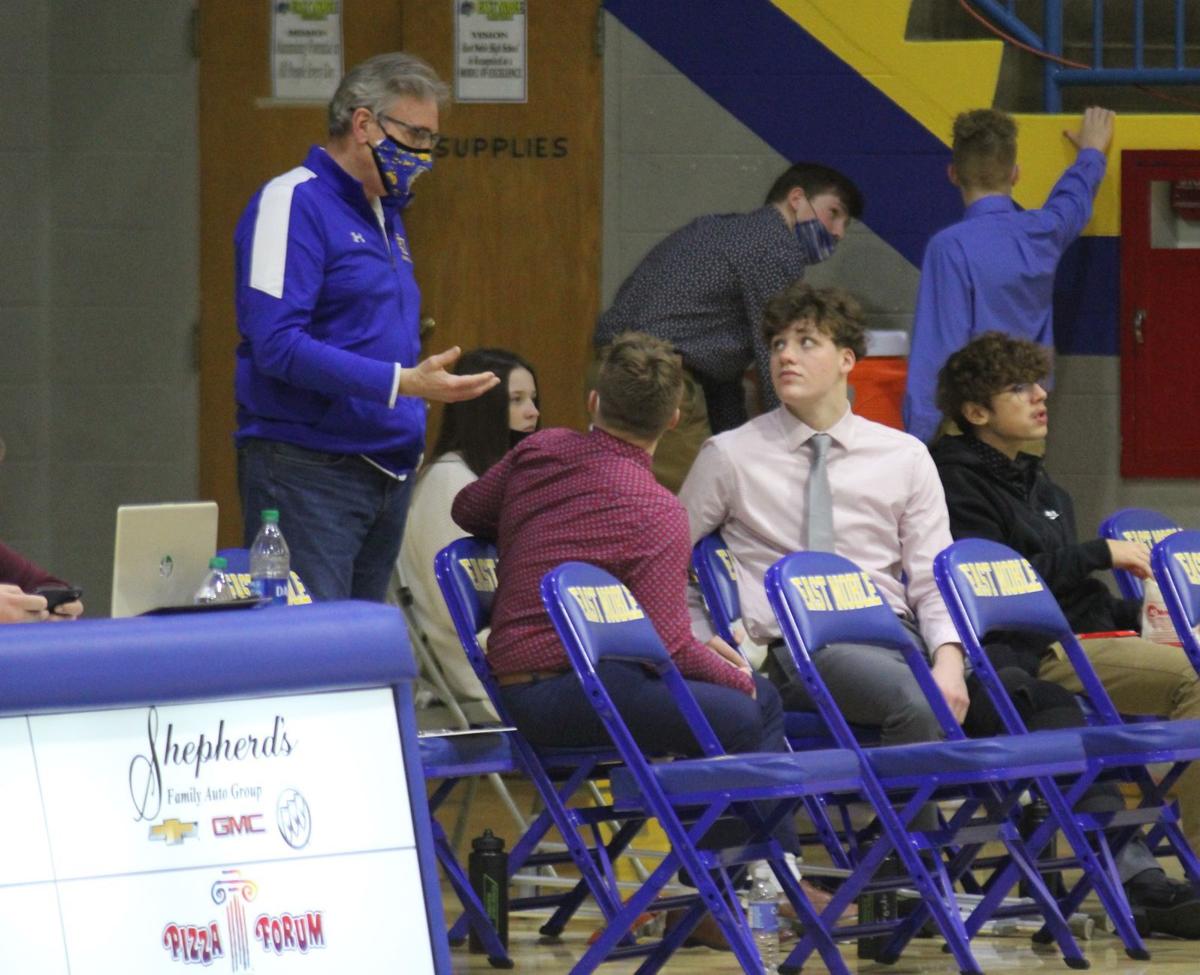 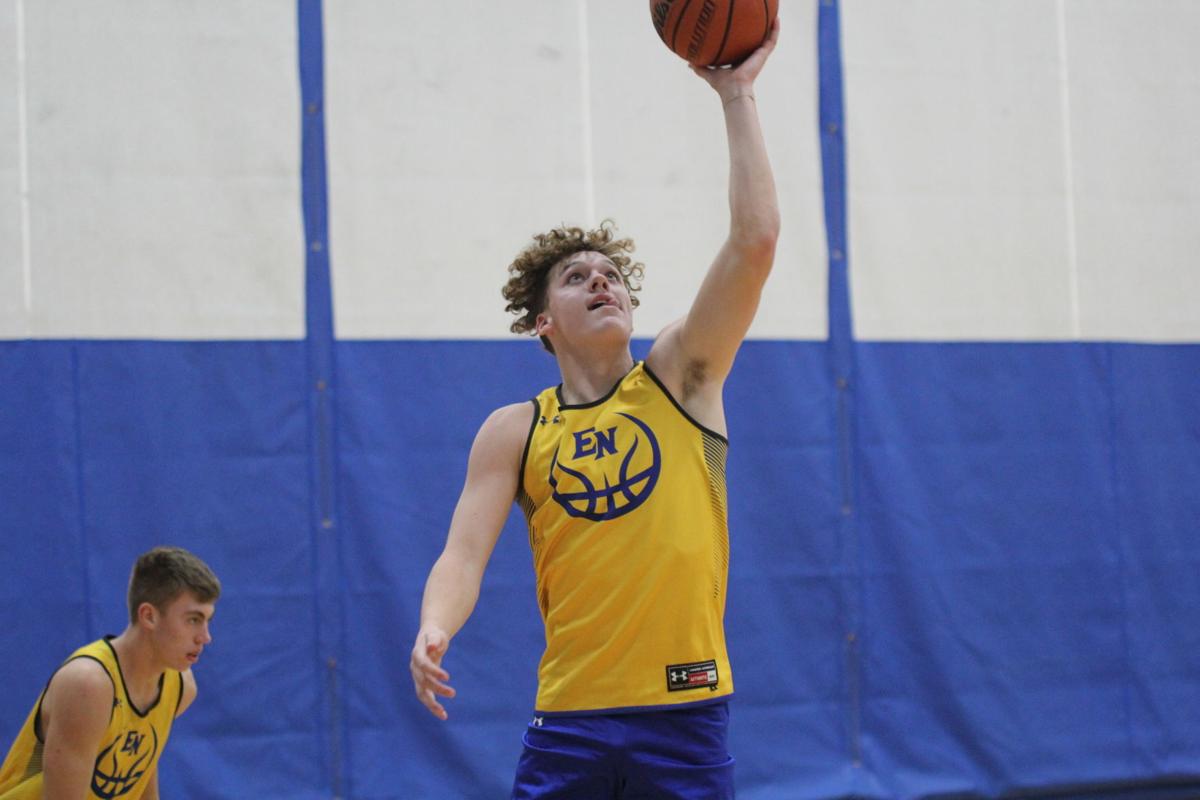 KENDALLVILLE — There are two dates that are always present in Spencer Denton's mind.

Two days that involve quite a bit of pain and lot of heartbreak.

The East Noble senior makes his return to the basketball court tonight against West Noble after missing the last two seasons to two separate ACL injuries, both on his left knee.

It has been 997 days between the last played in a varsity basketball game.

During the time in between, Denton has been rehabbing and waiting for another chance to get back on the court.

"It's been really tough. Thankfully, I have a good strong family and teammates to keep me in good spirits, especially coming to practices and games," Denton said. "I missed like 40-something games. It was really rough seeing everyone out there having fun and not even being able to walk on the sidelines."

East Noble has played 45 games the last two seasons, and Denton has watched them all from the sidelines.

Denton was a role player his freshman season, averaging 2.8 points and 1.8 rebounds in nearly 10 minutes per game. He didn't play as much as he should have because of the talent that was on the roster, including Ali Ali, Brent Cox and Hayden Jones.

"On most other teams and most other years, he would have seen significant minutes as freshman and probably scored a lot of points," Former East Noble coach Ryan Eakins said.

However, Denton's role was going to grow, especially after the graduation of Ali and Cox.

"Going into his sophomore year, we expected him to be really good. I know he was excited," Eakins said. "Everyone knew Hayden Jones was going to be the focal point of opposing defenses that year, so we thought Spencer would have the opportunity to have a really good sophomore season as being the other guy on the perimeter."

Then a couple of months before the season, on Thursday, August 1, 2019 at the Kendallville YMCA, Denton was on the basketball courts, and he attempted a step-back move and his knee gave out on him.

"It was probably the worst pain I've ever felt, but I didn't think it was going to be something this bad," Denton said.

Denton left the YMCA, went home and within 15 minutes of walking in the door, he couldn't put any weight on his left leg.

"I knew something was up," Denton said.

He went to get it checked out the same day and found out that he did, in fact, tear his ACL.

"I was really down then," Denton said.

Even though he was down, Denton thought he had plenty of time to rehab before his junior season and would have two full seasons left at East Noble.

"I tried to take the positives most certainly. Learning the game and seeing it from a different perspective," Denton said. "I tried my hardest to do that, but it was still rough."

"You could see the disappointment in his voice, in his face and his body language. He took it hard that first year," Eakins said.

Denton was cleared a week after the end of the 2019-20 season and was starting to do some drills. The plan was to make a big comeback for his junior season and be the leader of the team.

During the offseason before his junior year, he matured physicality, was quicker and was jumping better than before. He was ready to go for his junior season.

"I know as a junior for sure, we expected him to be one of the best players in the area, a first team all-conference type of player," Eakins said.

On Saturday, November 21, 2020, East Noble scrimmaged Whitko at home. And it happened again.

But this time if felt different, and he wasn't sure it was the same injury.

"It actually wasn't as bad of a pain," Denton said. "I didn't go down. I just walked off the floor."

He said still has the video of the play that it happened on his phone.

After the scrimmage, Denton went to Fort Wayne and walked around the Glenbrook Mall just fine. But then he went and got it checked out. Same result as last time.

"I was even more devastated," Denton said. "That summer, I worked so hard, especially in quarantine, to get back to where I was only to get punched in the face again."

There it was. Rock bottom. Again.

"It was a long car ride home from Fort Wayne," Denton said. He said there weren't any tears shed by him, but there were from his parents.

It only got worse when he had to go to school the next week and tell the story, then retell it over and over.

"It's something you don't want to do," Denton said.

"As a coaching staff, we just collectively hurt for him, because that's really hard to go through once let alone twice," Eakins said.

So Denton had to watch another season from the bench.

"Spencer has one of those personalities that almost everyone wants to be around. Frankly, Spencer handled it a lot better than I would have at that age. For him to be on the bench and not be discouraged and be excited for his teammates when they did well and encouraging his teammates when they weren't having a good day, practice or game and not focus on himself, it's really admirable," Eakins said.

When Denton went down the second time, 80 percent of the playbook went out the window.

"Everything we had essentially went through him. With him getting hurt literally a week before our first game, we scrapped almost everything on offense and probably half of what we were going to do on defense," Eakins said.

"I feel like I got better working on rotations a lot," Denton said.

The injuries were tough to get over mentally, but Denton believes it's made him tougher. Both Eakins and current head coach Brandon Durnell said Denton has the "it factor" when it comes to playing basketball, so there was no way he was going to give up on the game he loves.

"He's just a hungry kid who loves basketball. He's a fierce competitor. I think he's going to have a big year, because he has the qualities to be a really good basketball player. He comes in a works every single day. I'm excited to see how he comes back and really it's a blessing that he's playing," Durnell said.

If Denton would have stayed healthy, there's a lot of "What could have been?"

"I truly believe that we would have had the chance to be in the top two or three in the school's all-time scoring list had he stayed healthy," Eakins said.

"Not really. I try not to think about it, especially because that's all my mom likes to talk about. 'Can you just shoot threes? No, mom I can't just shoot threes.' I'm still my same old self and I'm having a good time," Denton said.

"Knock on wood he's looked really good. He really hasn't played scared or looked like he's putting weight on the other leg to save it. He's playing with a lot of confidence," Durnell said.

Durnell hasn't put of expectations on Denton for the season.

"I just want to see him out there having fun and smiling," Durnell said.

Durnell just wants Denton to bring is his toughness and show off the skills he has worked so hard on the last two seasons.

"We need someone like that. A guy who isn't necessarily dirty, but a guy who is going to get after the guy he is guarding and wants to score," Durnell said.

Denton has always had a unique ability to create offense, which is something the Knights will need this season.

"Spencer is one of those guys that created a gap without one being there. He just put his head down and was able to get to his left and get to the rim," Eakins said. "With him being 6-3, when he got to the lane, he didn't have to wrap around the pass. He was able to dish the ball off in different ways."

The last varsity game was involved in was an emotional one. It was a loss to Northrop in the 2019 Class 4A DeKalb Sectional final.

"I remember sitting in the DeKalb locker room after that game. There were some tears shed then. I've wanted to get back to that moment. We wanted to win that sectional final. We'll see where we go this year, and that's one big goal and winning the Northeast 8," Denton said.

The emotions will be much different when he walks out on the court tonight against the Chargers. For 997 days, he's put in the work, gone through the rigors of rehab and spent quite a bit of time away from the court just to get back on it.

"I could see that moment being pretty emotional for me," Denton said. "I had a bunch of adrenaline going at the inter-squad scrimmage. I'm really looking forward to it."