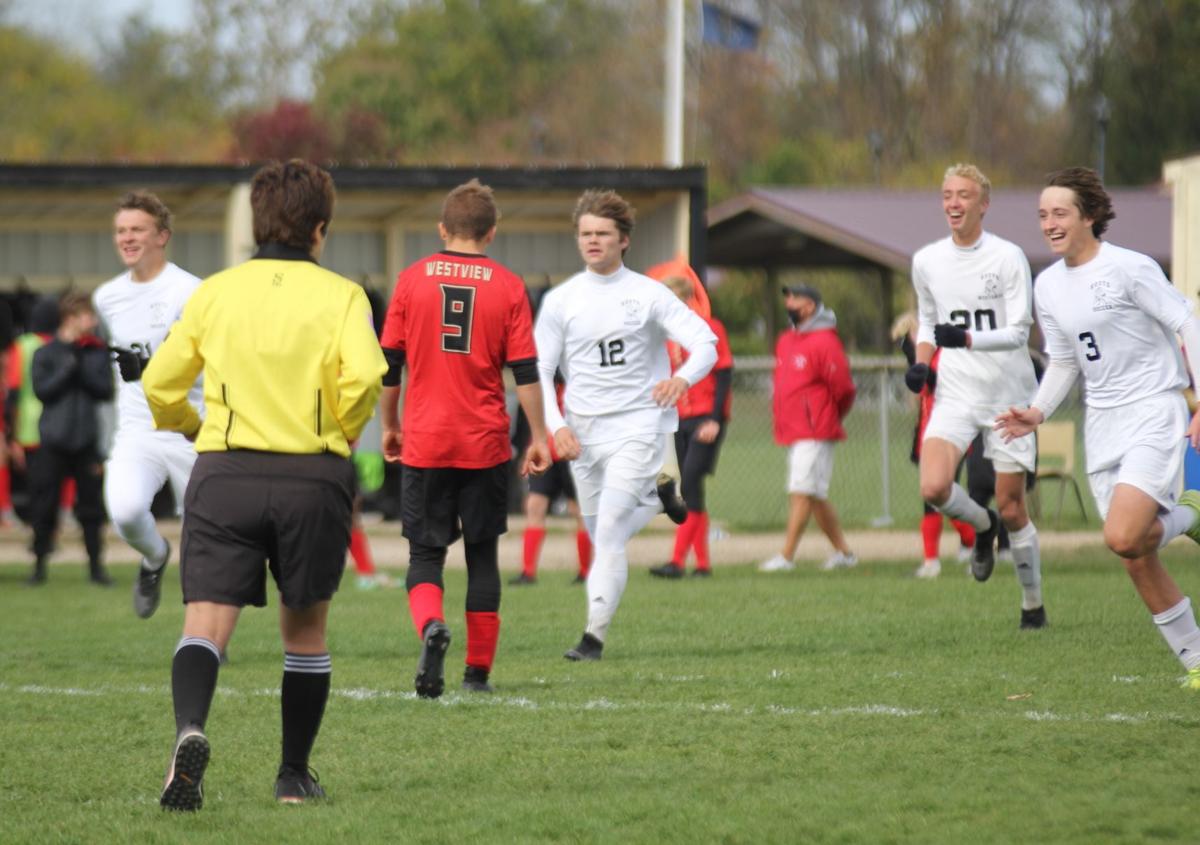 Westview’s Chandler Pushman (9) walks off the field while Kouts players run towards their keeper after defeating the Warriors 4-3 in penalty kicks at the Class 1A Regional Saturday in Argos. 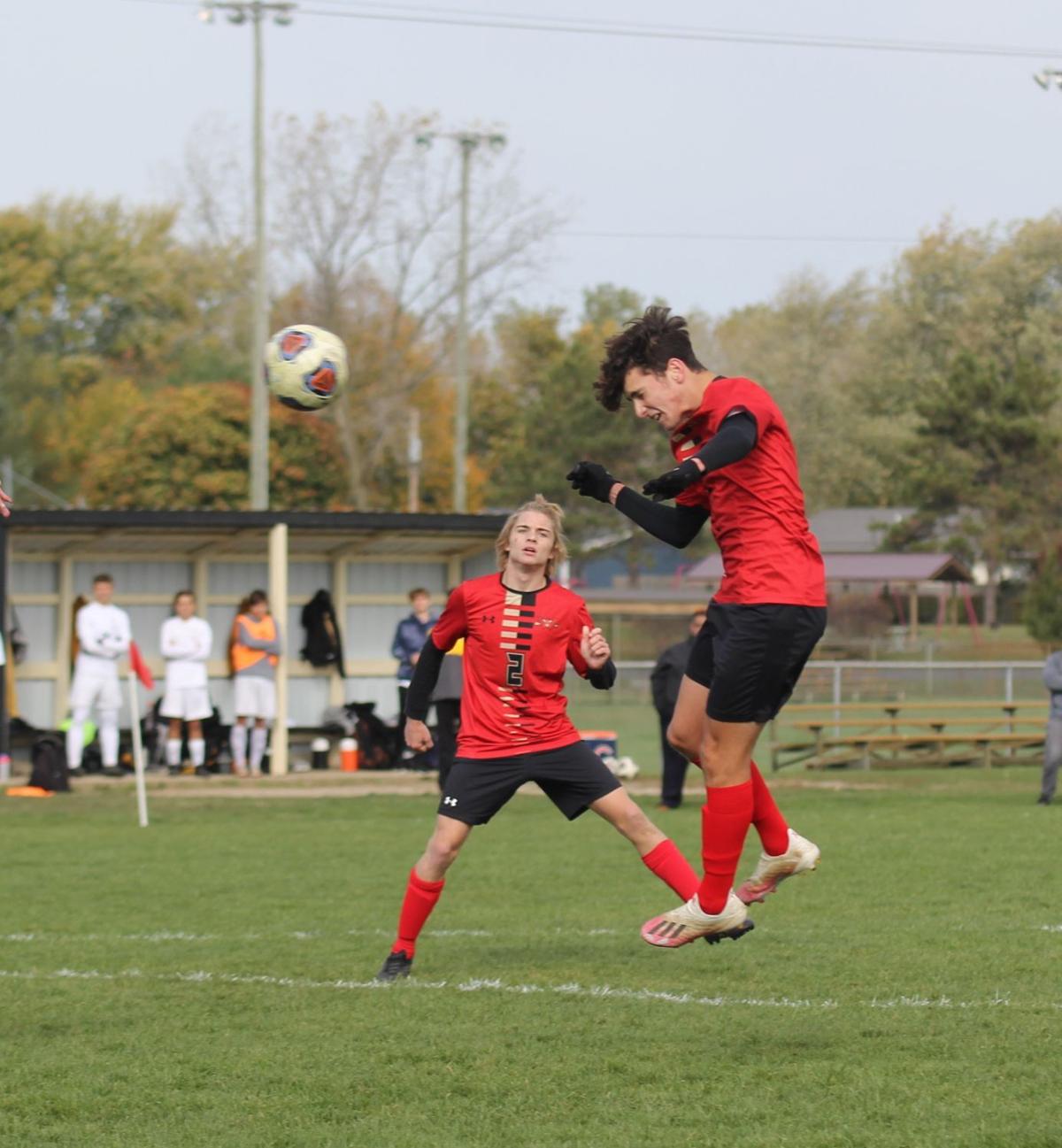 Westview’s Teague Misner heads a shot towards the goal during the second half of the Class 1A Regional semifinal match against Kouts Saturday in Argos. 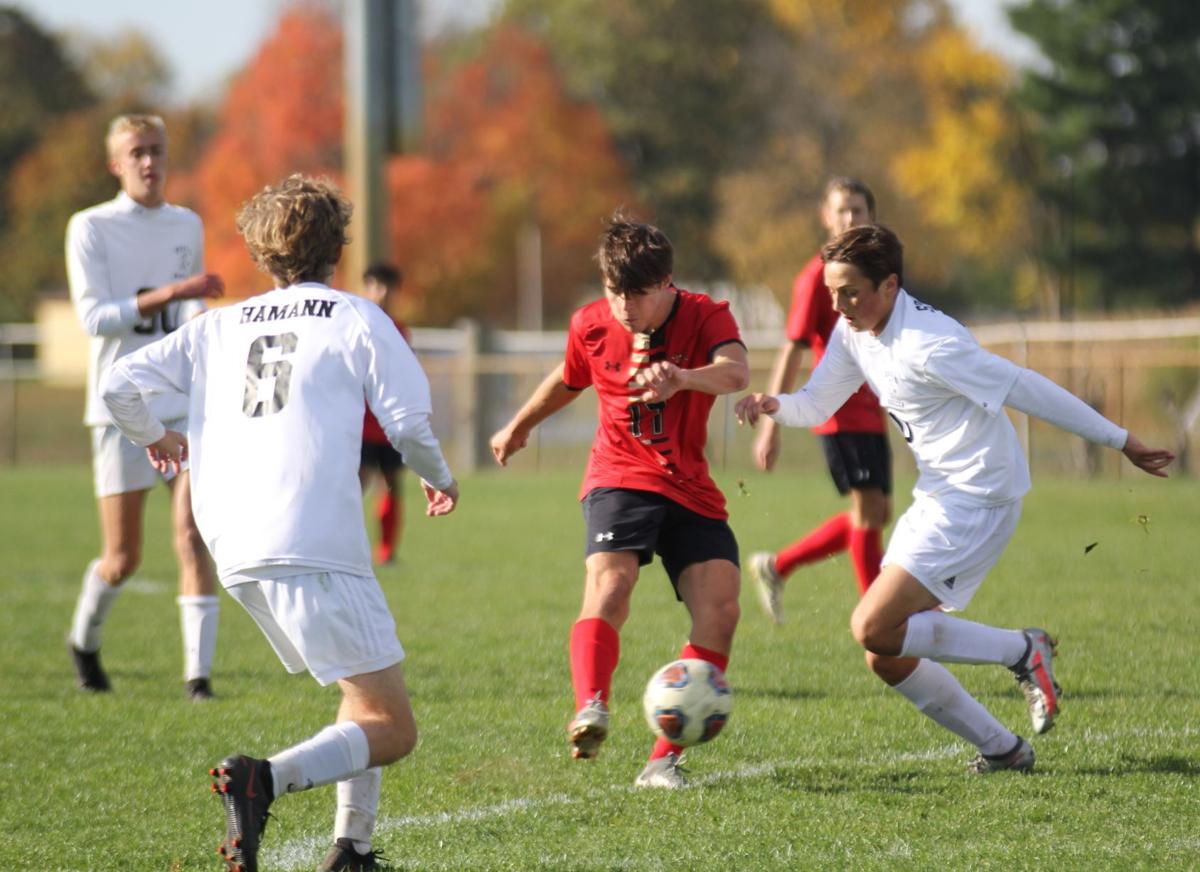 Westview’s Jadon Yoder, middle, takes a shot during the Class 1A Regional semifinal match against Kouts Saturday in Argos.

Westview’s Chandler Pushman (9) walks off the field while Kouts players run towards their keeper after defeating the Warriors 4-3 in penalty kicks at the Class 1A Regional Saturday in Argos.

Westview’s Teague Misner heads a shot towards the goal during the second half of the Class 1A Regional semifinal match against Kouts Saturday in Argos.

Westview’s Jadon Yoder, middle, takes a shot during the Class 1A Regional semifinal match against Kouts Saturday in Argos.

ARGOS — “It hurts. This is a pretty big statement, but I don’t think the better team won.”

The words of Westview boys soccer coach Jamie Martin with tears in his eyes after his team lost 4-3 in penalty kicks to Kouts in the Class 1A Argos Regional on Saturday.

The match was 1-1 at the end of regulation and stayed that way through both of overtime periods. Even the penalty kicks were tied, 3-3, after the first five rounds, forcing sudden victory penalty kicks.

Both teams missed their first attempt in the sixth round of penalty kicks, and after Kouts scored on its next attempt, Westview’s shot was tipped over the net, giving the Mustangs the win.

“Unfortunately, it is what it is. We put our fate in PKs. It’s a tough way to go,” Martin said. “We held them scoreless for a long, long time.”

In fact, it was almost 77 minutes that the Mustangs (13-0-4) were held scoreless until Jeremy Ryan bent a corner kick into the goal to tie the match up, 1-1, with 3:14 left in regulation.

“We knew coming in that they were good at corners, and we gave up a lot of corners. Eventually, they got us,” Martin said.

Kouts finished with 11 corner kicks in the semifinal match to seven by the Warriors (12-8-1).

Westview’s goal came just after the 10-minute mark in the first half. Jadon Yoder dribbled deep into the box and tried to take a shot before the Kouts keeper came out. His shot went off the right side of his foot and rolled to the right, which is where Abdul Saleh was crashing and pushed it just across the end line for the goal.

“That’s the kind of thing we’ve been trying to do all season is crash that backside. Abdul got the start for Gramm (Egli), and he was in the perfect spot at the perfect time,” Martin said.

The Warriors were without Egli, Cael Misner and Carson Brown for Saturday.

Westview was the more aggressive team for most of the match. It outshot Kouts 22-6 on Saturday. The Mustangs were getting frustrated early on with how much pressure the Warriors were putting on them.

There were plenty of times Westview could have added to its lead, but the Kouts keeper kept his team in it with timely saves.

The Mustangs started possessing the ball more and creating opportunities late in the second half, which led to more corner kicks. Overall, the Westview defense played well enough to win.

“We knew they liked the through ball and we play a little deeper and didn’t give them room to run, because we knew they were also fast. The short field helps that too,” Martin said.

Westview returns quite a few key pieces from this year’s team that won 11 straight matches, the Northeast Corner Conference Tournament championship and its first sectional title since 2016. That has Martin excited for the future of his program.

“I think this is just the start. I knew coming into this year that we were going to rebuild some, and I knew I had some good, young guys coming up,” Martin said. “To have everyone pretty much everybody besides my defenders back feels really good. I’m looking forward to the next three or four years. We’re excited about our future.”