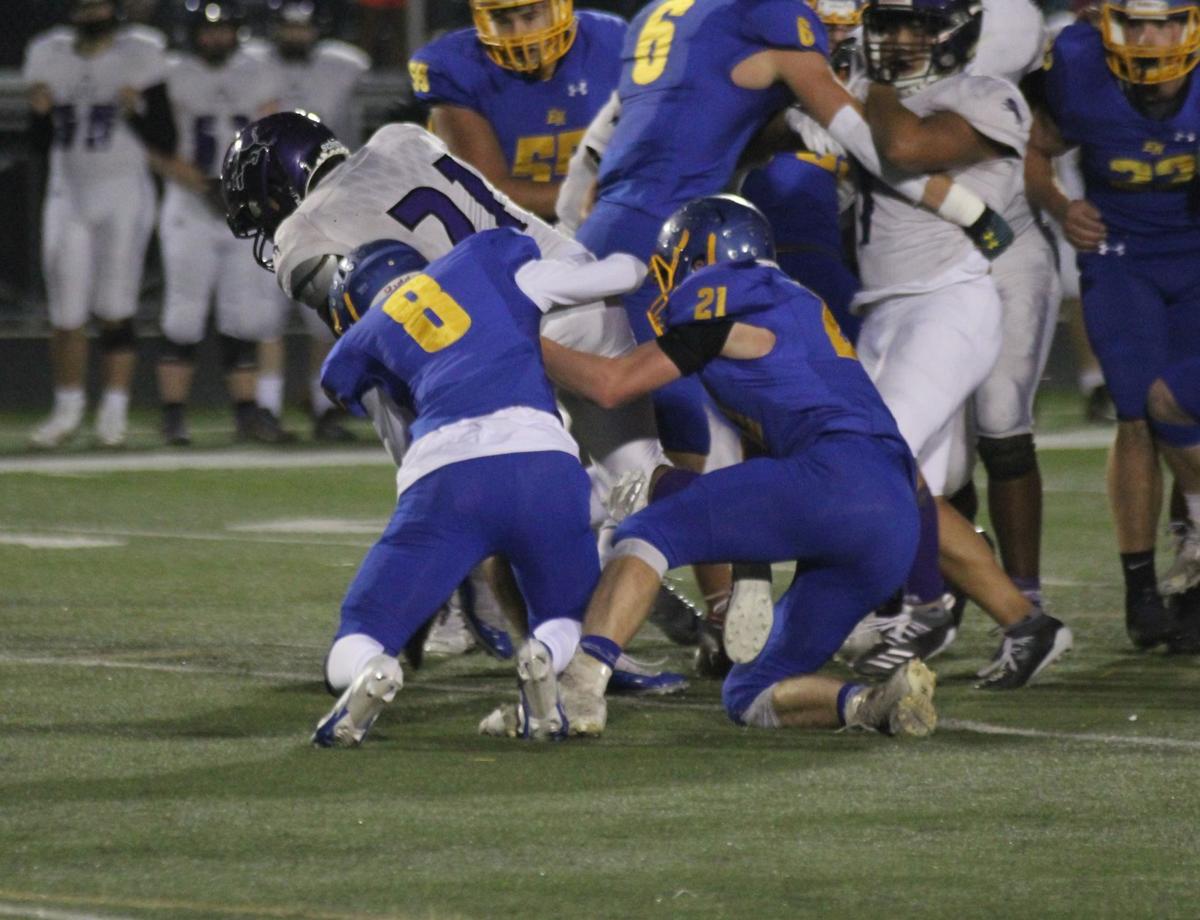 East Noble’s Dalton Stinson, left, and Nolan Rhoades bring down Leo’s Carson Hoeppner during the first half of Friday’s sectional game in Kendallville. 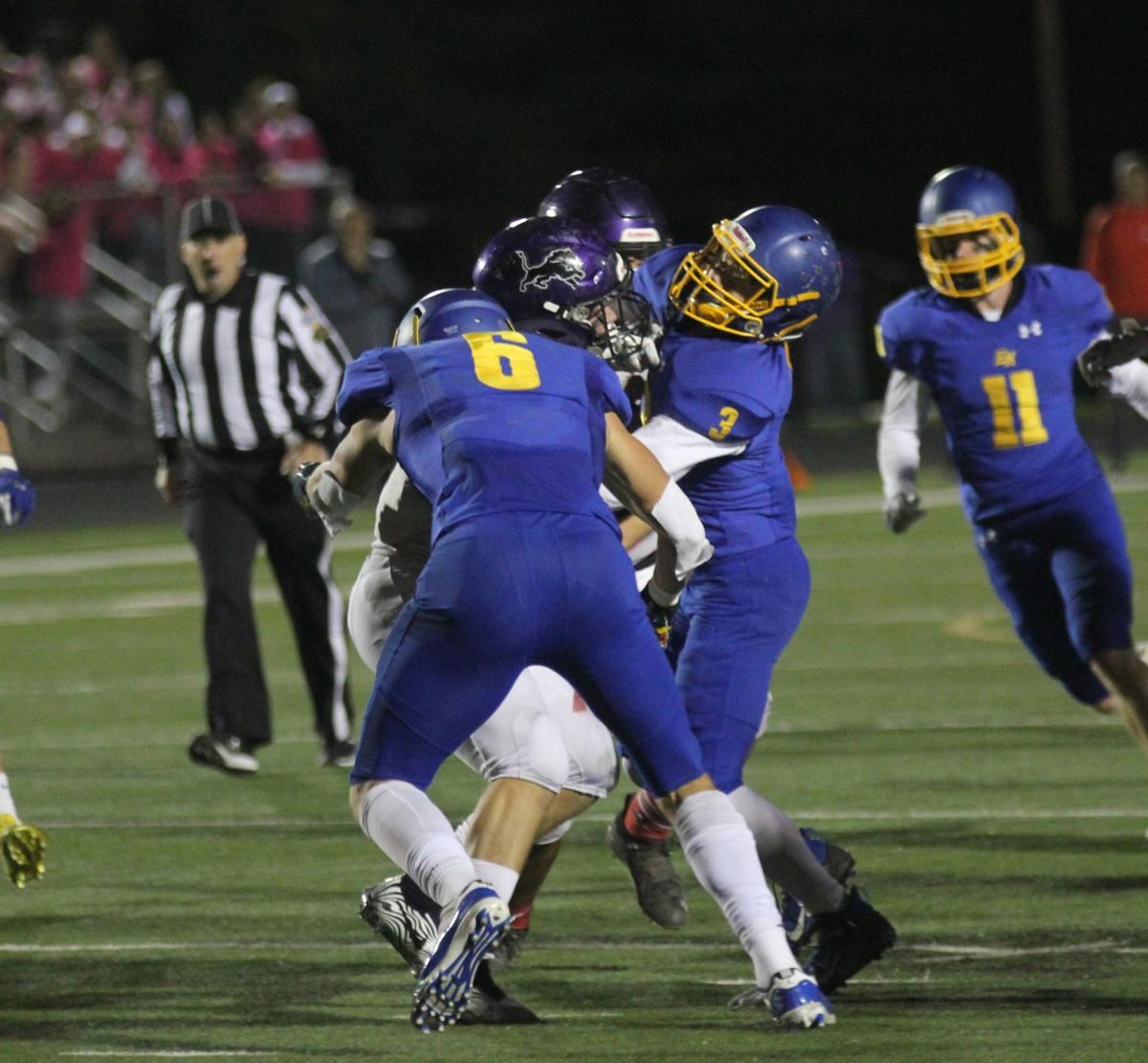 East Noble's Rowan Zolman, left, and Aidan Sprague bring down a Leo ball carrier during the first half of Friday's sectional game in Kendallville.

East Noble’s Dalton Stinson, left, and Nolan Rhoades bring down Leo’s Carson Hoeppner during the first half of Friday’s sectional game in Kendallville.

East Noble's Rowan Zolman, left, and Aidan Sprague bring down a Leo ball carrier during the first half of Friday's sectional game in Kendallville.

KENDALLVILLE — If you can’t believe East Noble-Leo was better the second time around, you better start believing.

Leo quarterback Jackson Barbour hit Kaeden Miller on a short out on the left side, then Miller danced inside the pylon to put the Lions (10-0) up 32-29 with 4.9 seconds left.

The Knights’ final play was stopped near midfield giving Leo the three-point victory and end East Noble’s season at 6-3.

East Noble scored on a 61-yard screen play from Zander Brazel to Rowan Zolman with 1:55 left to take the lead 29-26. The Knights’ score came 30 seconds after Leo scored a 12-yard run from Carson Hoeppner to put Leo ahead 27-21 with 2:26 remaining.

“I don’t even know what to say. You go from crazy elation to your heart getting pulled out,” East Noble coach Luke Amstutz said. “Credit to Leo making plays at the end of the halves. Truly, that was the difference. Our kids followed our plan as perfect as could be done.”

East Noble led 14-6 with 1:51 left in the first half. Miller returned the kickoff to near midfield, giving the Lions a short field. Seven plays later, Hoeppner scored on a sweep and a good two-point conversion tied the game with 3.7 seconds left before halftime.

Barbour, who hasn’t thrown a lot this year, was 8-for-10 on Friday for 79 yards and a touchdown. Leo rushed the ball for 275 yards, led by Hoeppner with 123 yards and two scores on 15 carries. Mason Sheron had 21 rushes for 117 yards and one touchdown.

“We took away a couple things that they do really well and forced them to throw the ball. They executed. They hadn’t proved all year that they could do that, and they did it,” Amstutz said.

Brazel was efficient for the Knights. He was 12-for-18 for 167 yards and a score. Nick Munson led the East Noble rushing attack with 60 yards on eight attempts. Zolman finished with 92 receiving yards on four catches.

After a four-and-out by East Noble to open the game, Leo marched down the field and capped off a 13-play, 88-yard drive with an 8-yard touchdown from Sheron.

The Knights gave the Lions a dose of their own medicine on their next drive, running a lot plays and chewing up clock. Kainon Carico ended the 16-play drive with a 1-yard run up the middle. A good extra point by Nick Klein gave East Noble the 7-6 lead with 7:58 left in the second quarter.

A quick three-and-out by the Lions gave the ball right back to the Knights. Munson lined up as the quarterback in the wildcat formation from the 14-yard line and weaved his way to the end zone to put East Noble up 14-6.

The Lion answered right before half with a score then scored again on the opening possession of the second half to turned a deficit into a six-point lead five minutes into the third quarter.

East Noble got into the red zone after Brazel hit Munson for an 11-yard gain on 4th and 10 on the Leo 19. Four plays later, a fade to Zolman in the end zone fell to the turf, giving the ball back to the Lions.

The Knights defense held strong and force a punt, which was blocked, putting the ball at the Leo 5 for East Noble. Carico scored on the next play with a run up the middle to give the Knights the 21-20 lead.

East Noble had a quite a few seniors on this roster, and plenty of them have been playing at the varsity level for three years and were on the 2019 Class 4A State Runner-up team. According to Amstutz, they helped changed the culture of the athletic program at East Noble.

“They’re just the best. They’re unbelievable kids. They’re fun, hard-working, caring and do everything you would want a high school football player to do,” Amstutz said. “They’re going to finish the season 6-3 with no championships, but the story is so much bigger than that.”