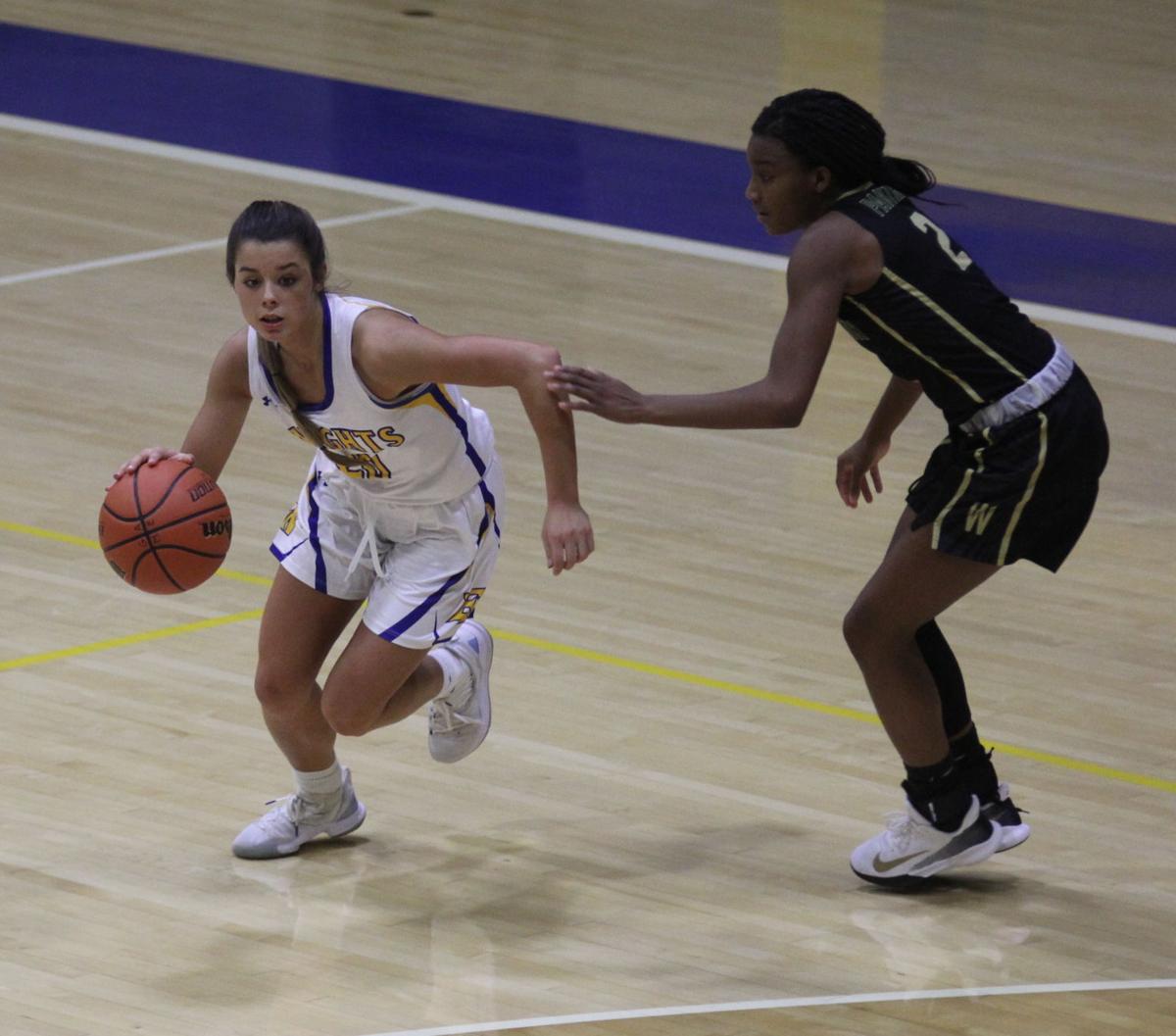 East Noble’s Kylie Garton, left, dribbles around a South Bend Washington player Saturday afternoon during the first half at the Big Blue Pit in Kendallville. 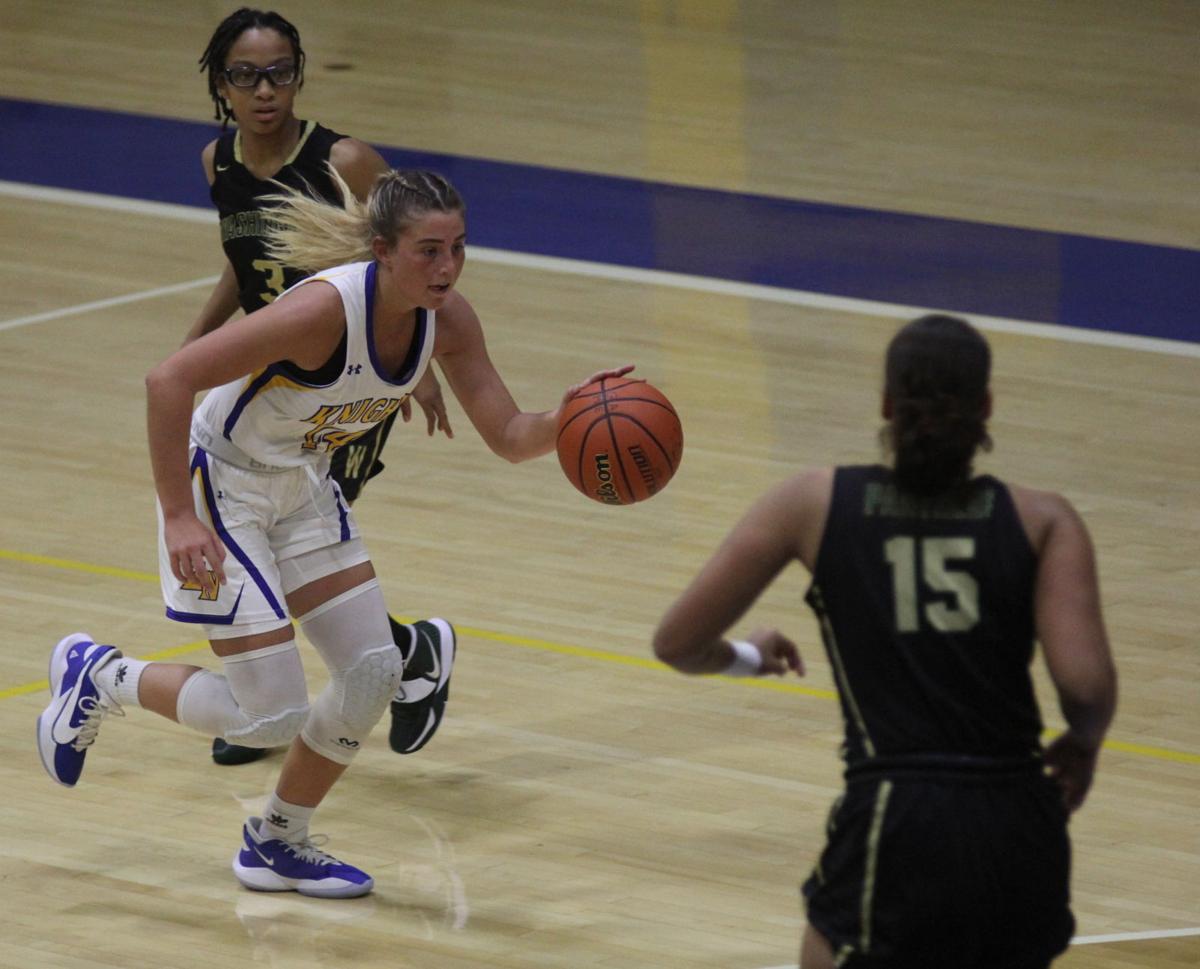 East Noble senior Karly Kirkpatrick dribbles the ball up the court in the first half Saturday against South Bend Washington in Kendallville.

East Noble’s Kylie Garton, left, dribbles around a South Bend Washington player Saturday afternoon during the first half at the Big Blue Pit in Kendallville.

East Noble senior Karly Kirkpatrick dribbles the ball up the court in the first half Saturday against South Bend Washington in Kendallville.

KENDALLVILLE — Girls basketball postponements are piling up due to positive tests for COVID-19 and related contact tracing. East Noble and South Bend Washington aren’t waiting around to make games up.

The Knights and Panthers found each other for a late Saturday afternoon contest in the Big Blue Pit. After losing at Class 4A No. 2 Penn Friday night 72-54, Washington downed EN 57-31 less than 24 hours later.

Washington and East Noble are choosing to replace instead of reschedule. They don’t want to be in a position where their schedules are backlogged where their teams are playing four or five games per week throughout January.

“We’ve missed some games already. Wherever there’s a date open, we want the kids to play,” Panthers coach Steve Reynolds said. “We don’t know where it’s (the coronavirus outbreak) going.

“Every practice and every game is a gift.”

The game started 24 hours after Knights coach Shawn Kimmel learned of his new opponent. He received film on Washington around 9 p.m. Friday and shared some ideas with his team on what it could exploit earlier in the day Saturday.

The Panthers (2-2) jumped out to an 8-0 lead. A three-pointer from Carly Turner was East Noble’s first points of the game with just under three minutes left in the first quarter.

Sophomore guard Rashunda Jones had eight points in the opening stanza and Washington led 12-7 after eight minutes. The Panthers led 21-9 midway through the second quarter. Despite 12 turnovers in the first half, the visitors led 25-15 at the intermission.

The Knights turned the ball over five times in the first 1 minute, 49 seconds of the second half as Washington scored the first six points of the third quarter.

“When fatigue set in, we lost discipline in our offensive schemes,” Kimmel said. “Spacing was the biggest issue for us.

“When we’re running our offense, we shot the ball very well. We dictated what we wanted to do with the basketball and we got the shots we wanted. A lot of them did not go through the rims.”

EN cut the deficit down to 10 a little less than a minute and a half later. Then Washington scored the next 13 points to take a 46-23 lead.

The Panthers only had one turnover in the third quarter as they outscored the Knights 22-11. Jones had 20 points and six steals.

“Rashunda really grew over the summer and that is carrying over to the season,” Reynolds said.

The Knights were without leading senior guard Avan Beiswanger for unspecified reasons. Kimmel said she will be back for Monday’s game at Carroll.

“Washington is really talented. They’re going to get us better,” he said.

“Against Concordia (at 58-34 road loss on Tuesday), we lost. Tonight, we got beat. It’s OK to get beat. They’re (Washington) going to get us better.”