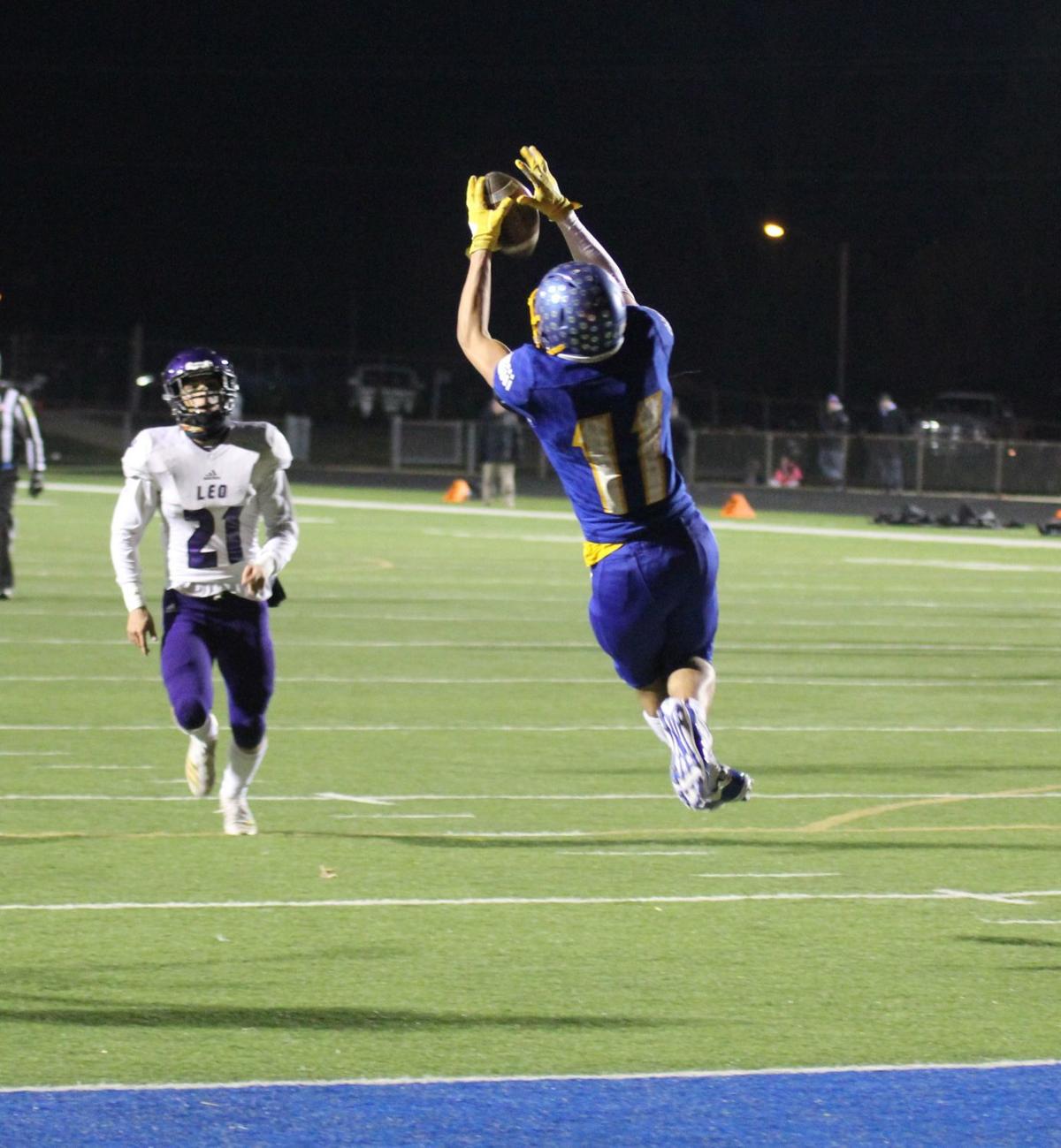 East Noble’s Hayden Jones, right, catches a touchdown pass during the second quarter against Leo in the Class 4A Sectional 19 championship game on Friday night in Kendallville. The Knights beat the Lions 14-7. 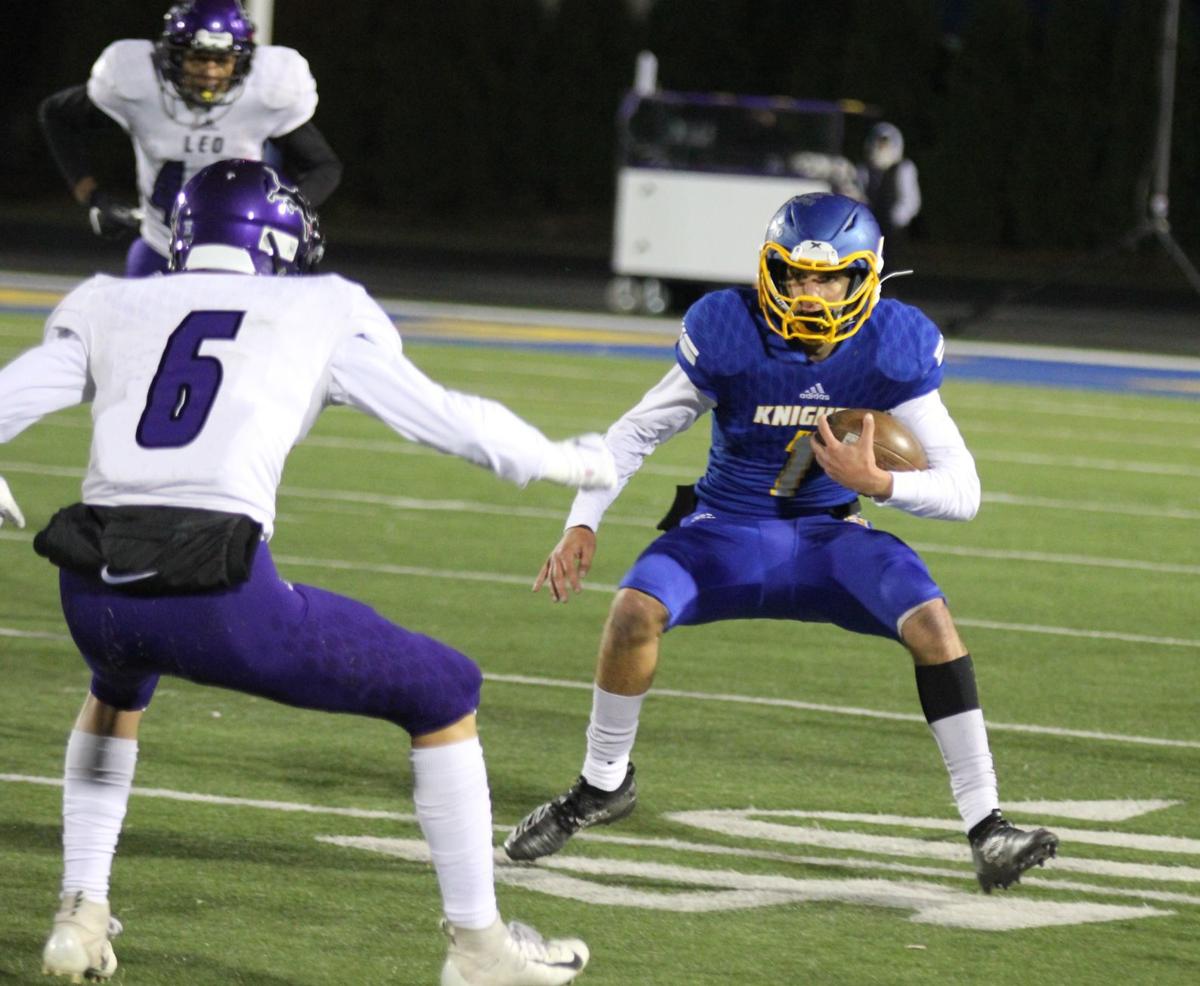 East Noble’s Bailey Parker, right, tries to evade a Lion defender during the first half of Friday’s Class 4A Sectional 19 championship in Kendallville. The Knights beat the Lions 14-7.

East Noble’s Hayden Jones, right, catches a touchdown pass during the second quarter against Leo in the Class 4A Sectional 19 championship game on Friday night in Kendallville. The Knights beat the Lions 14-7.

East Noble’s Bailey Parker, right, tries to evade a Lion defender during the first half of Friday’s Class 4A Sectional 19 championship in Kendallville. The Knights beat the Lions 14-7.

KENDALLVILLE — The wait was 16 years too long.

East Noble finally raised a sectional championship trophy after beating Leo 14-7 in a hard-fought, defensive struggle on Friday night in the Class 4A Sectional 19 title game that was sealed by an interception from Hayden Jones with 3:22 left.

“It feels great. It’s been a long time coming. We’ve got a bunch of hard-working guys, we have a community that supports us so well and it just feels so amazing,” Jones said.

It was also a long time coming for coach Luke Amstutz, who won his first sectional championship in 12 years as a head coach.

The Knights’ offense has received a lot of praise this season, and rightfully so, averaging almost 40 points per game. But it was the East Noble defense that came to play once again. After the Lions scored late in the second quarter, they couldn’t sustain long drives.

Leo only had one drive that was more than five plays in the second half, and it was a 13-play drive that ended with a Jones’ interception.

“I saw the quarterback rolling left, so I knew it was coming my way. We had the outside linebacker underneath, so I knew I could go jump it,” Jones said.

The Lions’ Peyton Wall had 72 yards in the first half and finished with 91.

“There was just some little things up front, changing some shades, changing some reads and things like that, “Amstutz said on adjustments made at halftime to slow down Leo’s running game. “But I think it has just been so long since we’ve played a team that came out and hit us in the mouth and competed. Tons of credit to Leo for doing that. They had a game plan, and their game plan was to keep the ball out of our hands.”

East Noble only had two possessions in the first half, seven for the night.

The Lions ran right at the Knights with their T-formation, lining up three running backs in the backfield.

Leo ran 14 plays (11 runs) taking more than eight minutes off the clock on the opening possession before Gage Ernsberger picked off a Barbour pass at the 5-yard line. Barbour finished 6-for-12 for 42 yards and three interceptions, including one from Brooks Miller.

The Knights were able to move the ball to midfield thanks to a one-handed grab by Nick Munson on third-and-long at their own 1, but the drive ended with a punt.

Once again, Leo kept at it on the ground, using seven minutes of clock and took an early 7-0 lead with a 10-yard run by Mason Sheron.

The Knights answered in quicker fashion, going through the air. On 4th-and-7 from the 21-yard line, Parker found Jones on a laser over the middle in the end zone for the touchdown.

“I saw the safety shooting over to (Jones) then he was look right at me, so I decided to look right at him and look him off to our tight end. He moved off of Hayden, which opened up things, and I just let it rip in there,” Parker said.

East Noble fumbled on its first two possessions of the second half, giving Leo a pair of short fields. But the Knights’ defense forced a three-and-out and a punt.

“Really our defensive line just got way more aggressive than it was in the first half. We realized they were getting pushed around a little bit. We came out and had an awesome second half. We just shut down the run game and forced them to pass the ball,” Parker said. “Then, people like Hayden Jones makes a play on the ball and it just demoralized them and takes all of the energy out.”

The punt pinned East Noble at its own five, but the Knights were able to quickly get out of danger, grabbing big chunks of yards with running back Justin Marcellus for 14 yards, then a catch by Brett Christian for 16. Parker finished the drive with another chunk play, a 33-yard sprint up the middle to give East Noble a 14-7 lead, which allowed the entire Knight crowd to take a collective sigh of relief.

That relief turned into excitement and joy shortly thereafter.

“Our defense stepped up and played phenomenal in that second half, which was the missing piece for us the last couple of years,” Amstutz said. “We’ve had some really good teams that just couldn’t compete in the run game against an elite NorthWood team. The senior class, they get to hang the banner up on the wall, and we’ll see what happens next week. But for right now, we get to be champions.”