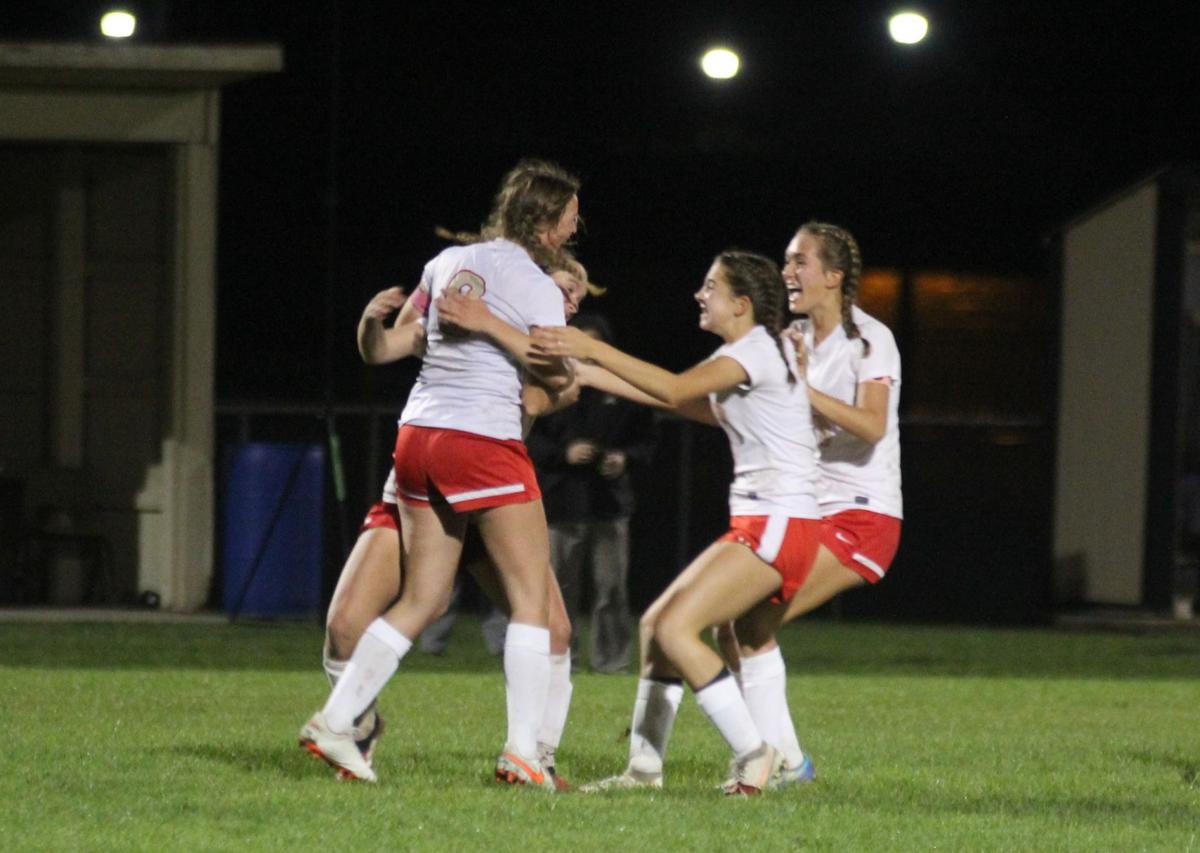 Westview’s Elaine Troyer, left, is greeted by her teammates after she hit the final penalty kick Wednesday to defeat Argos and advance to the regional championship. 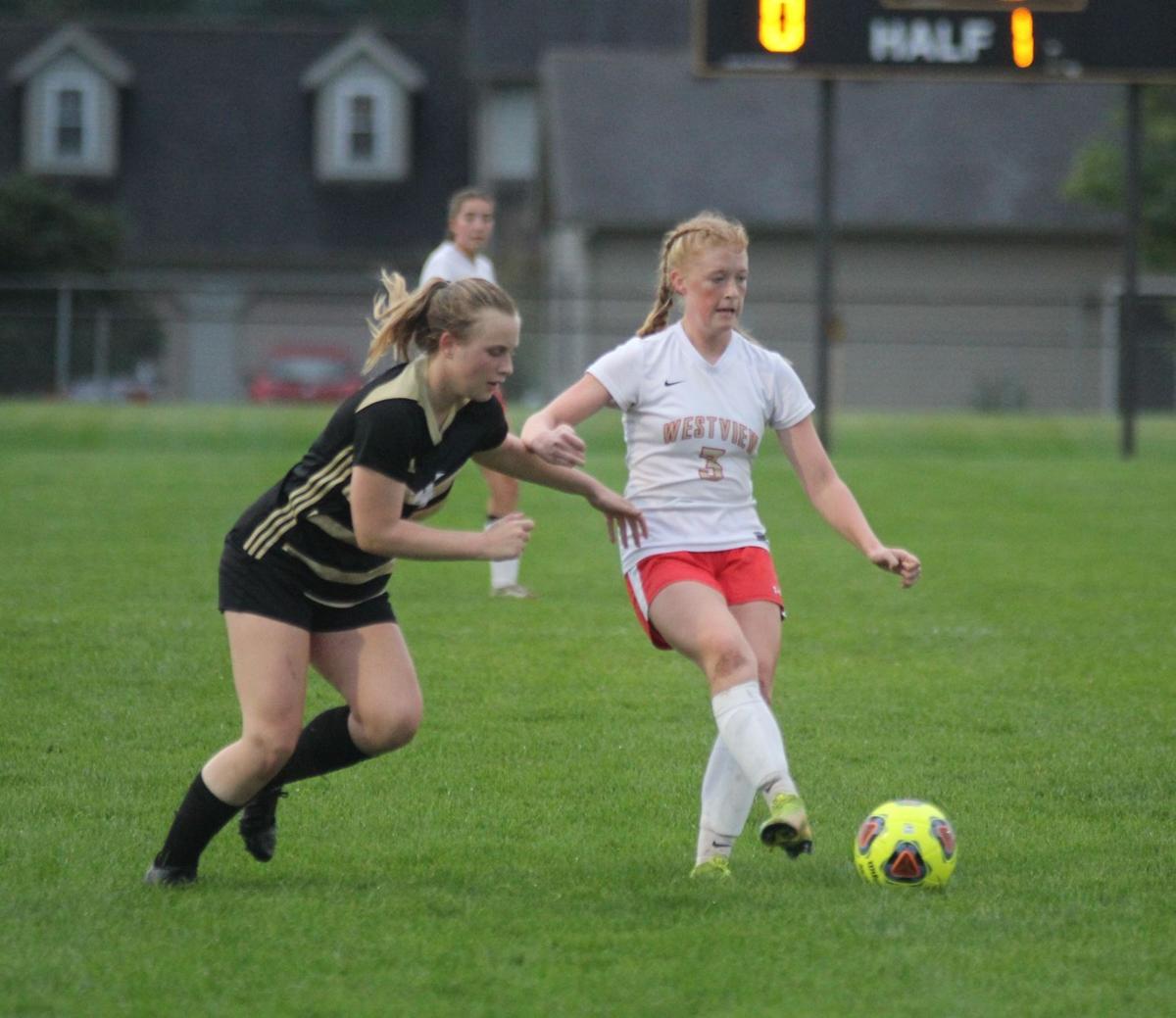 Westview's Kelsie Ward, right, takes a shot during the first half of Wednesday's Class 1A regional semifinal against Argos in Argos.

Westview’s Elaine Troyer, left, is greeted by her teammates after she hit the final penalty kick Wednesday to defeat Argos and advance to the regional championship.

Westview's Kelsie Ward, right, takes a shot during the first half of Wednesday's Class 1A regional semifinal against Argos in Argos.

ARGOS — What is going through the mind of Westview senior Elaine Troyer before she takes the kick that keeps her team’s season alive?

Troyer was the fifth and final Warrior player to take a penalty kick after Wednesday’s Class 1A regional semifinal between Argos (15-3-2) and Westview was tied 1-1 after regulation and overtime.

The Dragons missed their second kick and it was tied 4-4 as Troyer stepped up to the ball.

“I was really calm and was like, ‘I have to do this for my team.’ It was honestly just a blank mind,” Troyer said.

Troyer took a strong kick and powered it past the Argos keeper to win 5-4 in penalty kicks and send Westview (15-2-4) to the regional final on their home field Saturday in Emma.

“It’s so cool. To win at Argos is a hard thing to do, let alone do it in regionals,” Warrior coach Jesse Ward said. “They’re a solid team. We played them to a tie (earlier in the season). It could have ended it a tie if it could’ve.”

At the beginning of the week, Troyer wasn’t slotted to take the shot, but after one player didn’t want to be in the lineup if it came down to penalty kicks, the senior was subbed in.

“She hit a good ball. To hit all five I think is great,” Ward said.

Westview controlled the first half of play and had eight corner kicks to just one by the Dragons in the first 40 minutes.

There was a stretch 15 minutes into the match where the Warriors had four straight corners. Karly Miller took the first two, then Paige Riegsecker took the final two. All four ended without a shot from the Warriors.

“I felt like we controlled the first half, it was hard walking away to have that much control in the first half and not getting anything out of it,” Ward said.

With 4:45 left in the first half, Miller took another corner. This time, her shot went through the box and nearly went into the goal but wrapped around the back post.

Westview’s top goal scorer Bri Munoz was held in check for most of the night, so the Warriors had to figure out a different way to get shots off.

“They marked Bri Munoz with Lauren McGlothlin, then dropped a deep sweeper. In the first time we played them, they didn’t mark her, they dropped that deep sweeper and she got up the field a little bit. We were trying to work off Bri and use her as a decoy. I think we got some looks,” Ward said.

The Warriors were tasked with slowing down a talented goal scorer themselves with Argos’ Lillian Hines. But Westview kept her off the scoreboard all evening.

“She is very fast and good with the ball, so we had to make sure that we didn’t overstep and make sure we controlled it,” Troyer said. “That’s been one of our struggles all season is not overstepping. She pushed us and challenged us.”

The Dragons were much more aggressive on defense in the second half and limited the chances for the Warriors.

Argos was able to break the 0-0 tie midway through the second half. Emma Dunlap passed it over to Kadyn Baughman at the top of the box. Baughman took the shot and it took an unlucky bounce for Westview and into the goal.

The Warriors nearly answered a few minutes later with a free kick from Miller, but the shot sailed over the net.

Less than 10 minutes into the match, Miller was driving towards the goal when she was taken down in the box, giving Westview a penalty kick.

Munoz took the free shot and deflected it off the gloves of the Argos keeper and into the goal to tie the match, 1-1.

Westview had a chance to win it in the final 15 seconds, but a close shot from Andrea Miller was stopped.

In overtime, Westview had a few shots on goal, but they were all right to the Dragon goalie.

Warrior keeper Madison Hooley made plenty of saves down the stretch to keep the match tied.

“She’s come so far since the beginning of the season. When she’s focused and on her toes and engaged, she’s very, very good,” Ward said.

Westview hosts the regional final at Saturday at 4 p.m.

“It is an absolutely amazing feeling, especially since I’m a senior this year, so for me is just extra amazing. It just makes my year,” Troyer said. “Especially with these girls it’s an amazing feeling.”