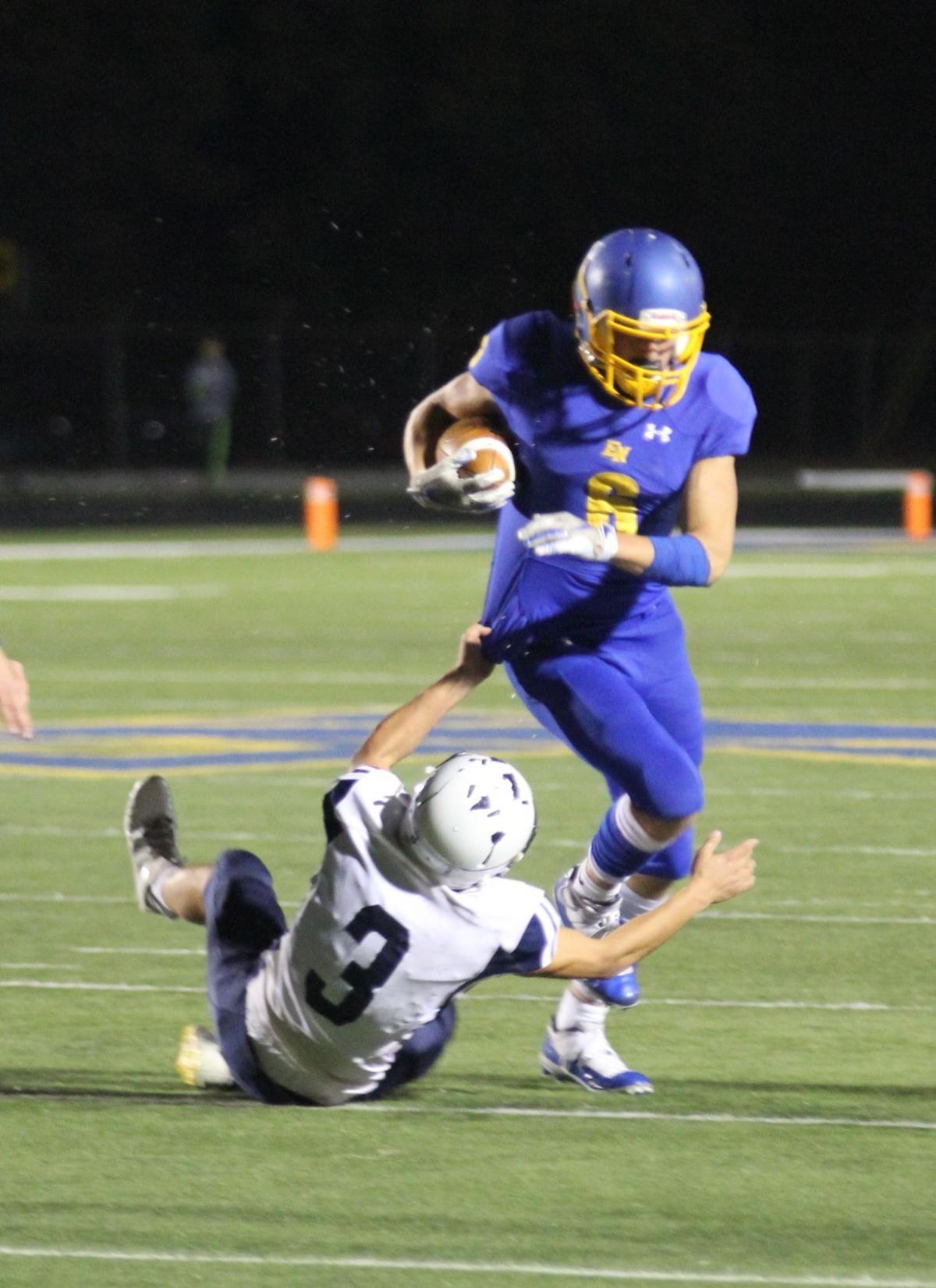 East Noble’s Rowan Zolman, right, runs over a Bellmont defender during the second quarter of Friday’s game in Kendallville. 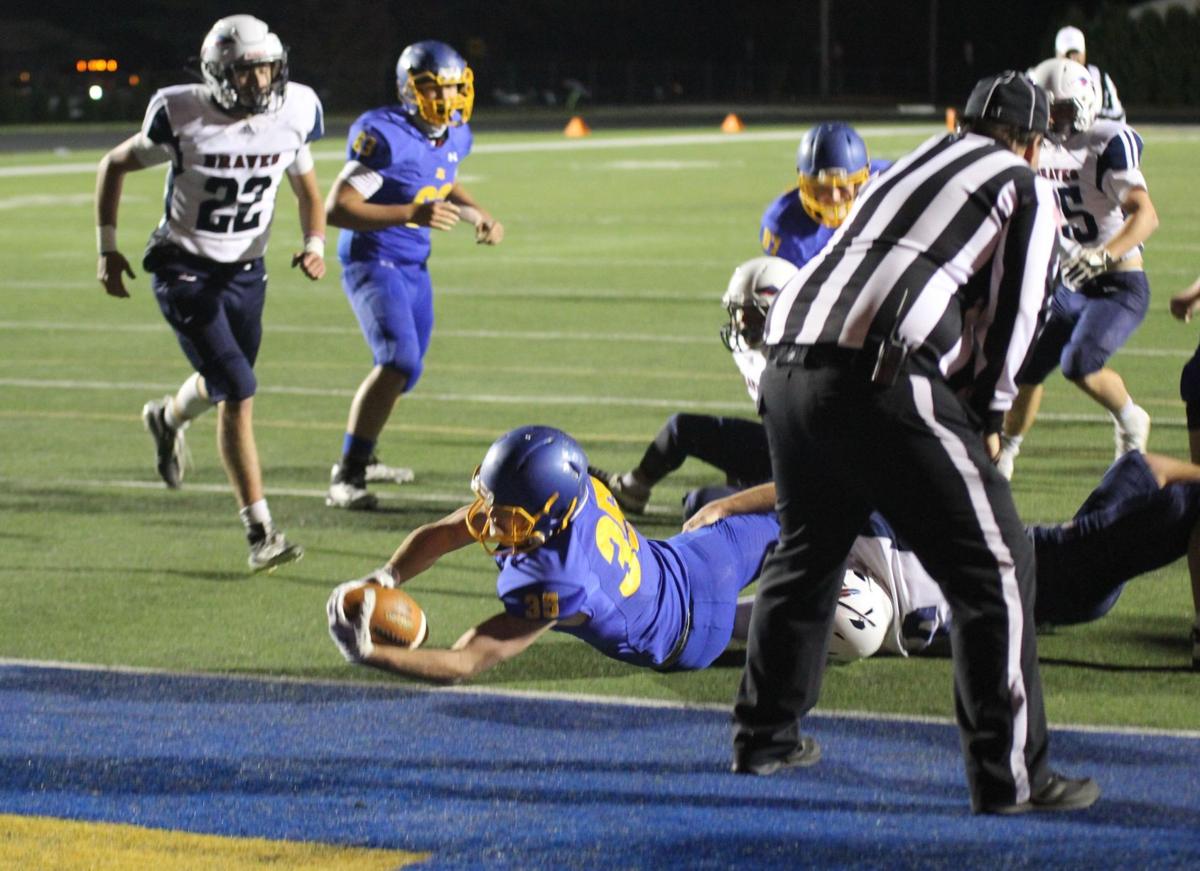 East Noble’s Justin Marcellus, bottom, stretches the ball across the goal line for a touchdown late in the second quarter against Bellmont Friday night in Kendallville.

East Noble’s Rowan Zolman, right, runs over a Bellmont defender during the second quarter of Friday’s game in Kendallville.

East Noble’s Justin Marcellus, bottom, stretches the ball across the goal line for a touchdown late in the second quarter against Bellmont Friday night in Kendallville.

KENDALLVILLE — The Knights were clearly the better team on Friday night, but it lacked a certain energy to start in their 42-0 win over Bellmont.

East Noble (6-3, 4-2 Northeast 8) looked like it would put the game away early after it scored on its opening drive in three plays.

Justin Marcellus broke off a 44-yard touchdown on the left side less than 90 seconds into the game.

After a three-and-out from the Braves (0-7, 0-7 NE8) Cole Schupbach threw an interception that bounced off the hands of Nick Munson. However, the junior made up for it on the next drive by taking a reverse handoff for six yards and a touchdown to make it 14-0 with 5:53 left in the first quarter.

Rowan Zolman quickly ended the next Bellmont drive with an interception, his fifth of the season.

The Knights moved into the red zone but had to settle for a 35-yard field goal attempt. However, the kick from Cristian Sanchez had enough leg but was wide.

East Noble was able to put a long drive together before halftime. Marcellus capped up a 15-play, 63-yard drive by stretching over the goal line on a 6-yard run to make it 21-0.

Bellmont’s biggest play of the game from its varsity squad was a 29-yard pass and catch from John Ulman to Aiden Ford late in the first quarter. The Braves only had six first down to 21 by the Knights.

“For me up in the box, we never punted. We dropped some balls to stall some drives. We very easily could have been up 35-0 at halftime if we catch some balls,” East Noble coach Luke Amstutz said. “It felt kind of unenergetic in that first half. We went in a halftime and really didn’t talk X’s and O’s. We just said, ‘Guys, you only have so many opportunities to be with each other, love each other, be excited for each other, be enthusiastic for each other.’ It was a challenge to see who was going to be our leaders in the playoffs.”

The Knights responded and quickly scored on their first two drives of the second half to make it running clock with 5:20 left in the third quarter.

Marcellus added his third touchdown when he sprinted around the left side for 34 yards into the end zone to push the lead to 28-0 less with 9:10 left in the third quarter. Marcellus finished with 155 rushing yards on 17 carries.

Then, Schupbach hit Zolman, who tipped it over a Bellmont defender then tipped it to himself in the end zone for a 36-yard touchdown. That pushed the lead to 35-0.

Ethan Nickles added a 22-yard touchdown run with 9:25 left in the fourth quarter.

If you attended Friday’s game, you wouldn’t have seen Amstutz on the sidelines like normal. Instead, he was in the press box calling plays from there.

“Long time ago when I was a coordinator, I learned being up there is a great place to see things and be in the right call and stuff like that,” Amstutz said.

Amstutz said he trusts his coaching staff and it could possibly be a permanent move for calling plays.

The Knights host Northeast 8 Conference foe Columbia City, which blew an 18-point lead and lost to Norwell 45-34 on Friday, in the first round of Class 4A Sectional 19 next Friday. Amstutz likes where his team is mentally.

“I really like where we are as a team right now. The mindset is that we’ve been here before. Everybody that’s been on the field has experienced it. This isn’t something new for us,” Amstutz said. “We just need to show up and do the things that it takes to win playoff games, which are run the ball, stop the run and don’t turn the ball over. If we do those things, then we’re going to play playoff games. Plural.

“If we revert to some of our early season mistakes, then it could be over real quick. Because we’re not necessarily that talented behemoth, but we are a pretty dang good football team.”