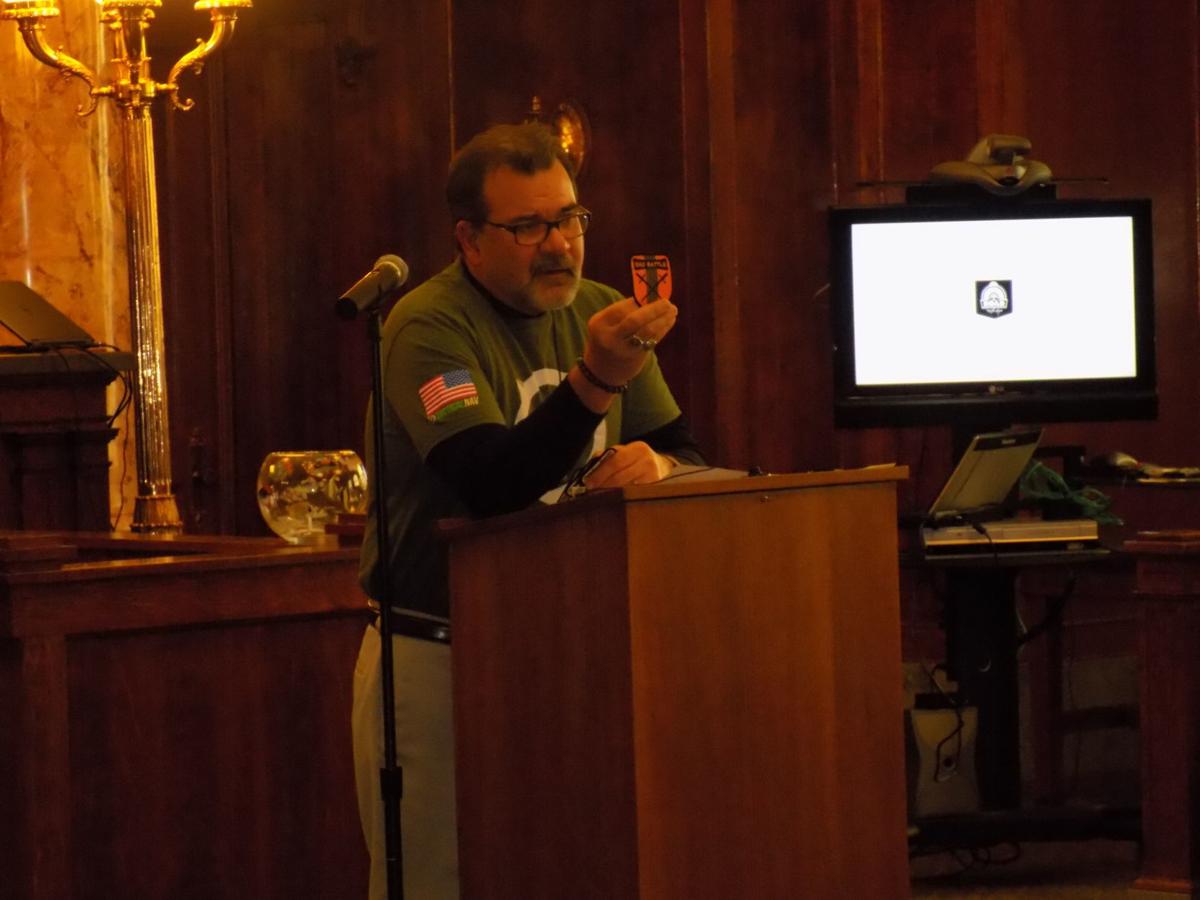 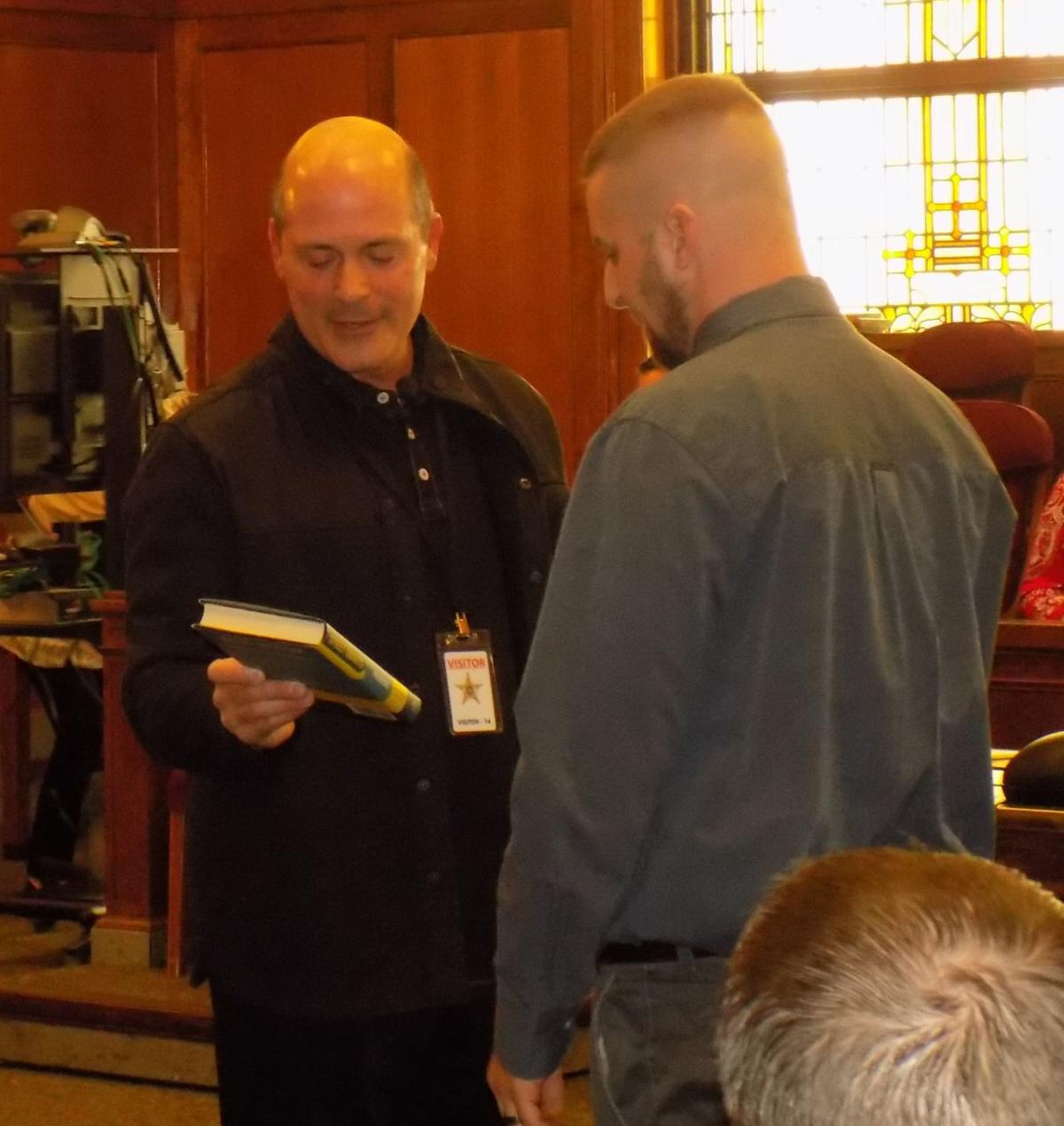 AUBURN — Restoring lives and helping others on the road to restoration was the message shared to participants of DeKalb County Veterans Treatment Court and the three men who graduated from the program Thursday.

Successful completion of the program allows eligible participants the opportunity to have their charges dismissed, be granted a reduction from a felony to a misdemeanor, or to not have a further sentence imposed. Participants agree to complete a substance-abuse and/or mental health treatment program, remain alcohol- and drug-free, meet with a veteran mentor and complete other program requirements as determined by the veterans court team.

Thursday’s graduation, held in DeKalb Circuit Court, was the court’s second graduation ceremony, bringing the total number of graduates up to five.

“What you are doing here is flat-out amazing,” Kruse said of the veterans court program.

“It is truly my honor to speak to you three heroes today,” he told the three graduates.

Kruse used an example of a restored 1908 Auburn automobile to illustrate how lives also are restored.

“God is a God of restoration,” Kruse said. “Just like a car is restored, so God restores our lives.”

Just like the 1908 Auburn was taken apart and restored, by a community, piece by piece, so it is with a person’s life, Kruse said.

“You can’t leave here and go it alone,” Kruse told the graduates. “I want you to have that crew around you.”

He asked them to commit to continuing on their “Restoration Road” journeys to bring others to restoration.

Defense attorney Adam Squiller awarded “challenge points” to the graduates that not only honor the challenge they have completed but serve as a reminder to them as they move forward in life to continue to use the skills they have learned.

Offering closing remarks, Grimm said spending time with the graduates throughout the program was “truly a pleasure.”

He described it as a “transformative process,” telling them, “You look different to me today than you did when we first met. … I’m so tremendously proud of you. … You are all very, very strong men.”

He presented each graduate with a special patch and a primitive arrow.

Grimm said arrows can be sent out for good, out of generosity, out of compassion, to protect and for many other reasons.

“These arrows represent your power and strength to influence people in the future,” Grimm said.

“You have an obligation to do good in this world and use your power and abilities to change and restore the lives of others.”

The ceremony concluded with the playing of “Taps” by trumpeter Robert E. Prinzing Jr., who played “Taps” at the Twin Towers site in New York City during the removal of the remains of the New York City fire chief.

After the ceremony, graduates Matthew, Jonathan and Ron (the last names are withheld for privacy), all U.S. Army veterans, reflected on their time in the program.

Matthew said the program had allowed him to take a look at the way he was living his life, obtain the help he needed and go on to find purpose and a new vision.

“It’s hard to describe how much it means to be given a second chance at redemption,” Jonathan said. “The empathy and compassion shown allows us to continue and move forward.”

“I’ve got a lot of respect for Judge Grimm and the whole team,” Ron agreed. “They treat everybody fair.”

The celebration wrapped up with the serving of refreshments and a special cake, provided by the Concord Masonic Lodge.