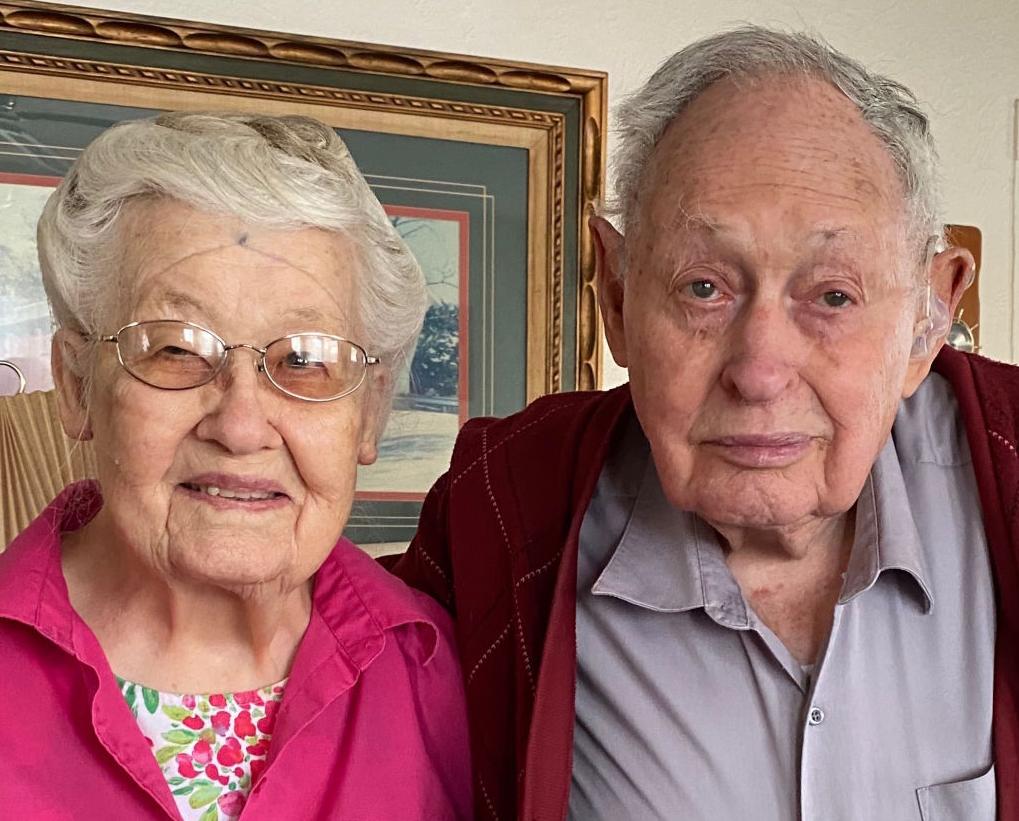 Jackie and Clarence Hull are celebrating their 75th wedding anniversary today. They live independently in their home at Spencerville. 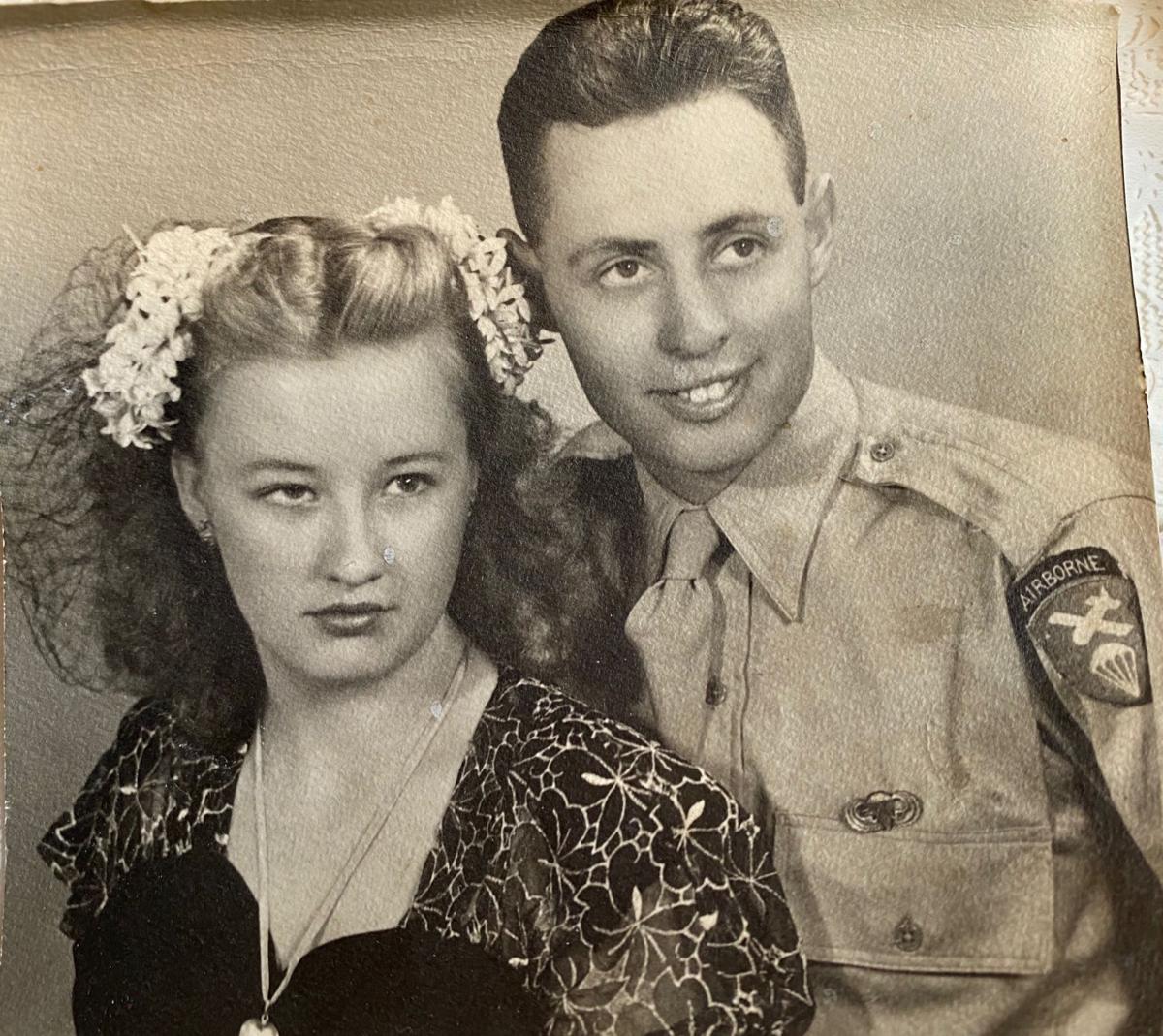 Jackie and Clarence Hull posed for this photo shortly after their wedding in 1946.

Jackie and Clarence Hull are celebrating their 75th wedding anniversary today. They live independently in their home at Spencerville.

Jackie and Clarence Hull posed for this photo shortly after their wedding in 1946.

SPENCERVILLE — Clarence and Jackie Hull of Spencerville are celebrating their 75th wedding anniversary today, but it’s a wonder they got past their first meeting during World War II.

Jackie and her roommate were visiting a swimming pool at a park in Atlanta, Georgia, in the mid-1940s. Clarence was there, too, on a weekend pass from his paratrooper training at Fort Benning, Georgia.

Jackie was staying on the edge of the pool, because she couldn’t swim. Clarence sidled over and offered to teach her.

“He’s very forward,” Jackie said last week. “I didn’t trust him. He was a northerner. I wasn’t easy to get acquainted with.”

“He wouldn’t give up on wanting to teach me, and I was wishing I could get rid of him,” Jackie said.

Jackie’s friend struck up a conversation with Clarence, and she would play a key role for the couple-to-be that afternoon and in the weeks that followed.

“I was doing everything I could in order to stay with her to get acquainted with her,” Clarence said about Jackie on that first afternoon.

Jackie’s friend and Clarence talked her into taking a canoe ride at the park. Then her friend decided to accompany Clarence to the bus station. Jackie didn’t go with them, until she found herself surrounded by a gathering of Navy men seeking her attention.

“I guess one soldier’s safer than seven sailors,” Jackie thought, and she caught up with Clarence and her girlfriend.

Before returning to his Army base, Clarence gave Jackie his addresses at Fort Benning and back home.

“If you’re afraid of me, you can write my parents in Fort Wayne, Indiana, and ask what kind of a guy I am,” he told her.

Jackie took his address to be polite. “I never thought I’d ever hear from him again,” she said.

“I wasn’t talking to him, because I wasn’t interested in that Yankee,” Jackie said.

“I just thought I was being careful,” she explained. Jackie had five sisters, and their mother “taught us how to not be pickups,” she said. Her friend, she added, “didn’t have any bringing up like I did.”

Jackie and her roommate returned to Marietta, where she worked at a defense plant, riveting airplane wings.

She soon learned that Clarence had not forgotten about her.

“He called me for two solid weeks, every night,” she said. “He kept writing me, and he kept telling me that he was going to marry me if it was the Lord’s will. I said to myself, ‘I guess it’ll have to be my will, too.’”

Giving fate a little help, Jackie’s roommate penned a letter to Clarence, now stationed in Europe, and signed Jackie’s name. The letter only confused the relationship. Clarence wrote Jackie with questions. She wrote back, but her letter took a roundabout path.

One day, she said, “He found a muddy, wet letter lying on the ground in the barracks. He picked it up, and lo and behold, it was to him, and it was from me.”

Jackie’s next letter cleared up the misunderstandings caused by her roommate’s message. Then she didn’t hear from Clarence for a month, during his 30-day voyage back to the States.

When he reached Fort Wayne, Clarence quickly fired off a letter to Jackie. He told her, “I’m in Indiana, and I’m coming down to see you.”

Her mother saw Jackie rip up a letter from Clarence and asked if she could read it. She then told Jackie, whom she called by her given name, Jetteree, “There might be something to that guy. There’s not many people that think about God in their plans.”

“I never forgot that, and I looked at Clarence a little different. I wondered if God’s having anything to do with this,” Jackie recalled.

“I told him I would not wear them until I make up my mind,” Jackie said.

Jackie’s father took a liking to Clarence, who helped him cut wood, and he allowed Clarence to stay in the family’s barn.

“We got married within two weeks after he got down there,” Jackie said. Clarence and Jackie made a trip to the county seat to get a marriage license.

When Jackie’s mother expressed concern that their daughter was about to wed Clarence, her father reacted calmly, saying, “She could do worse than that.”

Soon after, they moved to Fort Wayne, where Clarence returned to his pre-war job at General Electric.

Clarence worked for a variety of employers through the years, topped by 17 years with GE. For a span of four years, the couple teamed up to operate the telephone company for Wawaka — Jackie using her training as an operator, with Clarence as the lineman.

They took root in Spencerville in 1958, settling in one of the town’s oldest homes on the south edge of the village.

“They were like Georgia folks,” open and friendly, Jackie said about her Spencerville neighbors.

Clarence started a machine shop in 1981 during a time when he was laid off. The Hulls’ sons, Clifford and Jack, now operate the long-running, successful business.

Both from large families, the Hulls had four children of their own.

Clarence will turn 100 years old on May 6. “There ain’t nothing he wouldn’t do for me,” said Jackie, who is nearing her 94th birthday on March 4. Clarence struggles with his hearing, and Jackie with her vision, so they help each other, still living independently in their longtime home.

Shortly before her wedding, Jackie recalls, she sought advice on how to tell if a marriage would last. She recalls thinking, “I don’t want a divorce, and if I ever get married, it’s going to be final.”

Seventy-five years later, she says, “It’s because of God that has held us together. … You don’t need marriage counselors if you are living according to the Scriptures.”