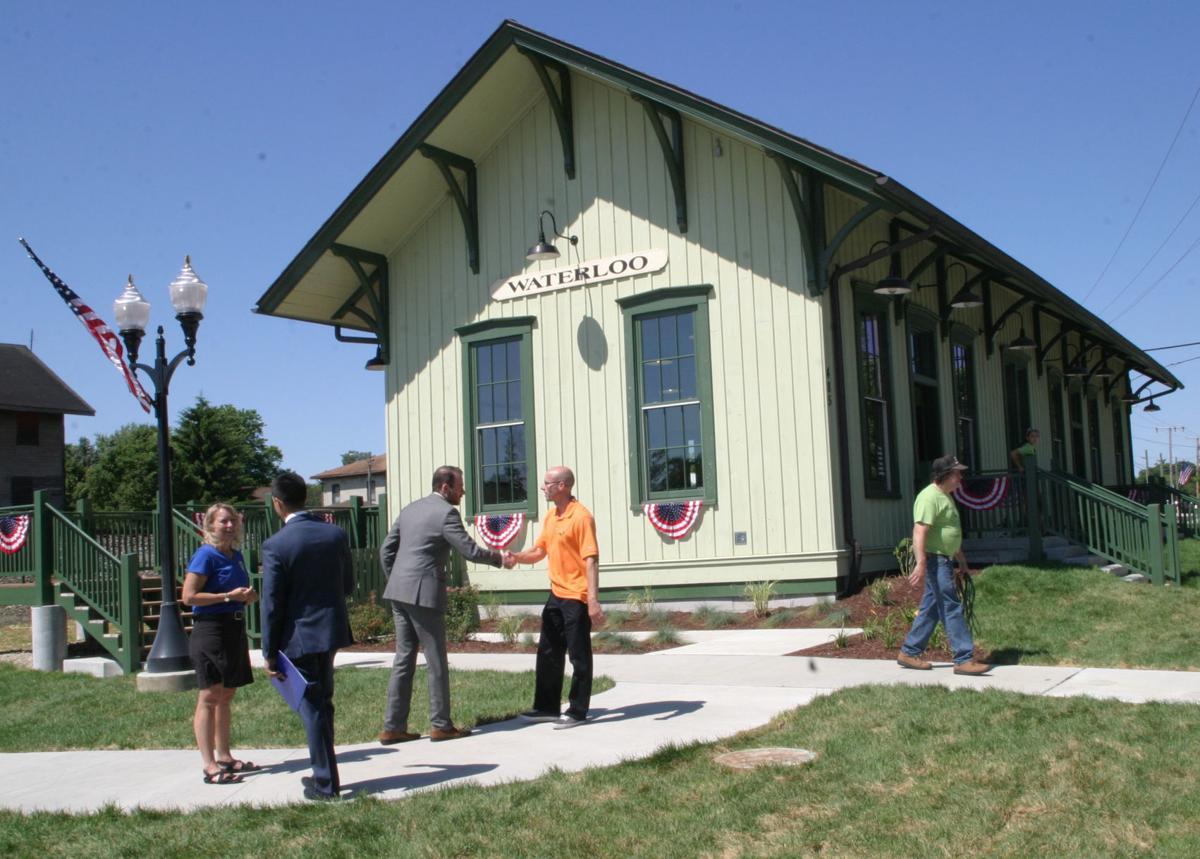 In June 2016, Waterloo Town Manager Tena Woenker, in blue at left, and Town Council President David Bolton, in orange shirt, chat with visiting guests after a ribbon-cutting ceremony for the town’s restored 1883 railroad depot. Since opening, it has been used as an Amtrak passenger station. On her next-to-last day as town manager for Waterloo, Tena Woenker works in her office at Town Hall.

In June 2016, Waterloo Town Manager Tena Woenker, in blue at left, and Town Council President David Bolton, in orange shirt, chat with visiting guests after a ribbon-cutting ceremony for the town’s restored 1883 railroad depot. Since opening, it has been used as an Amtrak passenger station.

On her next-to-last day as town manager for Waterloo, Tena Woenker works in her office at Town Hall.

WATERLOO — Tena Woenker left Waterloo for a new job Friday after 5 1/2 years of changing the landscape and attitudes.

“This is a good community, and they should be proud of it,” Woenker said. “I think people have hope again.”

Woenker came to Waterloo as its new town manager in March 2014. She now will take on the same role for the town of Albion, one county to the west.

She helped bring Waterloo $3.6 million in grants that paid for several significant improvements.

“That’s the first thing I did on the first day,” she said. Using a $1.8 million grant from the Federal Railroad Administration, the town restored its 19th century depot for use as an Amtrak passenger station.

“That was a really exciting project for me. I had never worked a federal grant that big before,” Woenker said.

The town then obtained a $350,000 grant to tear down nine blighted homes, five of which had been damaged by methamphetamine labs and four that were “terribly dilapidated,” Woenker said.

“Every neighborhood saw some impact of things getting cleaned up. I think that was really pivotal to setting the tone of what my goals were, and that was to help this community find its pride again and take care of itself,” Woenker said.

“If you live next to a vacant home, eventually, you quit wanting to care about yours. … It’s demoralizing,” she said. With momentum from the blight project, “People have really worked hard in the last five years at cleaning up their yards. We’ve seen a lot of investment, new homes built.”

In the past year, donors helped Waterloo earn a $50,000 matching grant for the new Veterans Park on the town’s south side. A sledding hill and pond have been created, with work set to resume in the spring and be finished by April 30.

Earlier, Waterloo saw an army of volunteers rebuild a burned playset at Thomson Park in 2015 and created Pankop Park on the town’s north side. A pending grant will pay to extend the Auburn-Waterloo Trail north toward Walnut Street.

“The park board has taken huge leaps in moving Waterloo forward when it comes to recreation,” Woenker said.

On the recreation front, Waterloo has staged a late-night party for past three years to watch the Canadian Pacific Holiday Train roll through town with its colorful lights.

After she departs, Woenker will continue consulting with Waterloo on its project to redevelop a block-long property on the west side of its business district. She’s been working with it for 3 1/2 years.

“It’s been a really exciting project. I think when we finish it, it will change Waterloo forever,” Woenker said. “I think it’s transformative.”

At the north edge of downtown, Casey’s General Store opened this year with an investment of more than $2 million. Combining Casey’s with other growth, the town’s assessed property value has increased by 15% in the last five years.

“That’s helping the town’s budget. … We can do more,” Woenker said.

Waterloo expanded its boundaries by annexing commercial land along U.S. 6 west of Interstate 69 and extending water service to the site. A proposed new truck stop at the site has been stalled by problems involved its entrance.

“I do believe there will be growth out there” eventually, Woenker said.

In other developments, town government offices moved to a new Town Hall at 280 S. Wayne St., grants totaling $500,000 paid for new sidewalks, and another $500,000 grant paid for sewer separation.

A nearly complete turnover of town employees “gave us an chance to build a team” from the new staff members, Woenker said.

“We are a team here. We cross-train. We have each others’ backs,” she said. The town promotes a philosophy that “the residents are our customers.”

Woenker found encouragement from the residents’ participation in public forums on topics ranging from the future of downtown and parks to solving a problem with feral cats. Some meetings attracted 60 or more people.

“You won’t even get that in Fort Wayne when you have a public meeting,” Woenker said about the numbers at public meetings. “I feel like the engagement of the citizens — I’ve seen that grow … and they really do care.”