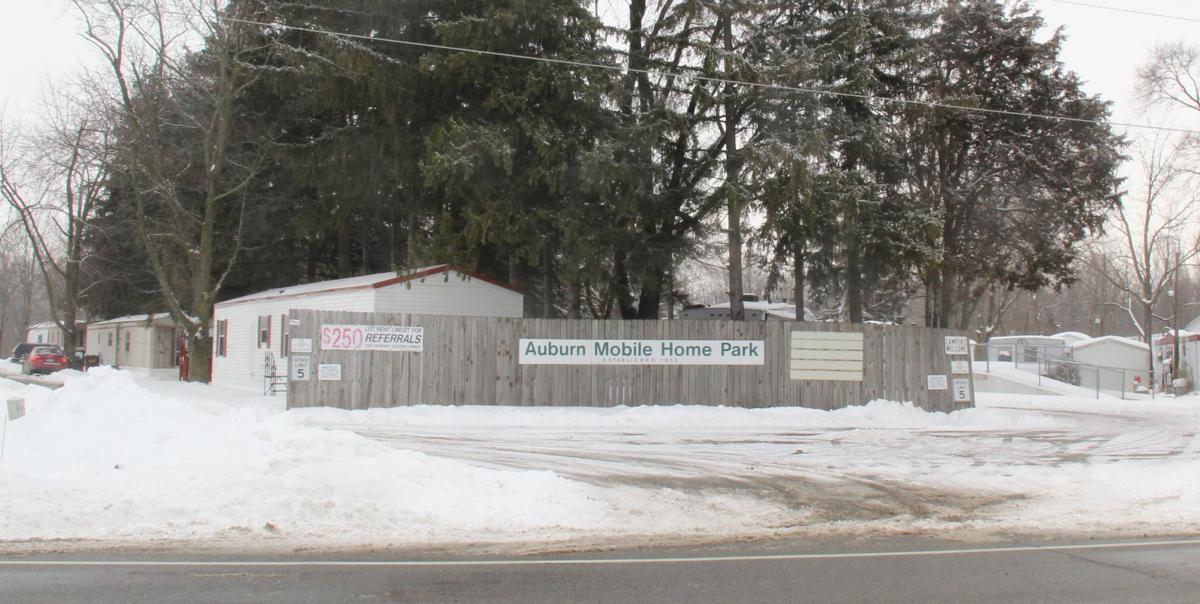 AUBURN — The city of Auburn soon will become the owner of the Auburn Mobile Home Park at the city’s south edge.

The Dickman family, heirs of the late Burt Dickman, a former mayor of Auburn, is donating the 5-acre property to the city.

The city needs the front of the property along South Main Street for a proposed overpass of the CSX railroad tracks just to the north of the site.

In revealing the donation at an Auburn Common Council meeting Tuesday night in City Hall, Mayor Mike Ley said the city is “very, very thankful” for the gift. The Dickman family approached him with an offer to give the property to the city, he said.

The rest of the site will be returned to a natural state, and it could be used for future expansion of the city’s water pollution control plant next door, the mayor said.

The park’s estimated 28 residents will be given three years to relocate, Ley said. Until then, the city will hire a company to manage the park. It also will offer help in relocating them.

“This ownership’s going to transfer to us, tenants and all,” Ley said. “ We are fully prepared to become landlords and manage this park.”

Income from rental payments will go toward helping residents relocate and restoring the property to a natural state, the mayor said. Eventually, the city will remove all improvements and return the site to grass “until we deem it’s necessary to be used some other way.”

Ley added, “You always take a good look at acquiring real estate that’s adjacent to you if the opportunity presents itself. … Because you may only have that chance once, ever.”

Closing on the land transaction is expected to take place March 8, the mayor said.

Auburn Mobile Home Park was the first development of Burt and Elsie Dickman’s business enterprises in Auburn, opening in 1955. The Dickmans later developed the much larger West Edge Park manufacturing housing neighborhood and West Edge Mall on the city’s west side. Ley said Tuesday that the family now is in the process of selling West Edge Park.

The mayor said the land donation is the family’s way of thanking the community for doing business for so many years.

If the railroad overpass is built, the donated land will be needed for construction of a new entrance to the water pollution control plant, which is directly north of the mobile home park.

Two weeks ago, the council heard a presentation from USI Consultants engineers about the potential for a railroad overpass on South Wayne Street. The study estimate the cost as at least $9 million.

Tuesday night, at the suggestion of Councilman Jim Finchum, the council amended an ordinance accepting the Dickman property donation. The change makes it clear that the council is not making a firm commitment to build an overpass as a condition of the gift.

“I’m all in favor of acquiring this real estate, and I’m all in favor of the railroad overpass, provided we get state funding. … If we try to foot the whole bill ourselves, I’m not sure I’m comfortable with the $9 million price tag,” Finchum said.

“This does nothing but benefit moving forward with applying for state funds, so this is a great thing to do,” Finchum said after the council voted in favor of the ordinance to accept the property.

‘It would make my dad smile’

AUBURN — The late Mayor Burt Dickman would be pleased by the idea of a railroad overpass for Auburn, his daughter said Wednesday.

“For years, my dad, when he was living, envisioned either an overpass or and underpass” where Auburn’s Wayne Street intersects with the CSX railroad, Susan Reger of Auburn said. “He wanted to make it easier for the citizens of Auburn to go down that road and not be stopped by a train.”

She added, “When we found out that that the city was actually planning to do it, the timing was right” to donate the Dickman family’s mobile home park in south Auburn to the city. The front portion of the 5-acre property would be needed for the proposed overpass.

“It would make my dad smile,” Reger said about the donation.

The same goes for her mother, Elsie Dickman, who was married to Mr. Dickman from 1951 until his death in December 2018.

“She just glowed … that she could help in that way,” Reger said about her mother’s reaction to the land donation.

Reger said for her father, an overpass was “a dream that he was never able to check off his list, so we’re doing it for him.”