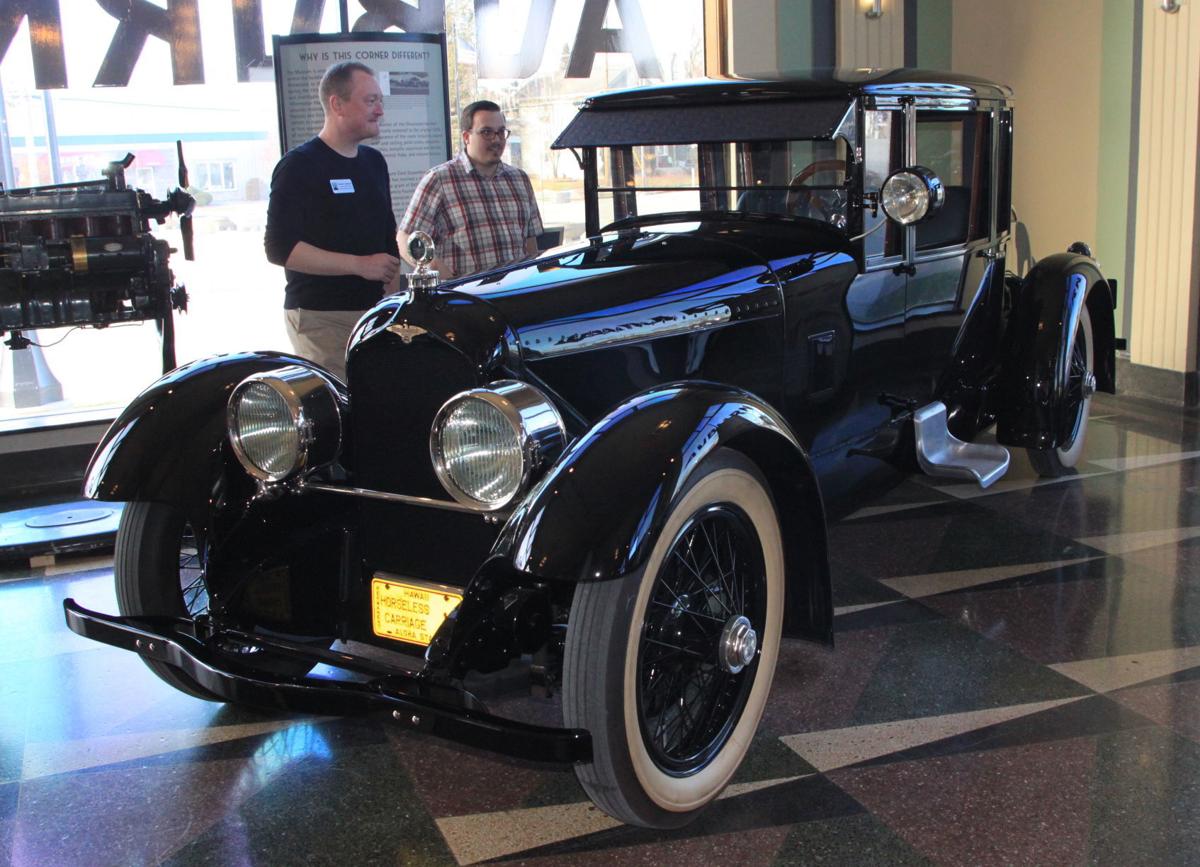 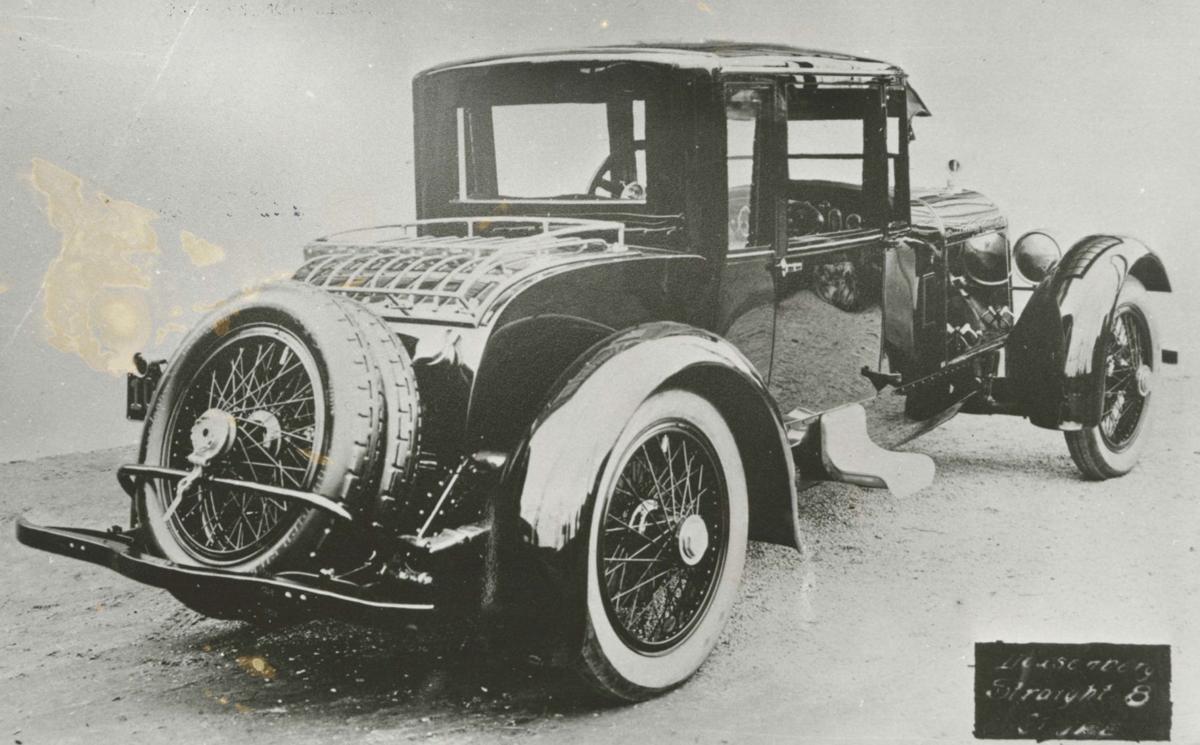 This is one of only four original photos of the 1921 Duesenberg A Coupe that were available to restoration experts. None showed the front of the car. 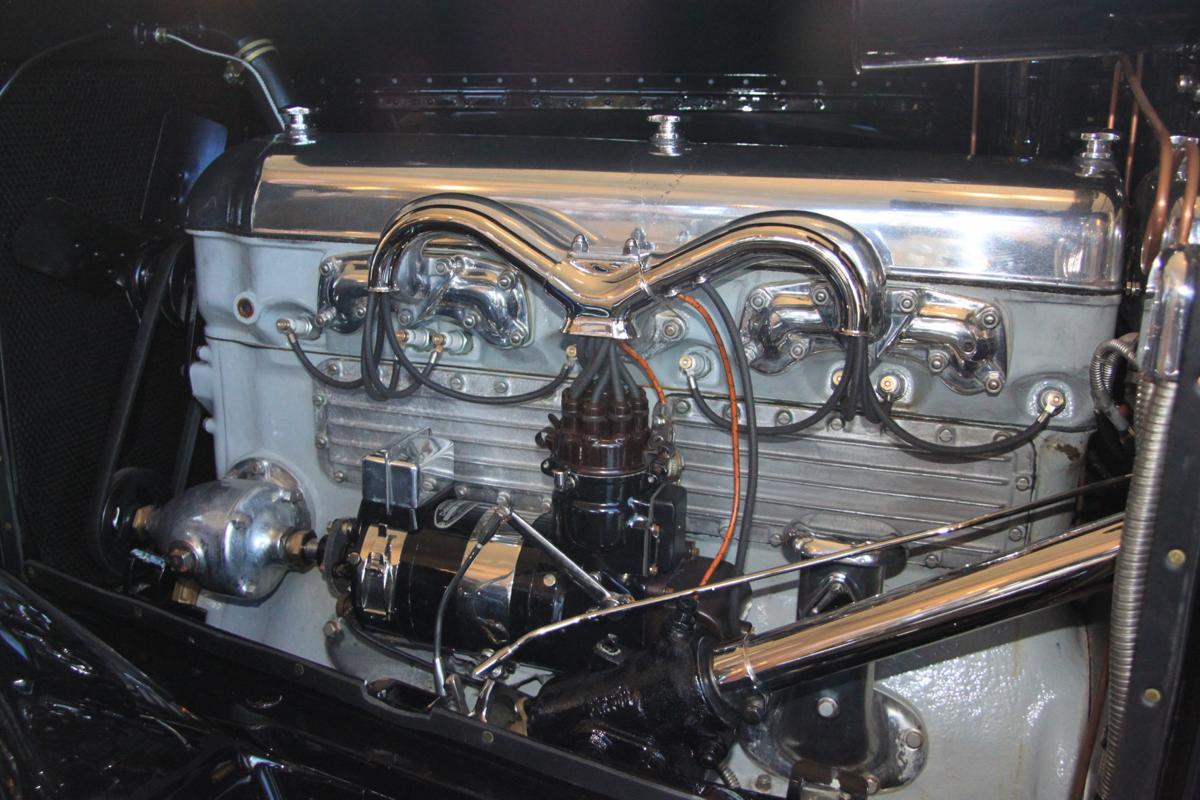 The engine of this 1921 Model A Duesenberg is the first sold to the public with a racing-inspired overhead-cam, straight-eight-cylinder design. 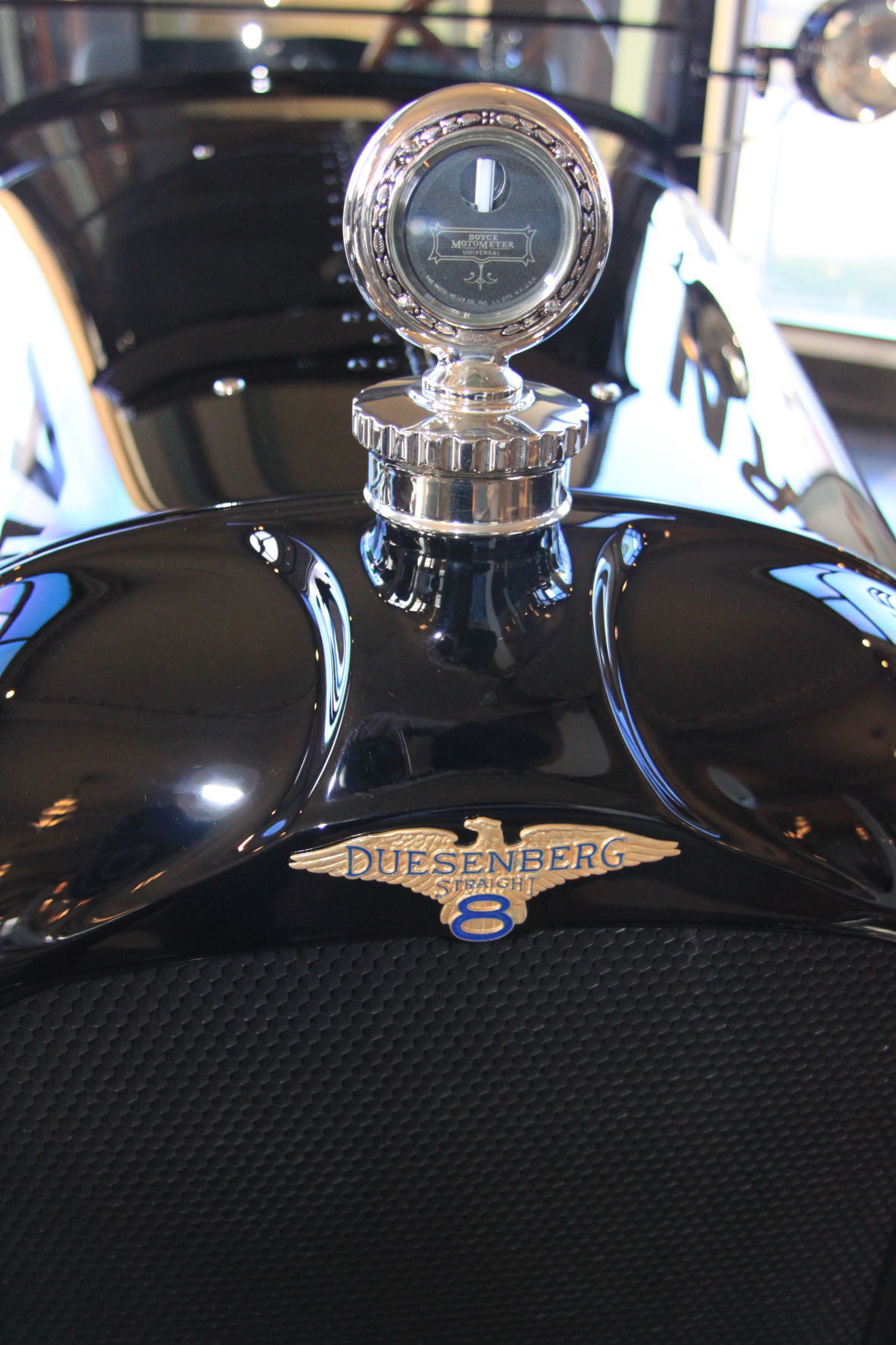 A 1921 Model A Duesenberg, the first sold to the public, wears its name on its radiator badge. 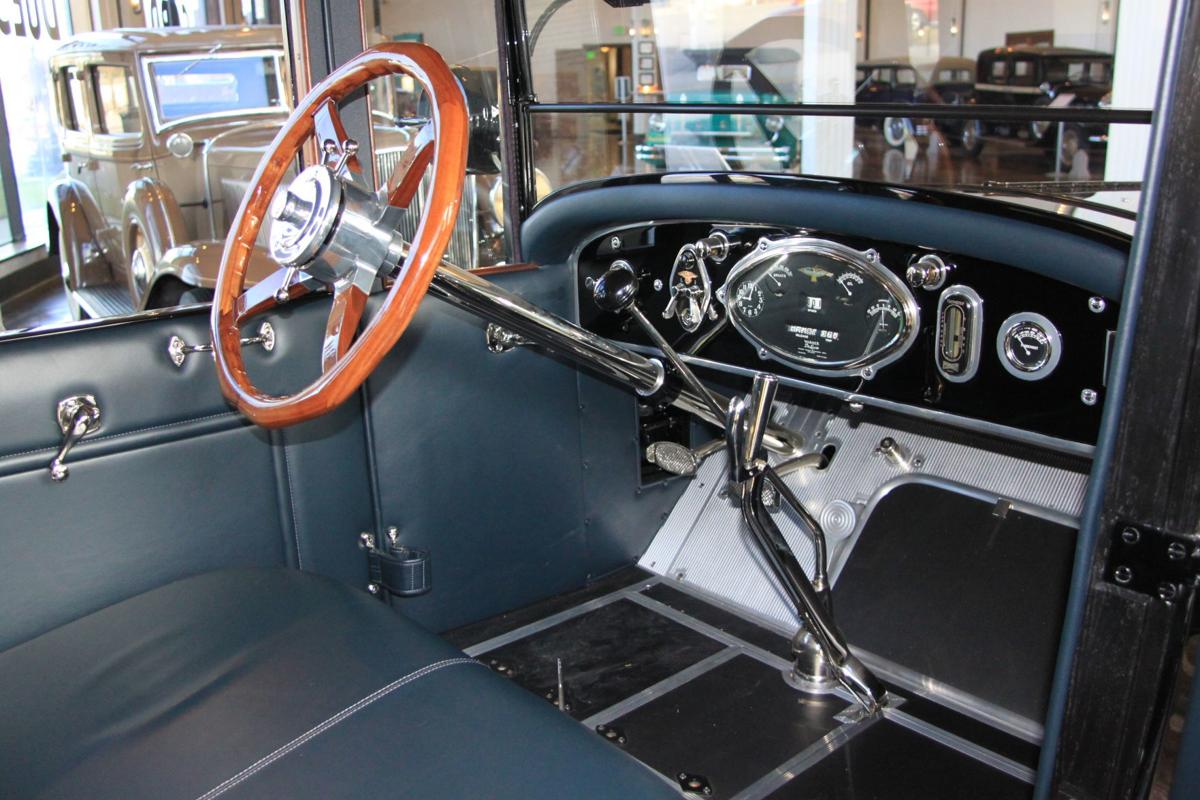 The interior of the first Duesenberg auto sold to the public, a 1921 Model A, featured an oversize passenger compartment for its 7-foot-tall owner.

This is one of only four original photos of the 1921 Duesenberg A Coupe that were available to restoration experts. None showed the front of the car.

The engine of this 1921 Model A Duesenberg is the first sold to the public with a racing-inspired overhead-cam, straight-eight-cylinder design.

A 1921 Model A Duesenberg, the first sold to the public, wears its name on its radiator badge.

The interior of the first Duesenberg auto sold to the public, a 1921 Model A, featured an oversize passenger compartment for its 7-foot-tall owner.

AUBURN — Christmas came five days late at the Auburn Cord Duesenberg Automobile Museum, but it was worth the wait.

On Dec. 30, the museum received one of its best gifts ever — the very first Duesenberg passenger car sold to the public, a 1921 Duesenberg Model A Coupe.

“This is one of the most significant donations in this museum’s 45-year history,” said Brandon Anderson, the museum’s executive director.

The gleaming, all-black beauty features an oversized passenger compartment designed for its original owner, 7-foot-tall Samuel Northrup Castle of Hawaii, a descendant of the founder of a sugar plantation business that eventually became Dole Food Co.

The car remained with the Castle family for nearly a century until they donated it to the museum, after first giving it a three-year, 10,000-hour restoration in California.

A 2013 New York Times video about the car mentioned speculation that it might be worth more than $50 million. A companion story in the Times described it as “the first privately purchased car from what many consider America’s most historically significant automotive brand.”

Already famous for their success in racing, the Duesenberg brothers, Fred and August, branched into passenger car production by setting up a factory in Indianapolis. Castle became their first customer when he ordered a car in 1919, but it was not delivered until two years later.

For his patience, Castle became owner of the first car sold to the public with the race-inspired innovations of four-wheel hydraulic brakes and an overhead-cam, straight-eight-cylinder engine. The Bender Body Co. of Cleveland produced its two-seat passenger coach, stretched to accommodate the towering driver.

As years passed, the Duesenberg eventually became a work truck, After the original owner’s death in the late 1950s, it passed down to his favorite nephew in California, and then to the nephew’s son, James Christian Castle Jr., and his wife, CyrAnn Castle.

Anderson said CyrAnn Castle discovered the vehicle in a barn, surrounded by horses and farm animals.

“She saw one of the horses eating the leather out of it,” he said. When she and her husband became the owners, they took it to their favorite restoration shop in 2010 to be restored to its original condition.

Turning to the Auburn museum for research assistance, restorers relied on the only four remaining photographs of the car in its original form. In rebuilding its aluminum body and ash wood frame, “They saved everything that could be saved, that wasn’t rotted out,” Anderson said.

Emerging from its restoration in 2013, the car won the Classic Cars of America Trophy at the Pebble Beach Concours d’Elegance, Best of Show at the Niello Concours at Serrano, and the Automotive Heritage Award at the Amelia Island Concours d’Elegance.

The Castles eventually made a decision about the car’s next century of life.

“They realized that this vehicle is so incredibly important that the public should be able to see it,” Anderson said. “They did look at other museums. They actually thought about the Smithsonian … this is pure American history.

“They knew that this was the right home for the vehicle, so I worked with the Castle family, and also others who are friends of the family, to secure the donation coming here,” Anderson said.

“It was critical to the Castle family that their cherished, 100-year family heirloom be cared for throughout the next 100-plus years, and the ACD Museum is the perfect place to do so,” McCall said.

McCall will host “The Road to Provenance,” a television series focusing on collecting that will make its debut this fall on the History Channel. Anderson said the show is expected to devote a full episode to the Castle Duesenberg.

“That the Castle Family chose the ACD Museum to preserve and display their family Duesenberg is a message to all owners of significant classic cars,” Killorin said. “Museums can provide an enduring succession plan that respects the donating party’s passion and devotion to their cherished family vehicle.”

“Chris and I just want to say we are so glad she is where she is for the whole world to see the ‘Lady from Hawaii,’” CyrAnn Castle said through a news release from the museum.

“She calls this Miss Duesy,” Anderson said about CyrAnn Castle’s nickname for the car. “She has a personal connection with it, and she has stated that she knew this is the perfect home for it.”

He added, “We promised the family that we would continue to put this in the public eye, not just within the walls of the museum, but also to take it out to shows and events for additional people to be able to see it.”

The museum will begin fulfilling that pledge on Feb. 9, when it will display the Castle Duesenberg in the Concours d’Elegance at Boca Raton, Florida, which is celebrating the 100th anniversary of Duesenbergs.

“The organizers of the Boca concours have been trying to get this vehicle there for years,” Anderson said.

The museum also will exhibit its one-of-a-kind 1927 Duesenberg Model X Speedster and its restored and running 1926 Duesenberg Model A Chassis, donated last year, at Boca Raton. Anderson said the concours will give a big boost to the museum’s reputation.

In preparation for the Boca Raton show, Anderson took the Castle Duesenberg for a spin through the streets of Auburn on Monday.

“It drives like a dream. It’s like a brand-new car. It’s incredible,” Anderson said. Although he did not test its limits, the 260-cubic-inch, 90-horsepower engine originally was capable of more than 100 mph.

When it returns from Florida, the car will go on permanent exhibit in the museum’s main showroom. A display will feature the histories of the Castle family, the car’s restoration process and the Duesenberg brothers.

“This 1921 Duesenberg Model A with its single-family history and unique, one-off body style is an important donation to the museum, and its story will be celebrated with all visitors,” said Sam Grate, curator of the museum.