An aerial photo shows the Auburn Cord Duesenberg Automobile Museum at right and the National Auto and Truck Museum behind it, at left. See a photo of the site in the 1930s at kpcnews.com/thestar. 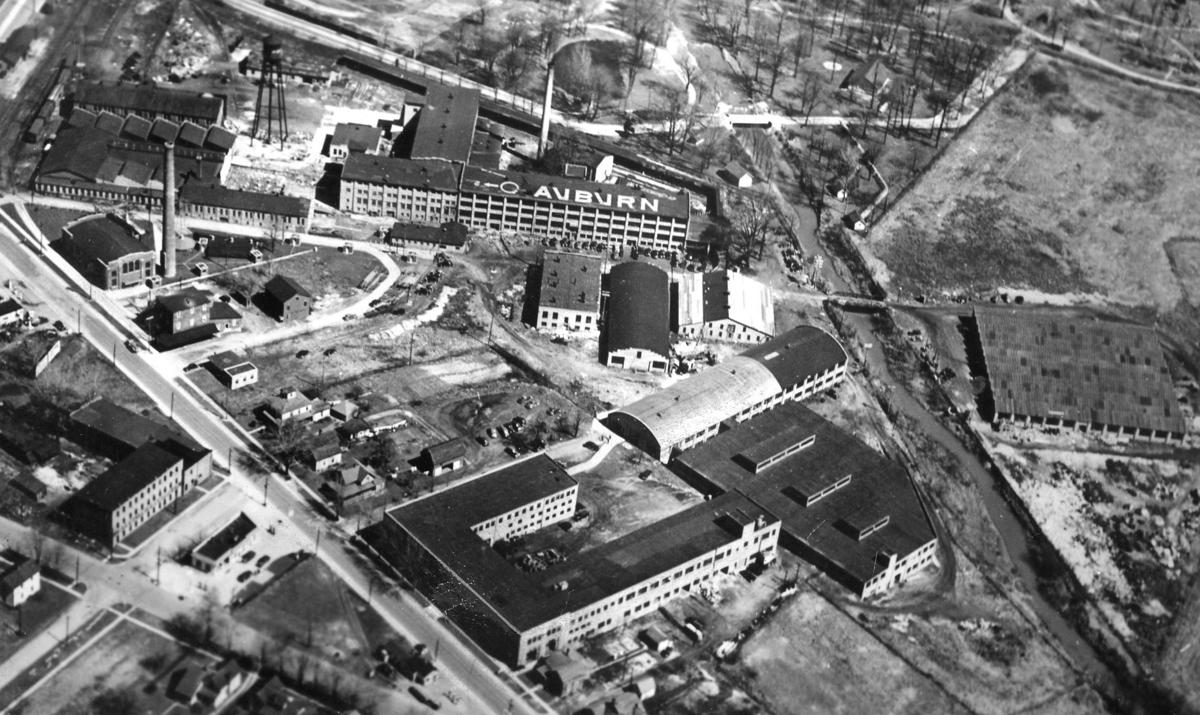 An aerial photo shows the Auburn Automobile Co. in the 1930s. The J-shaped building in the foreground today houses the Auburn Cord Duesenberg Automobile Museum. Immediately to its right are two buildings that now make up the National Auto & Truck Museum.

Artwork such as this illustration will promote Auburn’s two historic automobile museums as a combined campus experience.

An aerial photo shows the Auburn Cord Duesenberg Automobile Museum at right and the National Auto and Truck Museum behind it, at left. See a photo of the site in the 1930s at kpcnews.com/thestar.

An aerial photo shows the Auburn Automobile Co. in the 1930s. The J-shaped building in the foreground today houses the Auburn Cord Duesenberg Automobile Museum. Immediately to its right are two buildings that now make up the National Auto & Truck Museum.

Artwork such as this illustration will promote Auburn’s two historic automobile museums as a combined campus experience.

Now they are joining to create “The Auburn Automobile Experience,” encouraging visitors to explore both museums.

As a start, on Nov. 1 they began selling “campus tickets” that save money for people who visit both sites and give them two days for touring them.

The Auburn Cord Duesenberg Automobile Museum sold 367 campus tickets from Nov. 1 to Dec. 12. On one recent day, every visitor bought a $20 campus ticket.

“They’re not rushed to go through both buildings at a quicker pace, because the pass is good for two days,” said Dave Yarde, executive director of NATMUS. “It’s going really well.”’

More cooperative efforts will be coming in 2020, as the museums follow recommendations of a study by Lord Cultural Resources of Canada.

“We have this incredible story to tell, and we have to tell it together,” Anderson said.

Opened in 1930, the ACDA Museum’s building housed the corporate headquarters, design center and showroom of the Auburn Automobile Co., which built some of the classic era’s greatest cars —Auburns, Cords and Duesenbergs. It became the home of a museum in 1974, and its exhibits focus on cars from the 1890s through 1940.

Dating back to the 1920s, the NATMUS buildings housed an assembly line and the parts and service department of Auburn Automobile Co. The museum was founded in 1989 and features cars from post-World War II to the muscle-car era and the present, while also showing some classics built in Auburn.

Between the two museums, “We literally have something for everybody,” Yarde said.

“We have two incredible resources right here, on the same property, that are part of the same National Historic Landmarks listing,” Anderson said. Together, he said, the museums can tell “a very dynamic story that is history, engineering, innovation, design, technology, based around the automobile.”

To encourage cooperation, The James Foundation of Auburn gave the museums a grant to hire a consultant. A six-member committee, with three leaders from each museum, chose Lord Cultural Resources from five applicants. The study took place throughout 2019, conducting dozens of interviews with museum officials and community members.

The consultants’ report suggests ways both museums can grow and how they can work together for mutual benefit, Anderson said.

The recommendations include “a lot of things that, at the end of the day, just make a lot of sense. It’s both of us working together and having that synergy,” Anderson said.

Plans call for sharing of marketing materials and replacing billboards to promote the total museum campus experience; joint purchasing of supplies; and working on an interpretive trail that tells the story of the Auburn Automobile Co.

The ACDA Museum is using its digital sign to promote NATMUS events, as well as its own. Video monitors mounted in both museums highlight the new ticket options and attractions of the entire campus.

“We’re looking at joint behind-the-scenes tours,” Anderson said. Among the possibilities, few visitors have ever seen the basement of the ACDA Museum.

Wayfinding signs could be improved to explain the entire campus.

“We want to make sure they see both museums and want to be at both museums,” Anderson said.

The museums remain separate organizations, but joint membership is a potential option, he added.

“What is paramount is the visitor experience,” Anderson said. To stay relevant in the future, the museums need new ways to engage and involve their visitors, he said.

“The biggest draw is that we’re making a really unique experience for visitors,” Yarde said. Toward that goal, volunteers are working at NATMUS to create a replica of a 1930s Auburn Automobile dealership inside the museum.

Anderson said that together, the museums can “create something that’s engaging, meaningful and memorable.”

He said, “It’s a very exciting time … for the museums and for Auburn and the community.”