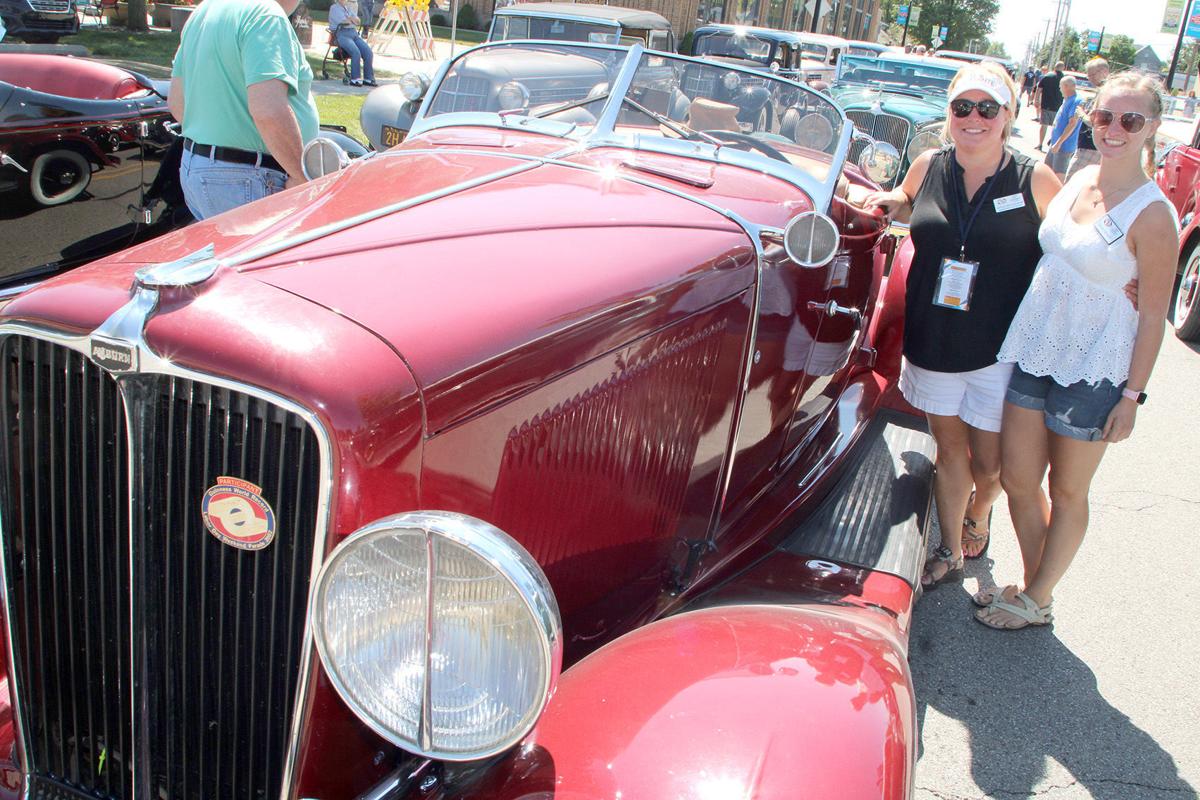 Gretchen Frownfelter, of Fishers, was awarded the Bob Butler Hoosier Tour Award during this year’s Auburn Cord Duesenberg Festival Kick-Off luncheon. Thursday’s lunch was sponsored by the Early Ford V-8 Foundation Museum. She is pictured with her daughter, Sage Grimpe standing next to the families 1931 Auburn Speedster 898. 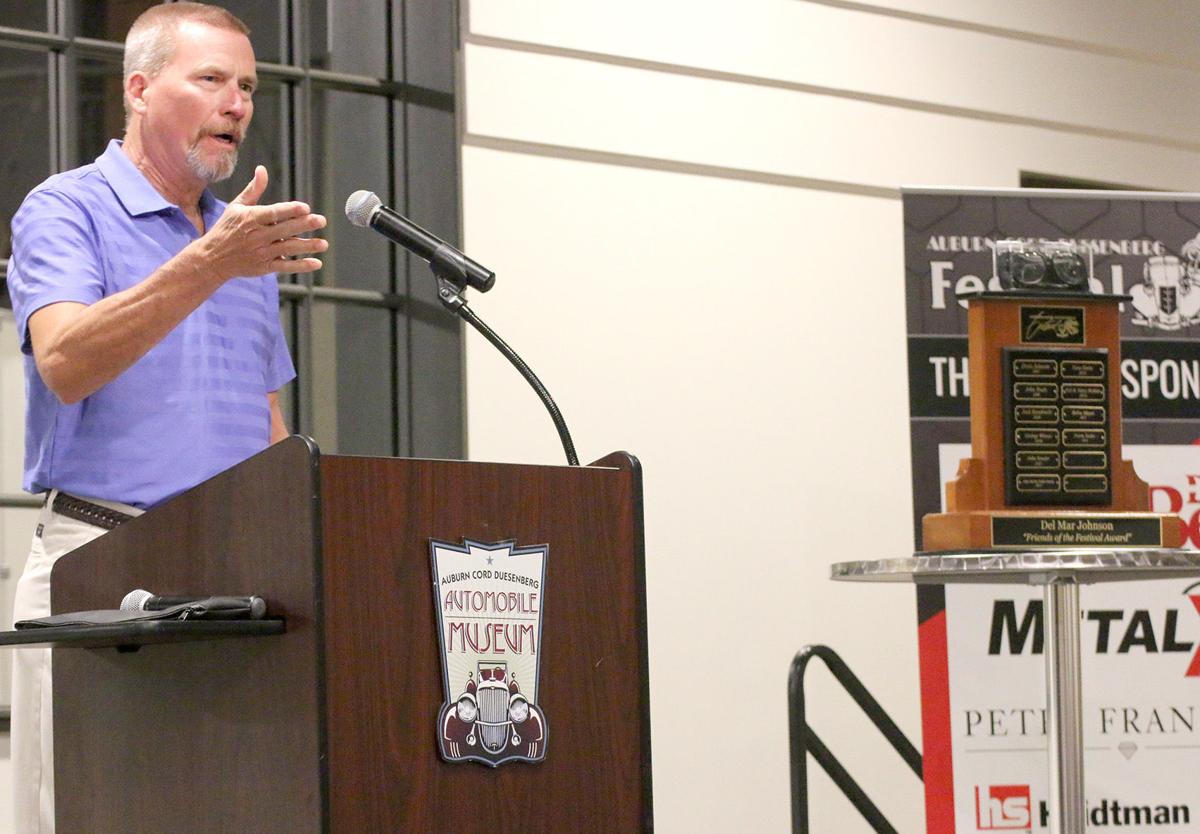 Auburn native Greg Schlosser was presented with the Del Mar Johnson Friend of the Festival Award during Thursday’s ACD Festival kick-off luncheon at the ACD Museum. The luncheon marks the return of the Hoosier Tour participants. This year’s tour took participants to Findlay, Ohio. 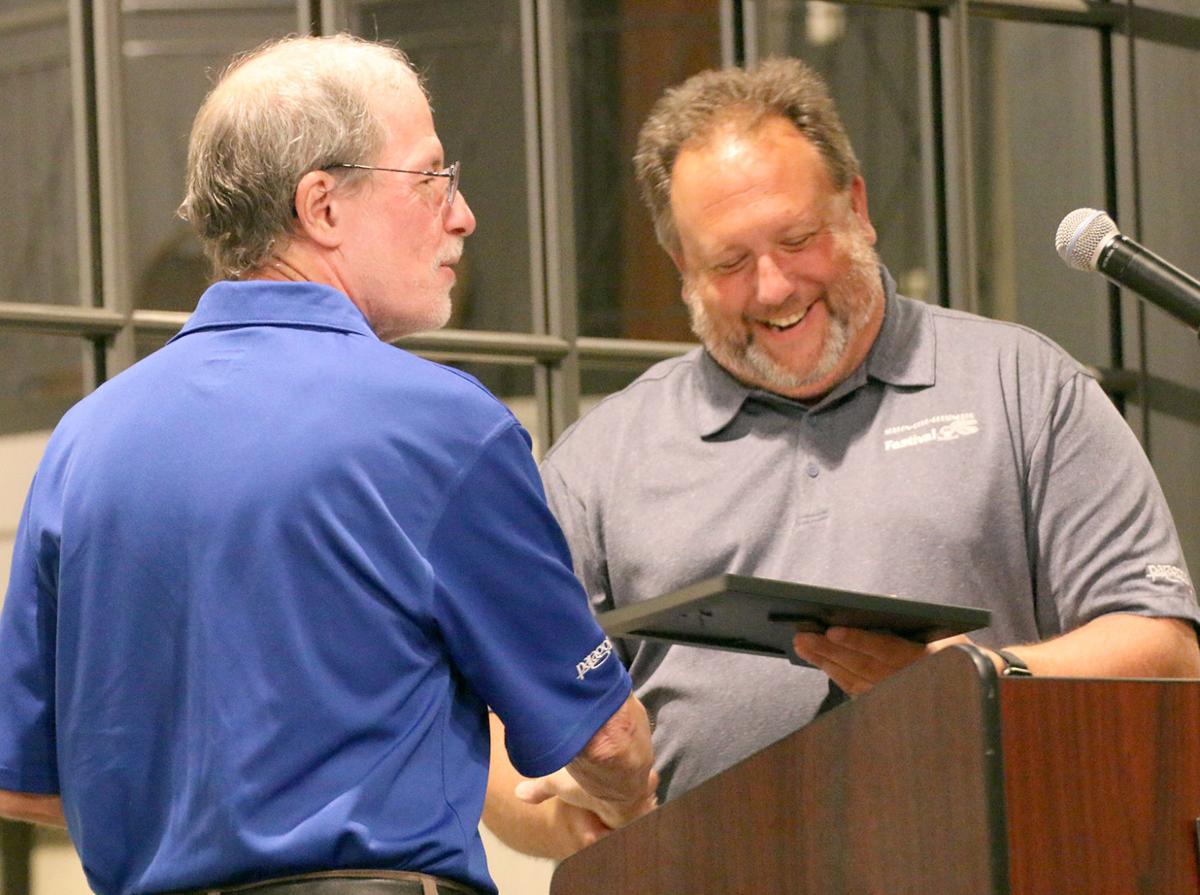 Dave Kurtz, retired editor of The Star presents The Star Appreciation Award to Mike Payne during Thursday’s kick-off luncheon at the ACD Museum. 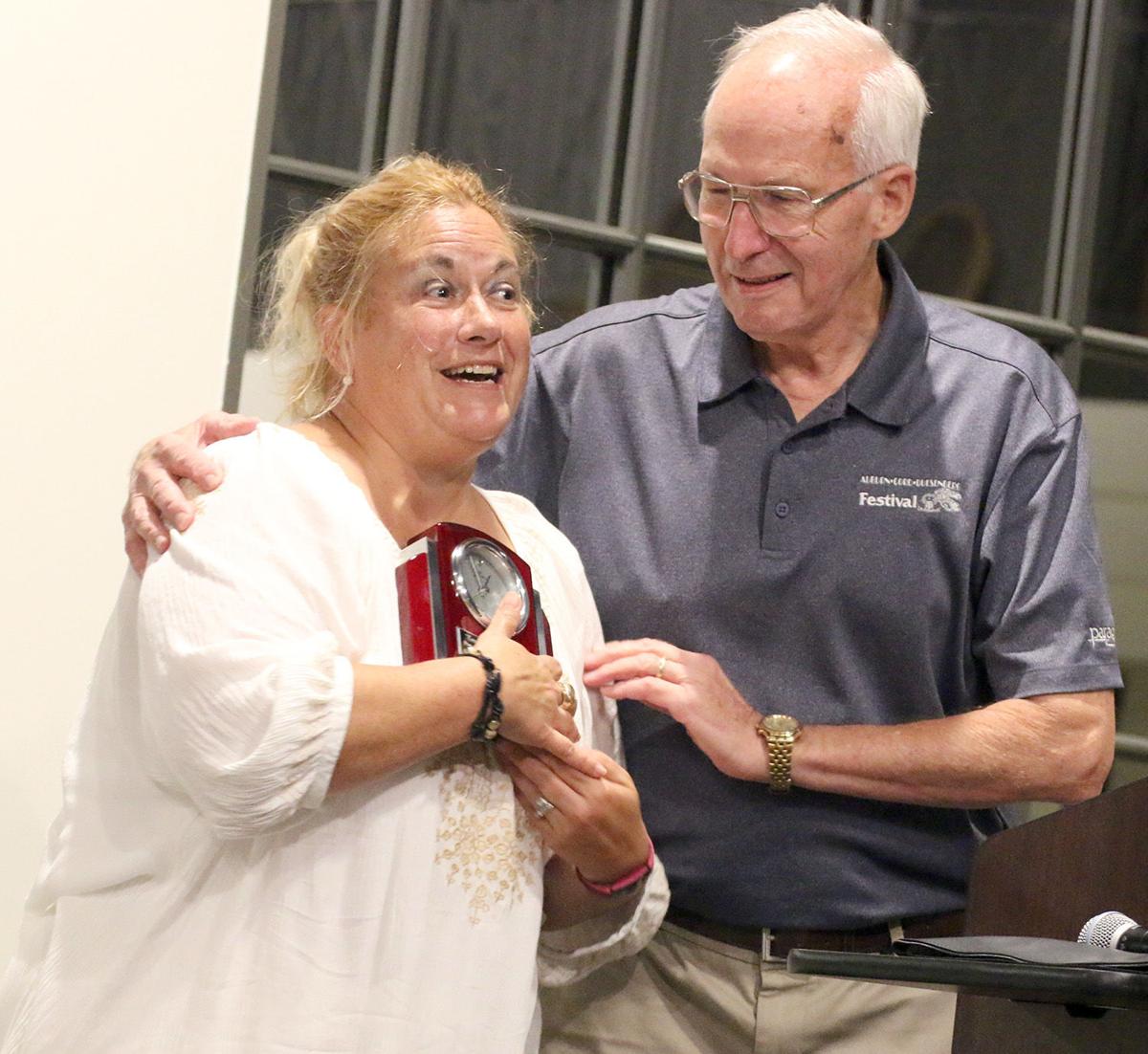 Gretchen Frownfelter, of Fishers, was awarded the Bob Butler Hoosier Tour Award during this year’s Auburn Cord Duesenberg Festival Kick-Off luncheon. Thursday’s lunch was sponsored by the Early Ford V-8 Foundation Museum. She is pictured with her daughter, Sage Grimpe standing next to the families 1931 Auburn Speedster 898.

Auburn native Greg Schlosser was presented with the Del Mar Johnson Friend of the Festival Award during Thursday’s ACD Festival kick-off luncheon at the ACD Museum. The luncheon marks the return of the Hoosier Tour participants. This year’s tour took participants to Findlay, Ohio.

Dave Kurtz, retired editor of The Star presents The Star Appreciation Award to Mike Payne during Thursday’s kick-off luncheon at the ACD Museum.

AUBURN — Three mainstays of the Auburn Cord Duesenberg Festival and an Auburn native who is carrying on her family’s ACD tradition received awards at the festival’s kickoff luncheon Thursday.

The 65th-anniversary festival shifts into high gear with dozens of auto-related events scheduled for today and Saturday.

The event traditionally begins with a Thursday luncheon in the Auburn Cord Duesenberg Automobile Museum — originally the headquarters for the Auburn Automobile Co. that built the classic cars the festival celebrates.

Mayor Mike Ley greeted the 100-plus guests — many of them ACD car owners — and pledged that the festival will continue to grow.

“In years to come, you’re going to be more impressed with what you see in and around this community on this special weekend,” Ley said.

The luncheon annually features four special awards. On Thursday, three went to members of the festival committee‘s board of directors.

Schlosser couldn’t remember exactly when he joined the festival’s board, but said he knows it was more than 35 years ago.

Schlosser already had been active as a member of a local Corvette owners’ club that was assisting with festival details at the time. His involvement grew deeper at the invitation of the late Al Gengnagel of Auburn, a classic-car enthusiast.

“He knew I was interested in cars, so he asked me to join the festival,” Schlosser said.

Current festival board president Mike Boswell called Schlosser “the go-to guy when you need something downtown” for festival events. He described Schlosser’s patience in efforts to keep the event’s aging former stage in working condition.

Robert Probst said when he joined the festival board 20 years ago, he was advised to “ask Greg what to do.”

Probst’s long service to the festival was honored when Kari Ackerman presented the “Time for Auburn” award in memory of her late father, Jack Randinelli, one of the festival’s founding fathers.

Probst “will do anything and everything for you,” Ackerman said.

Probst recalled how Mr. Randinelli invited him to become involved with the festival. They met because fellow Kendallville resident Bob Butler introduced him to the Auburn Cord Duesenberg Automobile Museum’s “pit crew” of volunteers who help maintain the museum’s cars.

“Something connected with him is truly an honor,” Probst said about Mr. Randinelli.

Another award is named for the late Mr. Butler. Judy and Tim Butler present the annual award, in memory of their husband and father, to someone who shares his enthusiasm for the festival’s Hoosier Tour.

This year’s choice, Auburn native Gretchen Frownfelter, traveled from Fishers with her family’s 1931 Auburn Speedster and 1936 Auburn sedan, both owned by her late father, Greg.

“This means a lot to me. My dad would be super-proud of me,” Gretchen Frownfelter said.

Every year since 1980, The Star newspaper has presented an award to honor a local festival volunteer.

This year’s choice, festival board member Mike Payne of Auburn, is “a quiet stalwart supporter, organizer, leader, and worker behind the scenes of many festival events throughout the year, not just during the festival,” said a person who nominated him.

“We’ve got a great team at the festival — all volunteers,” Payne said. “We have a lot of fun doing this, and we hope you do, too. We’re pretty proud to carry on this fine tradition of the festival and the Labor Day weekend, and we’re going to keep it going strong for a long time.”

The luncheon program included reports from executive directors of the city’s three automotive museums and the festival itself.

Festival director Leslie Peel mentioned that Saturday’s Parade of Classics at 1 p.m. will be live-streamed at acdfestival.org. She said Saturday evening’s Fast and Fabulous display of modern “supercars” in downtown Auburn will be “bigger and better than usual.”

ACDA Museum executive director Brandon Anderson noted that the museum marked its 47th anniversary in July. He said its 1921 “Castle” Duesenberg — the first one produced — will be on display in the Cars at the Capital show Sept. 17-23 on the National Mall in Washington, D.C.

Dave Yarde, executive director of the National Auto and Truck Museum, invited people to see its new exhibits, including “the newest Auburn dealership” — a replica 1930s dealership inside the museum.

Josh Conrad, executive director of the Early Ford V-8 Museum, described the 12-year-old museum’s growth in size and membership. When a second addition opens next year, it will be more than six times its original size.

He said the Ford museum started with 340 members, adding, “We now have over 1,300, and we signed seven up this morning.”

Conrad said he still stands by his recommendation to build the Ford museum in Auburn instead of Las Vegas.

“There is no town in this country like Auburn, Indiana,” he said. “It’s a perfect automotive Mayberry.”