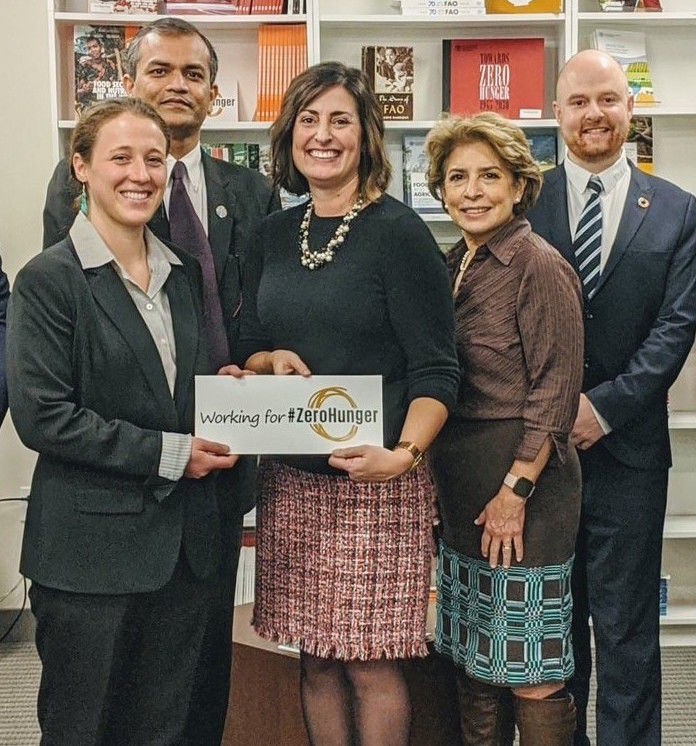 Beth Bechdol of Auburn, third from left and holding a sign that reads “Working for #Zerohunger,” is the new deputy director general of the Food and Agriculture Organization of the United Nations. Here, she meets with staff members in the agency’s office at Washington, D.C. She will be based at the headquarters in Rome. 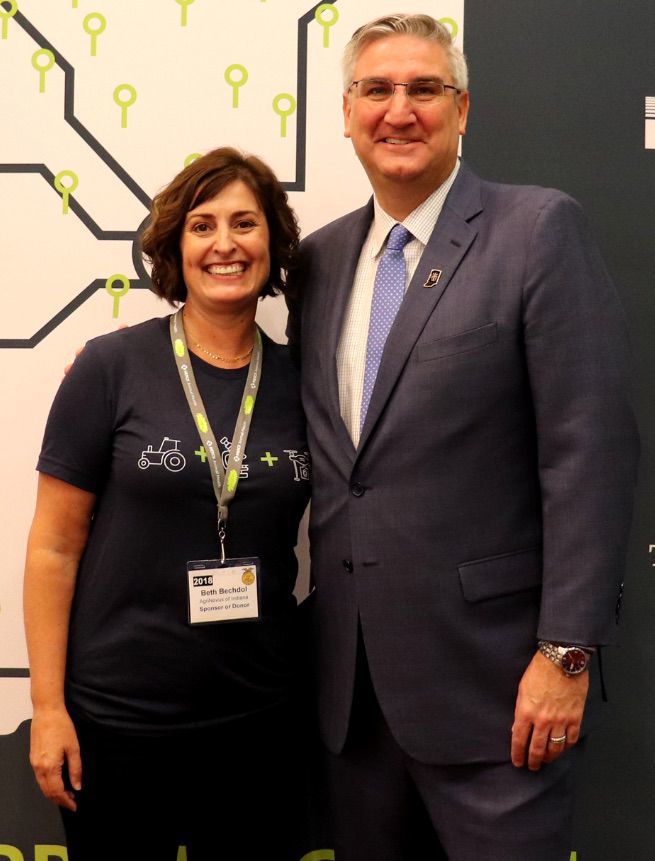 Beth Bechdol of Auburn, new deputy director general of the Food and Agriculture Organization of the United Nations, meets with Indiana Gov. Eric Holcomb. “The state of Indiana will forever appreciate Beth’s longtime leadership here at home, and we’re equally proud of her new assignment abroad in such a globally important role,” Holcomb said.

Beth Bechdol of Auburn, third from left and holding a sign that reads “Working for #Zerohunger,” is the new deputy director general of the Food and Agriculture Organization of the United Nations. Here, she meets with staff members in the agency’s office at Washington, D.C. She will be based at the headquarters in Rome.

Beth Bechdol of Auburn, new deputy director general of the Food and Agriculture Organization of the United Nations, meets with Indiana Gov. Eric Holcomb. “The state of Indiana will forever appreciate Beth’s longtime leadership here at home, and we’re equally proud of her new assignment abroad in such a globally important role,” Holcomb said.

AUBURN — A rural Auburn resident who grew up on a DeKalb County farm is taking charge of the battle to end world hunger.

In a few days, Beth Bechdol and her husband, Matt, will board an airliner bound for Rome. When they land in Italy, she will become deputy director general of the Food and Agriculture Organization of the United Nations on March 9.

This from a woman who took no interest in an agricultural career when she left home for college 30 years ago.

Now, Bechdol said, her mission will be “to get our world to zero hunger.”

To pursue that goal, Bechdol will draw on her experiences over the past quarter-century in Washington, D.C., and Indianapolis, where she currently leads AgriNovus Indiana.

The nonprofit AgriNovus serves as Indiana’s initiative “to promote and accelerate the growth of the agbiosciences sector,” its website says.

AgriNovus aims to make Indiana a Silicon Valley for agriculture — “a place where magic happens … where technology is built,” Bechdol said.

She believes the United Nations agency hired her because of her focus on innovation, science and technology, and because the Food and Agriculture Organization was looking for a younger, female leader.

Bechdol was not seeking a new job when the UN came calling. She was contacted by a former colleague at the U.S. Department of Agriculture, where she worked from 2002-2005.

Her colleague had led the Food and Agriculture Organization as its director general from 2008-2010, and he was helping FAO in its search for a deputy director.

Bechdol interviewed for the job twice through Skype video conferences. The U.S. Department of Agriculture, U.S. State Department and White House supported and promoted her as a candidate, seeking to place an American in the key job.

She received the news that she had been hired on Thanksgiving morning, she said.

Bechdol will work as one of three deputy directors for the FAO’s newly elected director general, who is beginning a four-year term leading a team of 11,500 employees in 130 nations.

Bechdol will oversee a variety of programs in economic research, statistics and data about world agriculture.

She also will be in charge of emergency response, food aid and assistance to nations dealing with famine or drought.

“To be able to find that way for food and agriculture to really change and impact lives in some really difficult parts of the world is incredibly daunting and incredibly overwhelming, but incredibly exciting, all at the same time,” Bechdol said.

“That’s a pretty inspiring and pretty exciting role, when your own personal background is so closely tied to this industry,” she said.

Bechdol did not always embrace such a future, however.

In one sense, her new post makes a natural fit. She was raised on a grain farm northwest of Garrett, started by her Brechbill family ancestors in the mid-1800s.

“Growing up here, I never, never contemplated a career in agriculture,” she said.

“I was probably a pretty horrible teenager who had no interest in a farm — didn’t like the fact that we lived in a rural part of the community and all my friends lived here in town,” she recalled.

“I whined and complained about having to help bale hay,” she said, and she participated in 4-H only as “a family expectation.”

She did not join in the FFA youth agriculture organization at DeKalb High School. Ironically, she later would lead the $20 million annual fundraising campaign for FFA, serve as chair for the National FFA Foundation Board of Trustees and receive an Honorary American FFA Degree.

Before she learned to appreciate agriculture, Bechdol said, her “incredibly nurturing” parents, Phil and Maxine Brechbill, allowed her to try tennis, speech contests and playing the oboe in the band.

They told her to “go pursue the things you want to pursue — and that was not farming, and not agriculture,” she said.

Her high school speech coach, the late Gerry Nagel, encouraged her to think about studying international affairs. She enrolled in the Georgetown School of Foreign Service in Washington, D.C.

After earning her Georgetown degree, Bechdol began to realize that food and agriculture involve more than farming, she said.

She earned a master’s degree in agricultural economics at Purdue University, then continued her career in Washington, working for the USDA and former U.S. Sen. Richard Lugar of Indiana.

The second chapter of her career brought her back to Indiana. She served as deputy director for the state Department of Agriculture from 2005-2007, then 11 years as director of agribusiness strategies at the Ice Miller law firm, overlapping with her role as founder, president and CEO of AgriNovus Indiana since 2015.

Bechdol returned to Indiana for a personal — not professional — reason, when her mother received a terminal health diagnosis.

“The lesson in that is: Your own plans will, very many times over, get thrown off course, but you have to respect and be able and willing to make those changes, when they are the right changes,” she said.

Bechdol and her husband “both figured out new opportunities for ourselves” in Indiana, she said. Matt, also a graduate of DeKalb High School, today is president of GeoSilos Inc., an agriculture technology consulting firm.

From a personal standpoint, their decision to move to Rome was “easier than you might expect,” Beth Bechdol said.

“In early August, we had just put on an airplane our one and only daughter to go start college in the United Arab Emirates,” she said.

Grace Bechdol, 18, is in Abu Dhabi, studying Arabic, social science and public policy through a program of New York University. Now, she will be only five hours away from her parents in Rome, instead of a 15-hour flight to Indiana.

“It all has sort of come in an incredibly full-circle way,” Beth Bechdol said about her future.

The challenges of her new role “are heavy lifts” that will require persistence, creativity and an entrepreneurial mindset, she said.

“Why can’t we think more creatively about this set of problems and the work that we do and who else we can bring to the table to help us?” she asked. “That’s kind of how I operate.”

Bechdol sees her new job as “a perfect blend” of the first two chapters of her professional story in Washington and Indiana.

“I have no idea what chapter three is going to bring,” she said, “but it’s really exciting.”

At AgriNovus, “We’ve been really successful here … in kind of redefining or recasting what innovation … scientific discovery and research and technology in agriculture really can mean,” she said.